Last week I got new watercolors. These are the Cotman Watercolours from Winsor & Newton. So far I have only had a little travel set (also Winsor & Newton), but while I enjoyed mixing the colors, I was still craving more. This studio set had been on my radar for about six months and after I had got a big order through my shop I decided to splurge on this.

First, I unpacked all the little half pans and painted a sample with each color to see what they look like when they have dried on watercolor paper. 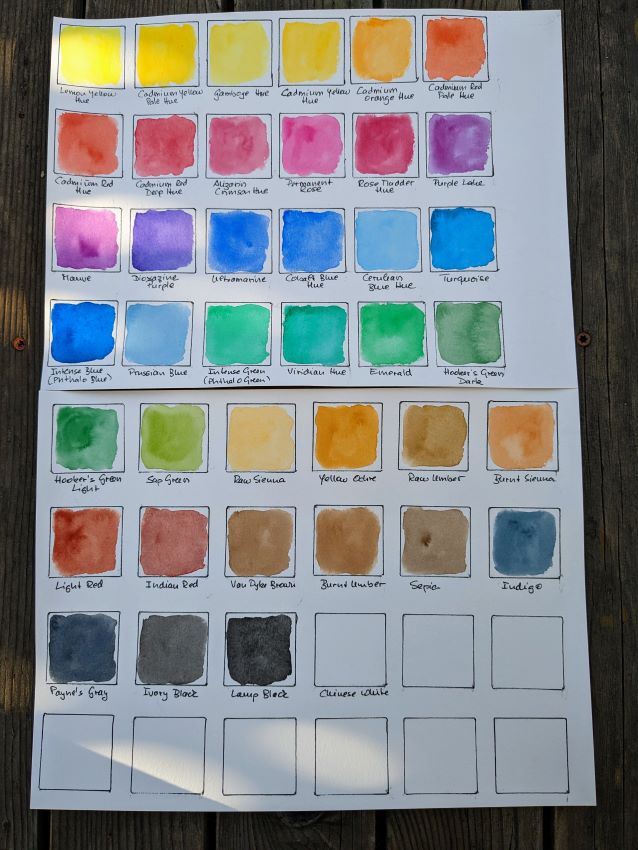 I'm still little experienced when it comes to watercolors, but I really want to learn how to use them. While I painted quite a bit with watercolors, I didn't really know what I was doing. Not that I know much more right now, but eventually I will. After all, my word of this year is "explore".

So I painted a tiny little piece because my fingers were itching to try out these colors. I used a stamp and simply colored it in, adding the chili peppers as a final touch. 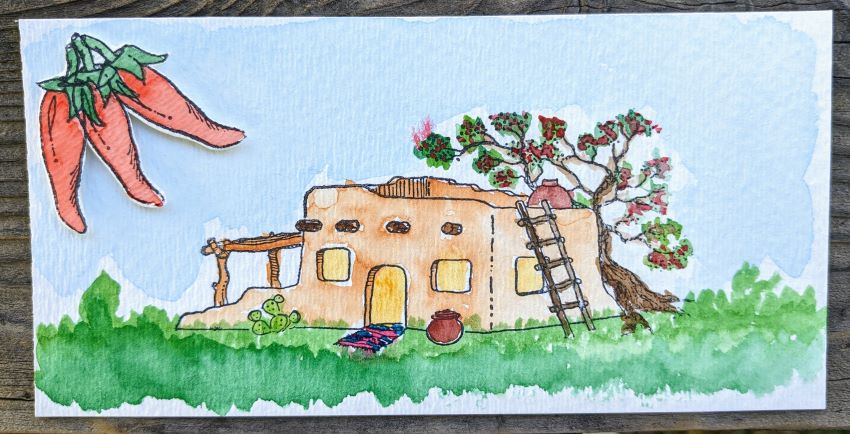 This is my art part for Rain's Thursday Art and Dinner Date. Now on to the dinner part.
There are still tomatoes and zucchini that I harvest from my garden. Last week I made veggie pasta with shrimp that I had marinated in sesame oil, smoked paprika and salt & pepper. Zucchini and tomatoes came from the garden plus Red German garlic from the garlic guy at the farmers market. 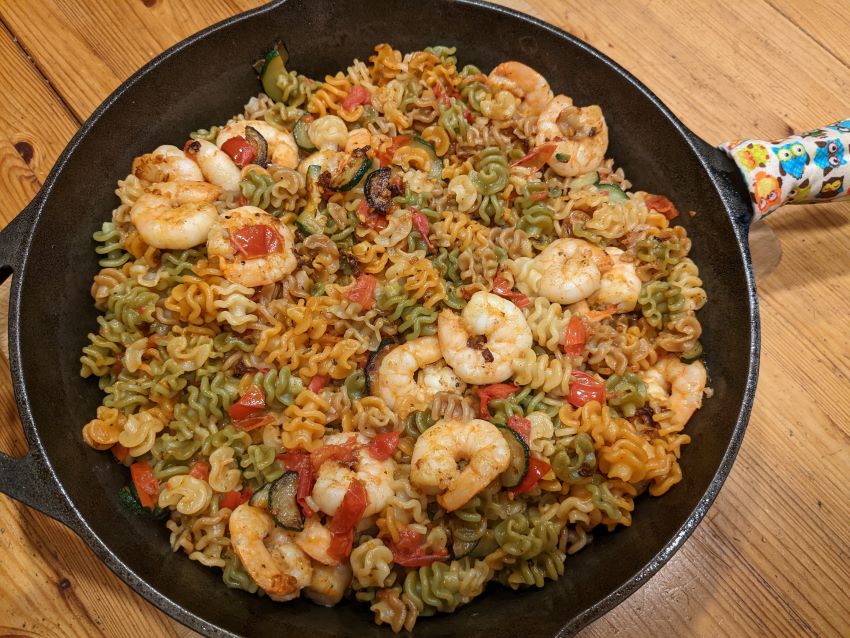 I had put a little chili sesame oil in it towards the end of cooking time to give it a bit of a kick - it was delicious! 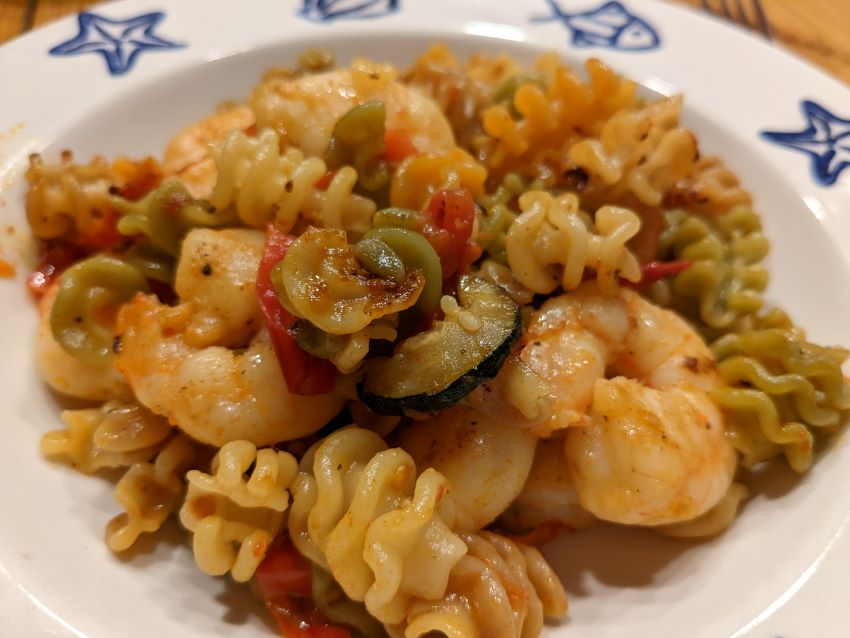 What are you cooking these days?

Love your water colour play and am looking forward to seeing more. And yes, that is a hint.
I am having leftovers tonight. Pumpkin and various beans, in a spicy coconut milk sauce.

Nice new colours! I still have the Schmincke set I had at school in England, although I have added a few new colours in the meantime. Have fun with yours, and keep cooking up such lovely meals! Hugs, Valerie

I have no doubt that you are going to have lots of fun experimenting with your new watercolours, Carola. Be sure to show us the results often. Hugs - David

Good morning, I am a newbie with painting, but I went with Windsor Newton paintings-love them and their long history. Your dish looks soooo delicious

Your pasta dinner looks yummy! Of course, our gardens have been done for a while and the fall vegs have just started growing well. I've booked marked your Etsy page (didn't know it was there) for from xmas shopping later. Have fun with your watercolors.

Ohhhh it's always exciting to get new art supplies. Look what you created already. That is just excellent. Uhhhh when can I come for dinner. That meal looks sooo good. Have a great day today.

Wishing you good health, laughter and love in your days,

A ShutterBug Explores,
aka (A Creative Harbor)

It is so hard for me to resist a new watercolor pan, tube, or color. This looks like a lovely set. A tip you've probably heard a lot -- get decent paper. Watercolor works differently on different paper. 100 percent cotton is best. You'll get better bleeds, better color control. And you're going to have such a fun time!

That looks like a fun set of watercolors. I like your New Mexican looking piece. It came out great, and isn't it fun how you can do so many things with stamps? And your dinner looks delicious. I haven't made shrimp and pasta for a long time. And I have never heard of German red garlic. Have a great rest of the week Carola. Hugs-Erika

I like to dabble in watercolour, too, but know very little about proper techniques. Your new paints look very inviting.
Today I made some chicken broth from bones stored in the freezer, and also some creamy broccoli soup.

...I'm not sure what I like best, the box of watercolors or the shrimp and pasta. The shrimp wins out for me.

I can almost smell that delicious looking pasta dish. Your watercolour looks really wonderful! Have fun with the new set.

Love your new water colors ... lots of choices so you can color anything any color you want. I am like you. I enjoy water colors, but don't have any training in the best way or even various ways to use them effectively. I think your first attempt with your new paints is fabulous ... now on to the food. Oh my this Dinner Date addition to Rain's blog is causing me all kinds of cravings and hunger ... not something I really want, but do enjoy anyway. I love noodle dishes ... they are always so tempting and adding chili sesame oil really sounds good (how spicy is it?). I like spicy but I have a limit. Thai food is spicy and when my DIL cooks I can hardly breath in the kitchen because it is so spicy. Anyway, fun stuff, Carola ...

Andrea @ From the Sol

Hi Carola, I LOVE watercolours and there is something so satisfying about painting out swatches isn't there? I like half pans too as they last for such a long time, plus you can always refill them from tubes. I did just that a few weeks ago with my Sennelier set. Glad you got my postcard so quickly! You asked about the stamp on my page, just in case you don't see the reply I am posting it here too. It's a Mama Elephant stamp from a few year's ago but it's still available. https://www.simonsaysstamp.com/product/Mama-Elephant-Clear-Stamps-THE-CATS-MEOW-Set-MEPT358

Hi, Carola! What a lovely array of colors in your new watercolor paints. My mother loved to paint with watercolors. I like the adobe house you painted, especially how you created the green brush and grass around it. "Explore" is a great word for your year. Your shrimp dish looks scrumptious. We're in Vegas right now, so I am enjoying the freedom of not having to cook. I hope you have some time in this next week to enjoy painting with your new paints. Take care!

what a great-looking pasta dish you made! All the flavors sound wonderful.

Good for you, Carola, in treating yourself to the new watercolor set. Of course, we will be eagerly looking forward to your new art creations in the future. That dinner looked so good and the addition of shrimp can help any pasta and veggie dish. Now that fall weather is here, I am planning on soups served with homemade bread and salads. This weekend we had oven roasted veggies with sausage, potatoes and apples and also fettuccine with spinach sauce.