Spring Walk in the Cemetery 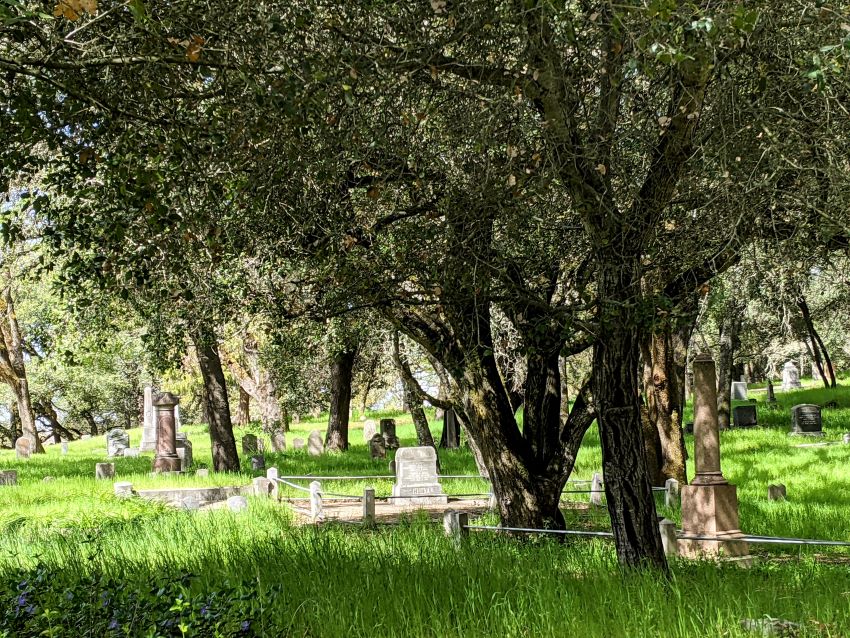 Our oldest cemetery, the Rural Cemetery, is only a ten minute walk away from my home. It's like entering a different world with old crooked trees, birds singing, soft paths and blissful shade. It's an oasis of calm and solitude. Now in spring there is an abundance growth of grasses - everything looks fresh, but soon they will turn brown and mowed so that they don't lend fuel to future wildfires. 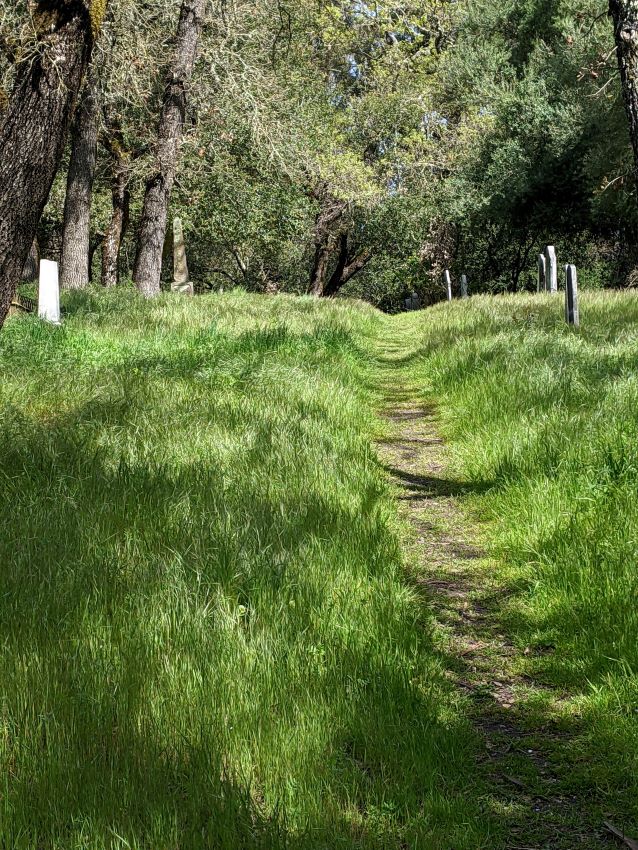 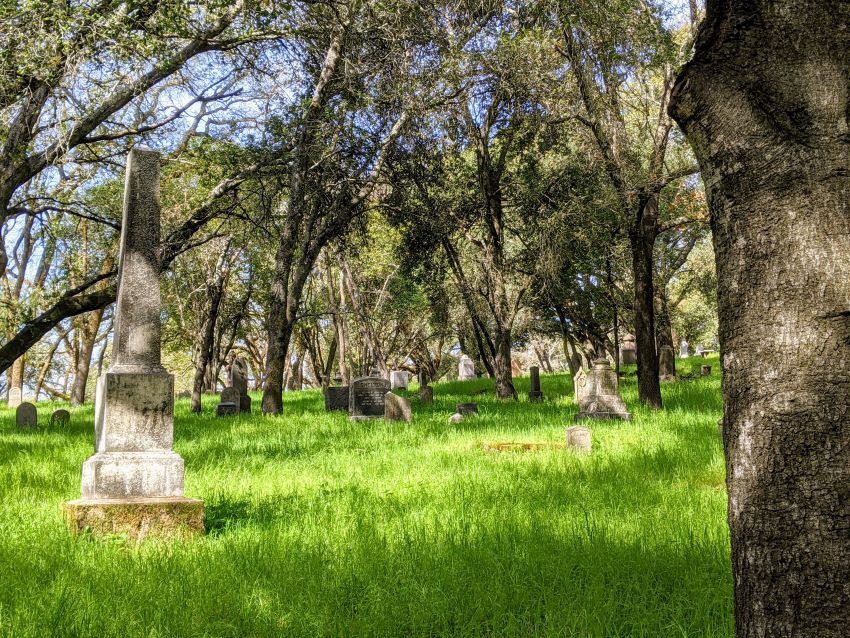 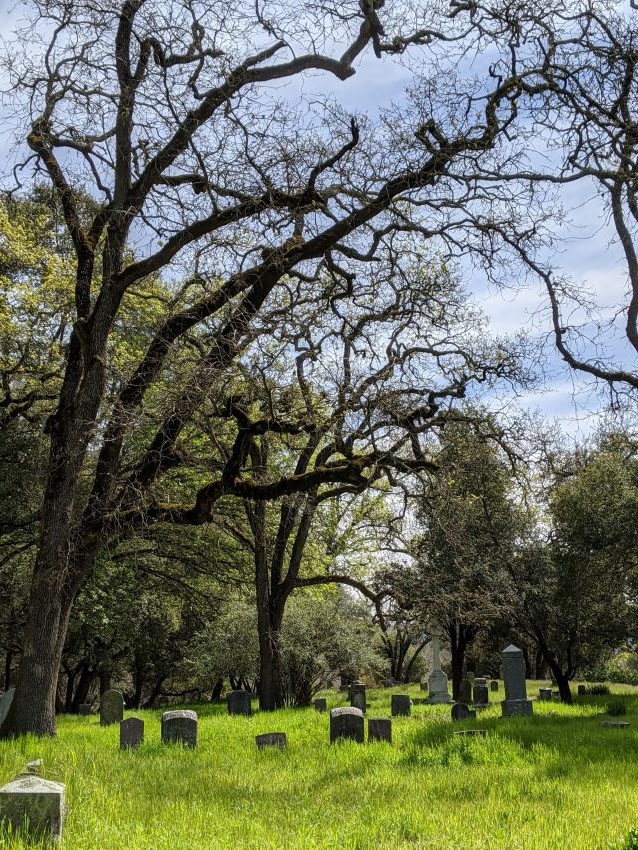 The old gravestones tell the history of my city, the names that are so well-known here. Many are beautifully decorated and sometimes small surprises can be found on them. 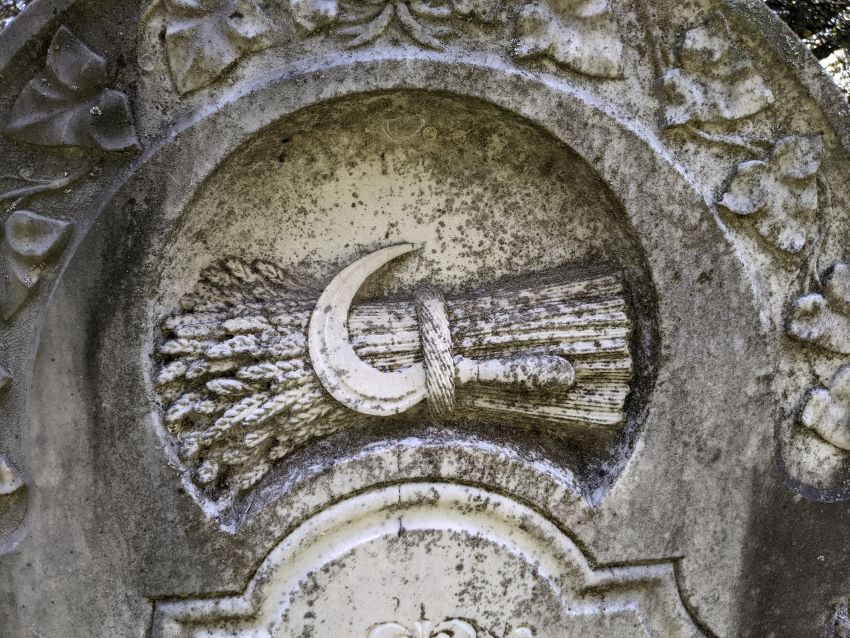 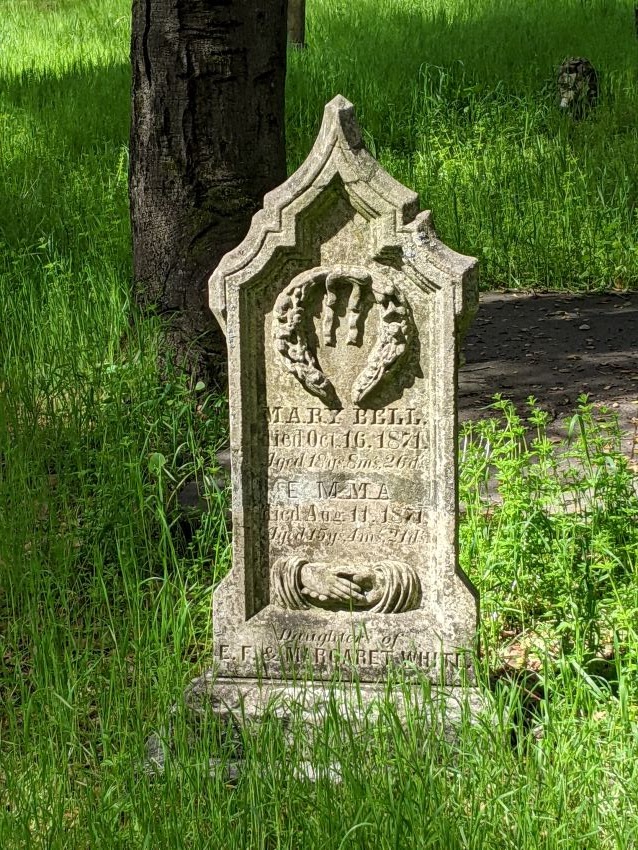 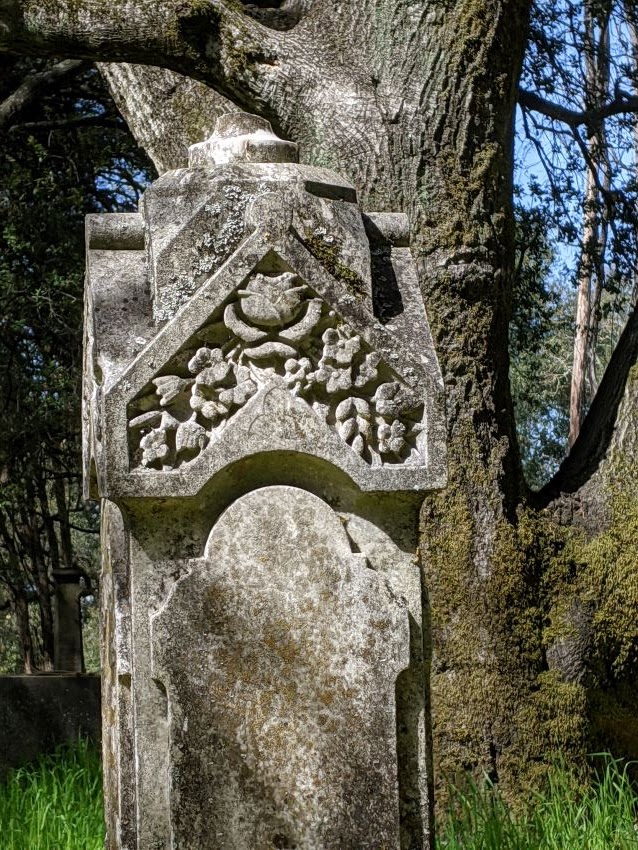 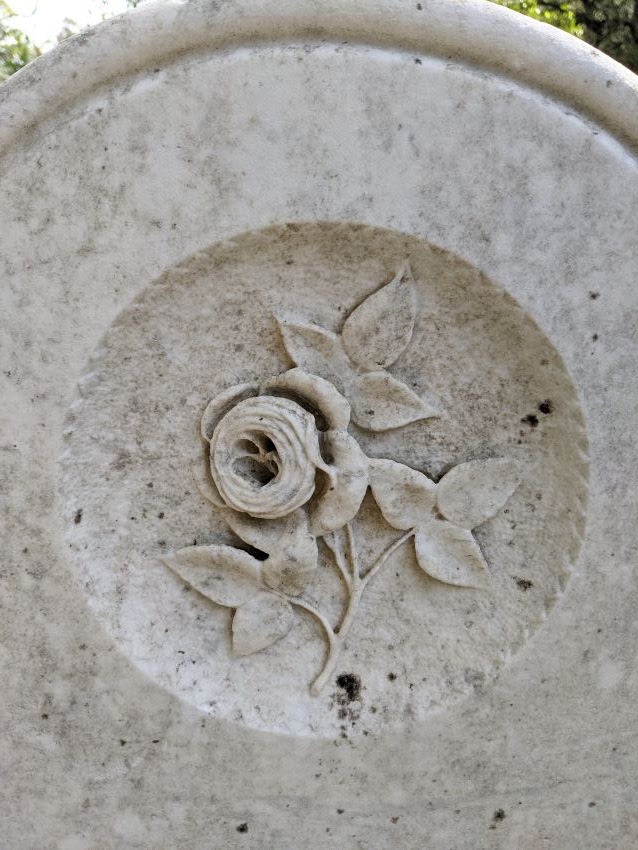 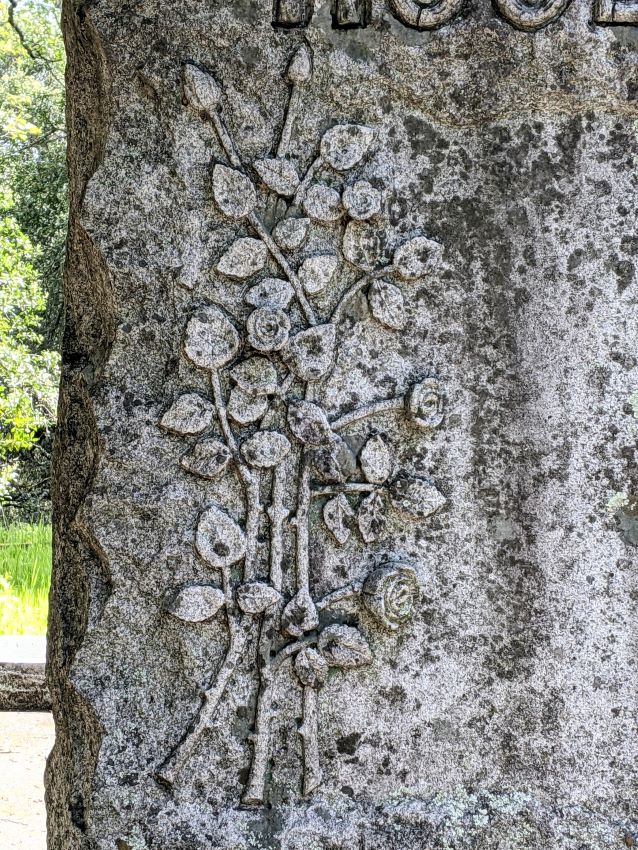 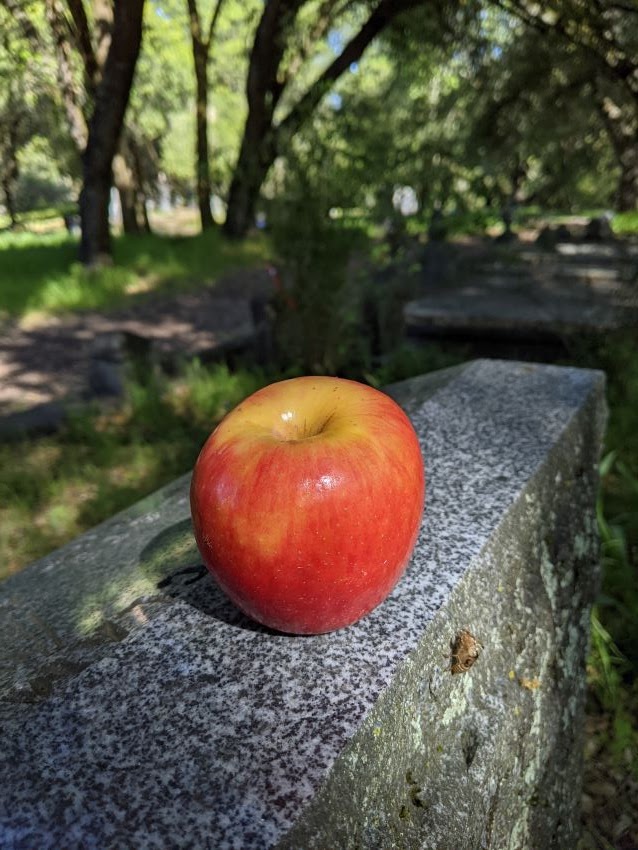 There are trees that can't keep it straight any longer, fences that broke down a long time ago nd every now and then there are flowers hiding near the gravestones. 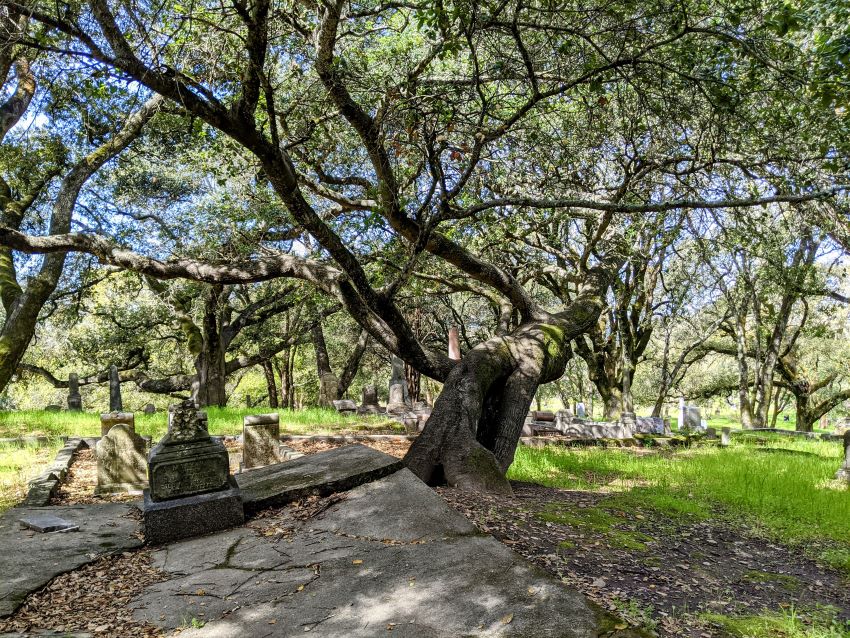 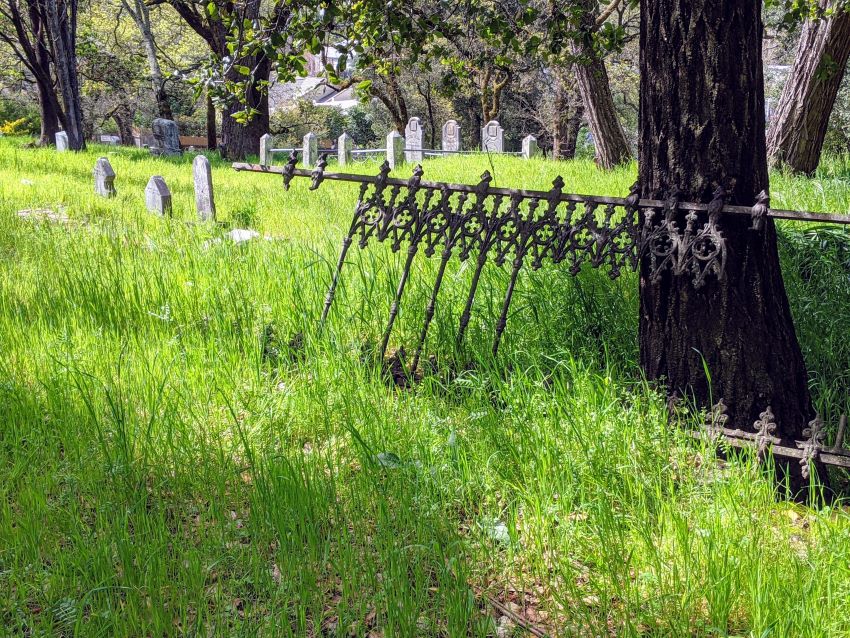 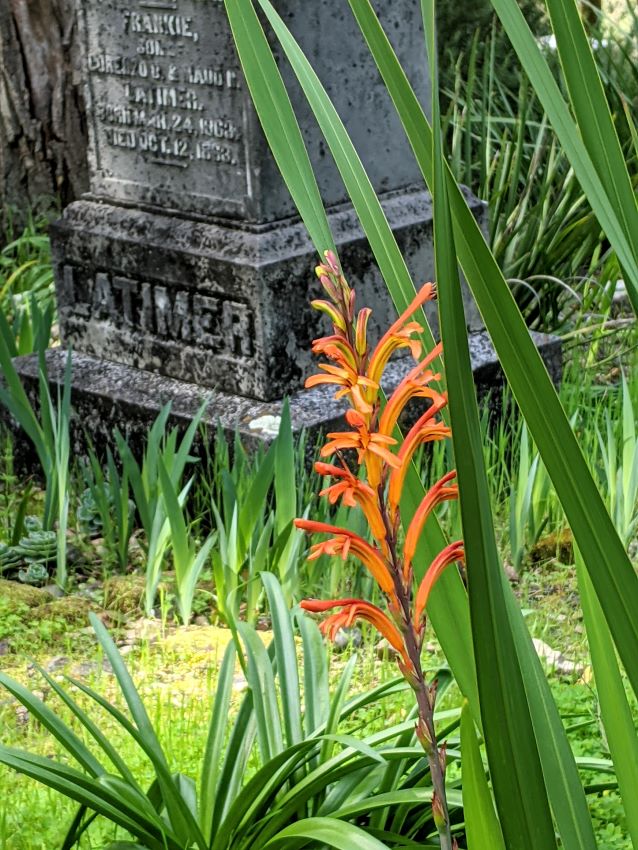 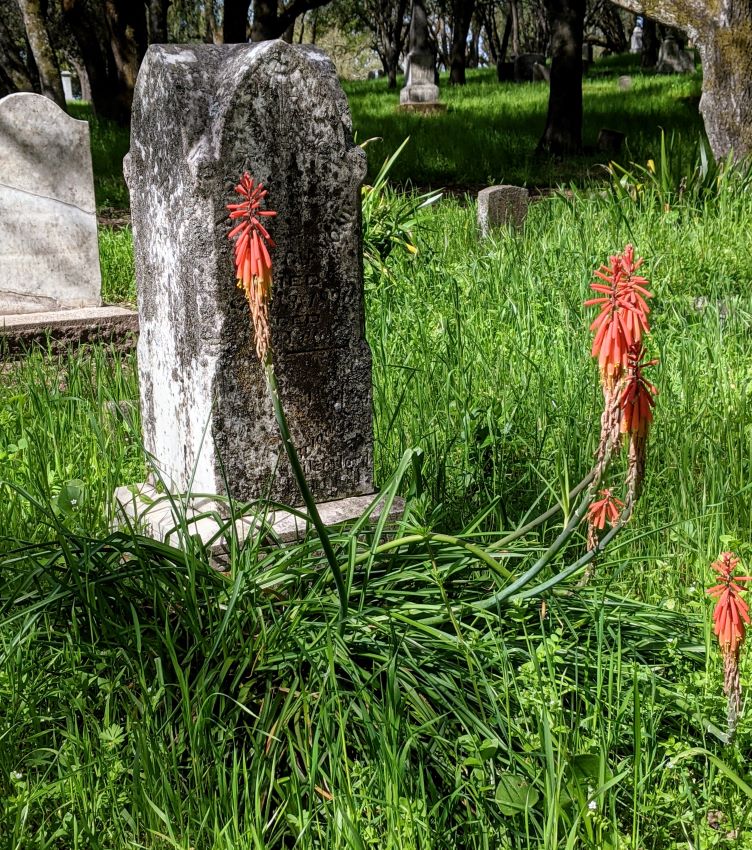 I simply love this place. What about you - do you like to visit cemeteries? 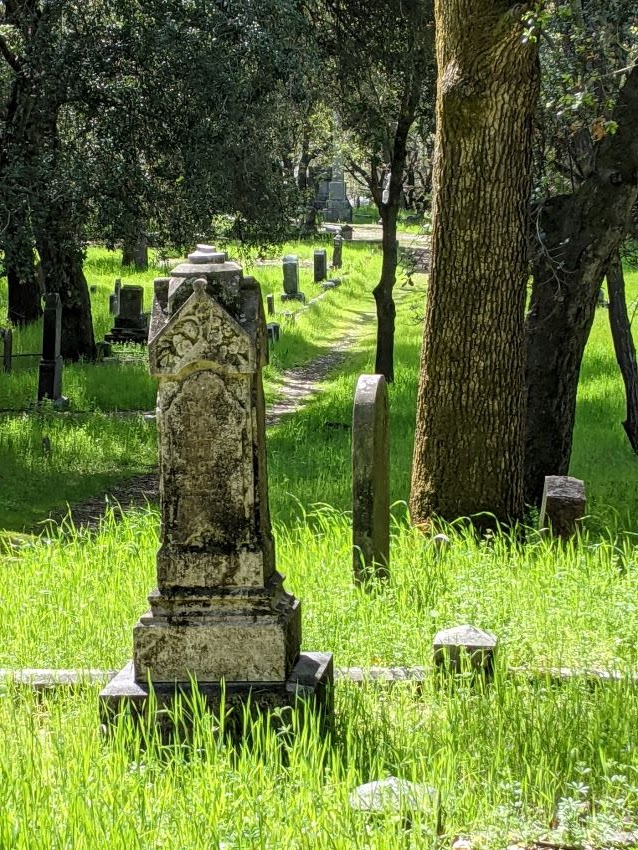 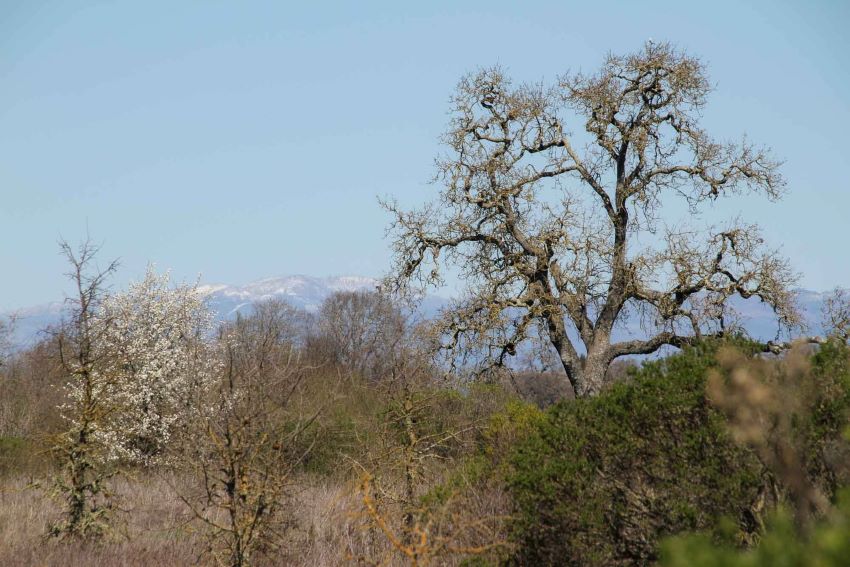 In my last post I promised to show some of the birds that I had seen during my walk in the laguna a couple weeks ago. It was a beautiful sunny day, but as you can see in the photo above, there was still snow lying on the hills. It's always intriguing to see flowering trees and fields down here and the snow capped hills in the background.

I know that there are quite some Western Bluebirds in the laguna, but I see them only rarely. This time, however, I spotted them every time I walked here. 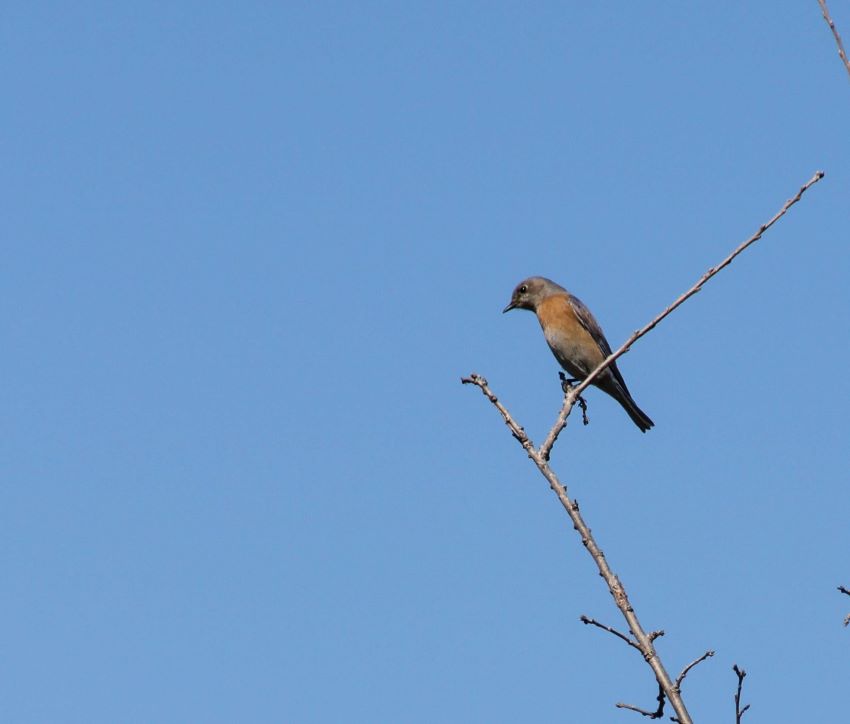 There were dozens of Song Sparrows in the bushes and grasses. These sparrows truly pay credit to their name - they have such a beautiful song. They may blend into their surroundings, but their singing gives their presence away. 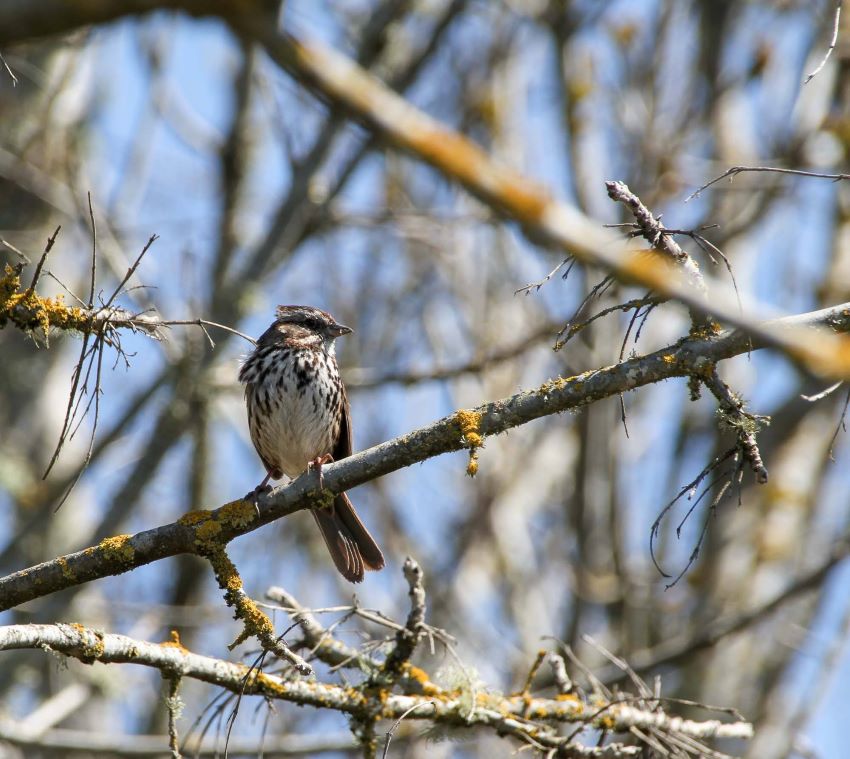 In the trees along the laguna I spotted so many herons that I stopped to count them. One tree was solely populated by Cattle Egrets, some Green Herons were visible, but most of all I saw Black-crowned Night-Herons. The male and female look alike, but it is easy to tell the juveniles apart. There were entire families roosting in the trees. 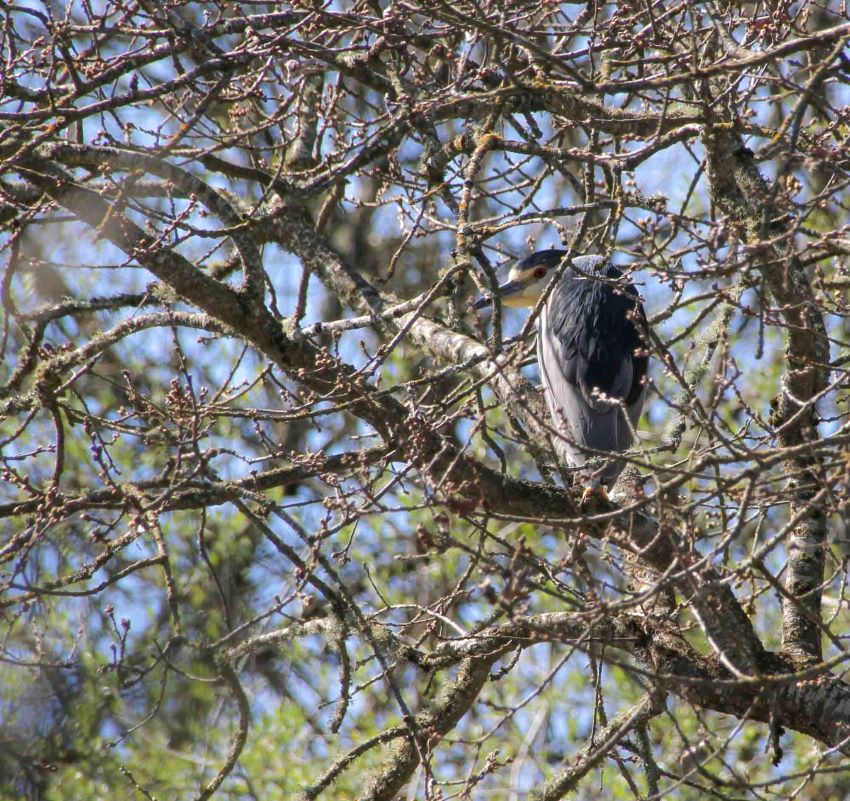 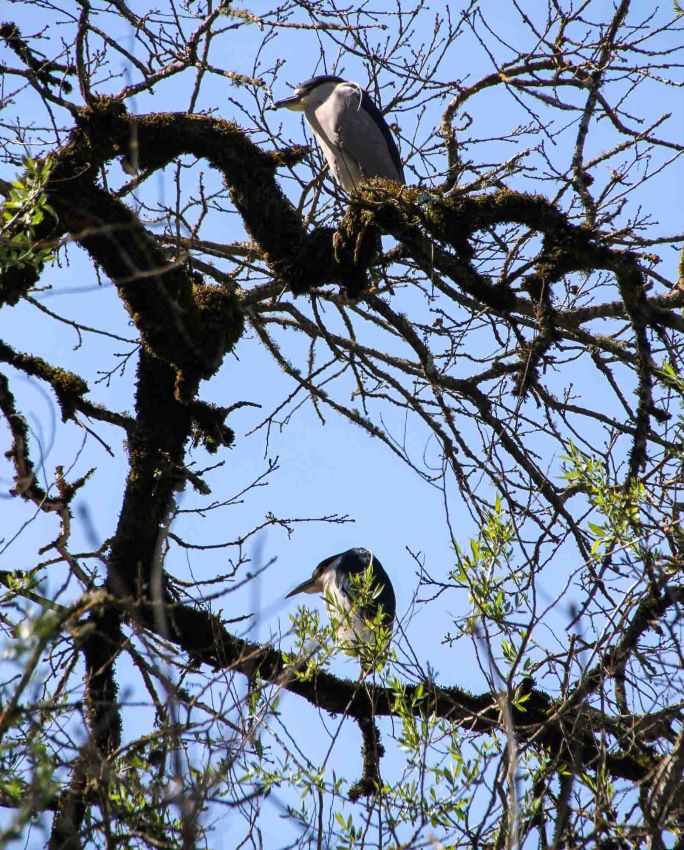 I love these guys!

The Red-shouldered Hawks were very active that day. Before I saw them I usually heard them, they have a very unique rather high pitched call. One of them was so kind to land in the tree near where I stood watching the Black-crowned Night-Herons. 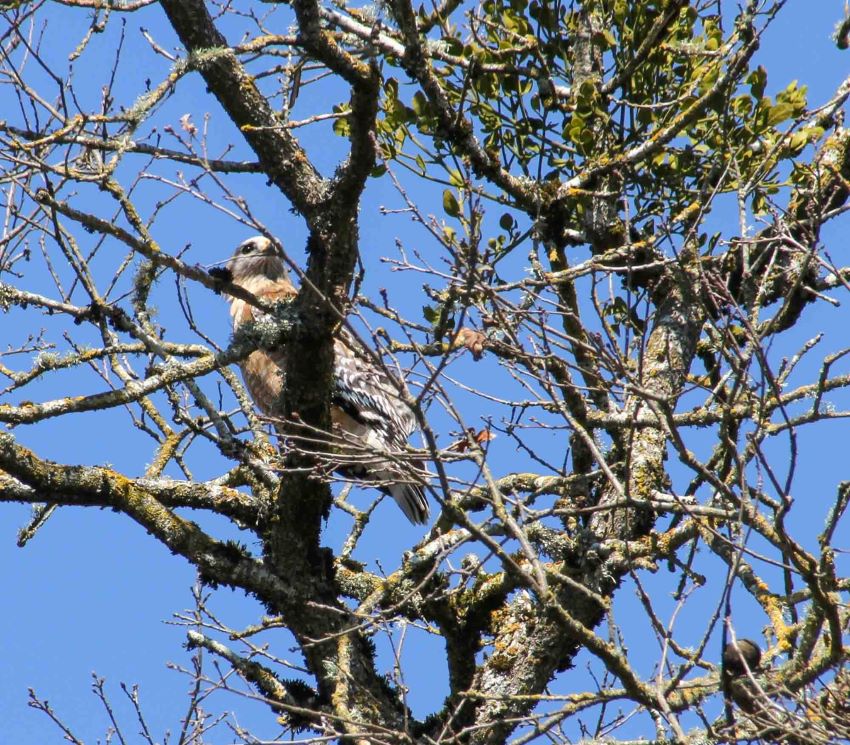 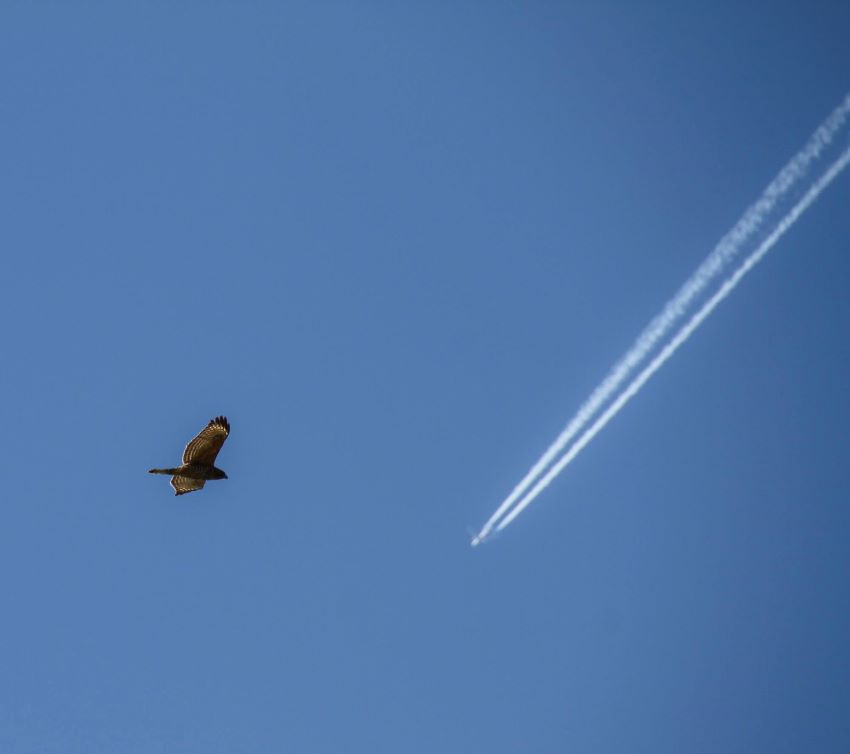 After my walk I stopped on the other side of the laguna - I always wanted to explore the area here and I finally did it. While I was happily taking pictures of trees in water I discovered some big white birds swimming in the distance. I first thought they were swans, but when I observed them more closely I though they were behaving differently from swans. I tried to get closer where they were, and when I finally could see them much more clearly I realized that they were American White Pelicans. 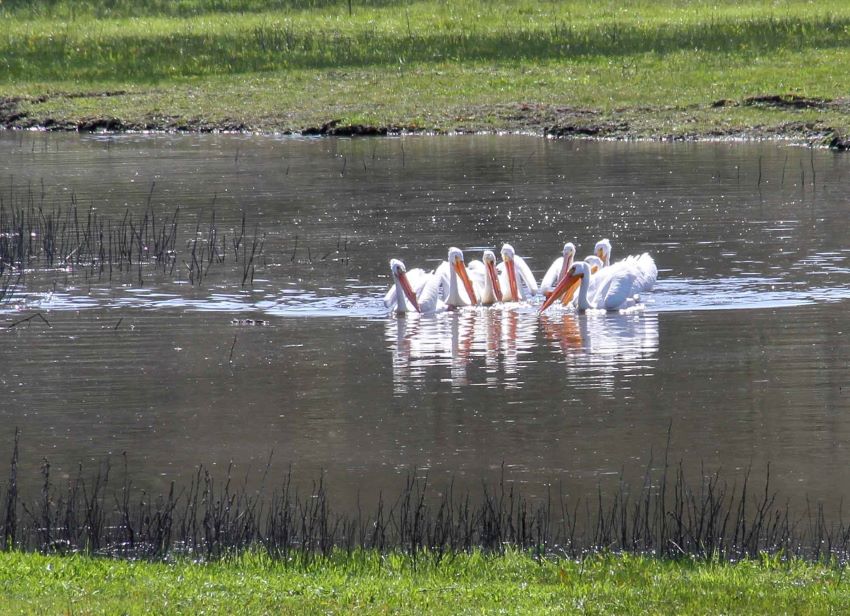 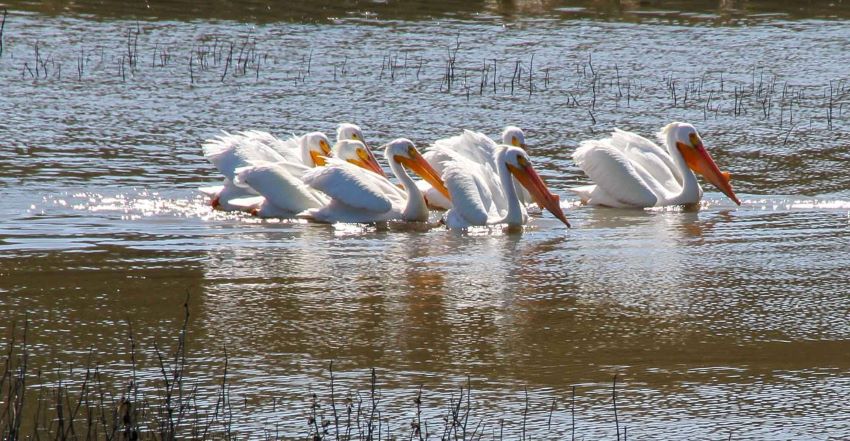 I was surprised to see them here. At the ocean I have seen hundreds of Brown Pelicans and I always thought we don't have White Pelicans in Northern California. Well, I stand corrected. This seems to be the farthest North they get in the winter - seeing them North of the Golden Gate is, indeed, very rare, and I think this was an extraordinarily special treat. Once in twenty years...

This was such a wonderful day in the Laguna that was complete after I had discovered the field of mustard on my way back. 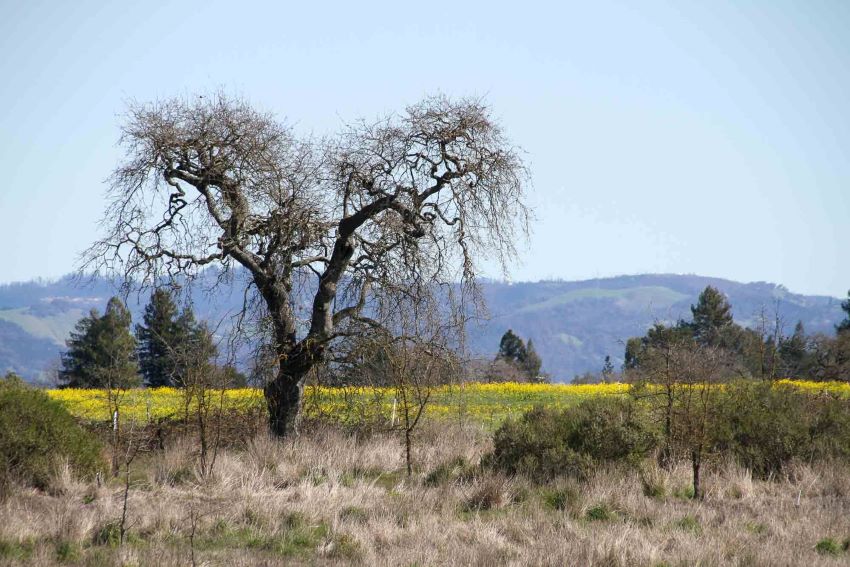