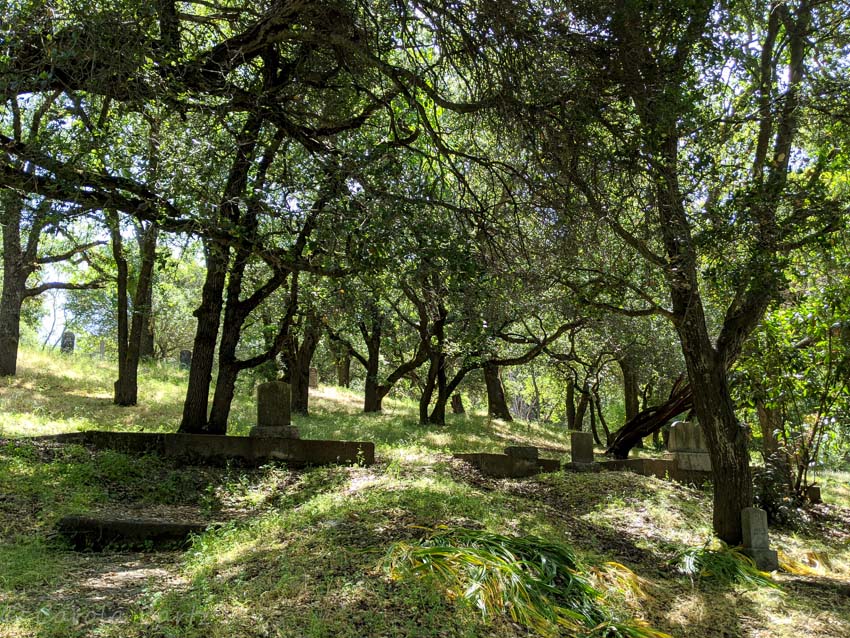 A few weeks ago our parks were re-opened. First the parking lots remained closed and only people who live in the vicinity of a park could access it by foot or bike.

My favorite parks are not in walking distance from my home. While I could access the lake by bike, the ride there is no fun at all on busy roads with no bike lanes. Even riding along more quiet neighborhood streets can't avoid the busy intersections.

But the old rural cemetery is close to our neighborhood. It was also closed, but now finally we were able to access it again. Of course there were rules in place, all of which make perfect sense. 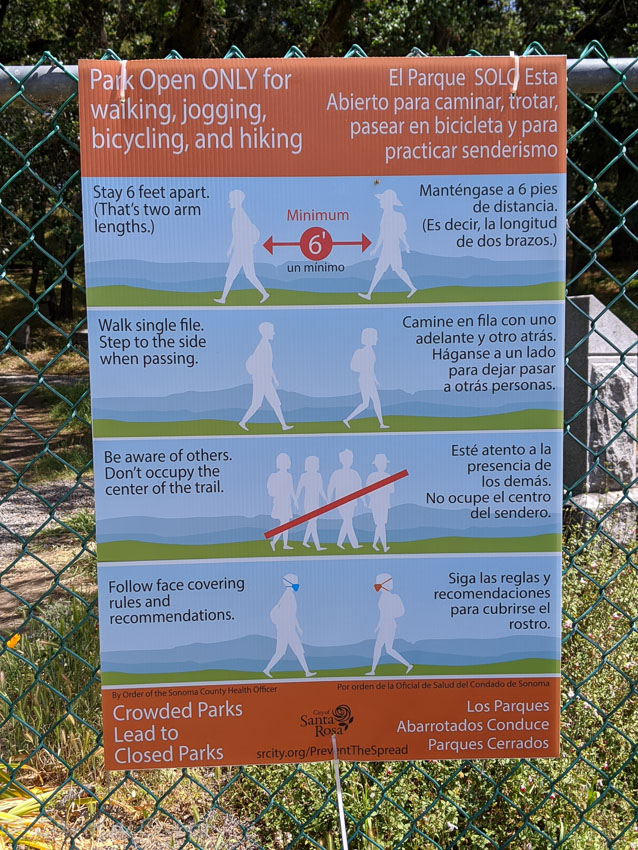 There was also another sign that was less comfortable... 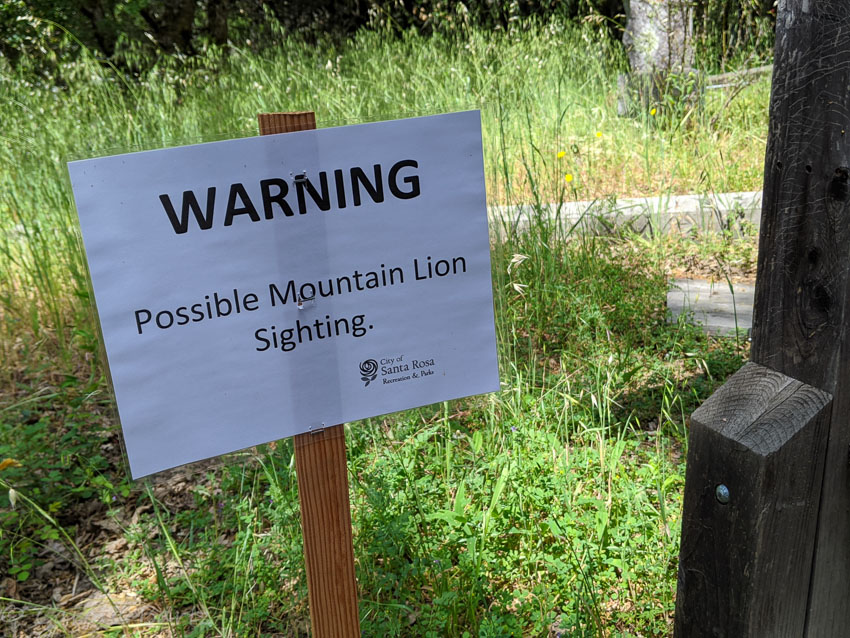 We live in cougar country and they have been spotted in our neighborhood, so I was aware of my surroundings and avoided the most remote parts of the cemetery.

After the long closure of the parks and the complaining of the people about it I had expected that the cemetery was crowded because people were so eager to get outside and enjoy some nature. But to my surprise I was almost the only one wandering the trails. 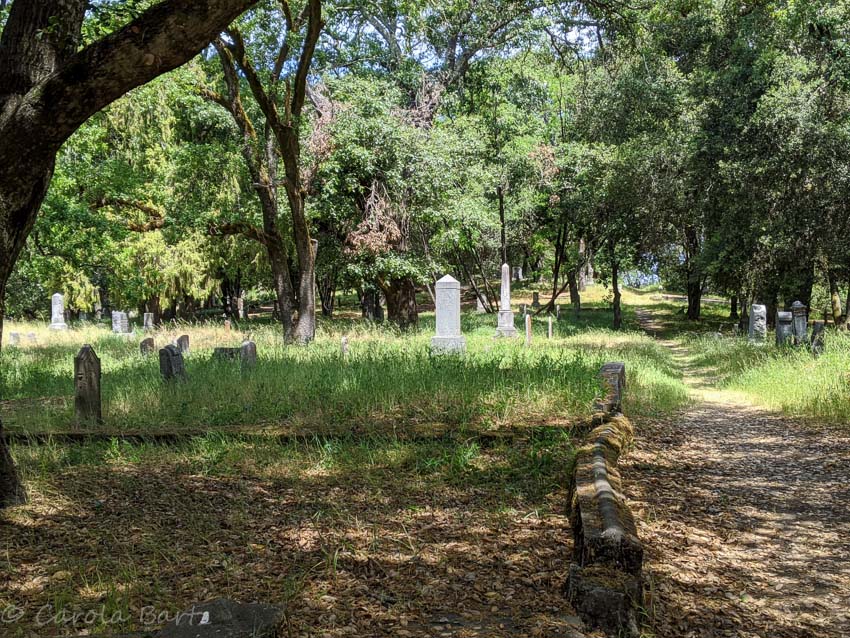 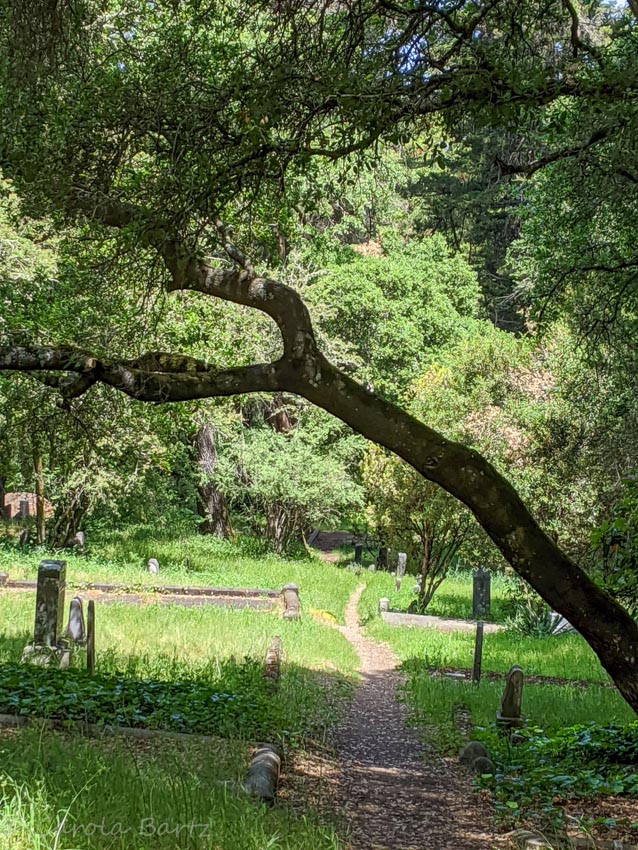 A small section of the cemetery had been turned into a native plants garden years ago. It was a bit overgrown but there were still beautiful flowers to discover. 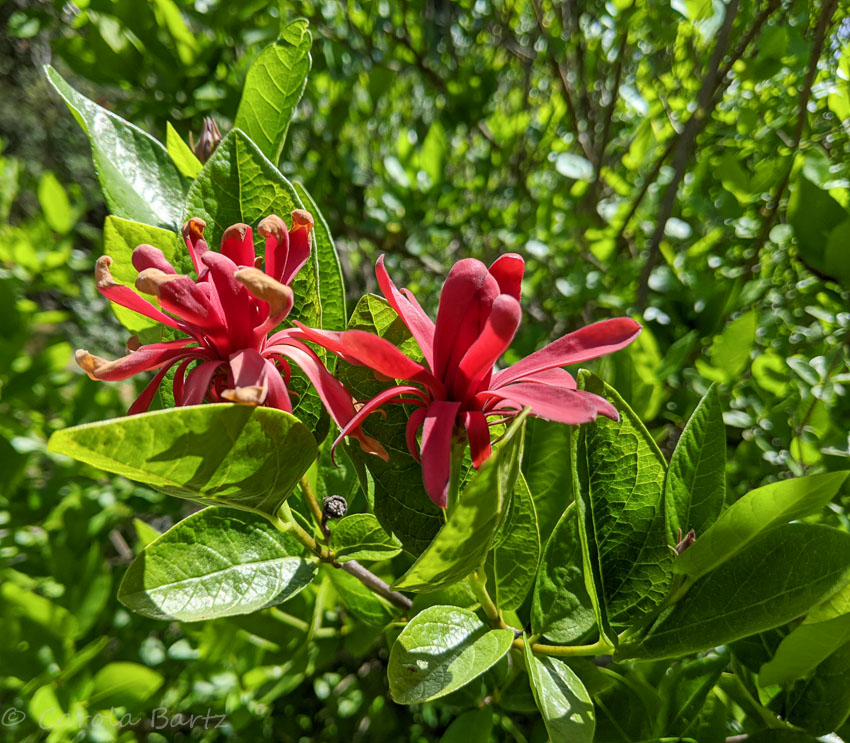 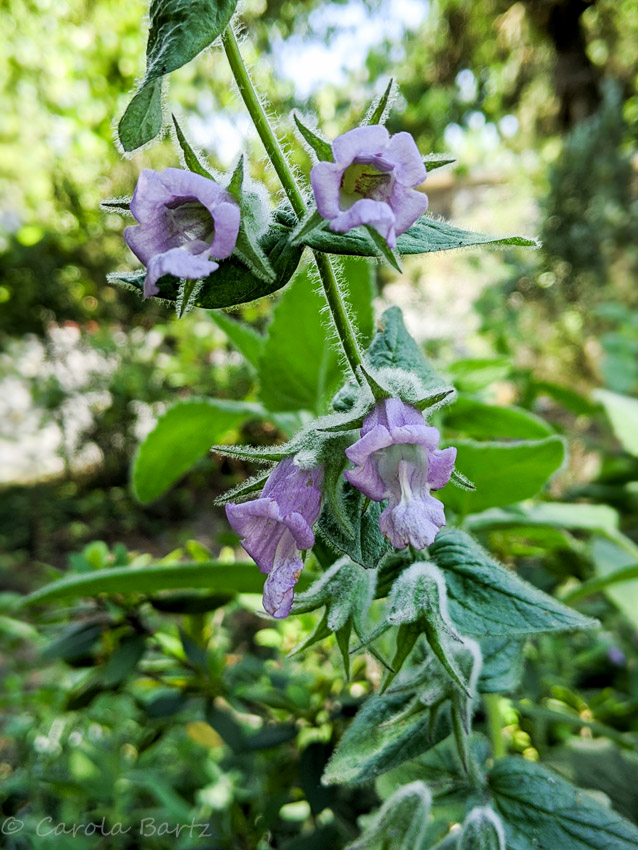 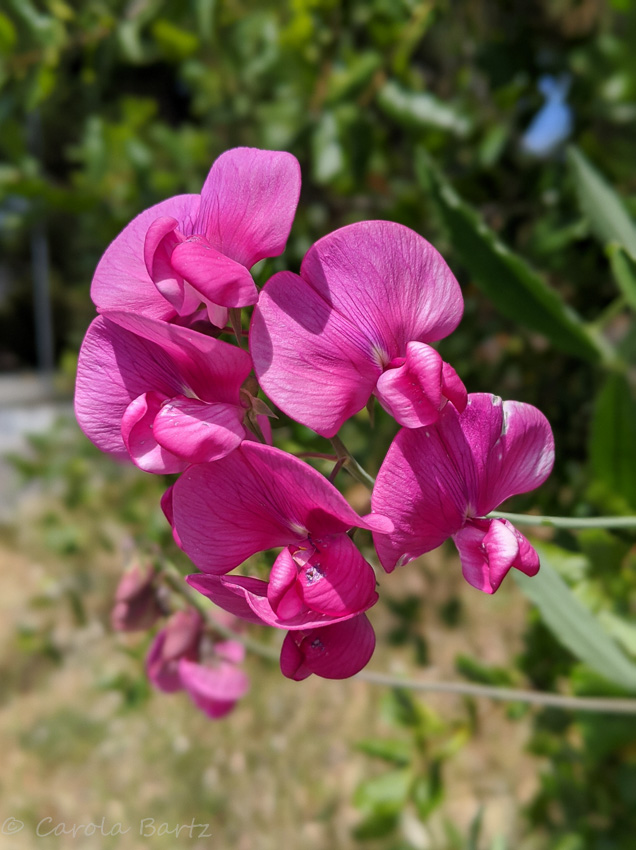 Of course Lathyrus latifolius, the perennial peavine, could be seen everywhere.

After walking for quite a while I found a bench where I sat down for a while, listening to the birds, breathing in the wonderful scent of the old trees, feeling the sun on my skin, hearing the whispering of the soft breeze in the leaves, watching busy little squirrels and just enjoying being in nature. 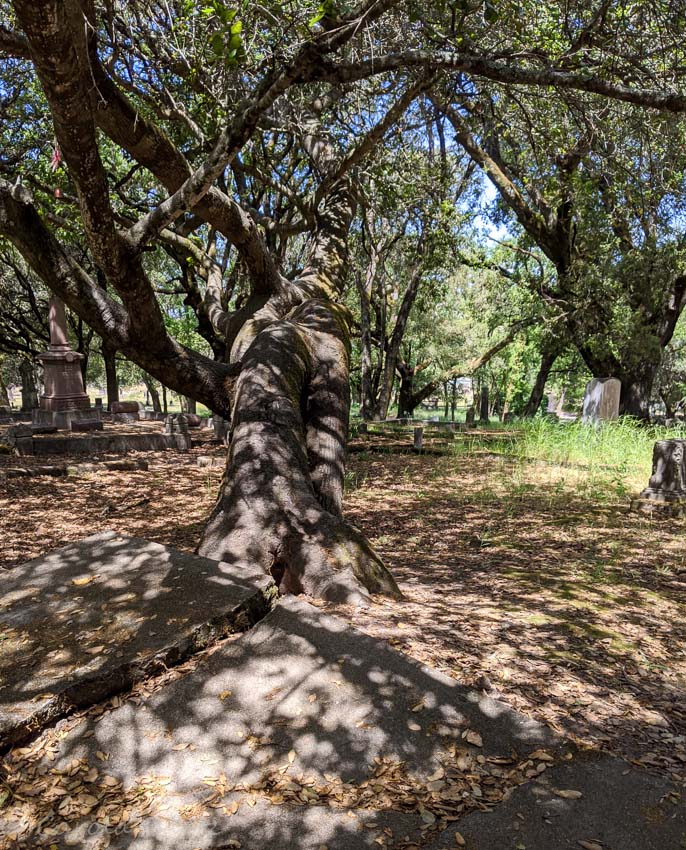 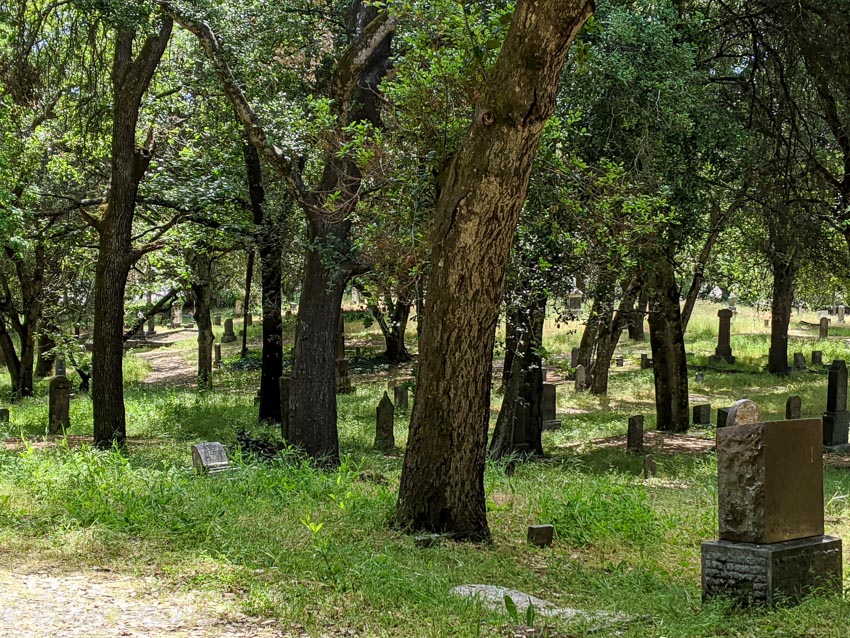 Only a week later the parking lots were opened as well while beaches at the ocean still remain closed (except for coastal residents). But I'm still weary of crowds and avoid the more popular parks. I find all the peace and calmness of nature in this old cemetery where time seems to stand still. This is enough for me right now. 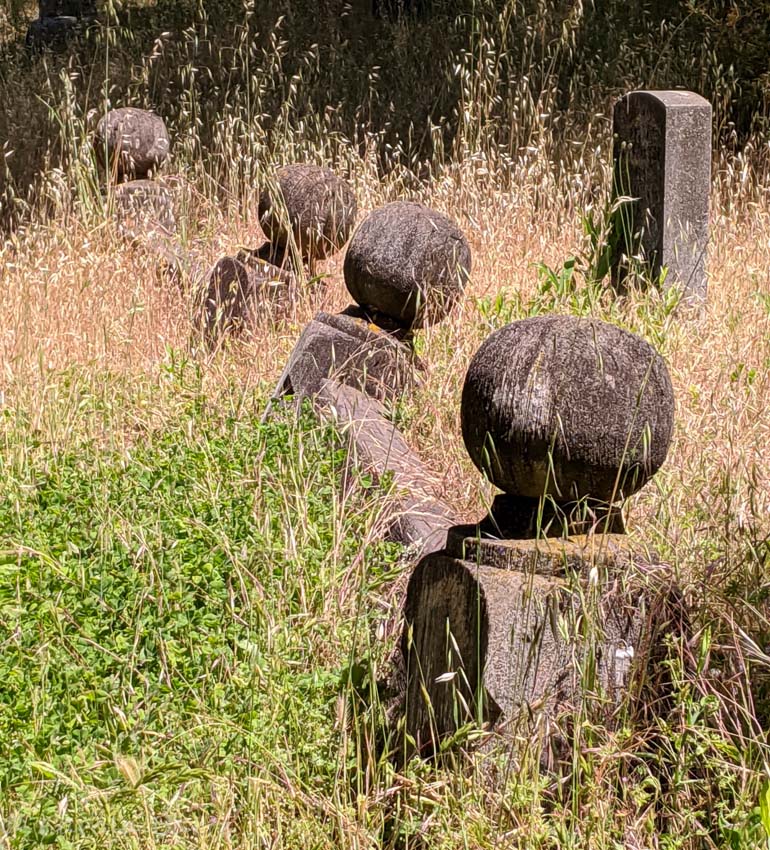 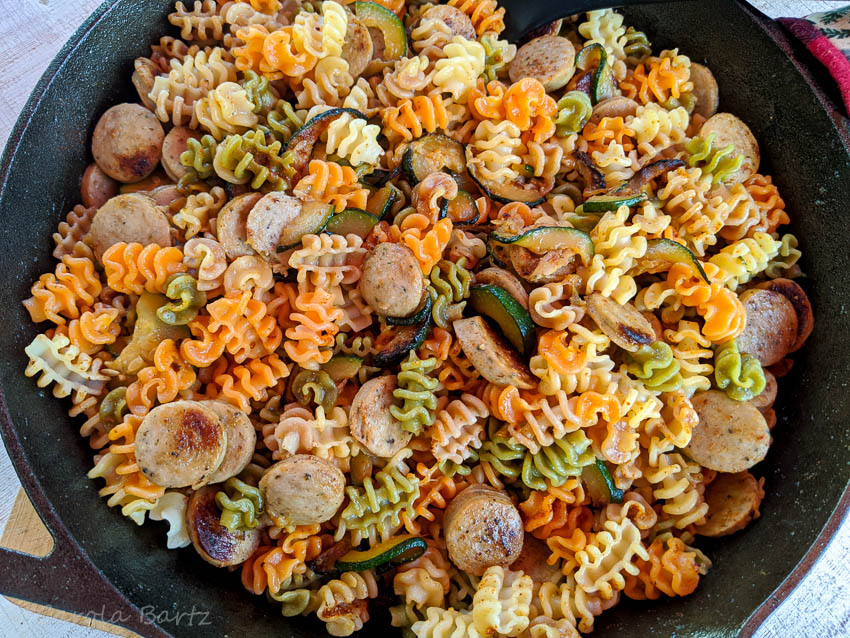 These past two months have been incredibly intense and challenging. I assume that many of you felt that as well. Shortly after our shelter-in-place order was set on March 18th the German School went in overdrive to figure out how to keep up our classes. The board of directors - of which I am one - met so many times via Zoom that I lost count. But we achieved our goal - via the educator platform of Zoom and the flexibility of all of the teachers we were able to continue our classes, albeit in a very different way. Then someone suggested that since we already have Zoom we could offer some classes over the summer - since no one was going anywhere anyway. The teachers who were up to it - including yours truly - sat down to design their classes, the board worked out how to organize it and finally we had a good offering of summer classes as well. Everybody worked really hard to get this off the ground, and I'm so proud of everyone in the team.

On top of that there were staff meetings with the high school and with the library technicians of the school district. Last week I was finally able to actually get onto campus and into the library to get at least a few things done. It felt very weird to be there all on my own when the school usually is so full of life.

No wonder that cooking became a great way to get me away from the computer and create something that was filling and satisfying (don't ask my ever expanding waist line, though). 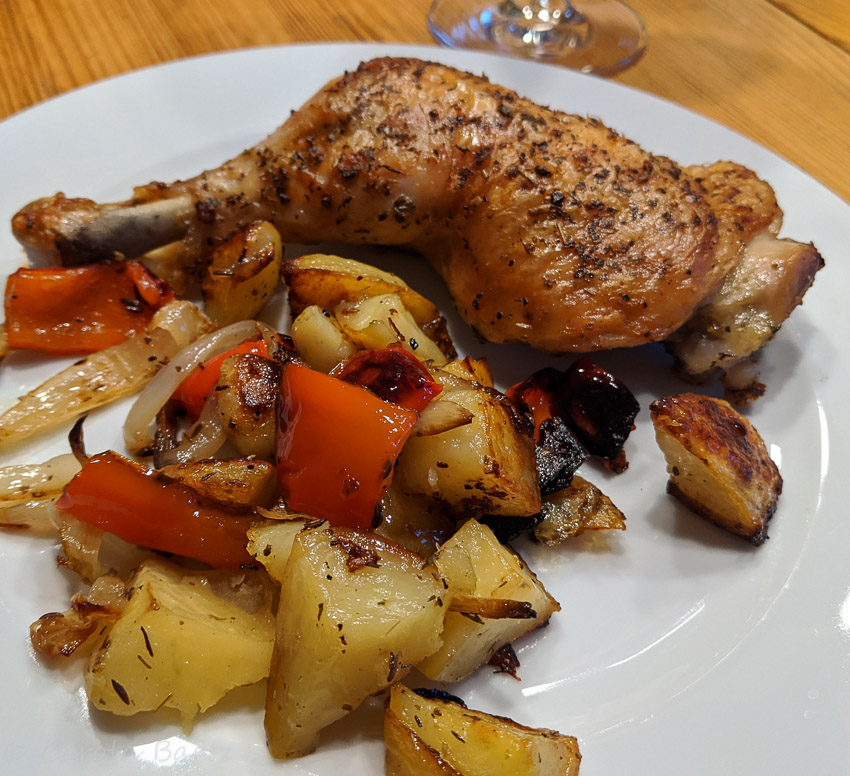 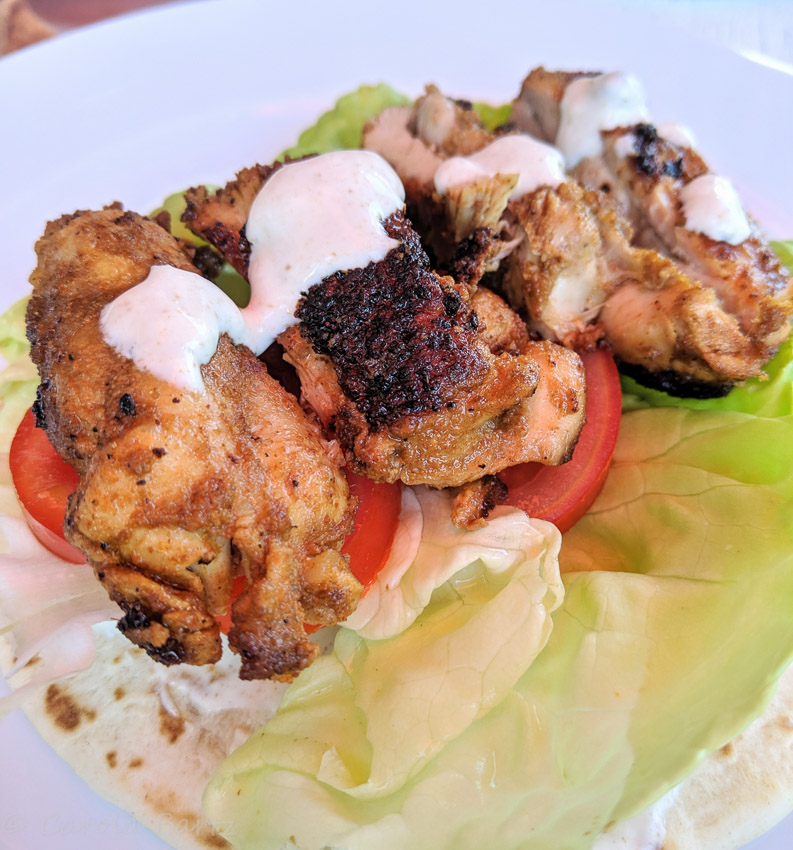 The first time I tried the Middle Eastern dish Chicken Shawarma was last summer and it has quickly become a favorite. We eat it with flatbread, lettuce, tomatoes and garlic yogurt with lots of cumin. The recipe asks for cooking it on the grill, but I opted to make it in the oven and it turned out delicious. If you like some spice in your food you will like this dish. You can find the recipe here.

The Southwest Skillet Chili Mac is another favorite and perfect for cooler days (we had some rather chilly days during those two months). I wrote about it here, and the recipe can be cooked as a vegetarian as well as a meat lover's dish. 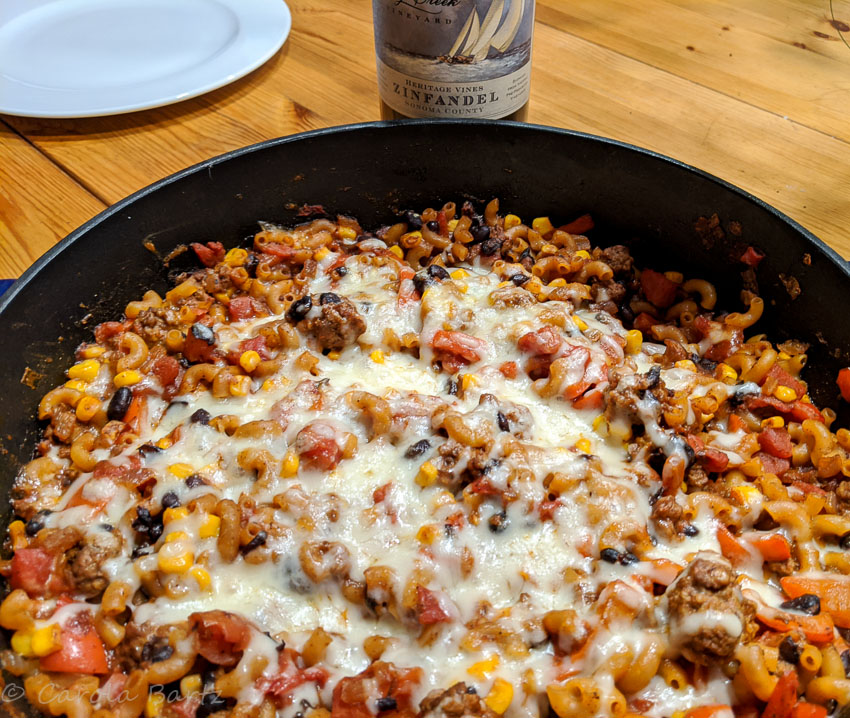 Then our oven broke! Well, not the entire oven, but the heating coil. Of course all the stores were closed, so we had to get one online which took several days. Thankfully my wonderful friend Liz send me a few stove-top recipes. Some of them I tried out - oh, I will definitely make them again!

How about Balsamic Garlic Chicken? 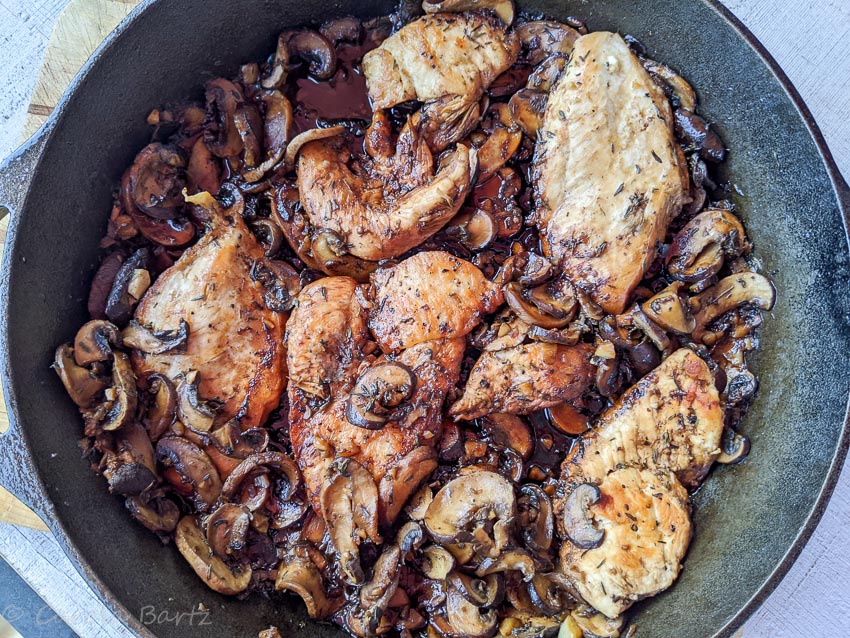 Or Spicy Thai Noodles? This recipe asks for linguine which I couldn't get (pasta was pretty low in the two stores where I shop), but I still had some Udon which tasted great in this dish. 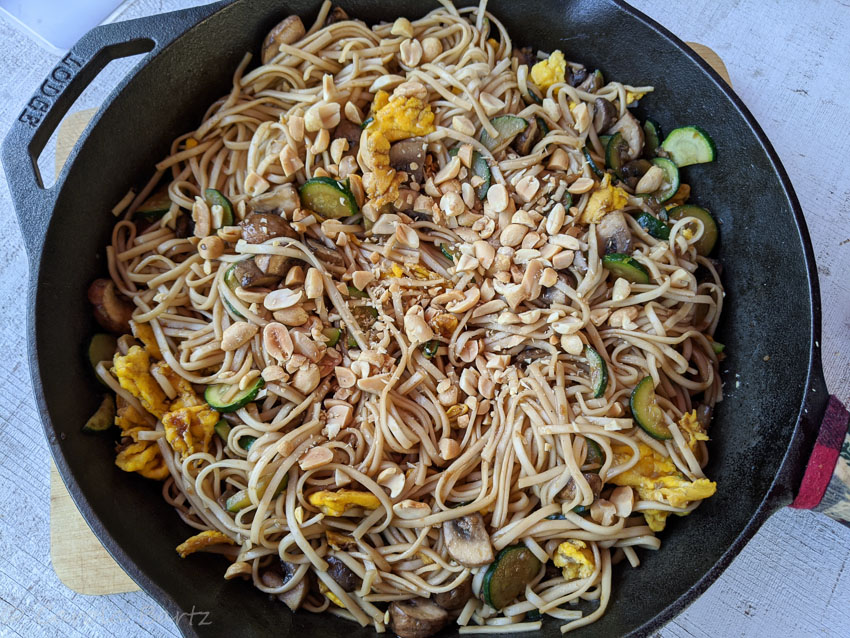 During this pandemic I usually do my big grocery shopping every other week, when I also shop for my elderly neighbors. I shop at Trader Joe's - have done so since 2001 and there are still the same employees! But we are lucky to also have a small but fine grocery store "around the corner" (10 minutes to walk) which is important if I want something really fresh or local products. I also enjoy going to the farmers market even though it is not much fun at the moment.

My cast iron skillet has been used a lot indeed! 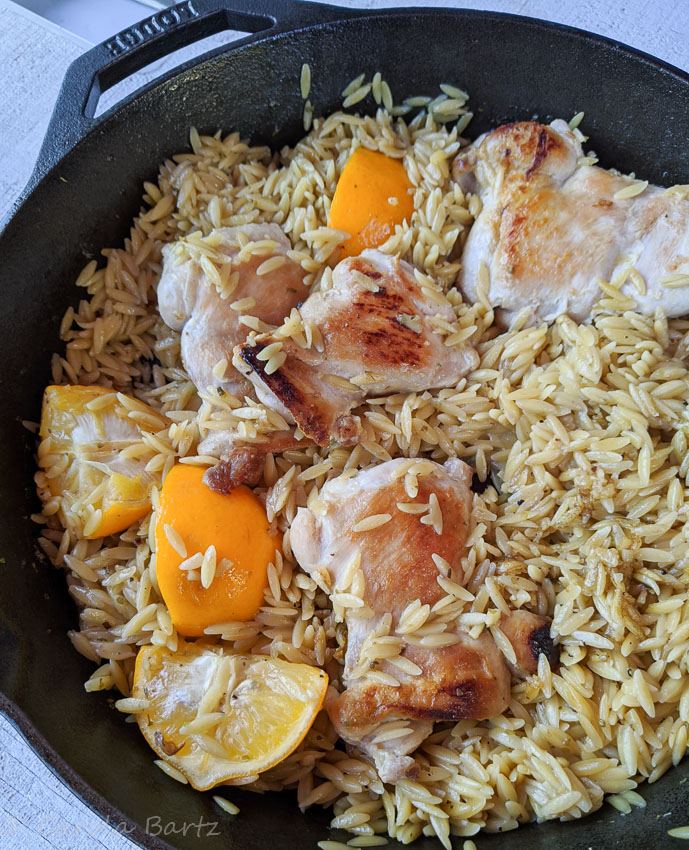 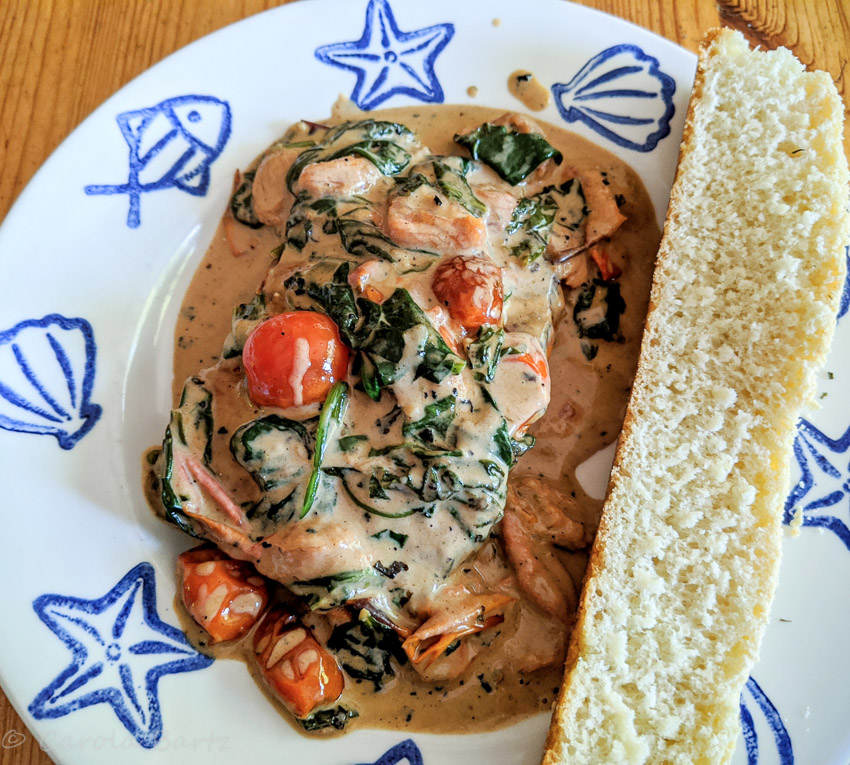 Tuscan Butter Salmon with lots of cherry tomatoes and spinach, plus some homemade focaccia

After the coil in the oven was replaced (thanks to the Geek) it was back to the oven - whole grain bread with pumpkin and sunflower seeds as well as my first try baking focaccia - it looks odd (I'm not a good dough shaper), but the taste was very nice. There certainly is room for improvement. 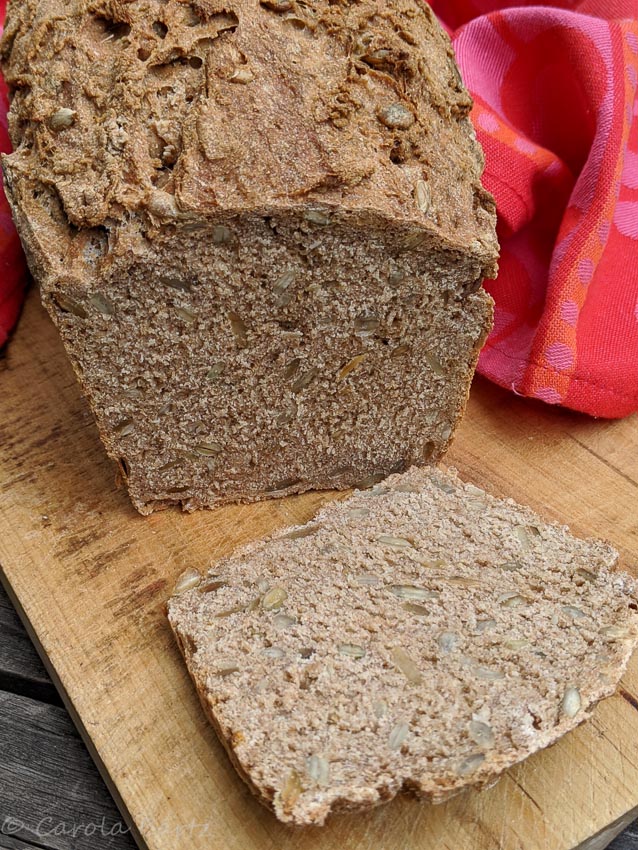 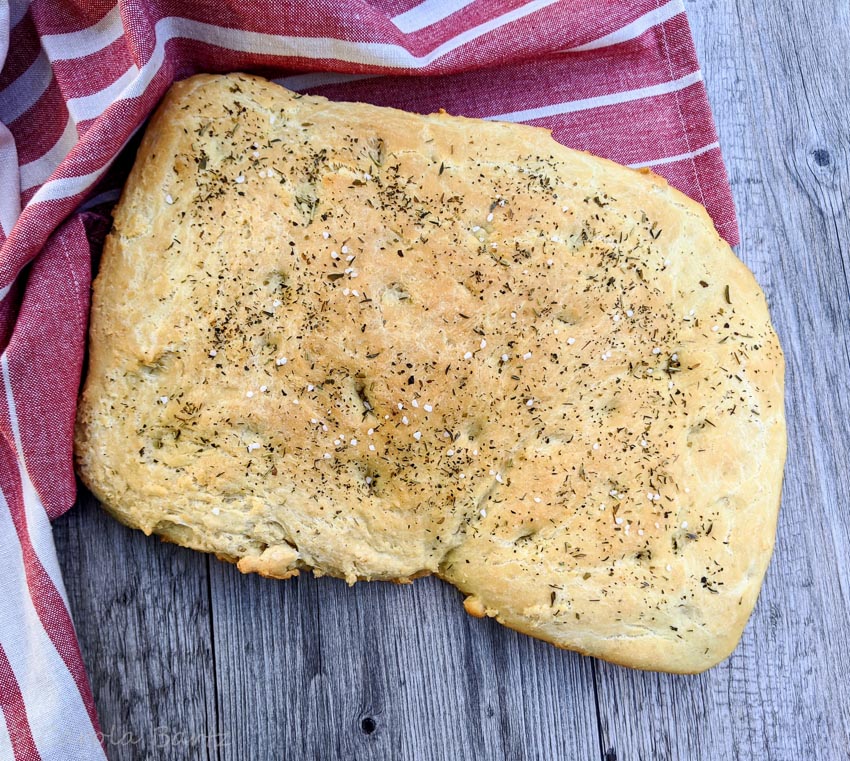 With the oven back in place I could also make other favorites - like the Broccoli Mac'n Cheese, a recipe I found 30 years ago in England and still love. I don't think that our family can live without it. 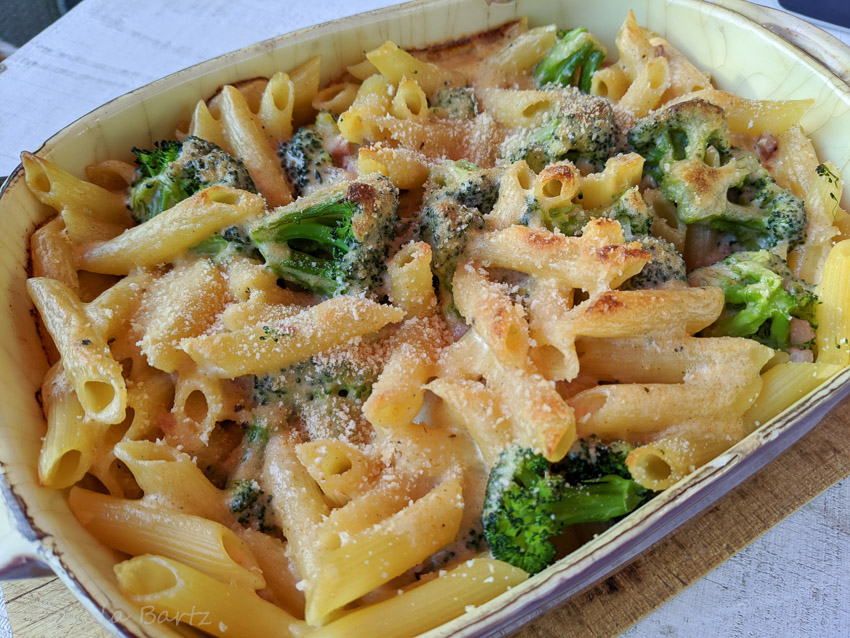 I think I need to stop here - there will be a second part to this blogpost with other delicious dishes and of course some desserts! And we don't forget the drinks either!

What have you been cooking? 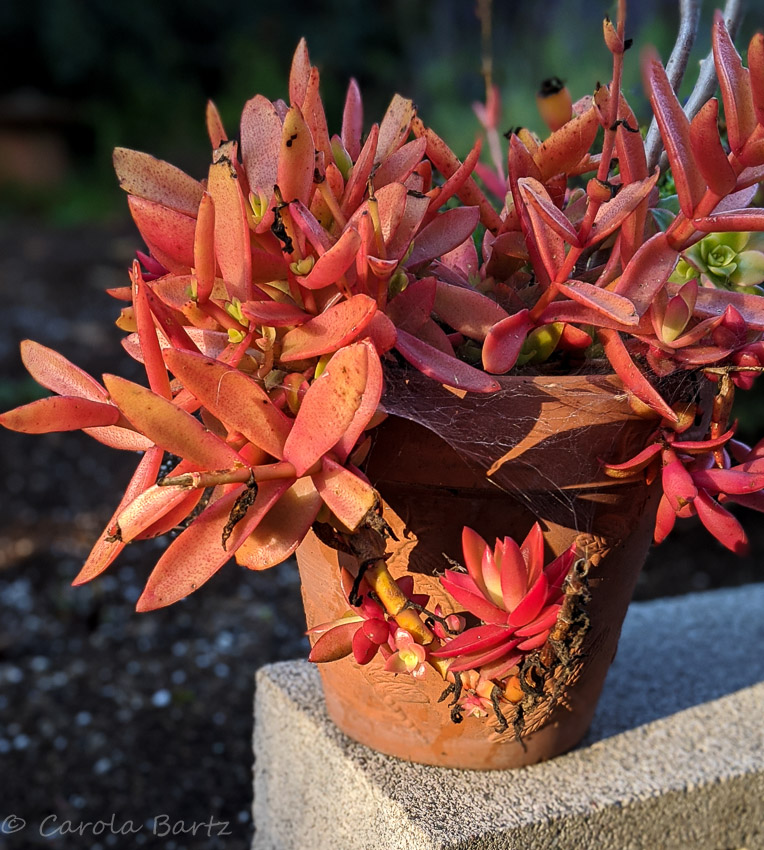 Every morning I start the day with a walk in the garden. The pandemic hasn't changed that - on the contrary, the garden has become my refuge even more than in "normal" times. I particularly like the mornings because of the light - I simply love how only bits and parts are illuminated while everything around it remains in the shadows. 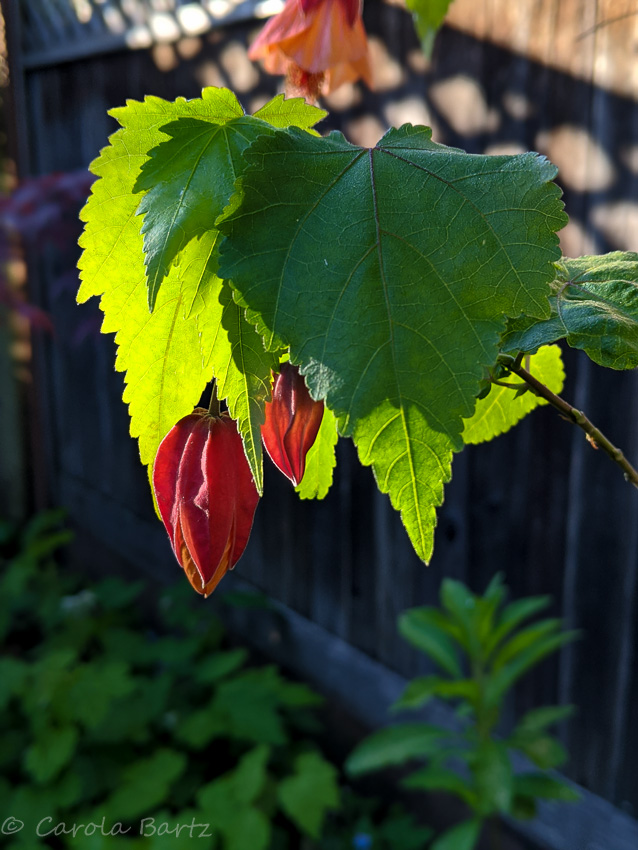 It's also the quality of the light - it's warm and soft, spreading a beautiful glow. How can I as a photographer not see that? And how can I not try to capture it in an image? 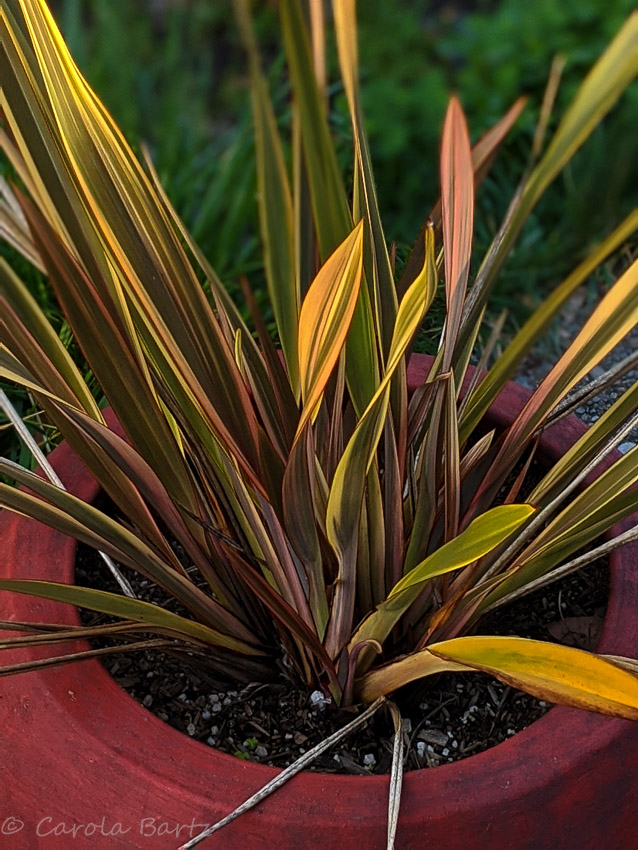 The peony had an additional gift - morning dew. Can you see the tiny droplets? 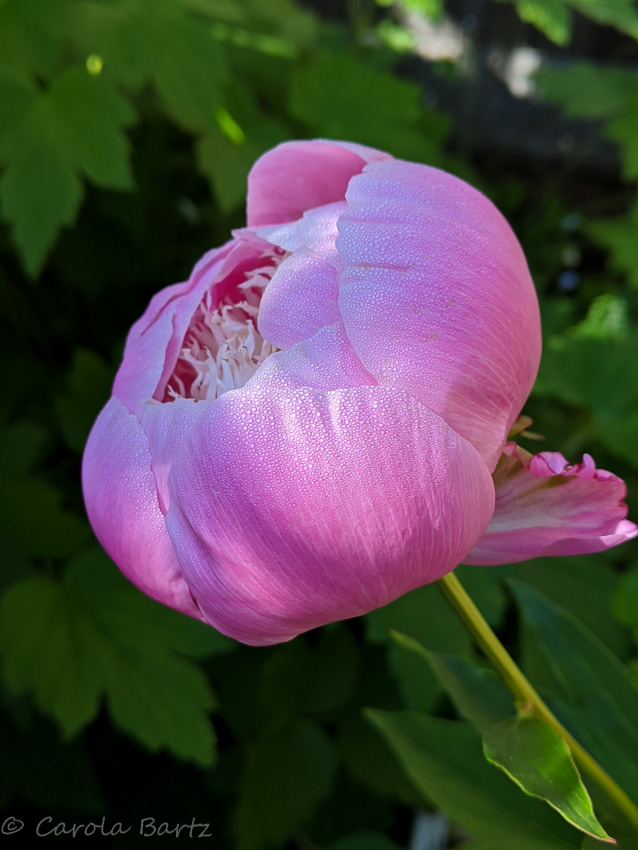 Even the pots become something whimsical. 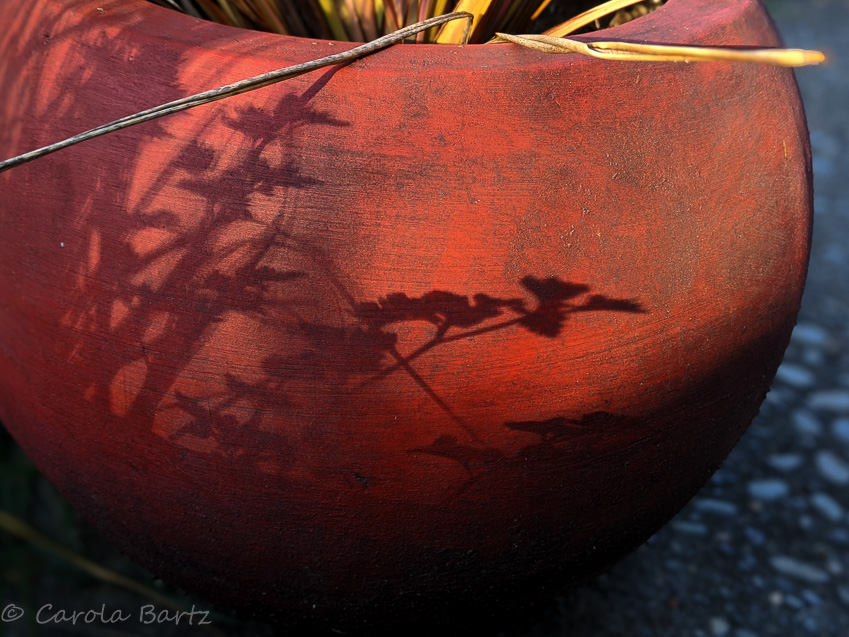 A small part of the hollyhocks beside the path is illuminated - these plants will grow pretty tall and are a very few of non-drought tolerant plants in my garden. My guilty pleasure - I love hollyhocks, they always remind me of England. I'm loving the light in the pomegranate tree - this is the tree I planted a few weeks ago and it already gives me so much joy. 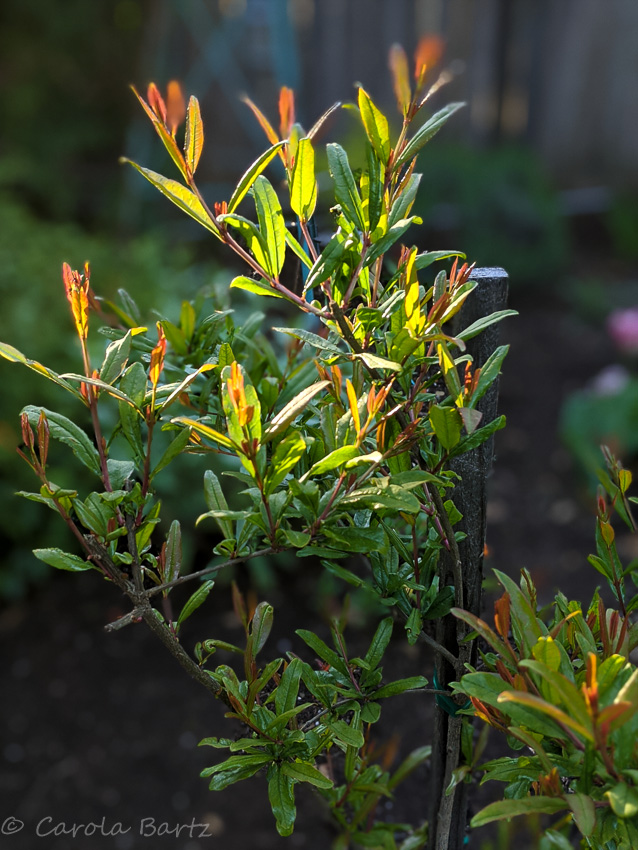 What is your morning routine that sets you up for the day?