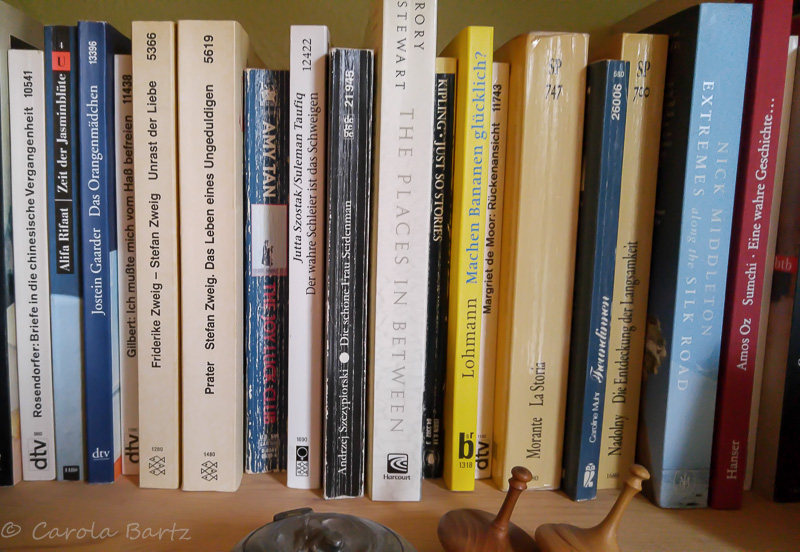 Before the first month of 2019 is over I thought I want to write at least one post for my blog. I can't believe that I haven't written anything since we said goodbye to 2018 - this month just flew by in all its busy-ness. But finally I'm here, and what better topic to write about than books? 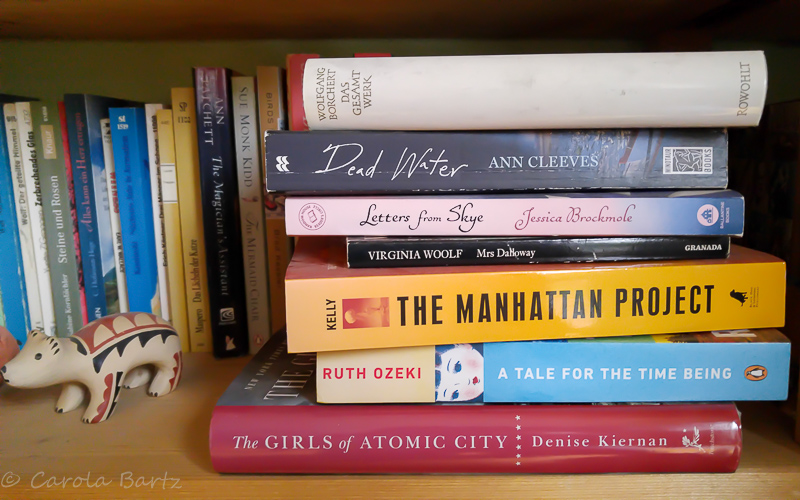 My book shelves are still in a state of complete disorganization, but thanks to my Kindle Paperwhite I didn't add many new books to the chaos. I did, however, add a lot to the Kindle. 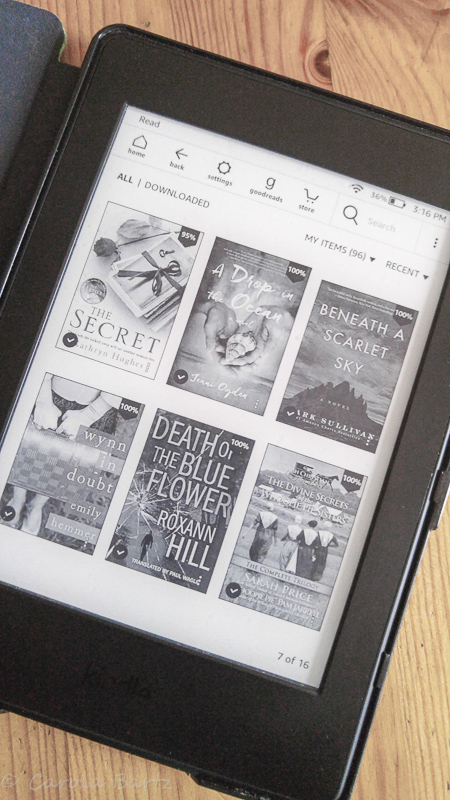 I also list them chronologically in a big notebook - title, author and when I finished it. If I particularly enjoyed a book it gets a little star at the title - when I look back at the list I realize that I enjoyed quite a good amount of books last year. This is the way it should be, right? 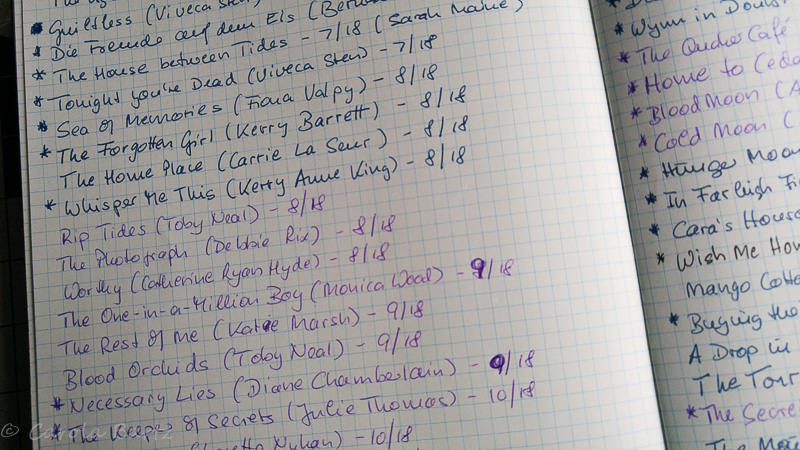 Some of the novels that I loved are "War Brides" by Helen Bryan, "Cara's House" by Annie Katz, "The House between Tides" by Sarah Maine, "The Forgotten Girl" by Kerry Barrett (wow, what a story!), "Whisper Me This" by Kerry Anne King, "Beneath a Scarlet Sky" by Mark Sullivan and "The Secret" by Kathryn Hughes. For some reason I fell in love with "Red Mountain" by Boo Walker which is not even an outstanding book, but it's a sweet story and I like almost all of the characters. That doesn't happen very often.

My favorite book, however, was "The Keeper of Secrets" by Julie Thomas. The title suggests chick lit, but it's anything but. It's the story of a special Guarnieri violin from the 1930's in Nazi Germany through the time of the Soviet Union to present day America. It's gripping, often sad, and beautiful. I learned a lot about violins and music in general. When I was done I had to listen to Bach's violin concerto that is mentioned in the book and re-discovered my love for classical music. 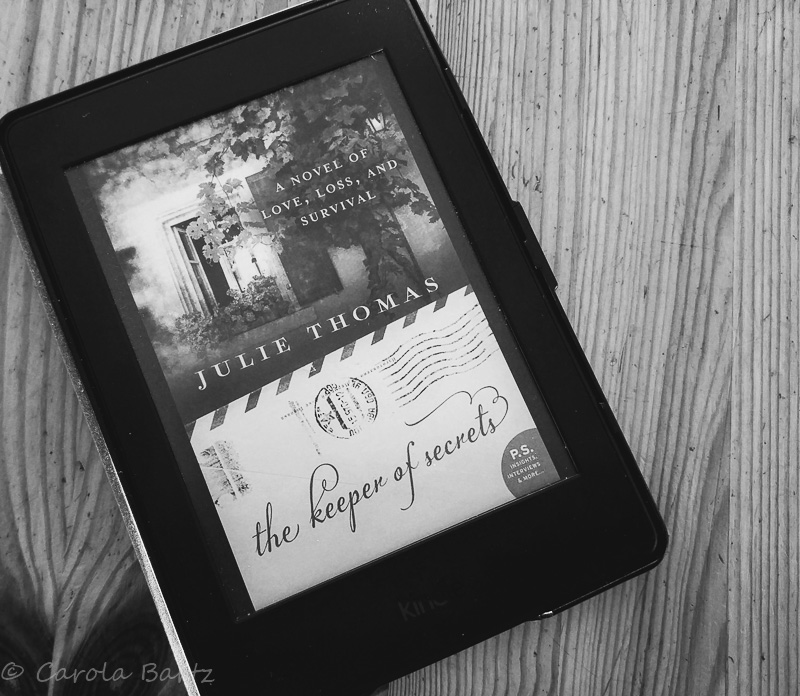 As some of you know I also enjoy reading mysteries. I hard started the "Huntress" series by Alexandra Sokoloff in 2017 and read the remaining four "moons" in 2018 ("Blood Moon", "Cold Moon", "Bitter Moon" and "Hunger Moon") and think there are more "moons" to come. It's actually not a mystery but downright thrillers. The interesting thing is that the reader roots both for the detective and the murderess (who also develop some feelings for each other). It's not so much a "who done it" but "why" and the entire background story. I was going through a whole range of feelings while reading these books and they have never quite left me. Another author of mysteries is Viveca Sten, a Swedish writer whose books I discovered this year. The Sandhamn Murders series takes place on a small island (Sandhamn) near Stockholm and not only deal with the crimes but with the daily life and its challenges of the main characters. The first in the series is "Still Waters" and I would start out with that (the Sandhamn Murders as well as The Huntress series should be read in the right order to fully understand what's going on).

Of course I also read German literature. I re-visited one of my favorite writers of short stories, Wolfgang Borchert, who died in 1947 at the age of only 26. One of his most endearing stories is "Nachts schlafen die Ratten doch" (The rats do sleep at night), that in all its sadness and desperation is uplifting in the end. I have decided to use my German language students as guinea pigs and read this story in class. 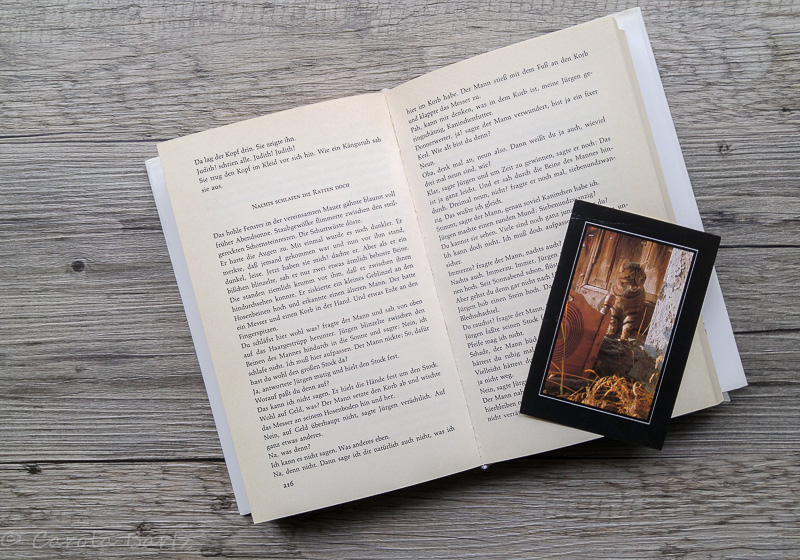 One of the books I used the most is this one - my trusted Sibley. 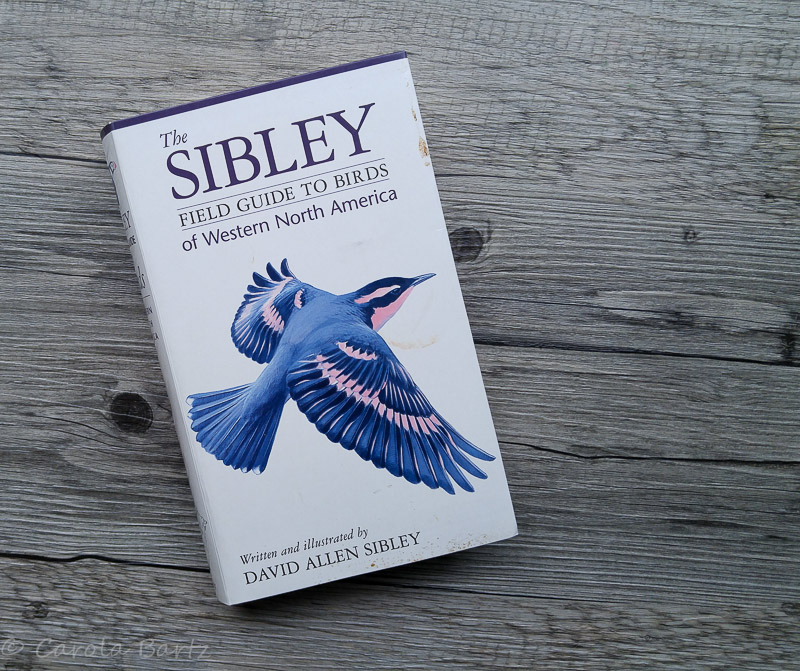 In my opinion it is one of the best guides to birds, and so far I have found in here every unknown bird to me I ever saw. I only wish it came with a disk or a link to the sounds of the birds as well.

Other books I consulted over the year or looked into over and over again are these ones: 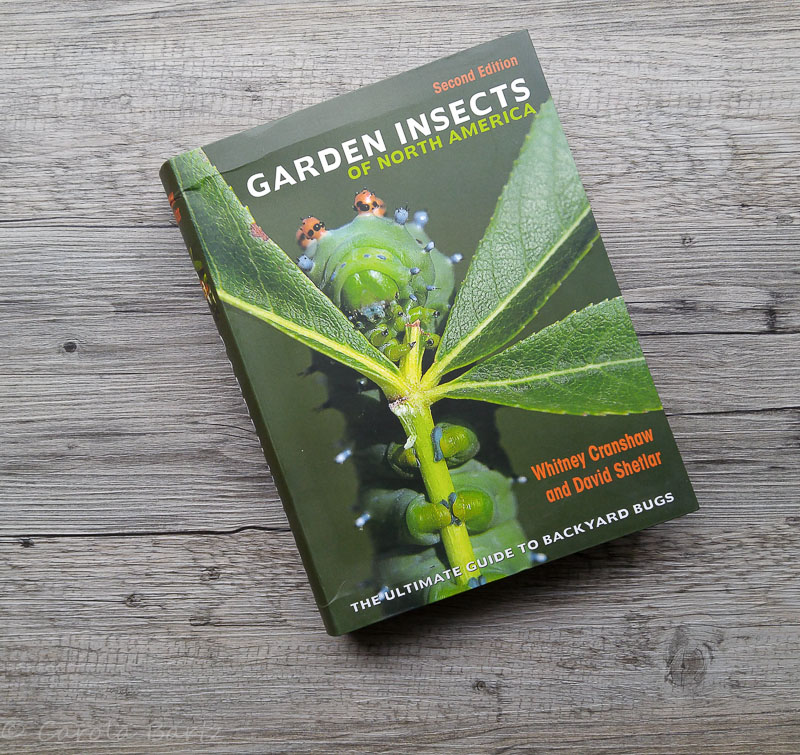 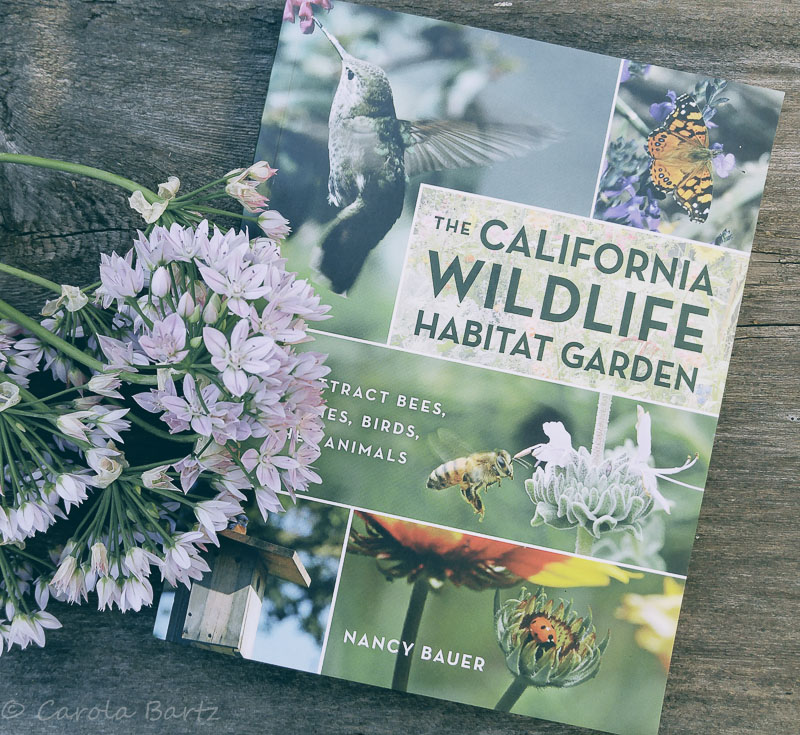 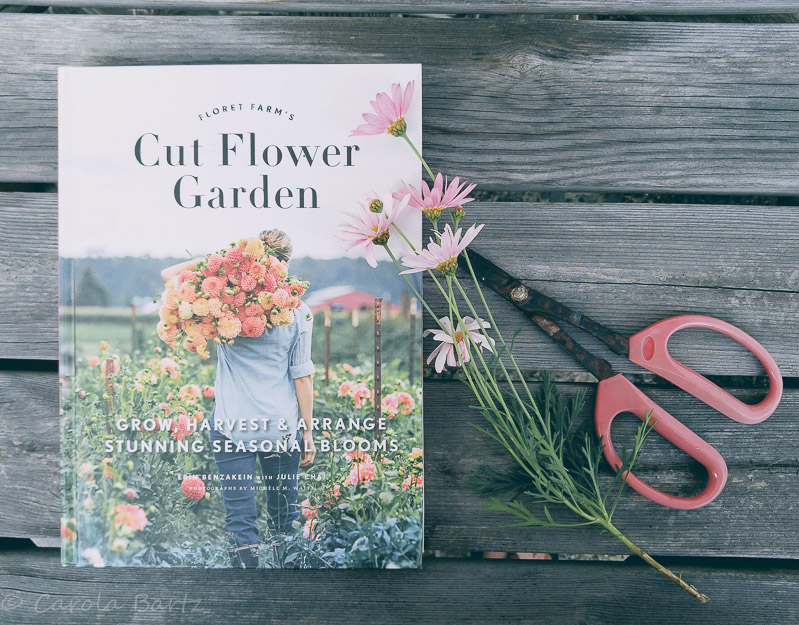 Shortly before Christmas my private student gifted me a beautiful book in a sturdy box and with a giclée print of one of the paintings of the artist. It is about the art of painter and naturalist Thomas Quinn who grew up and lived in Marin County (the county between here and San Francisco). It shows many if not most of his watercolors as well as quotes and poems, some written by Quinn himself. The book is exquisitely done (my student was the printer of that book) and a true treasure. 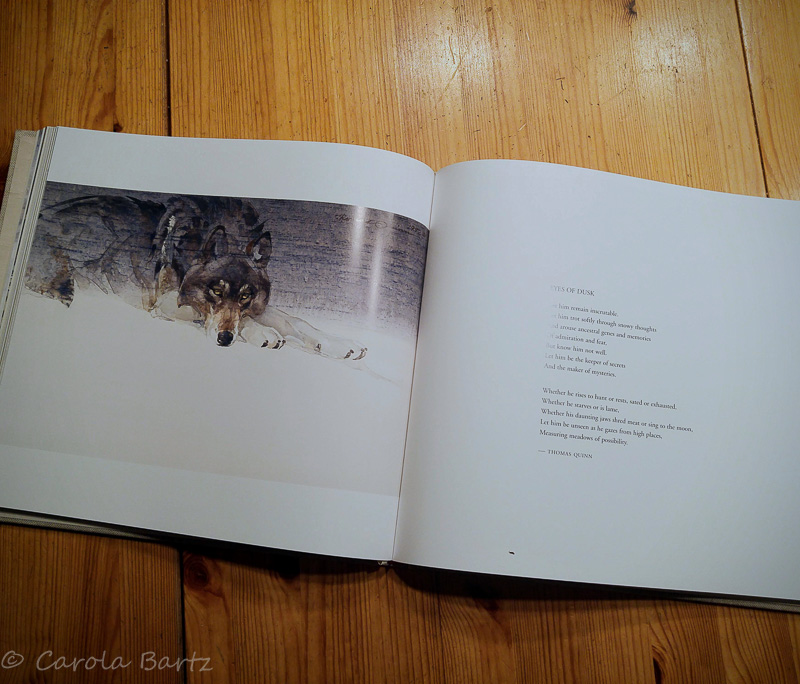 Now let's go back to reading, shall we? 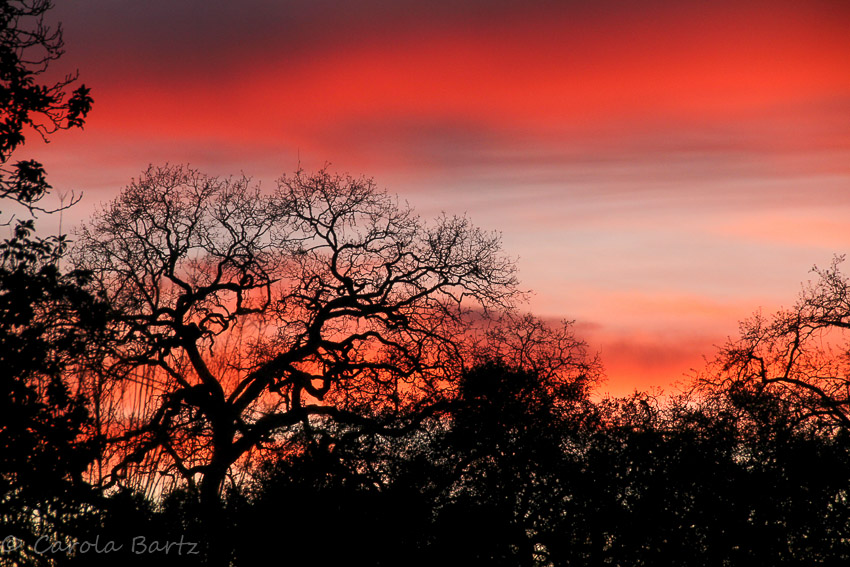 Northern California winters - at least here at the coast - are mild ones with the occasional freezing nights and chilly days. Clear days and nights mean colder weather - and stunning sunsets. Somehow. the winter sunsets are so much more brilliant than the ones in summer. The colors are bolder and there are way more pink and red shades in the evening sky. The same, by the way, goes for sunrises.

December had some amazing sunsets for us. I saw this one from our upstairs window, grabbed my camera and went outside and further down the street. I knew that this tree would be the perfect silhouette for the sky. Bare trees are my weak spot, and this one is a preferred resting place for dozens of crows during the day. I once saw a hawk perching on a branch and observing its surroundings (no crows in its vicinity at that time!). The tree stands just at the edge of a lovely meadow that is home to our beloved neighborhood donkey.

While I'm writing this it's raining - much needed and therefore more than welcome. No gorgeous sunsets for the next few days.