A Rainy Day in Switzerland 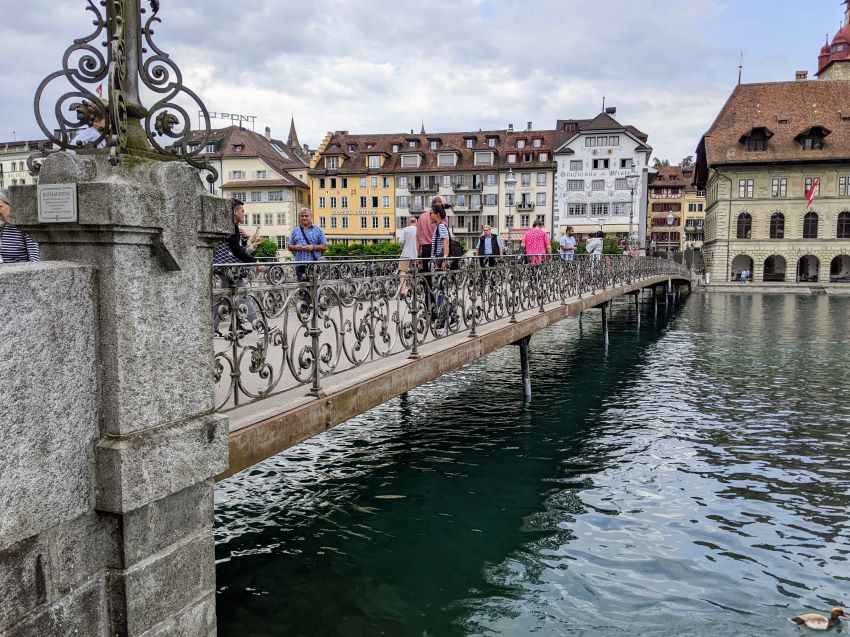 Last week I left you in Freiburg which is very close to the Swiss border. Switzerland was our next destination. If you happen to have paid for a vignette - the toll for Swiss highways - you can take the highway and reach your destination pretty quickly. After all, Switzerland is a small country that has four main linguistic and cultural regions: German, French, Italian and Romansh. However, the price for this vignette is pretty steep considering that we were only spending two days there (Switzerland is a very expensive country) and therefore , we decided to drive along the smaller roads. It's a decision that we didn't regret, even though our progress was relatively slow. There are a lot of mountains to cross - but that was on the second day and will be dealt with in a seperate post.

We have been to most of Switzerland before, but we never had visited Luzern (Lucerne), so this was the place we reached in the early afternoon. Luzern  is located on the shores of Vierwaldstättersee (Lake Lucerne) and its outflow, the River Reuss. Its main landmark is the Kapellbrücke (Chapel Bridge), a covered wooden footbridge with its octagonal Wasserturm (water tower in the sense of a tower standing in the water). The bridge was first erected in the 14th century (c 1365) and spans the river Reuss. 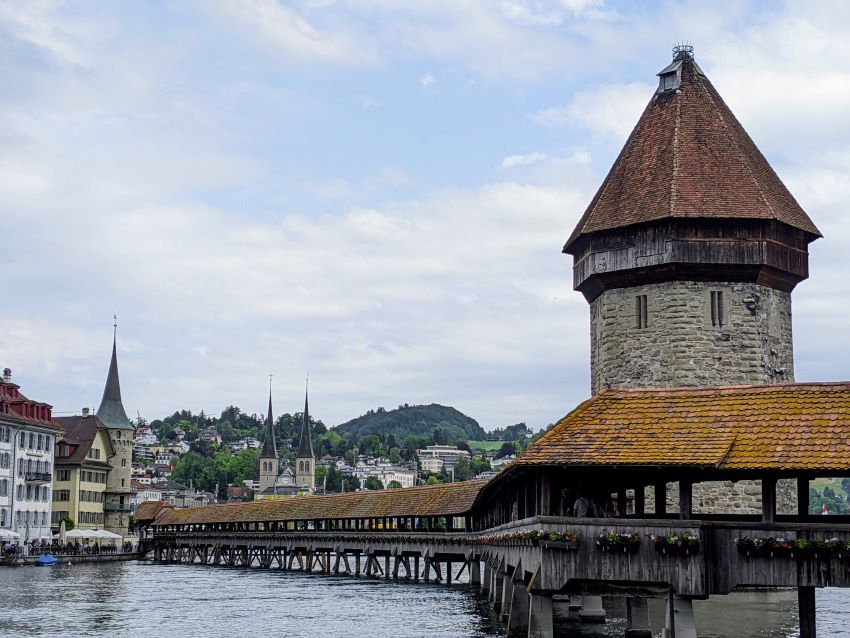 It was dry when we arrived, but we did see some darker clouds gathering at the horizon. We decided to first cross over the modern footbridge (top photo) to the other side and walk back via Kapellbrücke and taking our sweet time with it. As it turned out, we pretty much hadn't a choice once we reached the covered bridge.

The clouds and the sky became dramatically darker and more ominous from minute to minute. 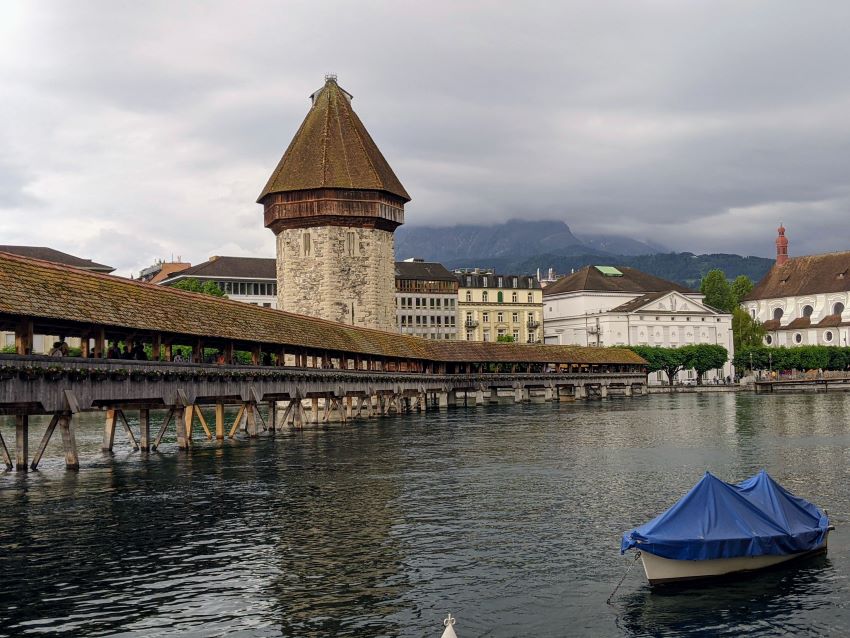 The first drops started to fall when we had just reached the bridge - we were lucky. We walked along the bridge, enjoying the still nice views. I loved the flowers at the side of the bridge. 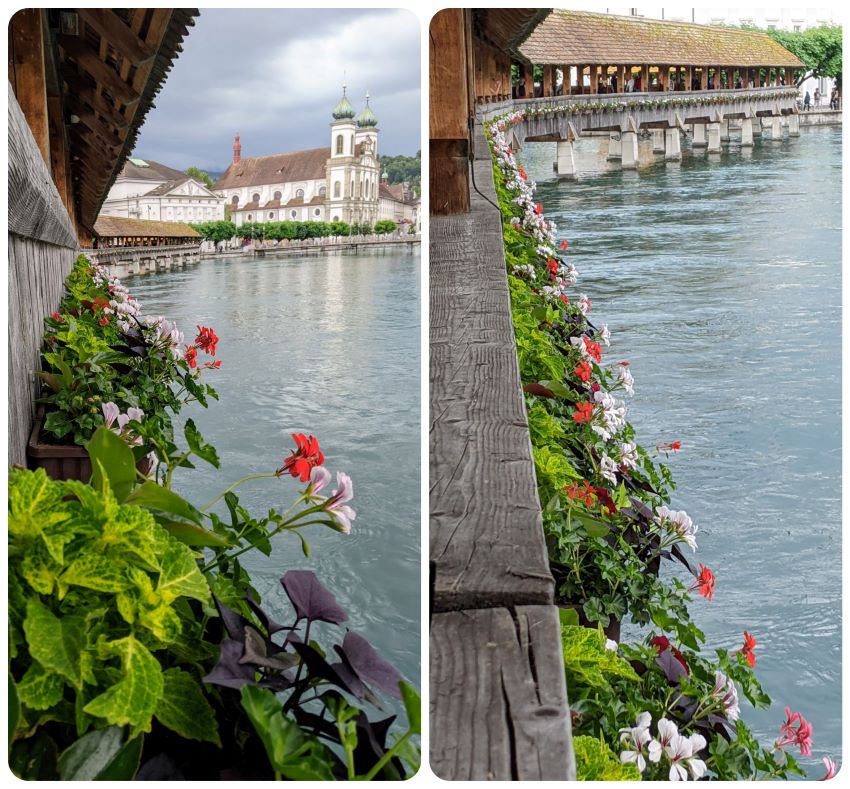 The view through the sides to the shores with their old city buildings was quite impressive. 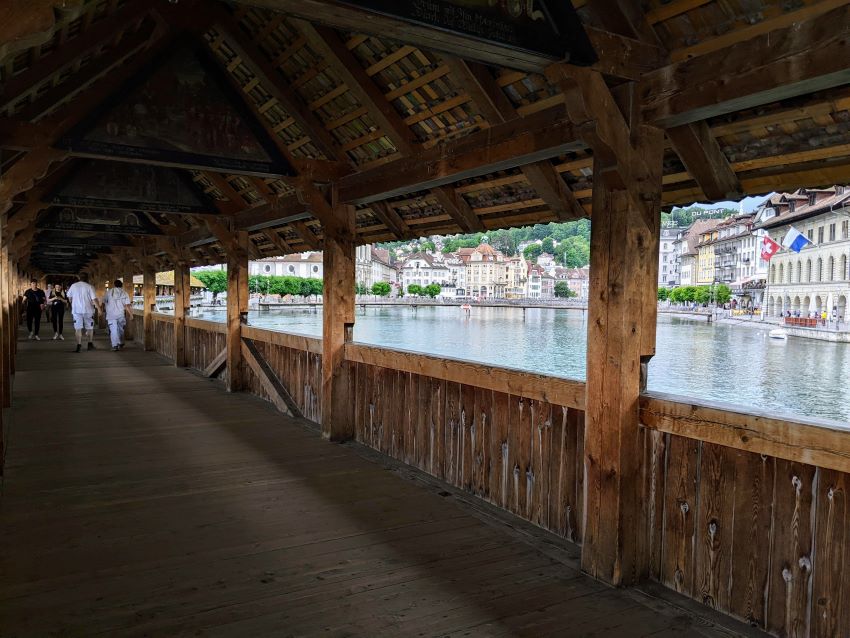 The Kapellbrücke (and two other wooden bridges in Lucerne) features painted interior triangular frames. This is unique since none of the other European wooden footbridges has this feature. The paintings date back to the 17th century and depict events from Luzern's history and were executed by local painter Hans Heinrich Wägmann. Originally, there were 158 paintings, but the majority were destroyed in a fire in 1993. Today. there are only 30 paintings that were fully restored (of the 47 that were collected after the fire). 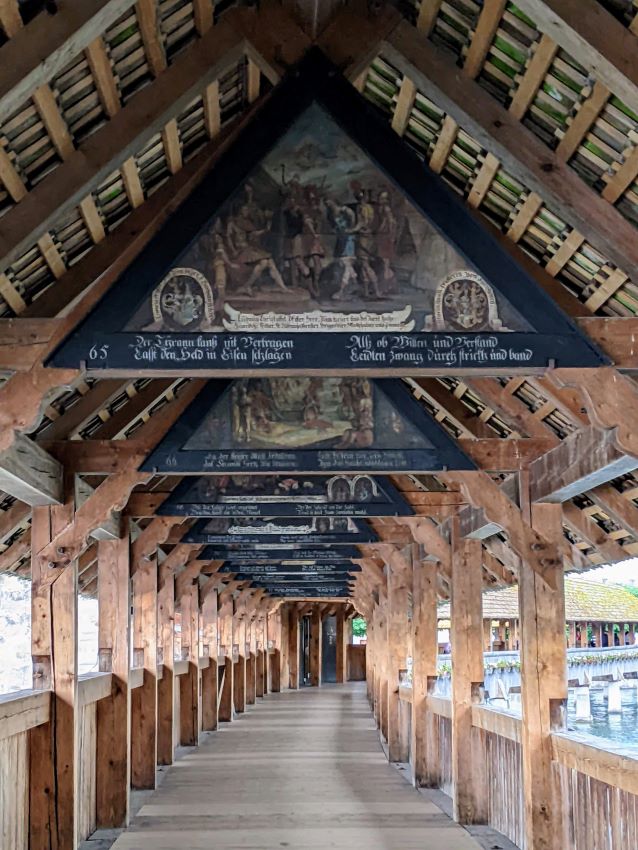 Then the thunderstorm started.
Within seconds the bridge was wet on the inside, the rain came in from all sides and on top there was thunder and lightning. I'm not sure how sensible it was to stay on a wooden bridge in the middle of a river during the thunderstorm, but we didn't have much choice - we were stuck. I have to admit that it was quite exciting. 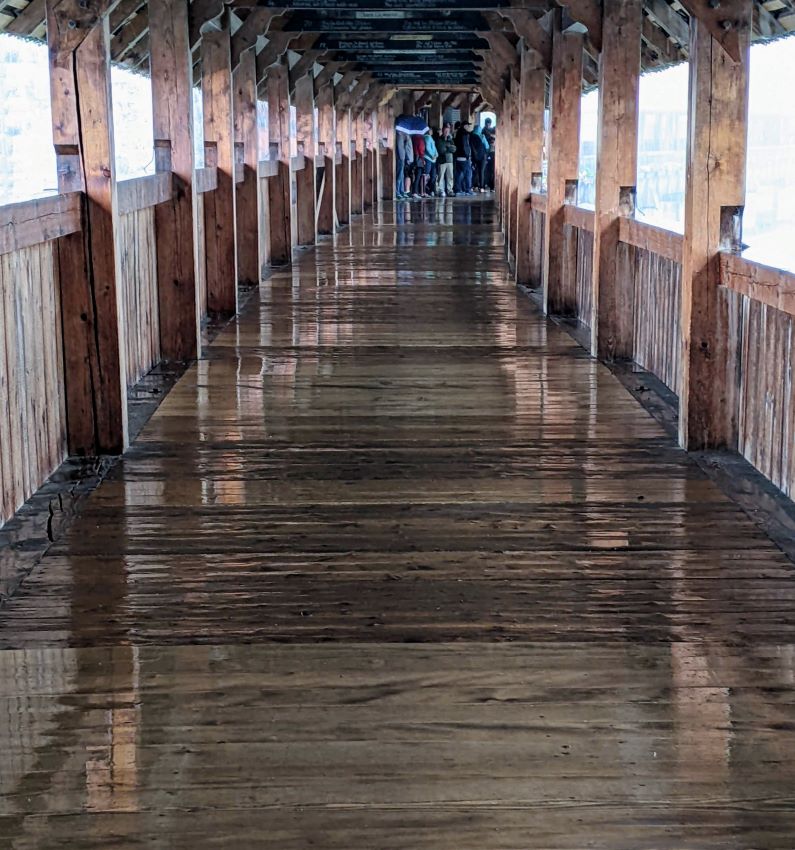 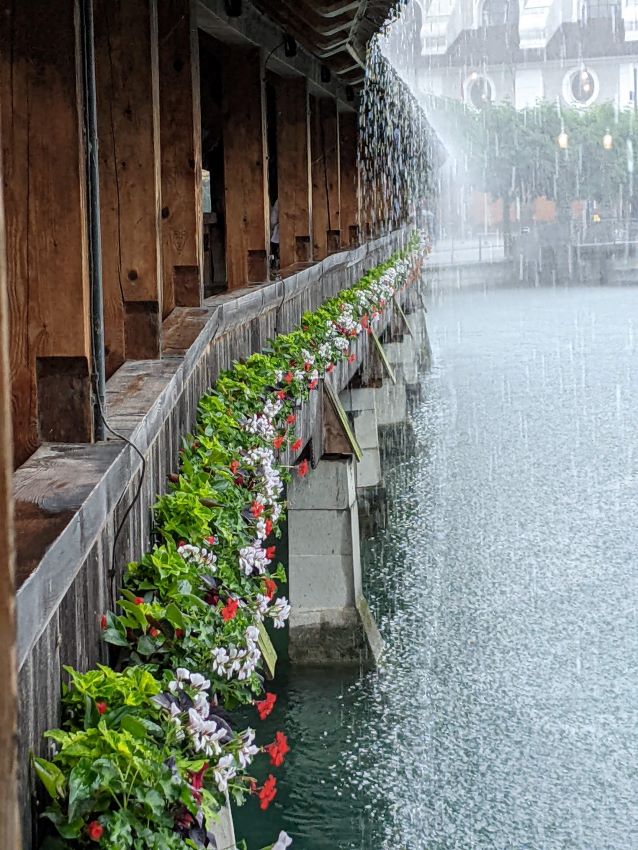 The thunder and lightning didn't last long. I tried to make a short video of the relentless rain. Turn up the sound.
After we were finally able to leave the bridge without getting completely soaked, we drove along the Vierwalstättersee to Buochs. Our hotel was right on the lake and if the weather would have been better, we would have had a great view of the mountains. 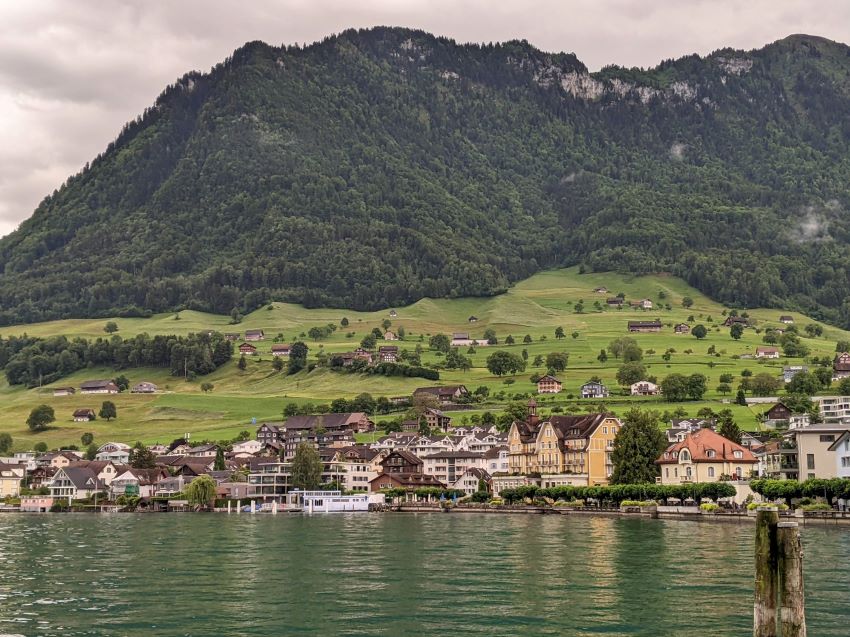 Instead we had low hanging clouds - they looked quite dramatic and I loved this moody atmosphere. 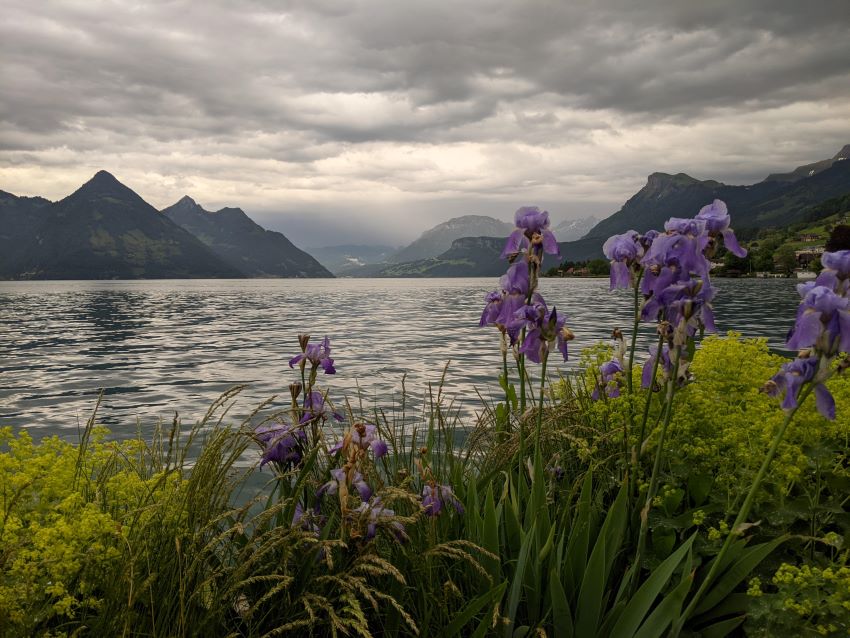 We had a delicious dinner in the restaurant of the hotel. I had filets of whitefish from the Vierwaldstätersee which is called "Felchen" (I couldn't find a proper translation, some call it a Lake Constance whitefish). They served Bavarian beer, so I had a dark Weißbier from the Erdinger brewery which happens to be one of my favorite Bavarian beers. This, of course, is for T Tuesday where I greet Elizabeth and Bleubeard with a cheerful "Prost" (German "cheers"). 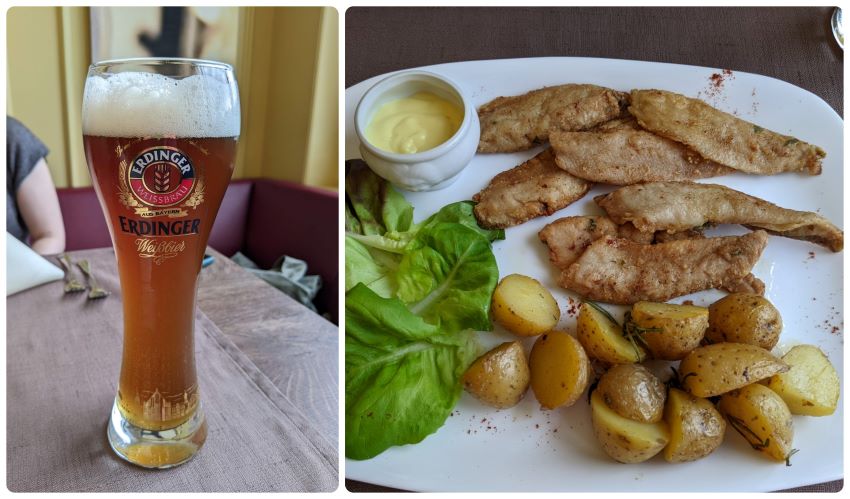 The covered bridge is really interesting. Too bad it’s not effective in protecting people from a rainstorm! Your dinner looks delicious.

I'm sorry about your weather but you're right -- it's rather exciting and dramatic, too. Love the view of the water with those dark clouds and the wide shot of the hillside. I'd never been that interested in Switzerland till I learned I had many-distant-past ancestors from there. It does look charming. I would have preferred smaller roads, too.

Even though you had some rain, you still had some lovely photos. What a beautiful bridge. I really love the photo of the rain coming down outside of the bridge, and the moody mountain view with the purple irises. And those paintings are amazing. It is too bad they couldn't save them all.And your dinner looks yummy. I don't know much about German beers, but going by the color it looks like one I would enjoy.Have a great T day Carola. hugs-Erika

I have so much loved my vicarious travels with you. Many, many thanks. PS: It is that time of year again. Would you like another Floriade magnet?

Your adventure continues and I love this latest leg of the trip. Being on that bridge would have been scary and exciting at the same time, I think. the shots from the bridge were incredible. Of course, I was delighted to read that you had beer again as your drink of choice for T this almost Tuesday, dear Carola.

Your photos perfectly capture the moodiness of the day, and the tremendous rainstorm. I visited Lucerne several years ago and crossed on the Chapel Bridge. I also enjoyed wandering alongside the lake.

I look forward to your travels every Tuesday! I have been to Lake Lucerne .. even took a paddle boat out on the lake.. And we saw someone blowing one of those big long horns AND had swiss fondue to eat.. It was quite warm the day we went.. Simply gorgeous paddling out on the lake with the snow covered mountains in the background.. Happy T day! Hugs! deb

I have never visited Switzerland, Carola, but almost everyone in my circle who has echoes your thoughts, "It's expensive!" I hope to make it back to Europe one day, but I doubt that Switzerland will be on my itinerary. All the more reason to enjoy it through your eyes. Hugs - David

Now that is a covered bridge. Not sure I can ever be excited about one around here again. I want to go and see that one. Amazing pictures, bridge, lake and food. When you travel you seriously travel. Wow. TFS, Carola. Happy T-day and hugz

Fascinating! I get excited hearing about features that date back so far. It's amazing to me. It sounds like you picked a great hotel :) I enjoyed my virtual trip, thank you. Happy T Tuesday

I love the view of the mountains Carola. I have been to Switzerland but not this place, I went to Bern and Laussane, one thing I noticed there was how fresh the air was, very clean and fresh. Happy T Day! Elle/EOTC xx

Rain or no rain it is so pretty there. Since we can no longer travel I appreciate you showing me all the places you go. Have a great day today.

Wow, Switzerland looks such a lovely place to visit even in the rain! The buildings look so magical and picturesque - perfect 😊. I'd happily join you for a beer - cheers and Happy T Day! Hugs Jo x

I have only seen Switzerland from a train- apart from a few hours in Zurich. It looked beautiful and your photos show just how beautiful Lucerne is. Happy T Day, Chrisx

Glad you were able to order the stamp too, thanks for your visit, Elle

That is so neat that the bridge has those beautiful paintings in the trusses. I also loved the flowers lining the outside of the bridge.
Low lying clouds are a favorite of mine. I see them most days as we live in the mountains and it is one site I never tire of. Your photo is beautiful especially with the purple flowers in the foreground.
Happy Tea Day,
Kate