T is for Taking a Walk along the Lake 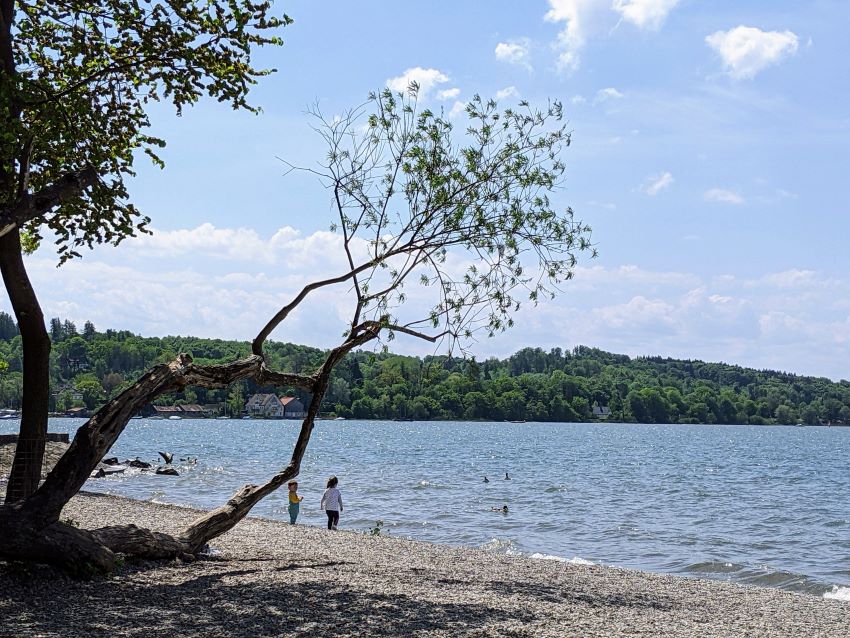 There are several lakes in the vicinity of München that can easily be reached by public transportation. One of them is the Ammersee, about 40 km southwest of the Bavarian capital. It is the third largest lake in Bavaria and quite low-key when compared to its more famous and cosmopolitan cousin, Starnberger See. One morning, Kaefer had to do some work, so she suggested the Geek and I take the S-Bahn (suburban train) to Herrsching which is right on the Ammersee and spend a few hours there before she would join us later in the day.

Se we did. Riding the S-Bahn is comfortable and fast; we arrived in Herrsching in less than an hour. It takes about ten minutes to walk from the station to the lake. 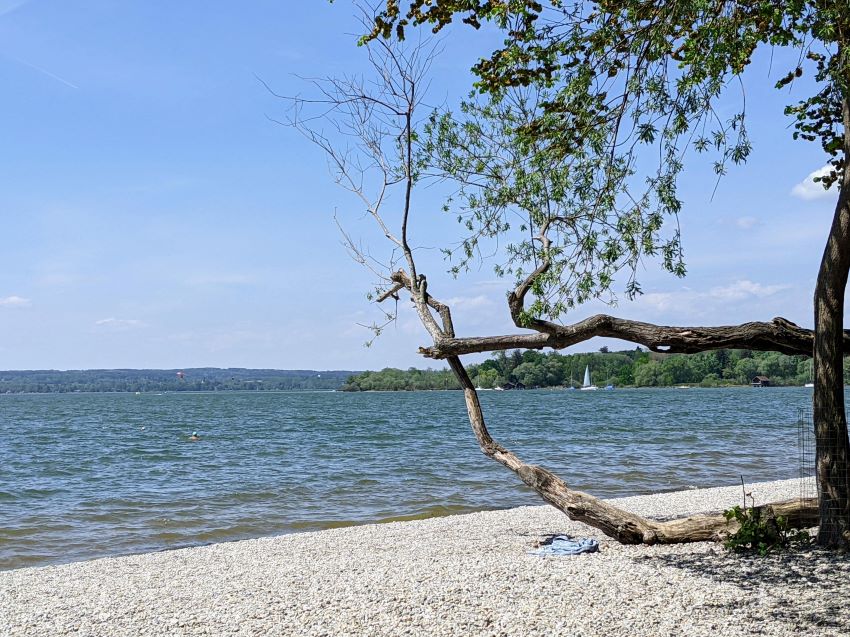 After we had spent some time sitting on a bench looking over the lake and enjoying the calm and peace, we decided to take a walk along the water's edge.

We first came upon this bronze sculpture of "Die kleine Seejungfrau auf ihrem Waller" (the little mermaid on her catfish) created by Hilde Grotewahl in 2005. 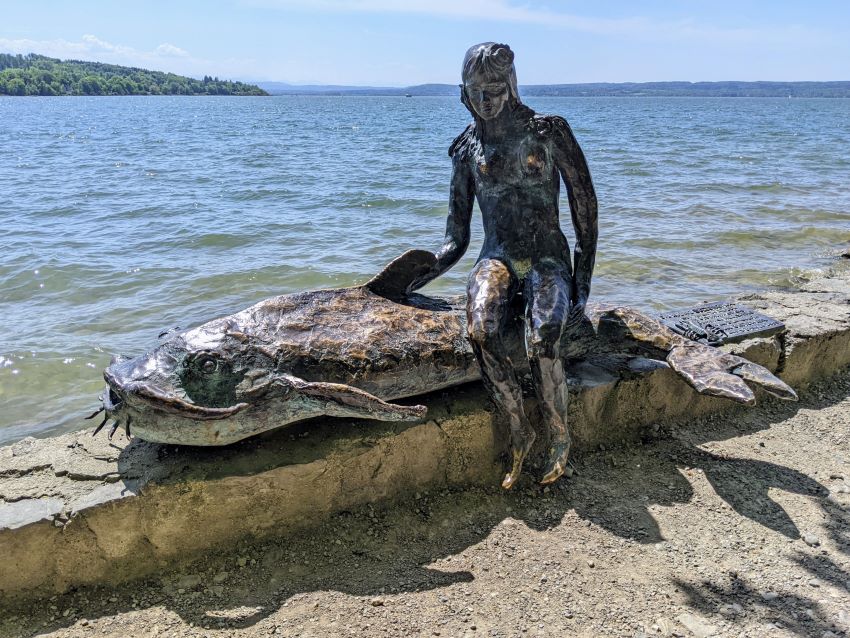 We passed the promenade and walked along the wilder part of the shore. Every now and then we met dogwalkers and people riding their bikes, but despite the warm and sunny weather it wasn't crowded at all. We bought each a cone of gelato and happily trudged along.

The views of the lake and the trail were always beautiful. 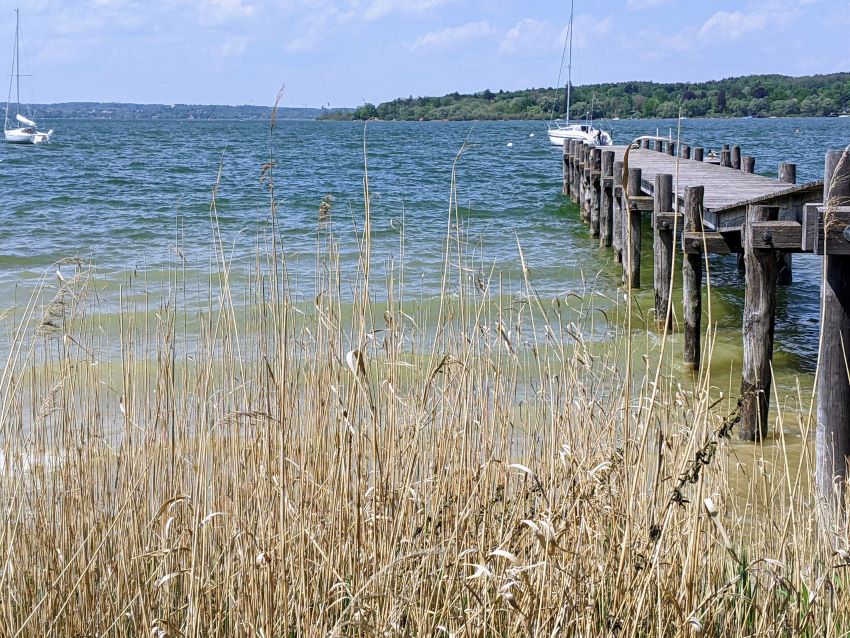 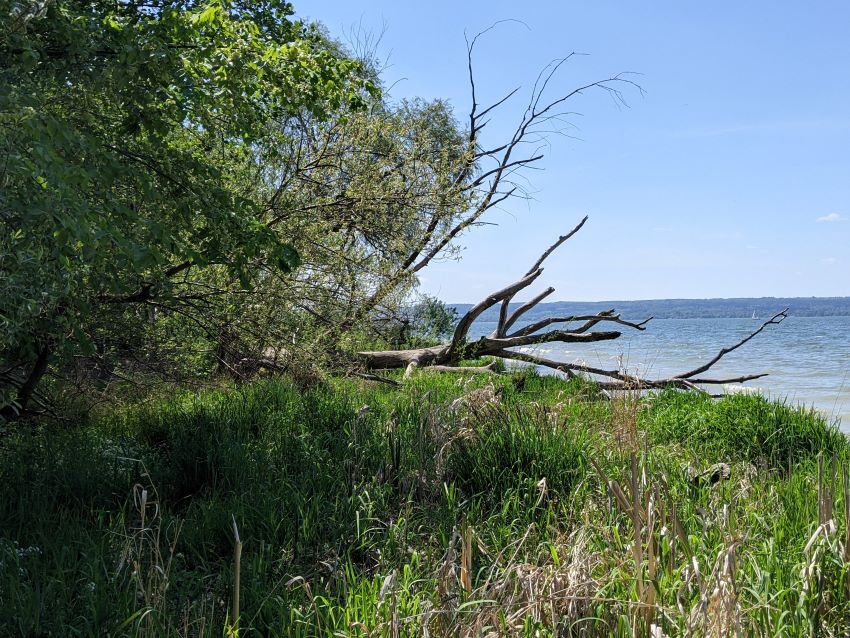 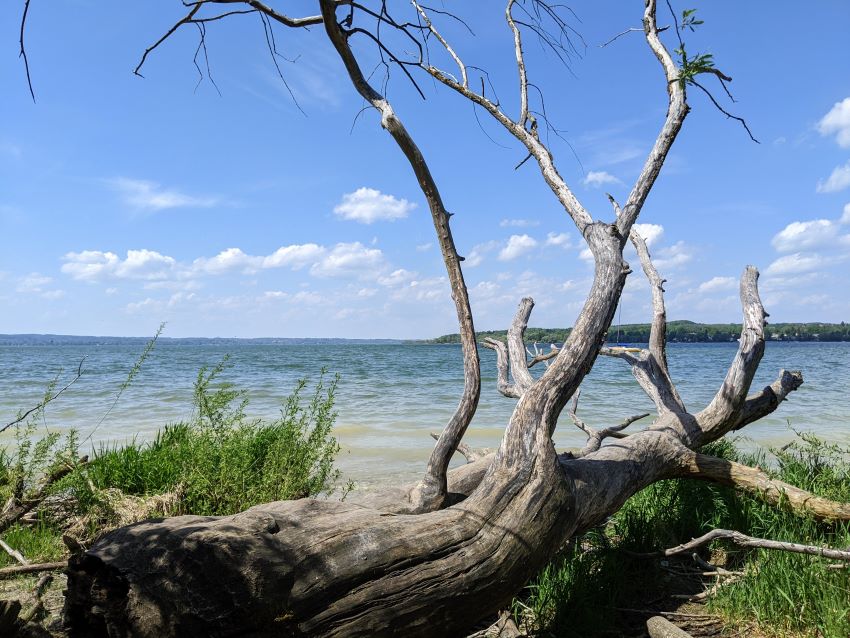 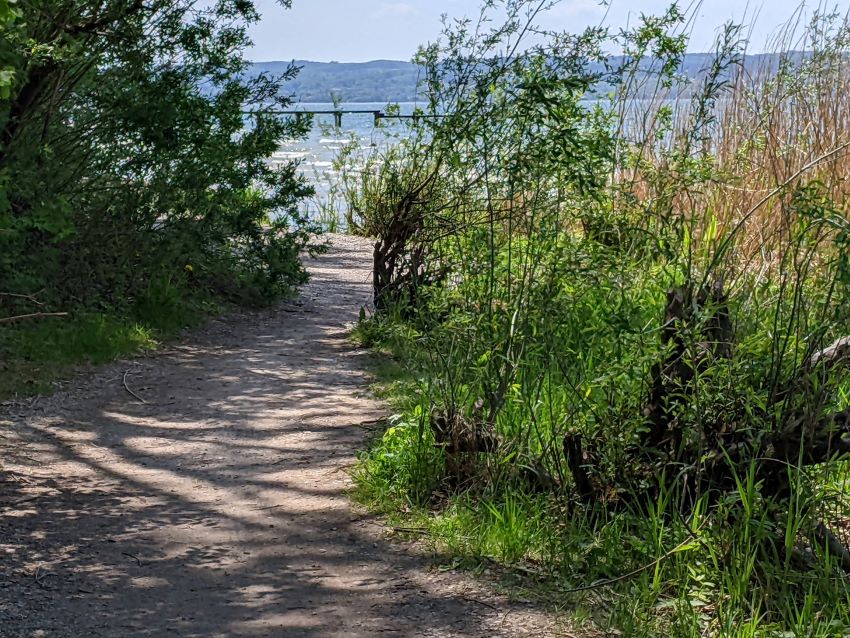 We found a small pebble beach where we rested on a fallen tree trunk, listening to the water quietly sloshing on the small rocks. One of us finally got the splendid idea to take a selfie - there really aren't many pictures of just the Geek and myself. 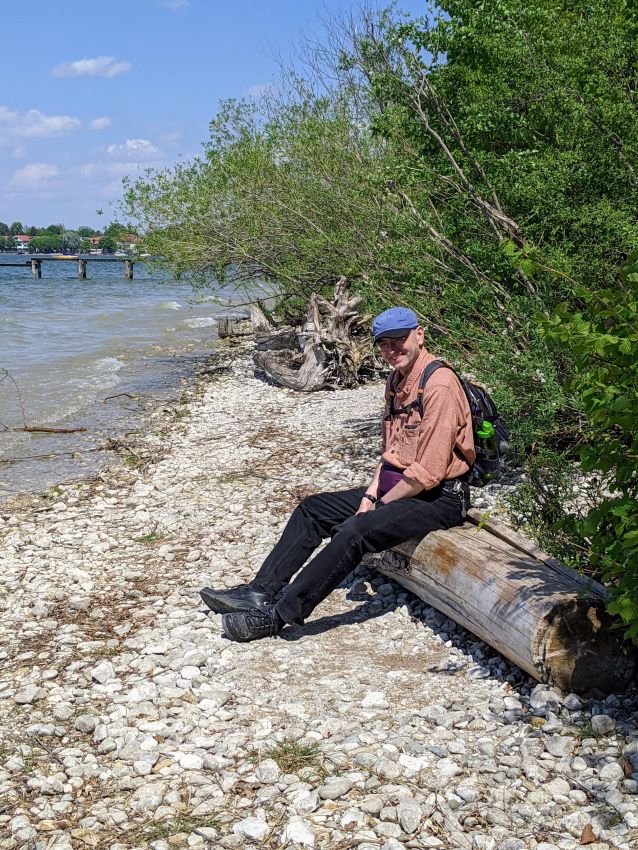 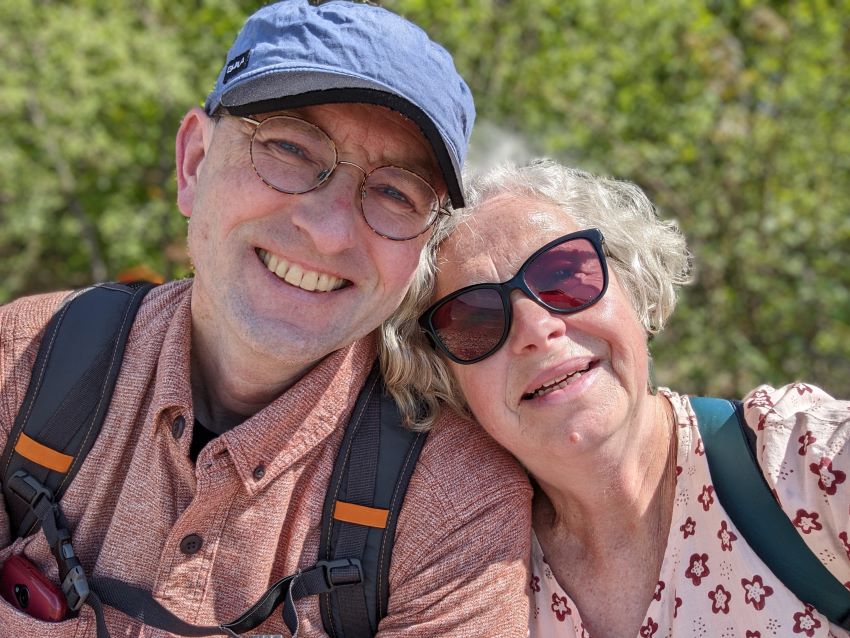 While we sat there, Kaefer sent us a WhatsApp that she was on her way and about to meet us near the Seejungfrau. So we slowly made our way back, noticing a few things we hadn't seen before - like these fungi on a tree. I am not sure whether this is Laetiporus sulphureus - I am not a fungus expert at all. 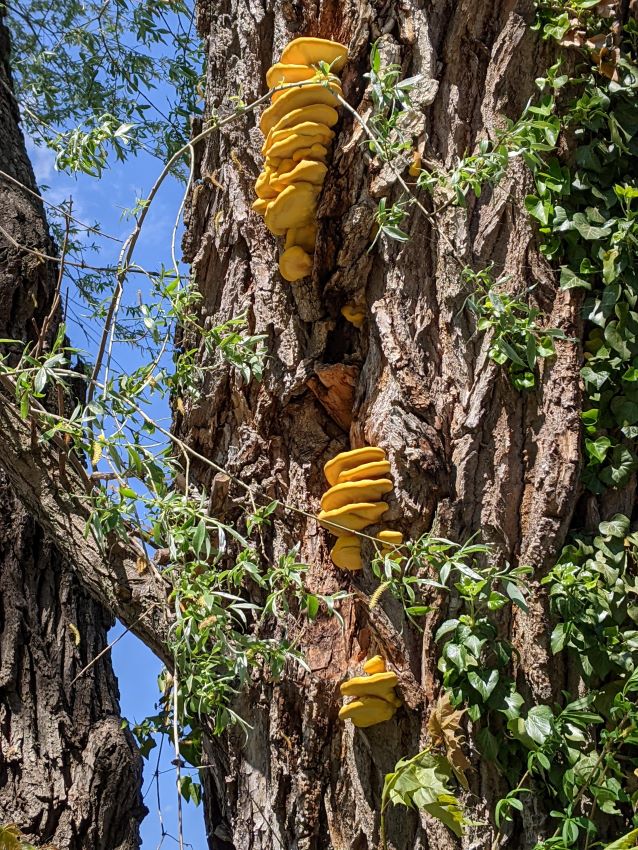 When we met Kaefer she also got some gelato and we sat on a bench, looking over the lake while chatting with each other. She told us that she sometimes comes out here in the evening just to watch the sunset. Here are her takes (the first shot was taken by her friend from Canada): 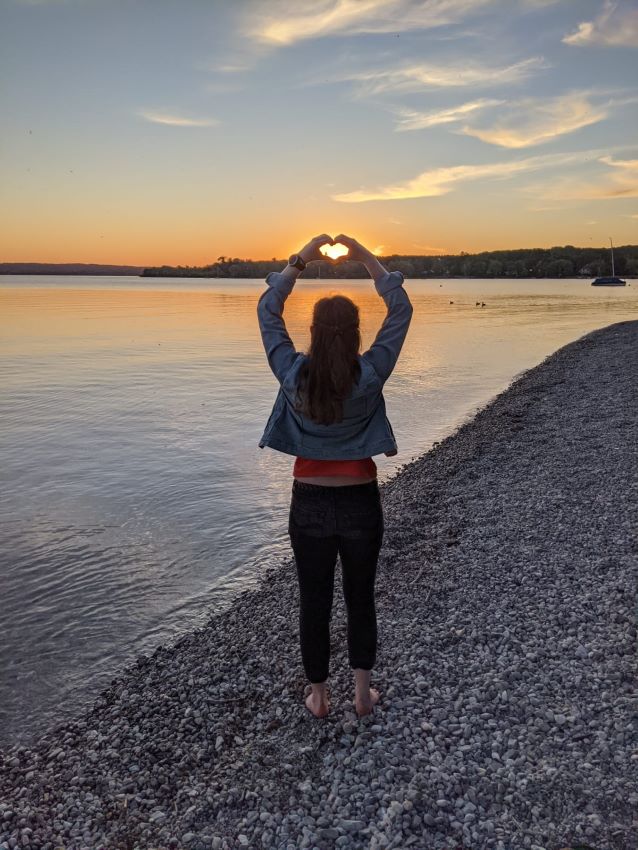 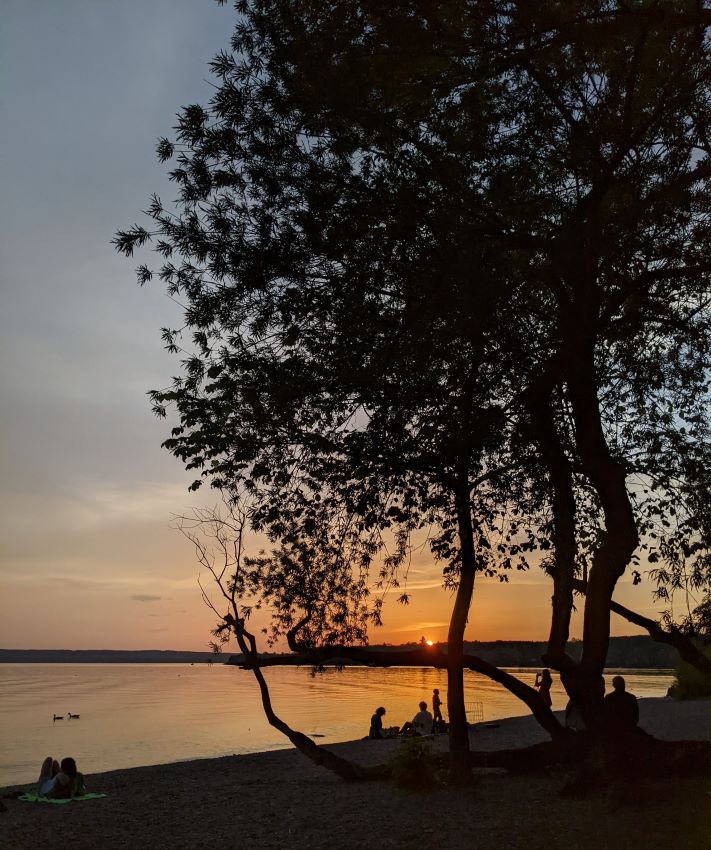 We didn't stay for the sunset though. We were getting hungry; our stomachs were grumbling. I remembered a lovely brewery from many many years ago in a village not too far away from München, and after checking whether it had a beer garden and was open (yes to both) we took the S-Bahn to Aying where this brewery was. The beer garden was 15 minutes to walk from the station - I love how you don't need a car if you live in a place that offers fantastic public transportation.

I remember the restaurant of the brewery offering delicious food, but we opted for the beer garden which is cheaper, but also more limited and frankly, not quite as good. The Geek had roast pork with potato dumpling while Kaefer and I chose the cheese Spätzle (a Southern German kind of pasta) with fried onions on top. The beer was excellent - both the Geek and I had a Weißbier and Kaefer enjoyed her huge Apfelschorle (apple juice with mineral water). 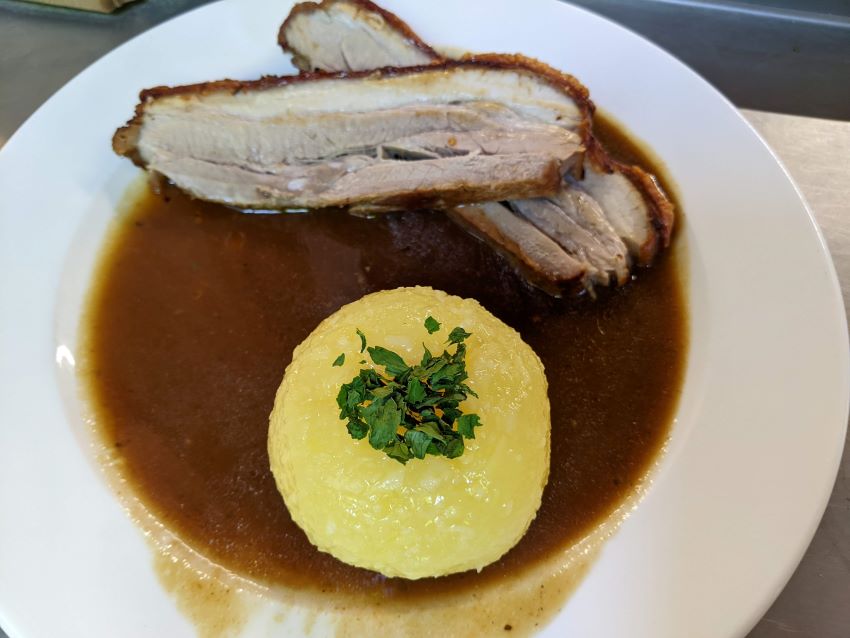 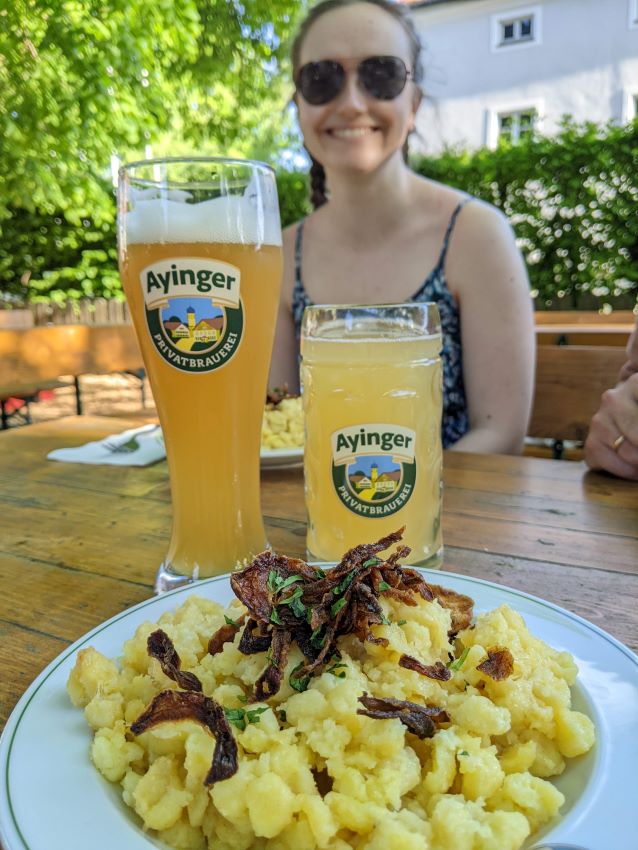 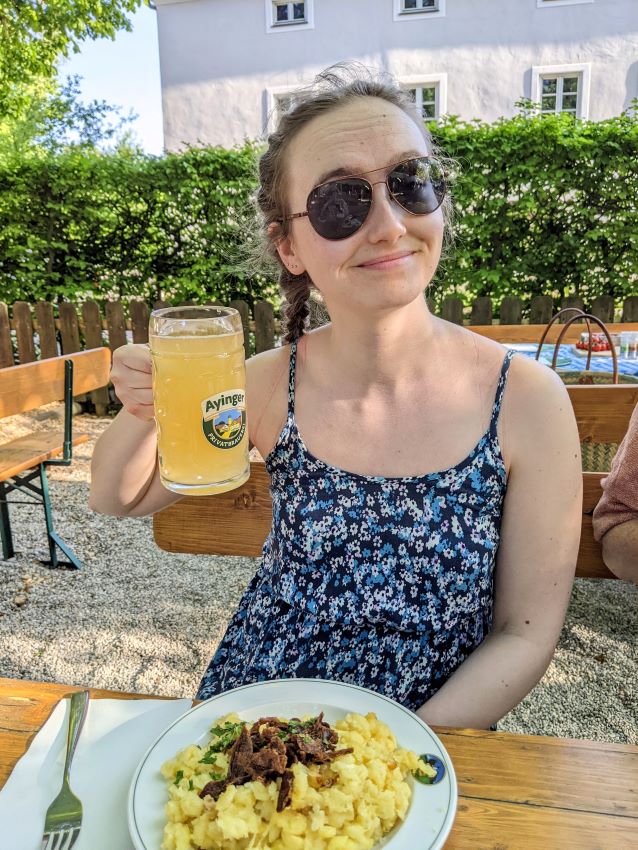 Time by the water is always restorative isn't it? Thank you so much for sharing these bits of what I am sure was a truly wonderful day.

Such a beautiful lake and area, your photographs are stunning.
I love the photograph of the two of you :)

Time spent by the water, makes one hungry and thirsty. Kaefer seems to enjoy her pasta and drink. Prosit!

I love the bronze sculpture of the little mermaid on her catfish. It looks like you had a great walk. Thanks for sharing. Happy T Day.

Wow, that beach is BEAUTIFUL! Fab scupture, fab looking beer, and fun looking food. I am Jealous! The Nerd and you are adorable together. Fun pictures. Hugz and happy T-day!

Here in Ann Arbor, a large number of German people immigrated from Swabia around 130 years ago, and maintained lots of German customs -- so in our local restaurants we always had Spätzle. And my German son-in-law makes wonderful cheese Spätzle as his Augsburg family does. SO I enjoyed hearing that you were in the Spätzle area of Germany.

That is such a pretty lake Carola. And it sounds like a really lovely day out, and yummy dinner too. I've heard of spatzle, but never tried it. It does look delicious. And that is a wonderful photo of you and your husband. I'm glad you shared this with us at T day.I hope yours is wonderful. hugs-Erika

Such a beautiful lake and I really loved the sculpture too of the mermaid and her catfish.
The lake we live on is manmade and all the houses and business's go right down to the lake-so no way to enjoy a walk along the lake like this one, so I am loving this area.
I enjoyed all of the photos too-Happy T

What a beautiful area in which to walk. I enjoyed te area that had the path to the lake and the sculpture, too. Your photos showed a lovely area and what I'm sure was a relaxing walk.

That pasta looked wonderful. I'm sure you enjoyed your beer, but I would order what Kaefer did, the apple juice with mineral water.

Thanks for taking us with you to that lake and to the beer garden for beers and juice for T this almost Tuesday, dear Carola. Loved your selfie, too!

This really looks like you a very, very wonderful and happy day!
Thank you for sharing those pics! Love the water.
Have a wonderful T.

A delightful and relaxing time beside the lake. Love the photo of Kaefer taken by her Canadian friend.

I would have chosen the Spätzle, too, yummy! I think Ammersee is beautiful, and I like it better than Starnberger See. It's a great place to walk and enjoy. Thanks for the wnderful photos, too. I must visit my friends in Münich again! Happy T Day, hugs, Valerie

Lovely walk. I think I needed to take a walk along the water. Thanks for letting me come along.

You are certainly giving us a wonderful tour of this part of Germany, Carola, and it all seems quite exquisite, especially for me whose entire experience of Germany has been of missed flights at Frankfurt, ultimately costing me an entire day of my vacation. The scenes along the lake are very appealing and the ability to do this without driving a car is a real bonus. I am curious about the mermaid. Aren't mermaids supposed to have a fishy lower half? Perhaps she is a sea nymph! As for the food, it all looks delicious. I am looking forward to more coverage of your trip. Take good care - David

The lake is very beautiful and so peaceful. Cute selfie. So nice to be able to get to places with good public transportation. Dinner at the biergarten looks delicious, too. Happy T Day

Carola you always remind me of the treasured time hubby and i spent in Europe.. We used the public transportation often. It was reliable enough for me to use it to go to work.. My daughter 2-4 at the time loved the yo yo buses we called it.. The elderly people on the bus would give her candy and she learned to say thank you in German and we would say goodbye to the bus driver in German.. Fun times.. You walk along the beach looks lovely ! And what a beautiful picture of you and hubby.. thats a keeper for sure! And German food... aaaahhh... We cannot find good German food in the US.. or at least not like we remember it.. Happy happy T day Carola!! Hugs! deb

Wow! What a lovely place. The bronze is pretty amazing too. You have made some wonderful memories. Have a great day today.

What a wonderful place for a walk. The phrase "easily be reached by public transportation" makes me jealous. Happy T Tuesday!

Wow, that's such a beautiful place to visit! The lake looks so peaceful and I love the bronze sculpture - amazing 😀. Your meal looks delicious too and that's such a lovely selfie of you both too. Wishing you a very Happy T Day 😁. Hugs Jo x

Carol thanks for the info on the Shirley poppy. I hope it does return next year.

You enjoyed a lovely outing at the lake, Carola, and really enjoyed seeing the selfie of yourself and husband. Yes, it is wonderful to have such great public transportation without the need for a car. That was a happy photo of your daughter who undoubtedly was enjoying the time with her parents.

Somehow I feel invigorated merely looking at those lakeshore pictures! The selfie is lovely.

What a lovely place for a day out, looks like you have the weather for it too. Everything looks great and you all look like you are having a great time. Prost! Happy T Day! Elle/EOTC xx

What a beautiful lake and photos of it. And the sunset! Biggest sigh! Best of all, all those very happy faces. (And I love the mermaid, too!). What a grand holiday you have had!

What a nice walk around the lake. Looks so peaceful there. These are cute photos of your daughter, especially the one with the sunset. The German pasta looks delicious. Nothing like Italian pasta though I imagine. The sculpture you came across is interesting. That sounds fun to take the train and a walk to the lake. And a cherished photo of the two of you to remember this wonderful time you had.