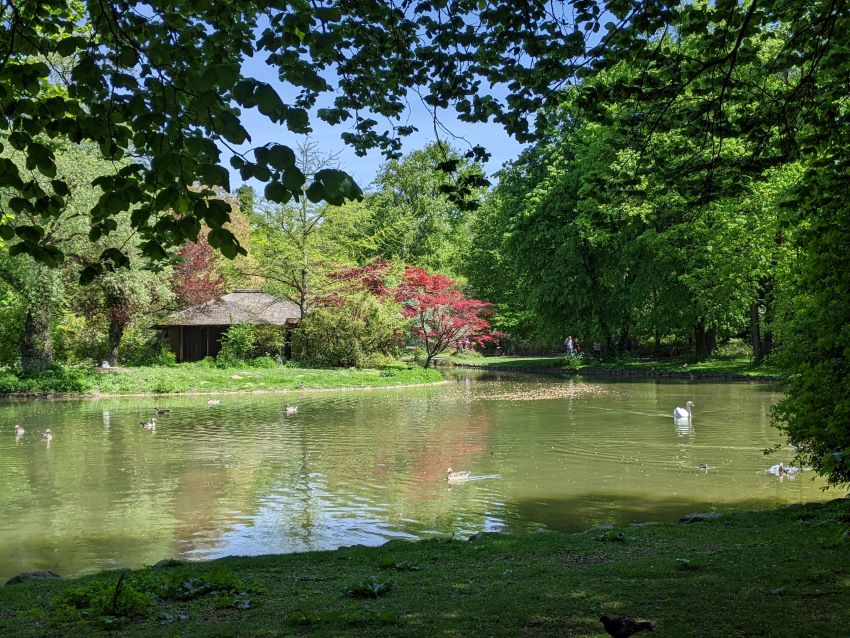 Have you heard of Englischer Garten (English Garden)? It is a public park in the center of München, just west of the Isar, the river that runs through the Bavarian capital. Englischer Garten is one of the world's largest urban parks and even bigger than Central Park in NYC, and it is just a short walk from downtown's Marienplatz. The name refers to its English garden form of informal landscape. The Southern part is the more popular one whereas the Northern part, called Hirschau, is much quieter. The park is 5 km long and runs parallel to the Isar. 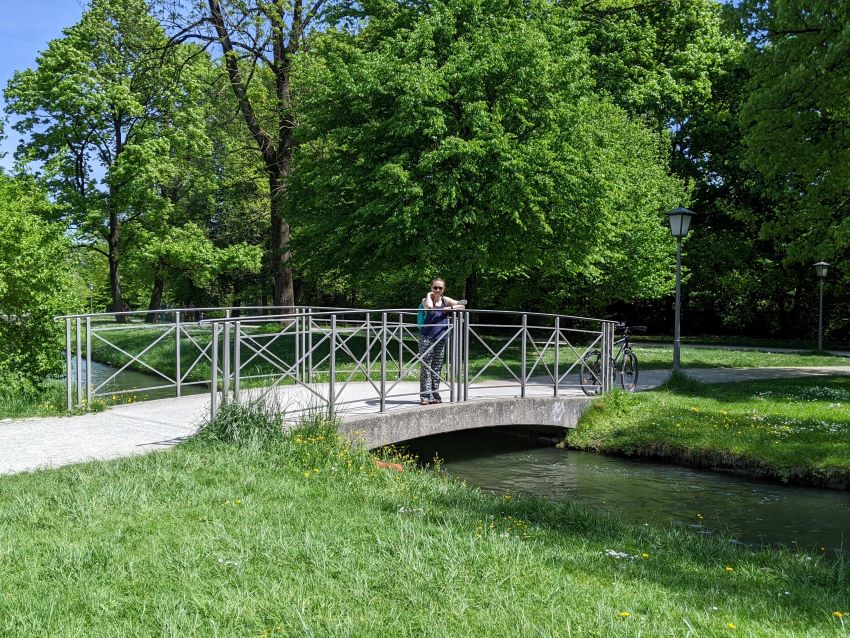 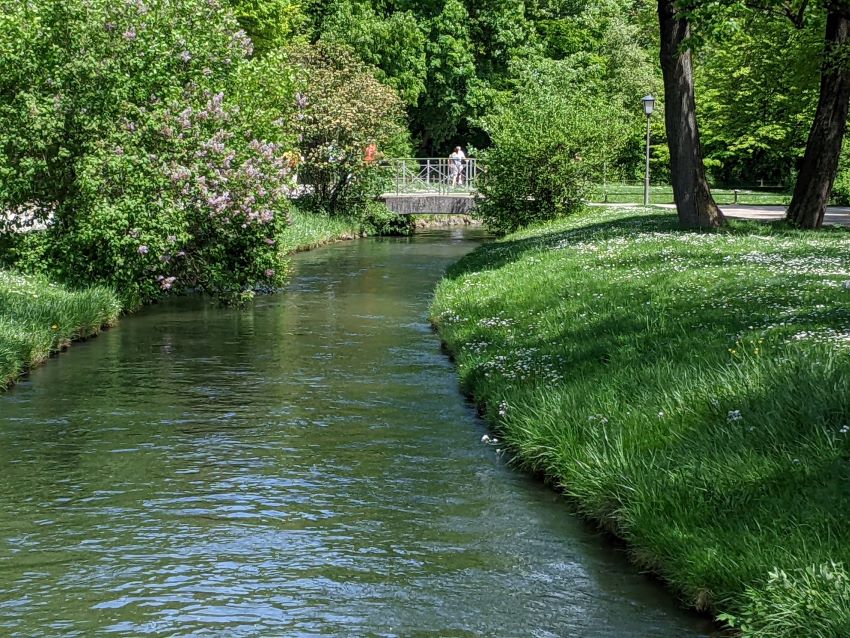 It has streams, lakes, wide lawns and meadows, old trees and some popular attractions like the Monopteros temple, the Chinese tower and, of course, a beer garden. We ARE in Bavaria after all. One of my favorite places was the Japanese teahouse. 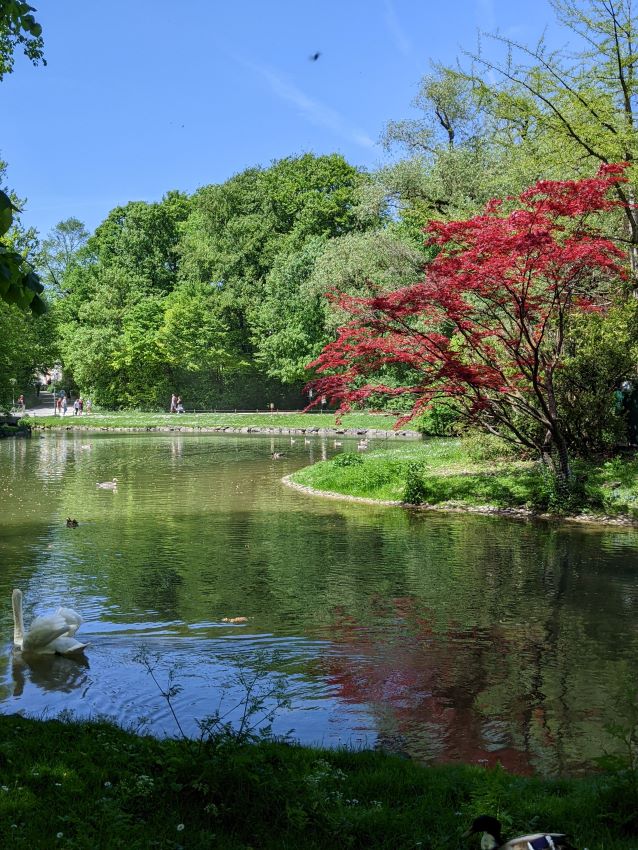 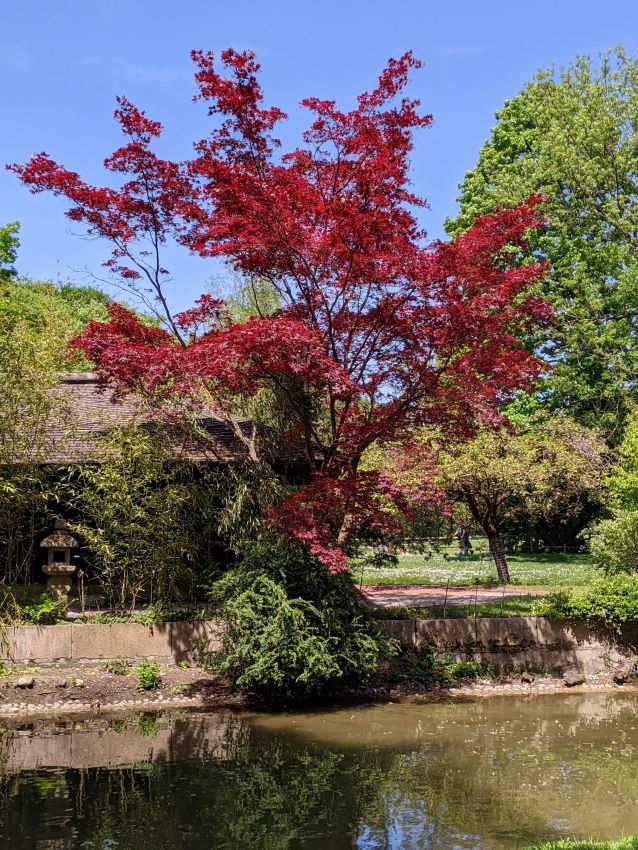 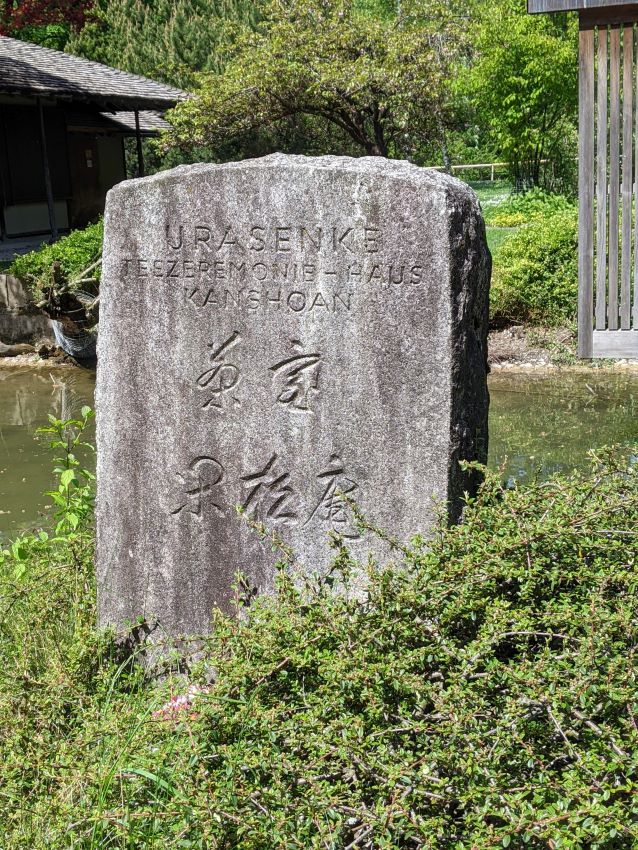 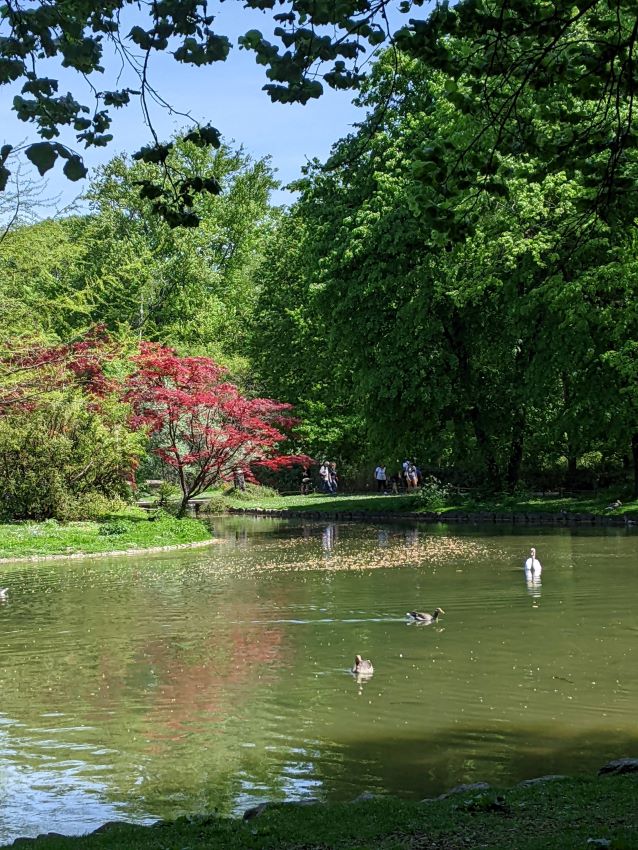 The Japanese teahouse and a Japanese garden were created in 1972. It was the year of the summer Olympics in München - those of you old enough will probably remember them and hopefully not only because of the horrible massacre in the second week of the games. Sapporo in Japan was the place of the winter Olympics in the same year (at that time the summer and winter games took place in the same year, but in different countries) and has been a partner city of München ever since. The Japanese teahouse was created in order to celebrate this partnership.
Throughout the park there are lawns and meadows to rest as well as trails meandering through the trees. 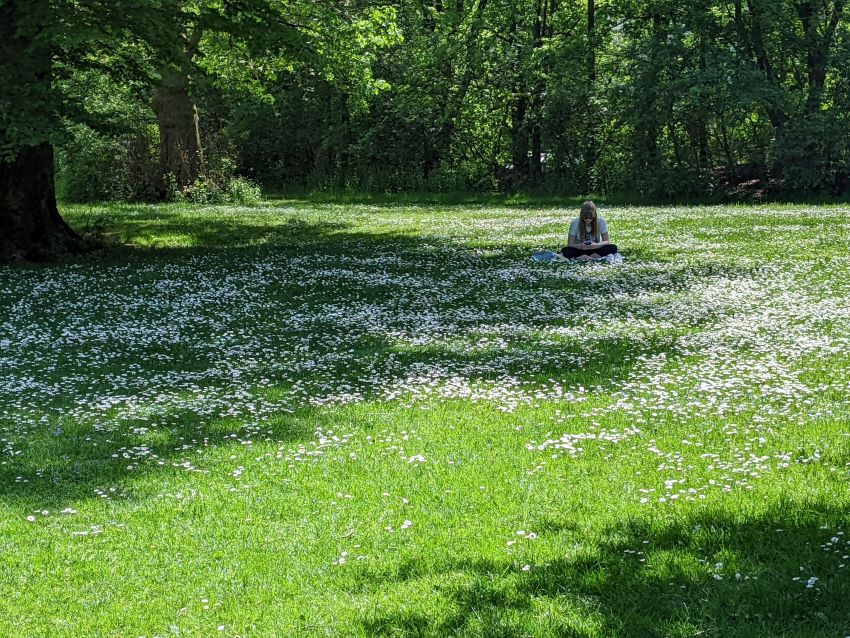 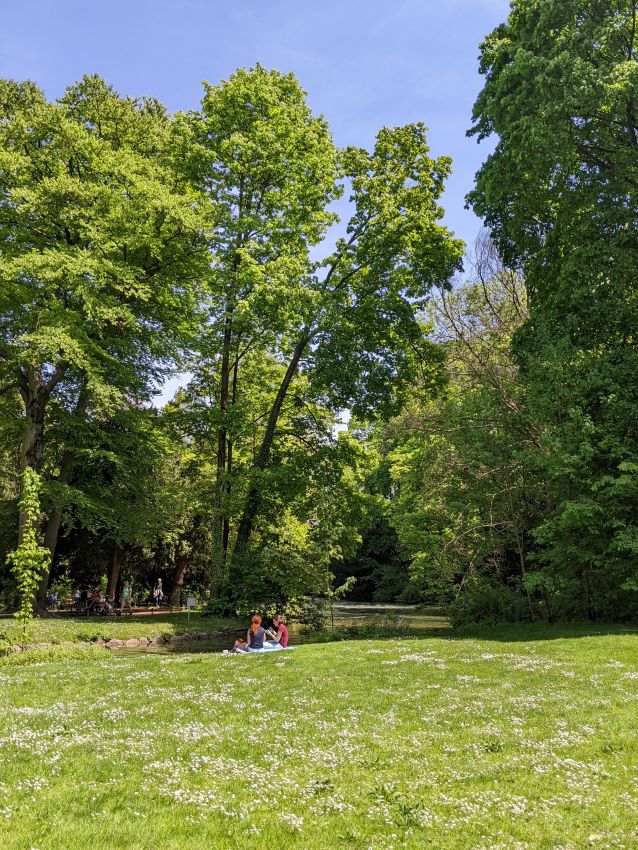 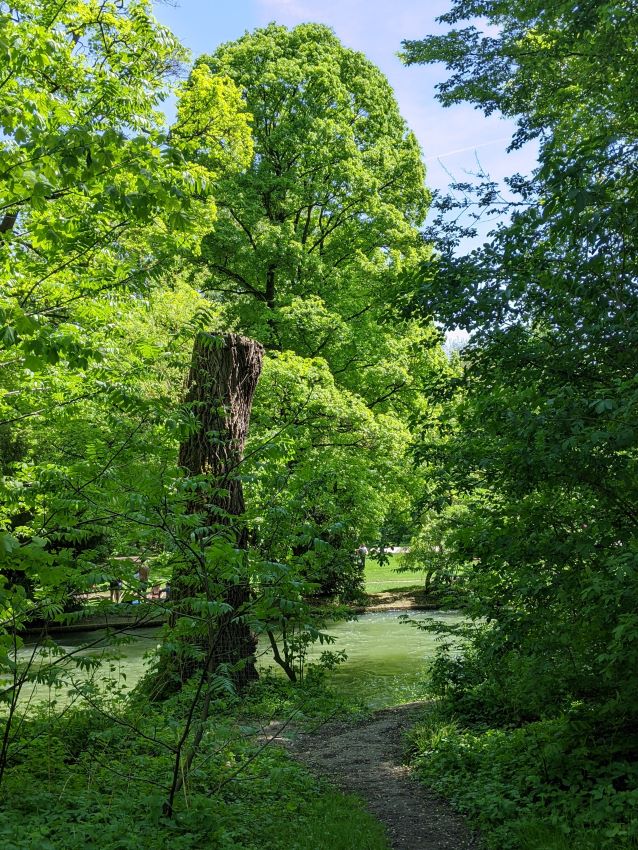 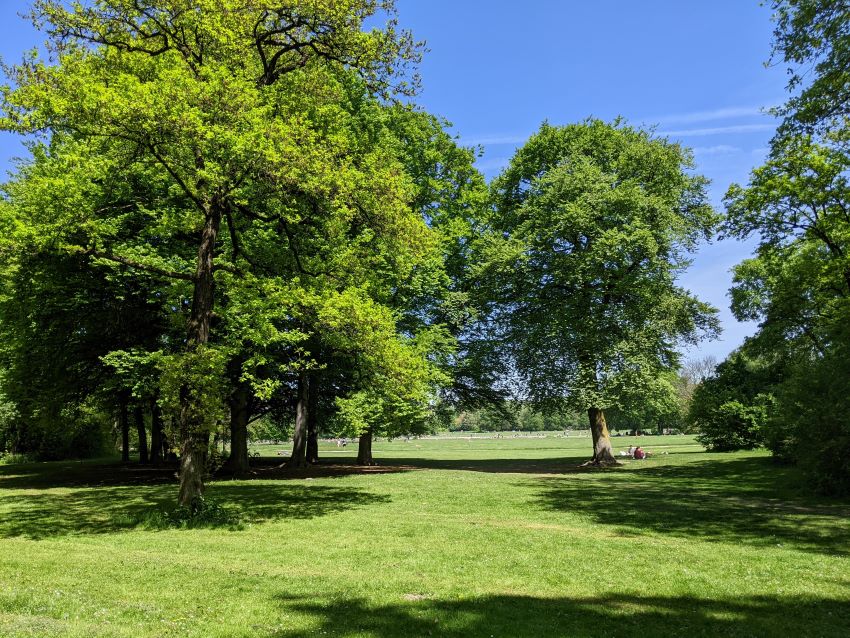 Do you see the swan sitting on its nest? 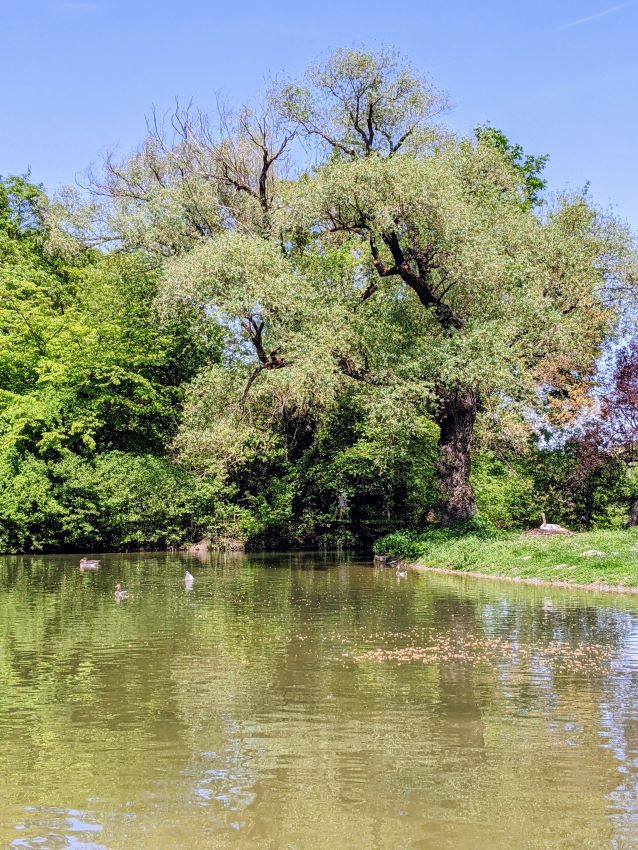 This is the Monopteros temple in the background. If you think you see people in the nude here, you are correct. A fairly large part of the Englisher Garten is "nude area" where you can just drop off your clothes if you like - and it's not only the young and beautiful. Remember, we Germans aren't particularly puritanical. 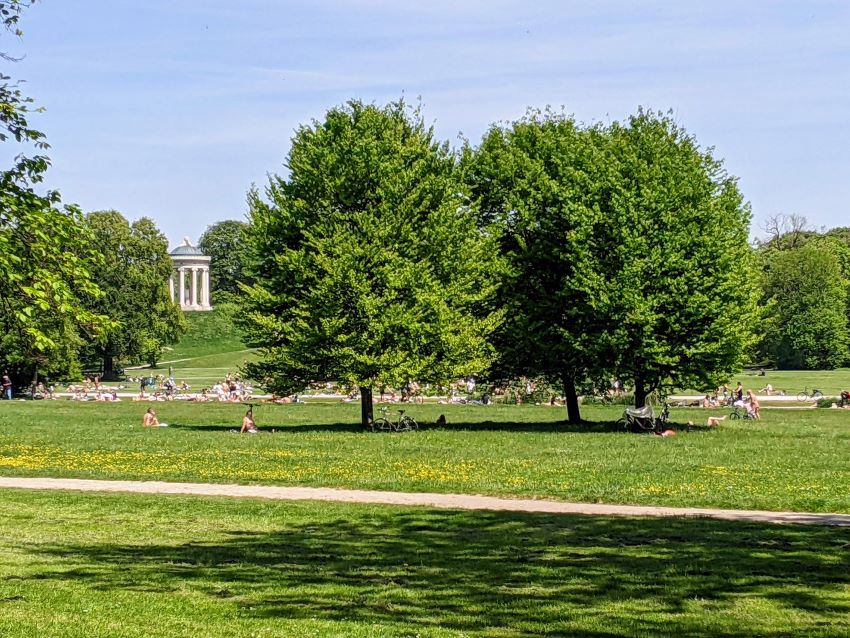 Like any other park, Englischer Garten has its share of Greylag Geese, and I also spotted what I think is a Bar-headed Goose (if I'm wrong, I hope that David will correct me). 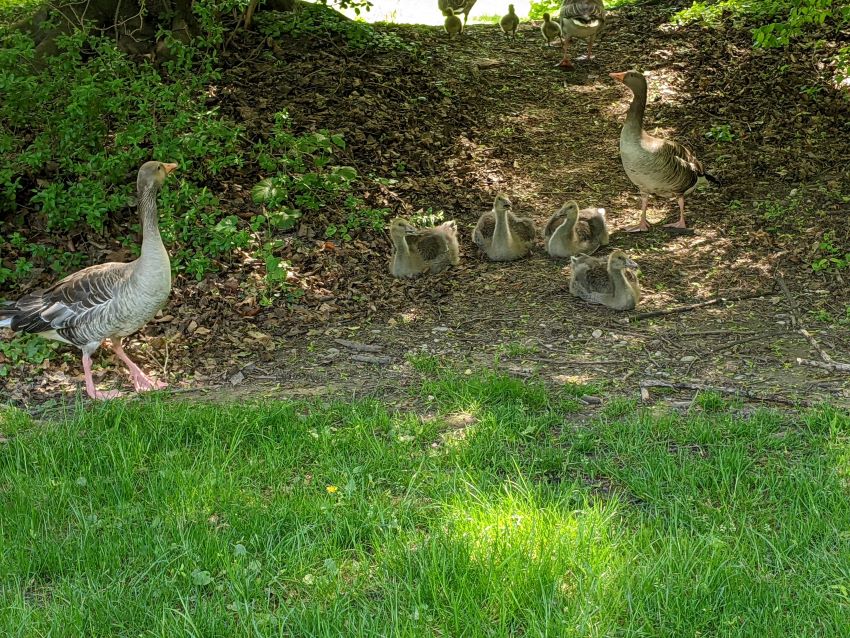 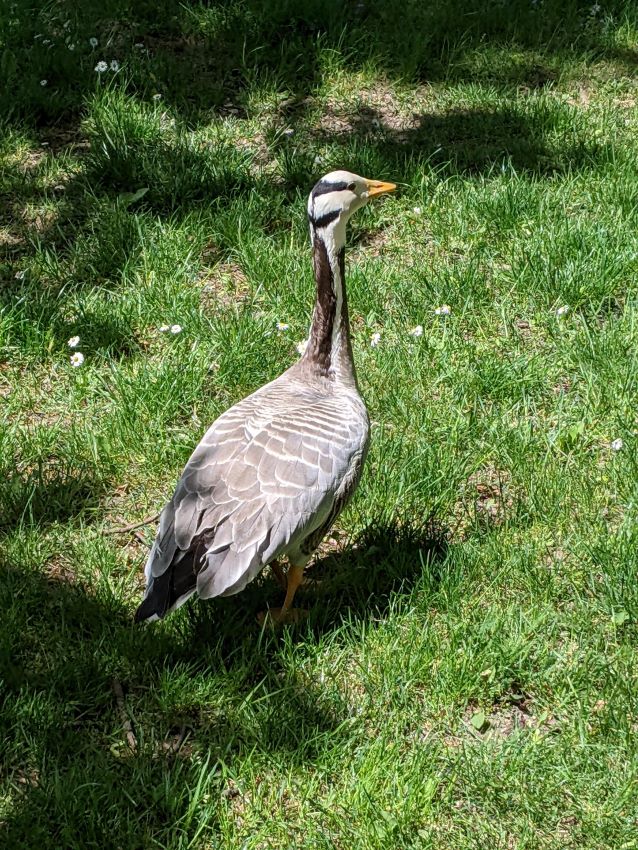 But the most exciting part is Eisbachwelle. 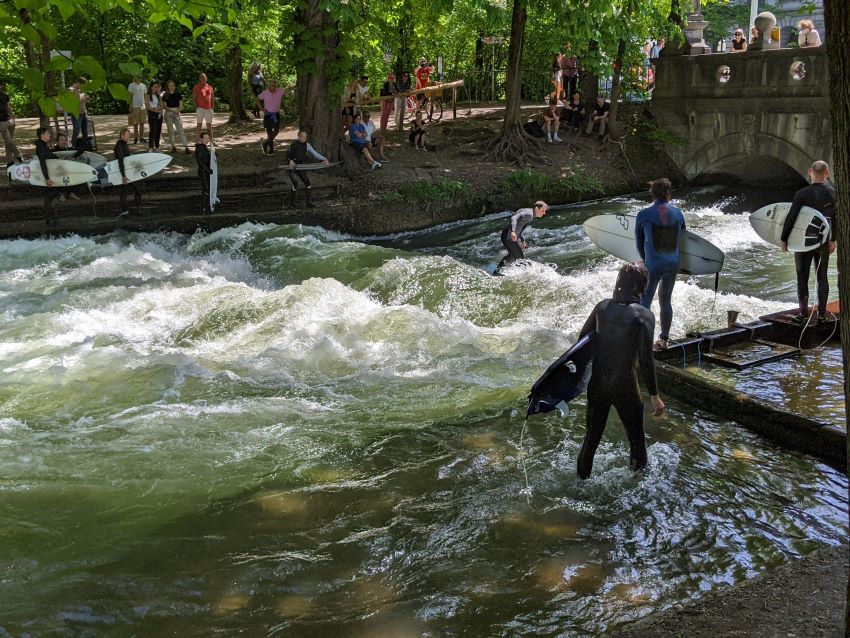 Eisbachwelle is a standing wave in the Eisbach (ice stream) that is produced by the change from laminar to turbulent flow. This is where Munich surfs. On both sides of the stream surfers wait with their boards until it is their turn. Each surfer surfs for about 30 seconds and then drops out voluntarily so that the next person can go in. The surfers take turns alternately from the left and right side. I was impressed how well this works and that no one hogs the wave for more than 30 seconds at the most. 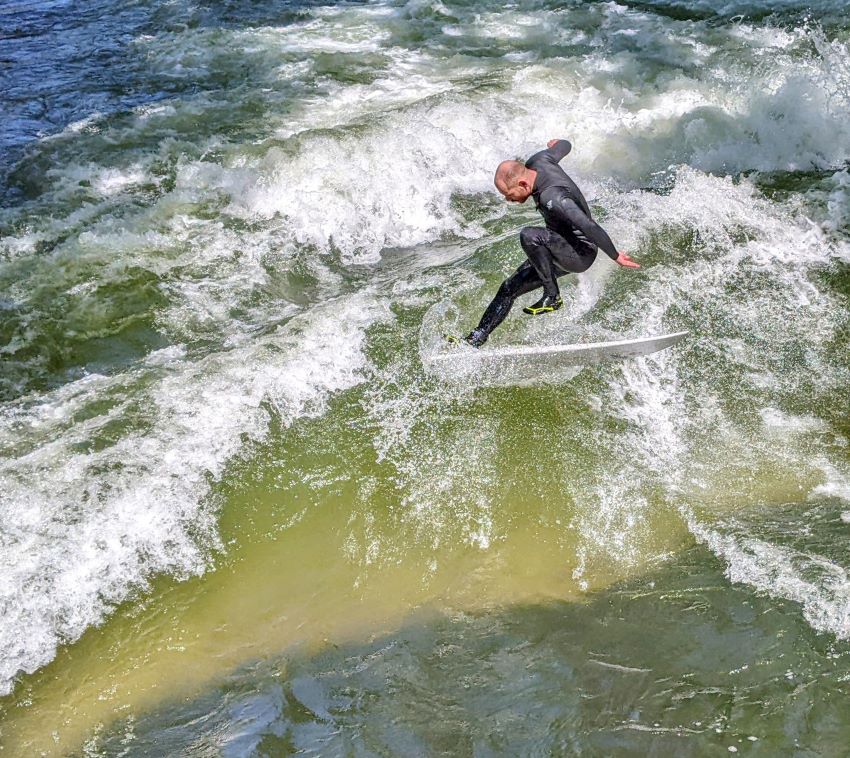 Now, as someone living close to the California coast I am used to seeing surfers - riding the waves of the Pacific. What I saw here at Eisbachwelle is a far cry from the Pacific Ocean, but boy, you need to be good for this. Really good. 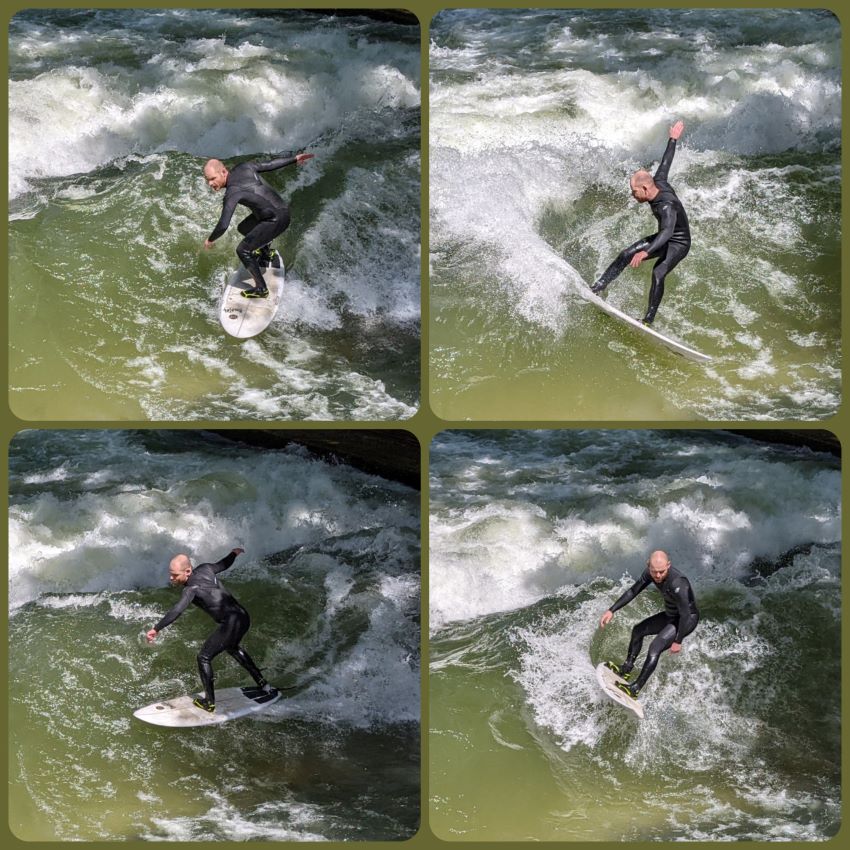 I am including a few short videos so you can see the real action - and just look how great these women are!!!
Maybe you need a rest after this. Let's hang out in the hammock for a while. 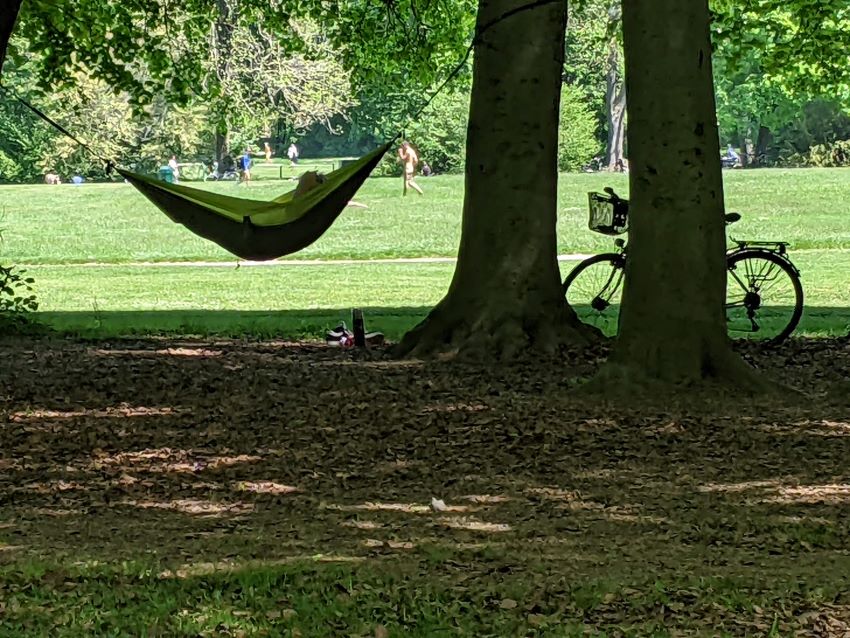 I'm linking up with Rain's TAD.

It looks and sounds delightful - and yes, those surfers are VERY skilled.
Thank you.
Sadly yes, I do remember the Munich Games, overshadowed by the tragedy in the second week.

Hello Carola: I have no doubt that I would have a fine time in this park, although I might feel a little nervous walking by the nudist area with my binoculars on display! I have no doubt that I could do some fine birding there, especially in the area you describe as being quieter and less used. Until your recent series I had no idea that Munich was such a beautiful city with so many attractions. As for your geese, the ones in the first picture are Greylag Geese, and quite correctly the second image is of a Bar-headed Goose, not native to central Europe, but found in waterfowl collections around the world. It is a very handsome bird. I have really enjoyed your posts on your visit to Munich, infused as it is with a touch of nostalgia, and I am sure many others have too. Your command of English is impressive. With my very best wishes - David

The English garden is indeed beautiful, and visited there a few times. But I didn't see the surfers, they are brave! Yesterday I was in a restaurant by the Rhine and we watched surfers being pulled by speed boats, not for me! Hugs, Valerie

This is a gorgeous place and what fun tying to surf. Thank you for sharing it.

What a really relaxing and beautiful place- wonderful photos! And that surfer- amazing!!

This looks like a lovely park, and I like that it is fairly large too. I think it's great that people can get nude in the park. I'm not sure I would, but it is nice that society is open enough to accept that. And that surf area looks popular. It doesn't look really large either, so I suppose people take turns That's what it looked like in the video. And it must be a great place to people watch. Hope your week is going well. hugs-Erika

Beautiful gardens the surfing looks fun (for the surfers).

I can see why you like this park so much -- it's absolutely beautiful. But the surfing is a big suprise. I would never have expected surfing in Munich!


Wishing you good health, laughter and love in your days,

A ShutterBug Explores,
aka (A Creative Harbor)

I enjoyed your beautiful photos of the park. It really looks like a great place to spend a summer day.

All that green wide space sure does remind me of my homeland beautiful park just like here in England, minus the nudist part. I loved how you stopped to give us a pause with the hammock under the shaded tree. Beautiful summertime post, thank you for sharing. Happy TAD Tracey.

Perhaps Angela Merkel too visited the nude area of the English garten:).
I saw a picture of her as a student at the nudist camp in Costinesti (Romania).
Not bad at all!.

...life particularly in urban areas would be bleak without parks. Green spaces help people maintain their sanity! Thanks for sharing.

I was thinking as I perused through your post that this was a lovely peaceful place to walk ... then suddenly we come upon a group of nude people ... Oh my. In my area people would go into shock (a bunch of prudes, right?), but that was okay with me. I am sure at my age being nude in a park would not suit anybody, but hey, to each his own, right? Meanwhile I am think what a wonderful place to relax and then suddenly I spot people surfing ... Wow! I don't live near an area where surfing would work, so this is exciting. And, I agree, the women are awesome as was the man, but, what can I say. So you have geese I have never seen, though I agree, I am sure David has. That was fun ... all in all, I fully enjoyed my visit with you. I saw things I didn't expect and thought how wonderful it would be to live so close to all of this wonder. Thank you for bringing me along, Carola ...

Andrea @ From the Sol

what a great place. Both nature and wildlife as well as a waterfall to enjoy. I would love to visit this place.

Hi Carola!! ☺☺ That is such a lovely park...so beautiful. And so well kept too! Oh the surfing, what a neat thing to have! I don't have the balance for that kind of water sport...and likely not the physique lol! Thanks for sharing the beauty of the English Gardens!!! ♥

Such a beautiful garden and the surf and surfers were very impressive.
I enjoyed seeing your photographs.

Such a lovely place to spend a summer's day.

Loved your gorgeous photos of the park.

Those surfers were really fun to watch! A much better view than I get when on the California beaches up here... I have a friend who just started a new job for a company that makes the technology for those wave machines, but until now I hadn't seen any in use.

I think that park may be where I sat on the grass and ate my lunch, spending the few hours that I was in Munich, so long ago, between train connections.

That stream is very pretty with the charming bridge. That hammock looks so nice and relaxing also. I am from a family of surfers, so me and my son watched the short videos. Thanks for sharing. Surfing there is definitely much different than here in California. This one looks more of an organized sport. In California, the waves are sometimes big and fierce, and it's a great skill to be able to surf and stay up for a long period of time. Surfers in California are fascinating to watch.