I Feel the Earth Move Under My Feet

Do you know this Carole King song? The title of the song became reality for us this past weekend. At 3:20 on Sunday morning precisely. 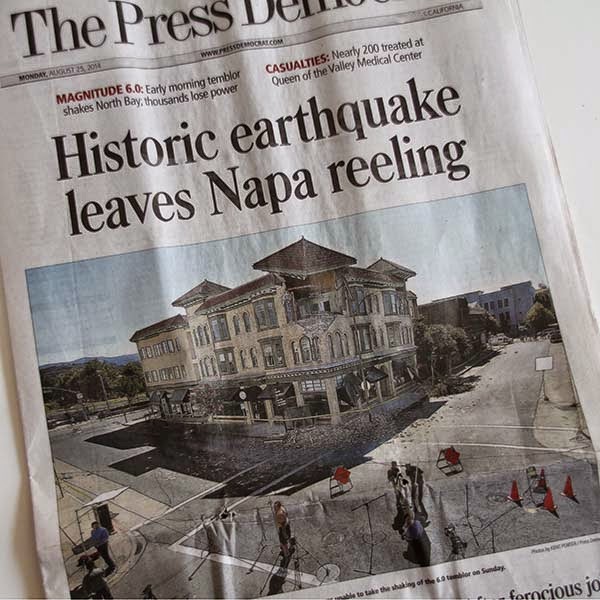 I had just woken up when seconds later I heard a rambling that grew louder, and the house started to shake, becoming more violent the longer it took. Both the Geek and I lay in our bed motionless until finally the spook stopped after a very long 20 seconds.

My first highly intelligent words were "Holy moly". And they were loud. Then we saw a bright flash outside, like some very strong lightning. Our first thought, of course, was our daughter, and we rushed across the landing to her room - I saw our big glass lamp over the staircase swinging from side to side. Kaefer had woken up during the shaking and rattling, "was that an earthquake?", when the second flash hit.

Of course we thought our power had gone out as it happens so often after an earthquake of that magnitude. 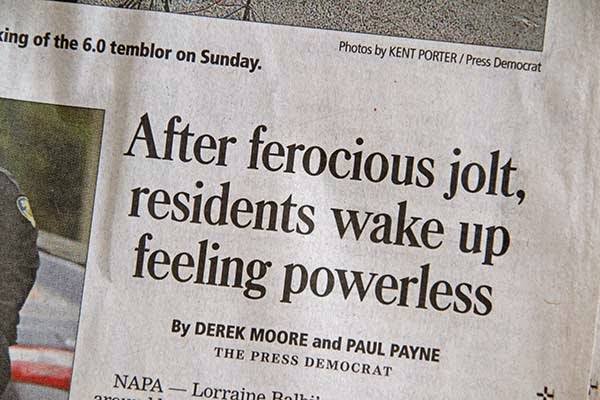 But to our surprise, we still had power; other neighborhoods in our city had not. The Geek then went around the house, looking for gas and water leaks. Nothing. We were more than grateful.

Our next move was to go to the USGS website and find out where the earthquake's epicenter was and how big it was. All we knew by then was that it was a bigger earthquake, bigger than anything we had felt in California so far (the biggest being 4.3) and also bigger than the earthquake I rode through while I was living in Taiwan in the early eighties, which was a 5.6 and pretty scary for me at that time (that one had also happened during the night). 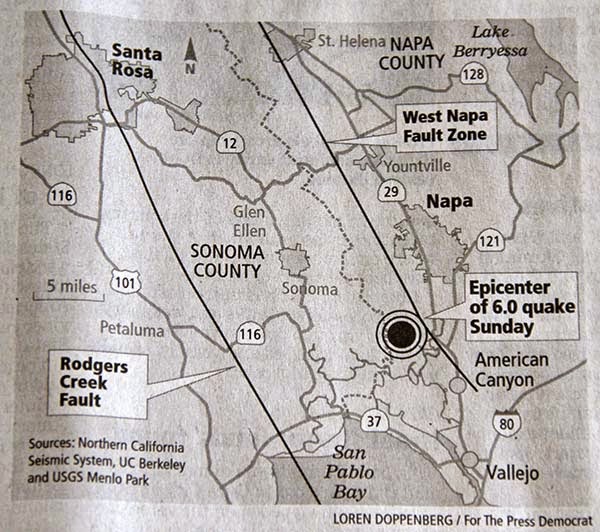 The epicenter was in American Canyon which is about 25-30 miles from our home, as the crow flies. Its magnitude hit 6.0 on the Richter scale, some even say 6.1. A magnitude 6 temblor has a seismic energy yield of 15 kilotons, the equivalent of the atomic bomb dropped on Nagasaki. In other words, it is very powerful.

Napa was the place that was hit the hardest. Damage is estimated to be up to $ 1 billion. Fortunately, there weren't any deaths and only a handful of people who were seriously injured. We were lucky. This time. 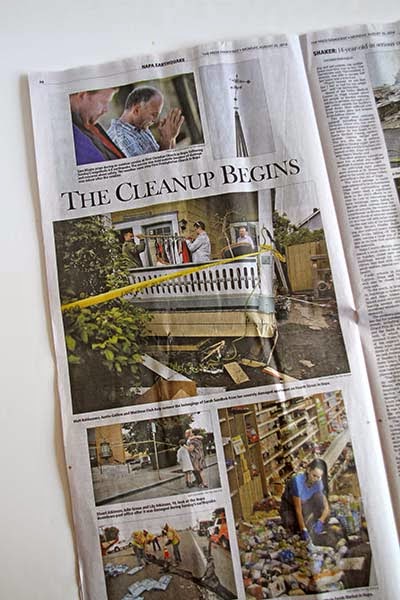 Given that both Napa and Sonoma Counties are wine country, there was a lot of wine spilled. I know of stores in Napa that remained closed because every single wine bottle had fallen off the shelf. Some tourists were so spooked that they cancelled their wine tours and tastings, and headed back east instead. But as they say here - the show goes on. 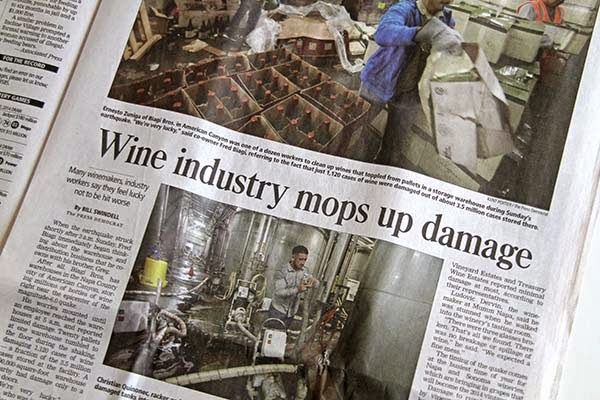 As I already mentioned, we were lucky. If you live in California you know that the earth can move and shake under your feet, without any forewarning. Many of us are aware that the BIG ONE will happen sometime in the next 30 years - that can be next week, in five years or in twenty. We don't know. We only know that this one wasn't IT. Although it was the biggest earthquake in the Bay Area since the Loma Prieta earthquake (6.9) 25 years ago.

But we can be prepared. We have an emergency kit in our garage that contains a lot of water and food plus our camping gear (let's just hope the garage doesn't collapse). Batteries, flashlights, a radio. Blankets and a big tent.

I hope we will never need it.

Glad to know you are all okay, just a bit shook up. (couldn't resist, sorry).

One of my nephews and his family live in Napa. Their house is a mess, and structural safety a question, but they are safe. Which is what matters. I have only ever experienced a very baby earthquake and can only imagine just how frightening it is for all those who experience the big ones.

Unpredictable earthquakes are always so scary. I am glad your family and house are OK. You should have a basket under all beds that contain sturdy shoes so you can walk on glass and debris, flash light,s hard hat and gloves to remove debris. My city of Manhattan Beach has classes and we "are all supposed" to be prepared and know what to do. I am so sorry for injured people in your area. Last evening, we had a 3.0 that was centered in the ocean, off Palos Verdes. Another reminder that anything can happen in the blink of an eye.

Hi Carola. We just felt a jolt here in Modesto, not enough to get us out of bed. Luckily no one was killed, thank God for that. Unfortunately wine prices will sky rocket. Glad all is okay with you. I didn't know you lived so close to Napa. Take care and I love your photos on Flickr.:) Thanks for following me too.

Thinking of you and so pleased you are all okay. Hope everyone affected is able to regroup and rebuild. It sounds like your community are very resilient. We had one here in 2008 - 5.2 - during the night. I too exclaimed loudly, whilst Meg took it all in her stride.

So glad to hear you are OK after such a shock. It's good to hear there was no loss of life but there must be a whole lot of alcoholic mess to clear up in the Napa Valley. What a waste! We did a wine tour when we visited CA so I am picturing the extent of it all.
Love Jo x

Glad you are all okay and no damage was done to your home. Living on the island of Crete, earthquakes are a part of life, and we get a few every year. Having lived here for over 25 years now, I am not as easily spooked when they occur, but always 'shaken' up just after, waiting for after shocks. Like you, we have been told that the BIG one has not happened - yet.

So glad to read that you didn't get any damage there. We certainly felt it here in Berkeley! It was a wake-up call for us, as we hadn't completed our emergency plan or restocked our kit. Now we are more prepared, but pray that nothing happens for another 20 years or so.

i am glad you were okay at your place - even to keep power! wow!

sorry about the vineyards, though. mother nature can be harsh!

Glad you didn't have any damage. We felt the rock and roll here by the Bay as well. Friends in Napa are safe, their building is ok, however the inside of the apartment is pretty well trashed, most everything broken.