I have decided to join in Susannah Conway's August Break again, but a little differently. She has offered an entire list of prompts that we can use or not. I will try to work along those prompts although this might not work for every day. And other than she supposed, I will not take a photo each day but use most of these prompts as an inspiration for telling you more about my trip to Europe.

Today's prompt is "lunch" - so let's talk about British food! We're not starting with lunch but with breakfast.
This is a Scottish breakfast that we had in Edinburgh - with haggis, black pudding, sausage, bacon and fried egg. It was pretty good, I liked both the haggis and the black pudding (blood sausage). 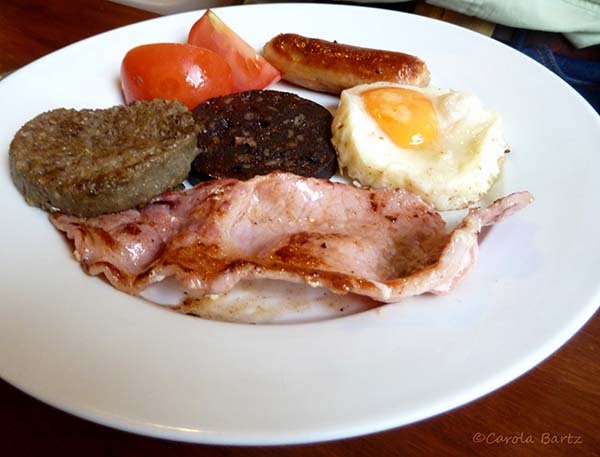 The breakfast in our farmhouse bed and breakfast in the Cotswolds looked like this - fried egg, sausage and bacon like in Scotland, but also baked beans and mushrooms, plus grilled tomatoes (the tomatoes in Scotland weren't grilled). 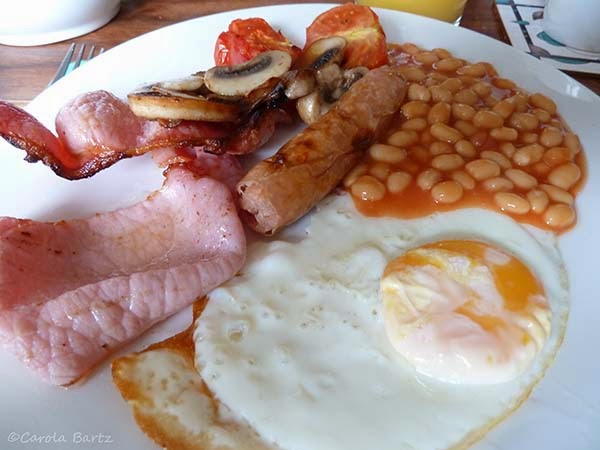 Both to go with tea, of course, served in a beautiful pot. Oh, that is tea with milk - the only way I can stomach tea (I am not a tea drinker - except on the British Isles). 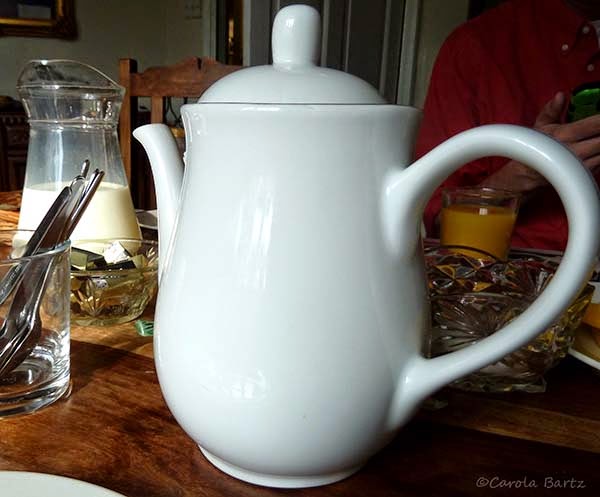 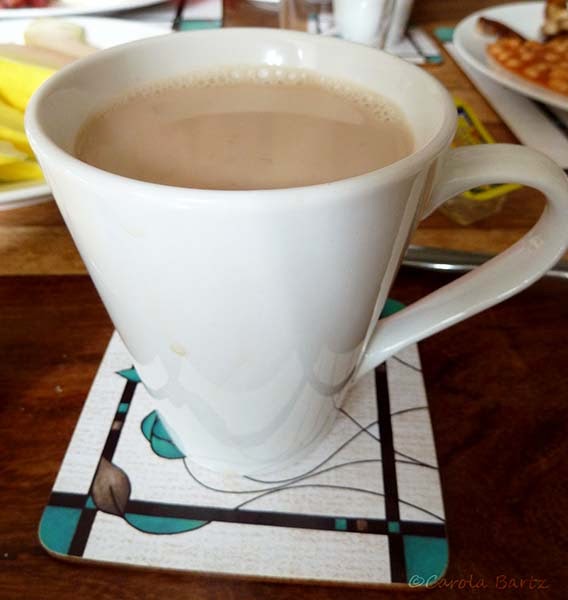 While in England we often skipped lunch and had a real cream tea instead - sinfully rich! Scones with clotted cream and jam - heavenly! 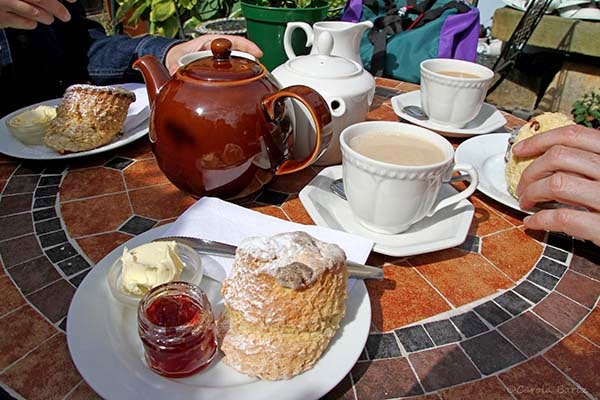 If you don't like tea there's always the option to have a latte instead. 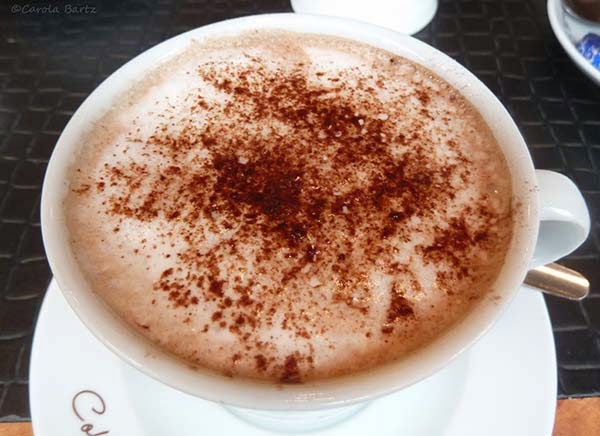 Which leaves us with dinner. Most of the time we had our dinner in a pub since we really like pub food. You can have traditional fish and chips, 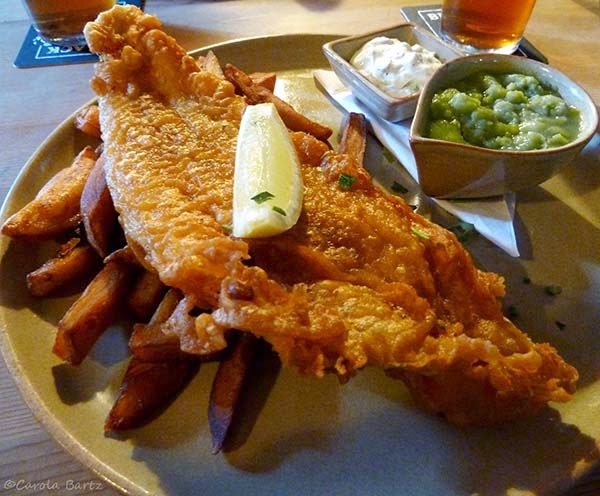 served with beer of course (this is a pint of bitter). 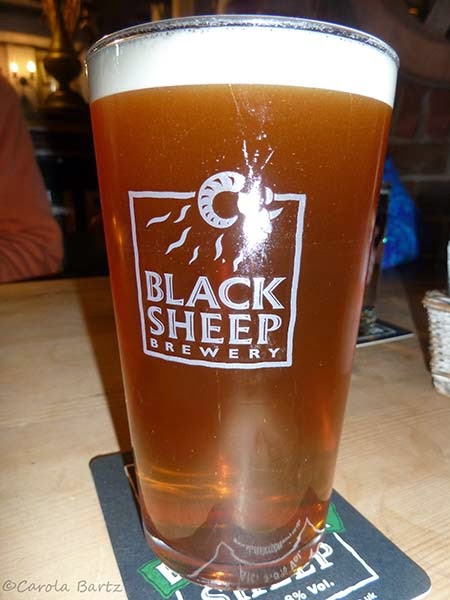 In Scotland the Geek tried Haggis which is so much better than you would think. Haggis is a savory pudding containing sheep's pluck; minced with onion, oatmeal, suet, spices and salt, mixed with stock, and traditionally encased  in the animal's stomach and simmered for approx. three hours. As you can easily see, we had a different version, but it was still Haggis, and most people cringe when they hear of it - probably because they've never tried it. This was the first time that I tried Haggis as well, and I thought it was pretty tasty. 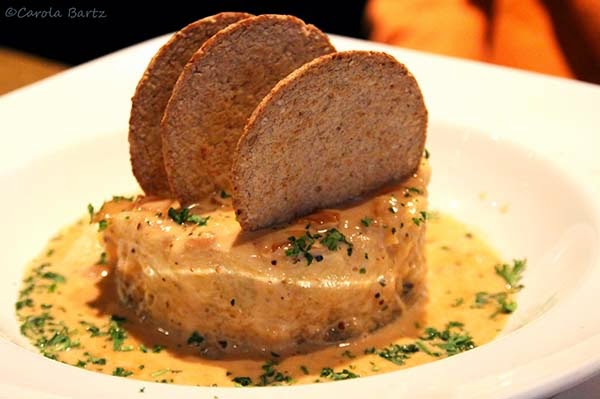 Kaefer had bangers and mash. 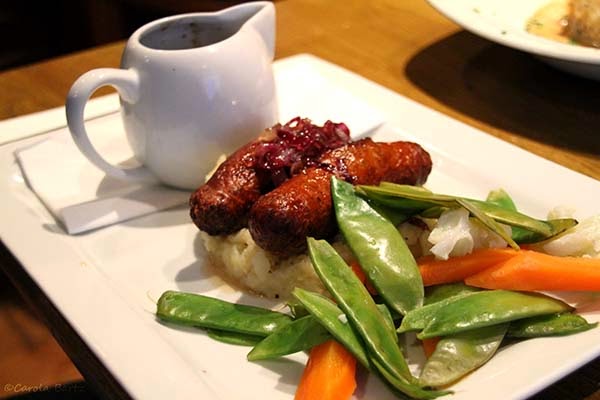 while I ordered the Shepherd's Pie. 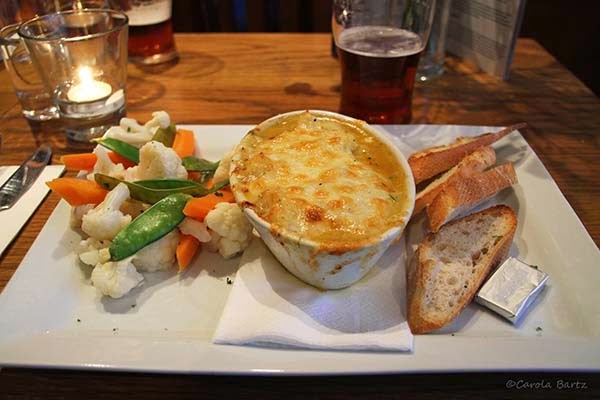 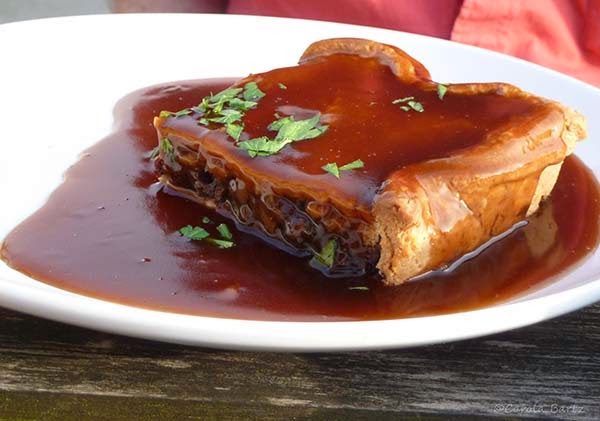 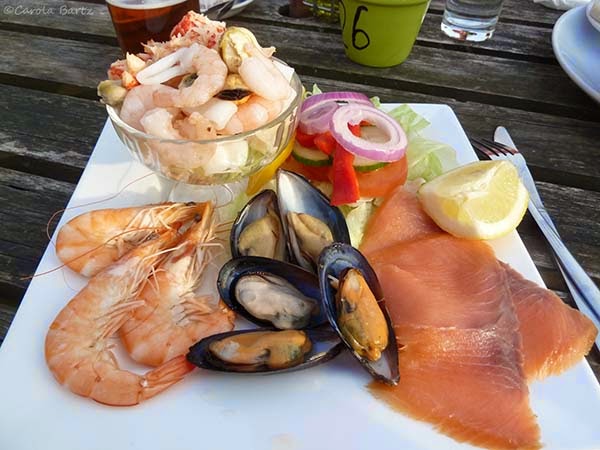 all accompanied by a pint of bitter. 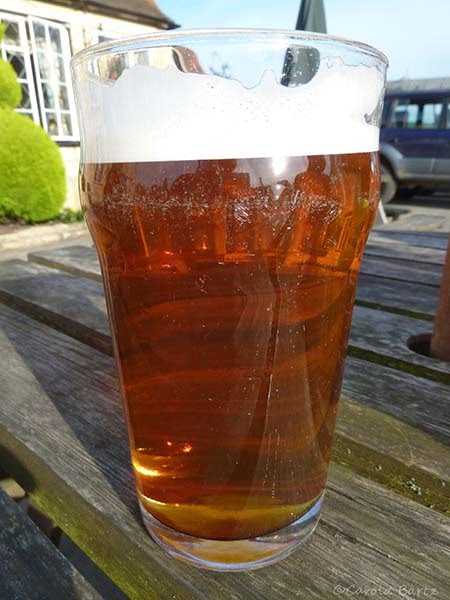 I have never tried haggis (and won't) but have childhood memories of black pudding. Not good memories.
Just the same, simple food cooked well (and presented well) is always a joy. And I would happily consume the vegetable component of all the meals you pictured.

One thing nice about a full English breakfast is that you can skip lunch. I remember how filling and good they were. Your pictures make it all look so delicious.

Enjoyed your english meals and the scones and clotted cream.... yummy looking. I have also started the August break, so will see how it goes. Think you have an interesting take on this!

Once in a while, it is fun to eat english food. Nothing beats Indian and Pakistani food in London, or nice tea sandwiches…in mid-afternoon. I too, will pass on Haggis.

I suddenly wish I could have had a Sunday pub lunch or at least a Afternoon tea.......

I love English breakfast. Yum! And of course tea and some of the beer.

This post has made me so hungry Carol, the English breakfast yum! I'll pass on the Haggis though.. and I'm a Scot :)

I've been to England several times. My brother use to live there. I thought the food was pretty good ;o) Sorry, I didn't like haggis! LOL! The clotted cream is evil! LOL! Hugs ;o)