Can you imagine spending several hours on the road just to have some nice breakfast and buy bread?

Well, this crazy family did.

No French bread. No baguette. Dark bread, whole grains, kernel, rye and pumpernickel. Sunflower seeds, poppy seeds, pumpkin seeds, sesame seeds. Natural sourdough. If it had to be white bread, then we opted for ciabatta or focaccia (which are Italian breads). There are more than 200 kinds of bread available in Germany, and we offer the biggest variety of bread in the whole of Europe (and with that in mind, may I say in the world?).

Bread is the food that me miss the most here. You see, in Germany we have bread for breakfast, lunch and dinner. As a snack. When I pushed Kaefer in her stroller through Tübingen, where I come from, I would pop into a bakery and get her a pretzel (or Brezel as it is called in proper German) and she would happily chew on it. German Brezeln aren't hard, but soft. Perfect for toddlers who make a wonderful mess of them!

So when we heard of a great bakery that sells real German bread in a town a couple of hours south of where we live there weren't any questions asked. It was just "Let's go". We were desperate for B-R-E-A-D !

Today was the day. This is what we had for breakfast: Brezeln, Mohnstriezel and Bienenstich. And real German coffee (strong!). 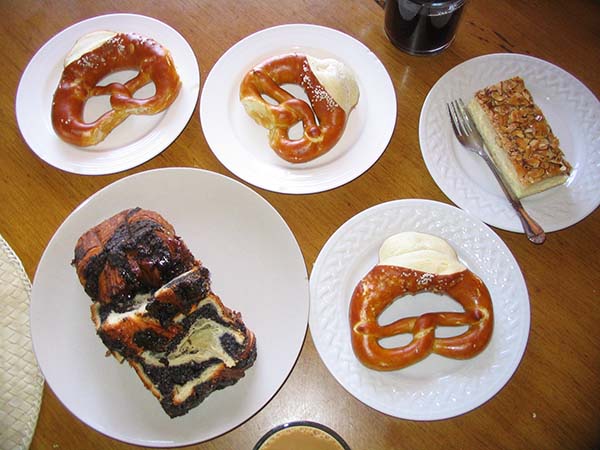 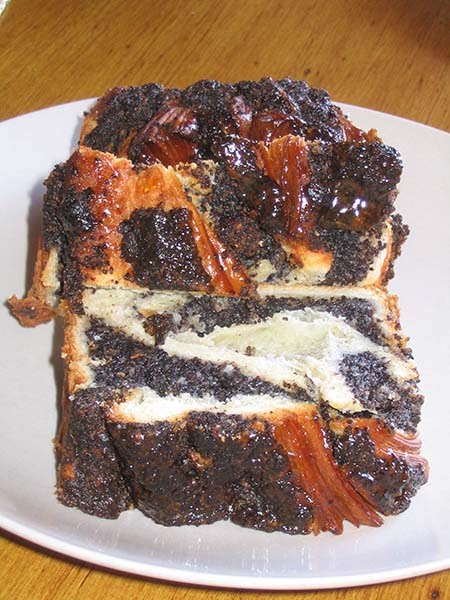 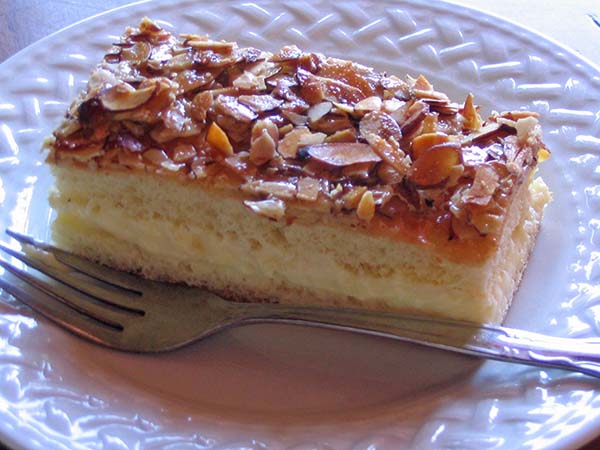 Bienenstich (bee sting)
And this is the little Café of the German bakery (please note the pretzel decoration in the window): 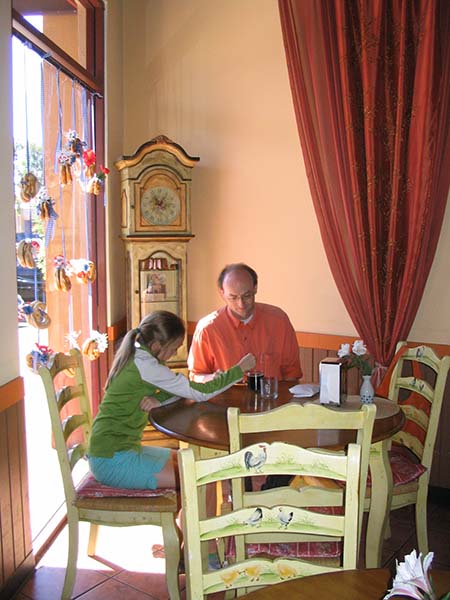 And you know what? Everything tasted super yummy and very very AUTHENTIC ! Just like back home.

Not much bread here, you say? Yeah, that was step number two. Buying the bread. You're in for some real treats. 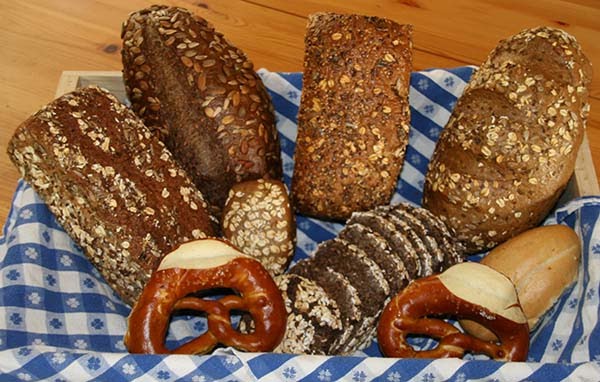 Do you see those pretzels? Real soft German Brezeln? Do you think they taste yummy? 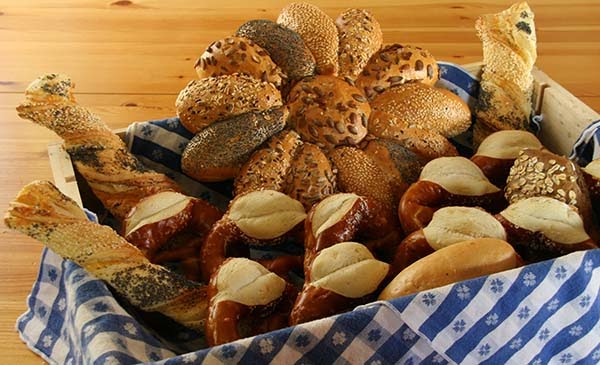 And just in case you want a close-up of that flower thingy (seeded rolls), here it is: 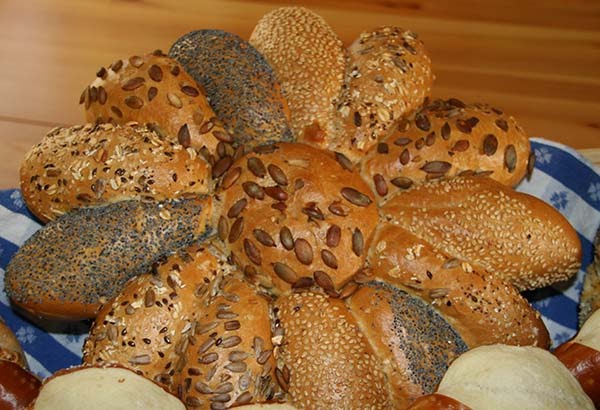 This was heaven for us!
Conveniently enough, there is a German meat deli very close by (actually quite a lot of Germans live in that area - we met so many people from Germany today, and it was really nice to chat along in our native language). Now, you probably know that Germans like their meat, especially their sausages (how do 1,500 sausage varieties sound to you?) - preferably with a good beer -, and even though I am not a big meat person, every now and then I need my meat-and-sausage fix. So we went to that German meat deli, and let me tell you, when we had entered the parking lot of that little strip mall and left the car we just had to follow the smell. I had forgotten about that smell! I thought I would faint, it was so good.

The deli was PACKED. Good for us, so we had enough time to look around and decide about our purchase. And to CHAT. In GERMAN. Wow, what a treat. Just chatting along without thinking of the next word, desperately searching through your available vocabulary and wondering whether you used the right word. Just chatting along, using some slang and those typical German expressions that you can't translate into English. Wishing "Schönes Wochenende" (have a nice weekend) when we said good-bye to each other. And everybody said "This is just like home".

We were served by the owner of the deli. A German himself (of course). We joked, we talked, we could even say how much of the different meats we wanted in GRAMS, not ounces. Wow, another treat! I still know better how much 100 grams of salami are than whatever much that same amount in ounces is.

This is what we brought home: 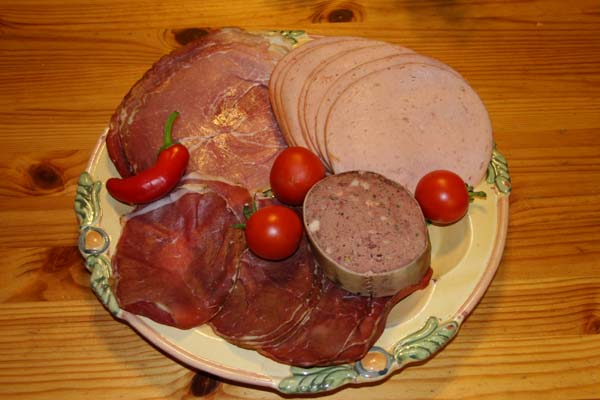 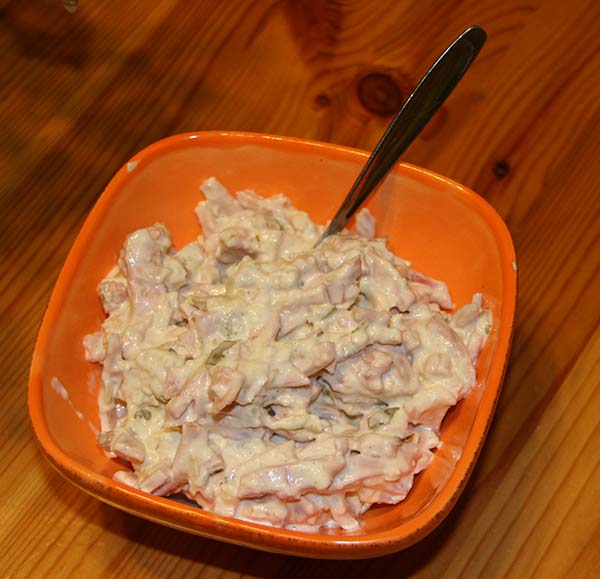 Fleischsalat (sausage salad)
Our dinner turned into a feast tonight. The only thing missing for an authentic German Abendbrot (dinner - it actually means "evening bread", Abend = evening, Brot = bread) is a glass of beer (I had that when we came home after horrible traffic that kept us on the road way longer than expected). We're wine people, and so we shared a bottle of good Californian red wine. 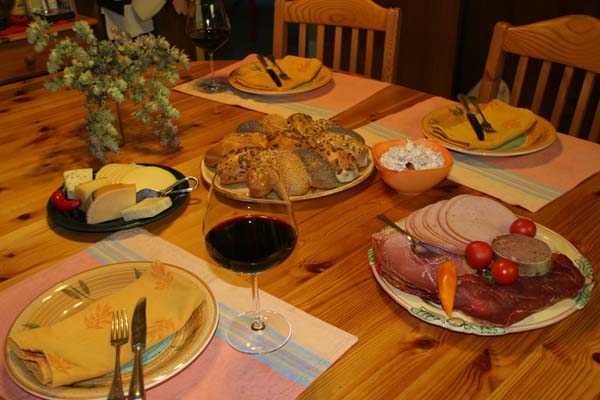 I really don't know why I put the cheese on the table. No one ate cheese this evening. We were carnivores today.

What a great dinner! But a good dinner is almost nothing without a good dessert, right? And a good dessert needs to have at least some chocolate, right? I mean, just a little bit, okay? The rest can be - like - marshmallow stuff? A little bit sticky? And not really healthy? 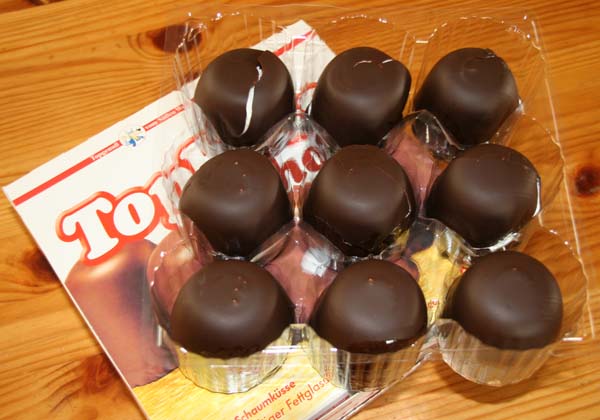 These are "chocolate kisses". A dome of marshmallow-like foam covered with dark chocolate. Very fragile. Unfortunately we couldn't get the real ones. But they were okay. And don't they look tempting? 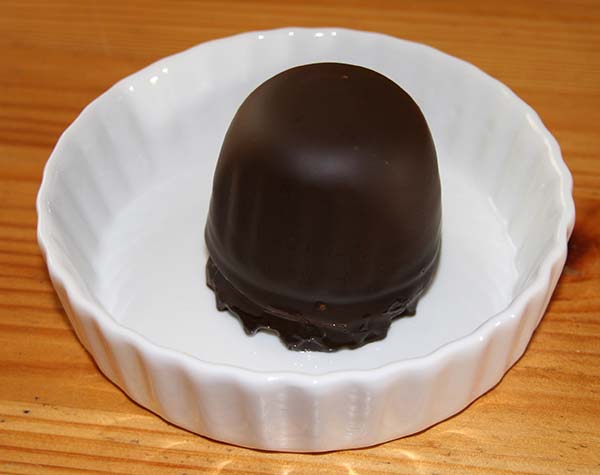 Oh Carola, how I loved this post for so many reasons! I can identify with your need for the taste of your home country, and the willingness to drive a long way to get it. Your feast looks like it was wonderful!!

one of our favourite things in Germany (we visited around the black forest) was the breads! we are also bread fans and i especially love dark seedy breads. i'm so jealous!
i adore Mohnstriezel, although i didn't know it was called that.
yum yum

Take me with you next time!
I'd love to immerse myself in the German language (and food) again! :)
Roxy's Walker

Okay Carola-I am now feeling for...bread and other yummies!! Look at what you did!! I love that "bee sting" pastry BTW...what is that inside..a custard and the pastry looks so flaky...oh yummy! Actually the bread at Panera is really great...I bought a loaf last week and it was just heavenly. Okay...enough about food..I need to get my mind elsewhere. All I have to do is just look at something and I gain 5lbs!!

It all looks so yummy! I have some friends that taught in Germany for several decades and mention how much they miss the food...they sure would love this! Great pictures too.

Yum, Carola, when I visit my home in NJ, my mom always makes a trip to the German butcher and our table is filled with all kinds of meats from above. My favorite has always been fleishsalat. She used to take smoked sausage and stuff on the plane for my brother and me when she visited us. Now, she says it's too expensive to risk Security making her throw it away. :( Great memories and pictures.

Must be so great to have found a bakery and place where food is familiar and comforting. Sure - I can imagine driving for an hour with that kind of promised reward!!!

sweet baby jesus i love bread...almost more than my first born especially with sugar and butter....that monstruizel...im sure i hacked the spelling but it looks uhmuhmuhm!!! im sure it was worth every mile

oh, my! your post made me HUNGRY! everything looks soooooooo GOOD!

I so had to laugh about this one!
We once in Australia stayed an extra night in a little town where there was nothing to do. But the baker at Coles was either German or French, the breadrolls were called petit pain and they were like real German Brötchen.
Sausages in Australia make me gag. We tried it twice and really had to throw them away.
We eventually plan to leave Germany, too and if we manage there´ll be some things I´ll miss! (And so many others I won´t).