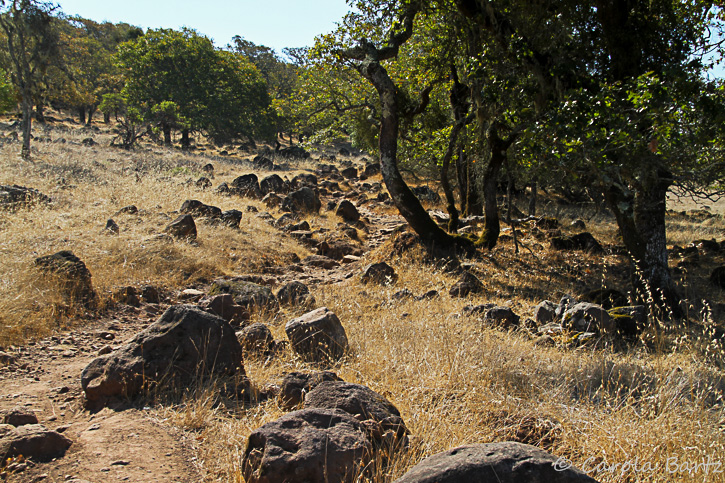 For this week's Good Fences I have "outside the box" fences again. I noticed them while hiking in my favorite state park that is practically at my doorstep.

We have a great network of beautiful trails through the wilderness of the park. These trails are used by hikers, runners, horse riders and mountain bikers. It shouldn't be too difficult to stay on these trails.

At least one would think so.

Unfortunately there are people who feel some kind of weird entitlement that allows them to go in the park wherever they want - actually, it's mostly "bike wherever they want" - and thus creating new trails where they shouldn't be, disrupting the wilderness and disturbing wildlife.

In the following picture you can see one of those illegal trails leading from the center to the right side of the image. 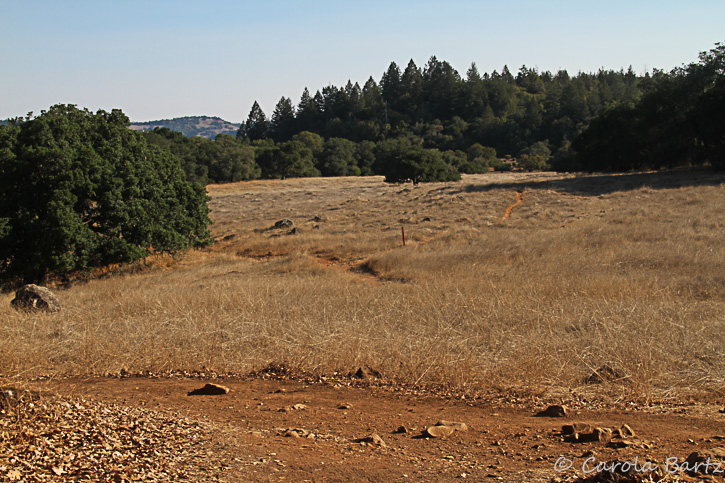 You can see the deep mark it has left in the park. There's a clear sign that you shouldn't use this trail. 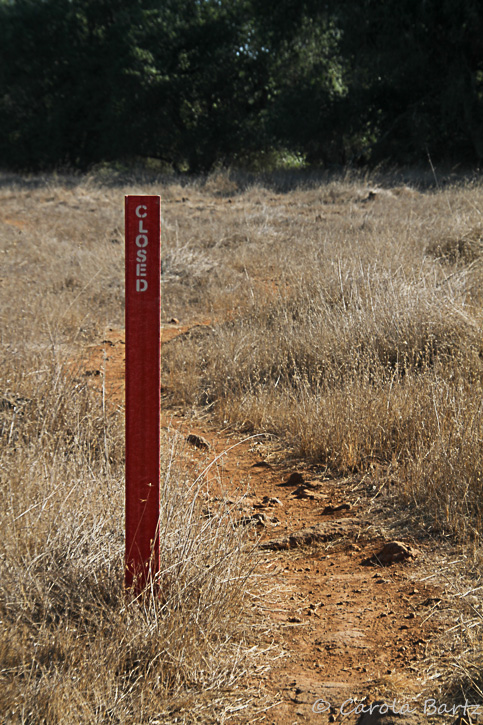 But obviously the park is visited by many illiterate people, so the rangers tried a different method - natural "fences". 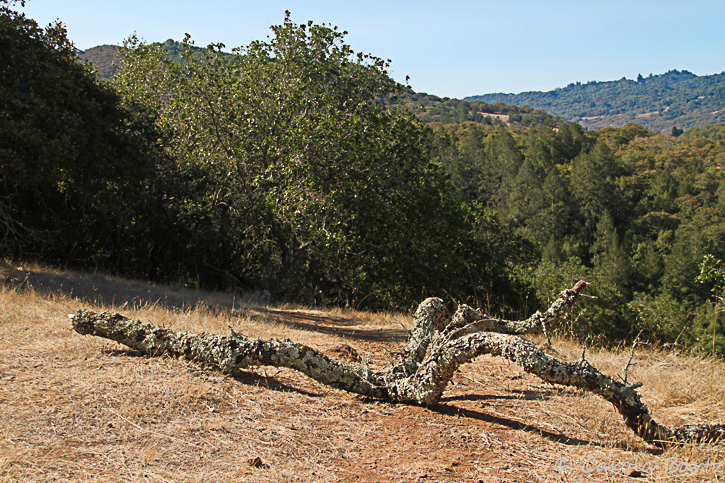 A huge branch blocks this trail, and from the look of it, it seems to work.

Here's another one - the branch was laid out quite some time ago. You almost can't see the trail anymore, the branch has deteriorated - this has been successful, it seems. 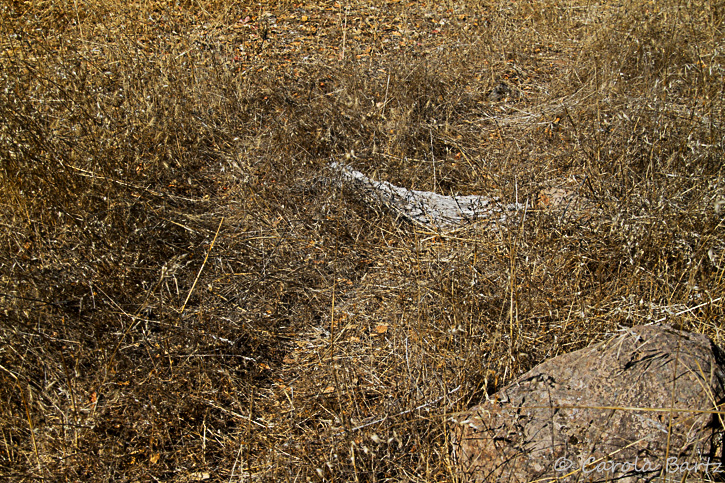 Here mountain bikers have taken a questionable short cut beside the trail, probably because it's less rocky. By the way the branches and big rocks are laid across the trail I got the impression that the rangers were pretty mad when they blocked this part. I honestly cannot blame them. 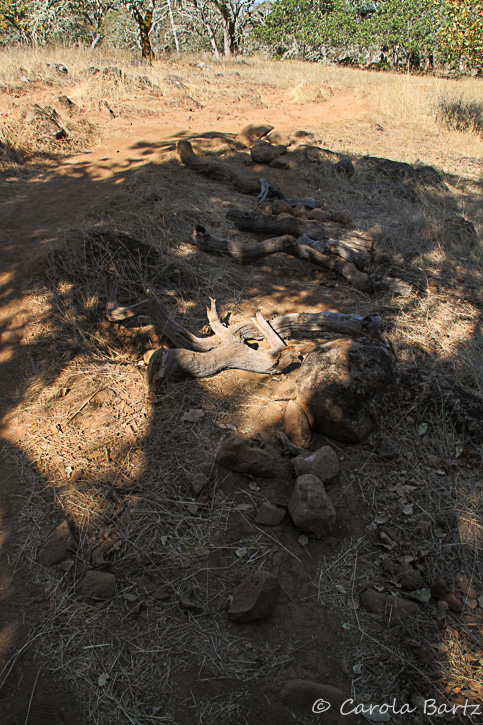 I've been here so often, but only recently did I notice this rock wall. I have no idea what the purpose of it is except that it's probably home to a few rattlesnakes. 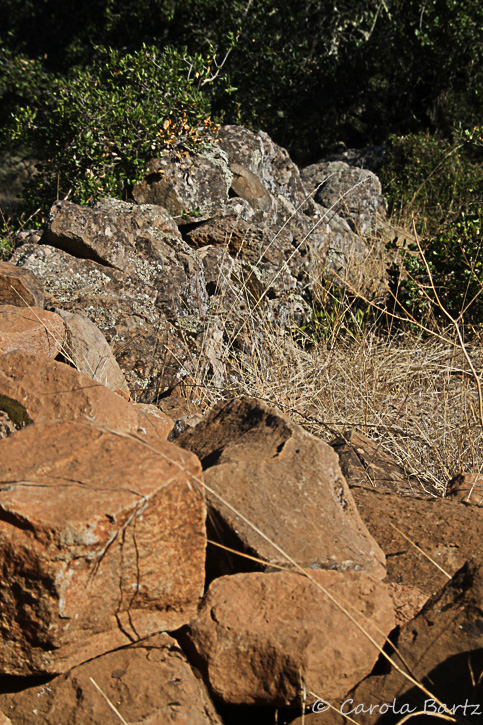 This is such a beautiful place, and it truly makes me mad that some people don't respect the wilderness and create new trails. I don't understand why they aren't able to stay on the trails that are already there. 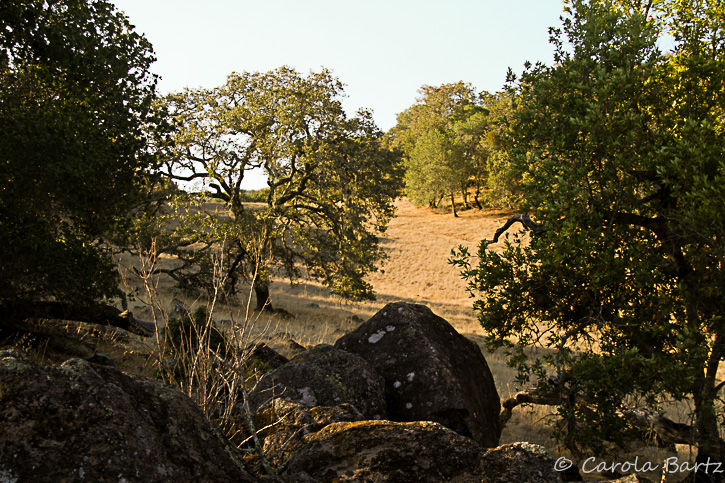 I have to say these are the best fences I have seen ... natural is always the best and I second your disgust with people who think they don't have to follow the rules. It seems to be pandemic these days ... is it the "me" generation or what? We so need to get back to discipline and respect. Great post, Carola ...

Andrea @ From The Sol

Coloring Outside the Lines said...

I think that these people just don't think outside of their own selfish desires. The sad thing is- these few bad apples will eventually ruin the park for people who do care about it.

good for the park rangers for using natural obstacles to keep the bikers where they should be anyway. nice, rugged area!

Some times I think they post signs like that in case some one gets hurt along the way. We have places where folks hike around here where I've seen signs posted that they hike at their own risk, another way insurance companies like to push so they aren't responsible! I like the looks of that area and I'd hike it too from what I can see. I can imagine all the beauty waiting out there.

Thanks for sharing this beautiful park and those excellent "fences." The same thing happens here, sadly, with people tearing up the forests with their ATVs. I love that last photo - such a beautiful landscape!

Selfish, inconsiderate people that also leave trash on the trails. Your area is so pretty.
Nicole/Beadwright

Love those fences.
And share your sadness (and more than a little anger) at the people who believe it IS all about them. And their convenience.
Hiss and spit.

Love the rocks in nature!

What a lovely place to hike!, Carola. There's always people who want to break the rules and do it their own way, even if it means it disturbs the beautiful park. I can imagine how frustrating it is to be a ranger there. Natural fences seem to be the way to go.

I totally agree with you. People can be quite "Stupid" sometimes. I like the parks methods of creating nature fences to discourage them.

People always tend to think regulations are for others - not themselves, I guess. It does detract from the beauty when "illegal" trails must be blocked with dead wood. Those algae-coverd rocks are so lovely.

What an interesting topic, Carola. I think there are many reasons why these bikers don't follow the rules. They don't want their ride to be disrupted by meeting hikers and the other riders, they want to feel like explorers, they simply don't want to follow any rules... I like the idea of the natural "fences" blocking and hiding the undesired trail.

Yes, it is quite beautiful. I guess our generation was the last one that was taught respect and self control. How sad that some kids these days don't know how to follow rules.

Easier to save what we have got than build new places. Cyclist, walker, jogger or whatever, we have one place to call home - namely, Planet Earth. Good to be conscientious of it.
Lovely snaps of the great area!
Have a Beautiful Day!
Peace :)