Music in the Streets

Street music is something I love - it gives a town or city a certain flair if there are musicians out in the streets entertaining others with their musical talent.

Street music can be seen - pardon me, heard! - in many places in Europe. It's something that just belongs to city streets and plazas, and it's not only for warm summer days when the living is easy. More often than not you find street musicians at Christmas markets all over Germany when the temperatures are barely hovering over the freezing point.

But I digress. Today I want to show you some of the street musicians we came across during our trip in Europe, mainly in Great Britain and Paris. There weren't that many in Hameln, Germany while we were there - probably because it was a regular week day and not a Saturday when there are more crowds. There also weren't that many in Amsterdam which surprised me a little bit.

However, this guy in Edinburgh played his beautiful bagpipe melodies even though it was raining and not many people stopped to listen to him. He was fully dressed in tartan and quite the sight. 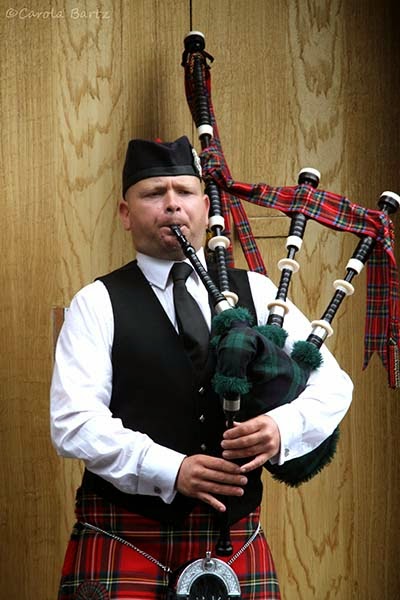 In London, we met another bagpipe player in Trafalgar Square who tried to make his music heard in all the traffic. Not an easy job! He didn't seem to be very concerned though and kept his British calm. 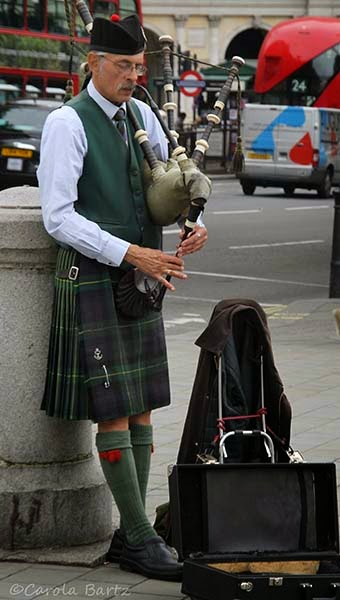 Walking along the South Bank was quite the sound experience. There were so many street musicians, and sometimes their music mixed when you had just left one of them and approached the next one. It could be a rather interesting mix sometimes with all the different kinds of music. 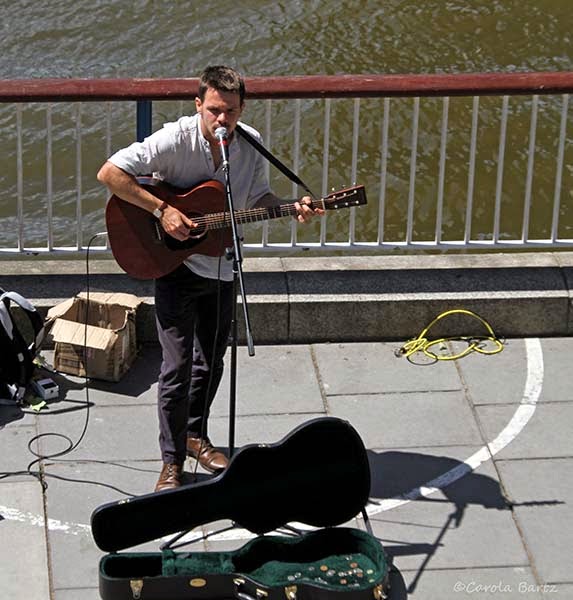 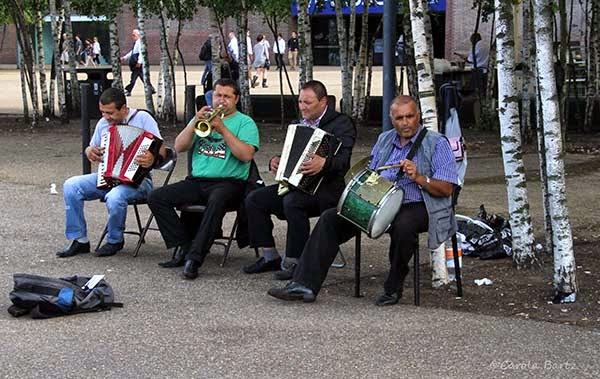 These guys were also flirting with Kaefer while playing their joyful tunes. It actually was fun! And he was my favorite.

The most music though you can hear in the long passageways of the tube, the underground transportation in London. The acoustics down there are fabulous and you already hear the music when you either enter the station from the street or when you disembark ("alight" as the English call it) a train. It's something I always associate with London.

Paris, on the other hand, didn't have much music in the metro, but there were tons of street musicians everywhere. A saxophonist at the Champs de Mars near the Tour Eiffel... 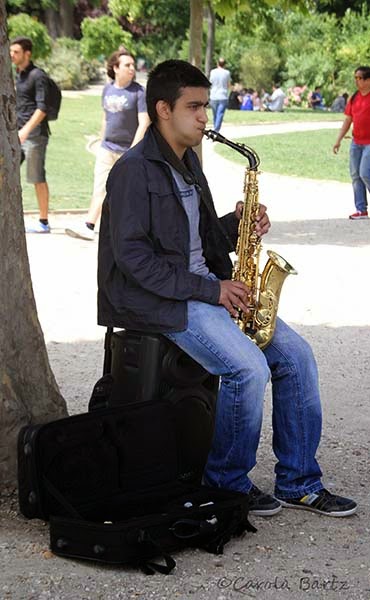 ...and a guitarist at the Centre Pompidou. 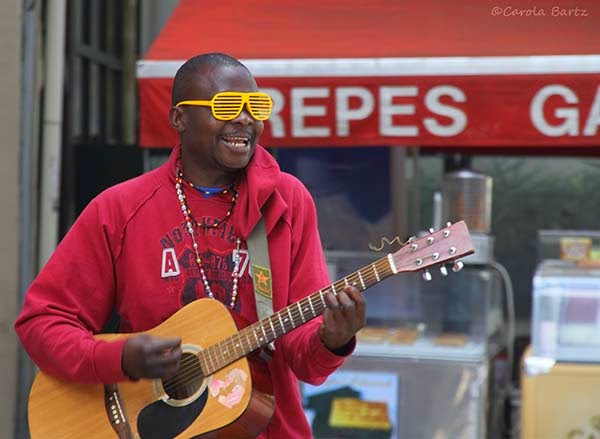 Not far from him there was this a cappella choir whose singing we enjoyed a lot. 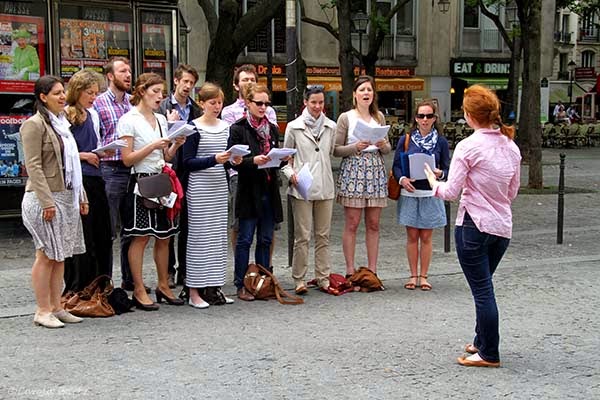 And so did this little girl while sitting on her dad's shoulder and holding the flowers (for her mom?). Isn't she adorable? 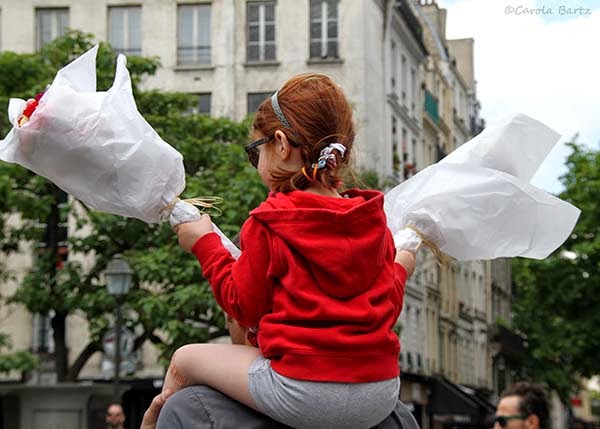 A cappella seems to be quite popular in Paris, because the same day we saw another choir who sang in a courtyard in the oldest part of Paris, the Marais. 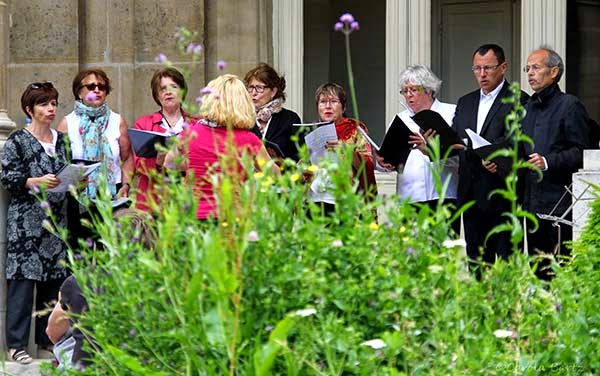 Of course most of the street musicians we met in the Quartier Latin, where the university is found and life is loud and vibrant. The music was a broad mix of everything you could think of - I enjoyed walking along the streets and alleys and discovering new bands all the time. 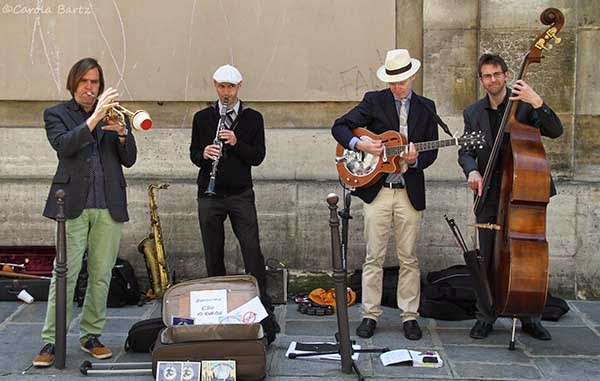 Now let's get dancing, just like this old lady in this photo!

Oh wow! Wonderful photos, Carola, and what a variety! That old lady in the last one is wonderful! Glad you enjoyed the bagpipes. Word has it that when pipers marched playing into battle their enemies would flee for their lives, so alarming was the sound!!!

What fun. Street music almost always seems like happy music to me. And dancing is always a joy.
That said, bagpipe music brings tears to my eyes. Every time. I don't even know why, but it does.

I love street music and the freedom of expression is conveys. I also love that lady in the last shot :)

We heard a wonderful Bulgarian orchestra once in the Paris metro. All those people! And an amazing wonderful sound I will never forget.

Music seems to have followed you everywhere you went Carola. I love how you captured this musical atmosphere :-)

I love the street musicians. We have a group who play along the Rhine every Sunday, sometimes together, sometimes each sits somewhere else and plays his melancholy music for the birds and river and passers by, I love it! Valerie