The capital of bicycles 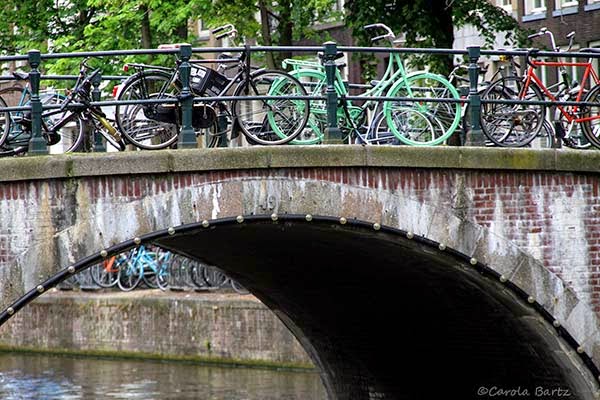 Amsterdam is a busy city, bursting with life, and the main transportation vehicle is - the bicycle. They are everywhere.
E-V-E-R-Y-W-H-E-R-E. 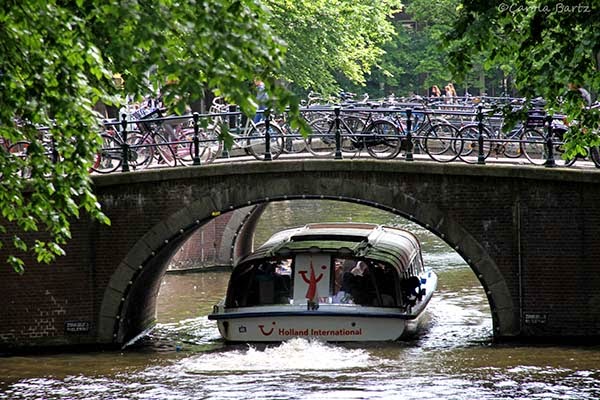 Near the central railway station we even saw a huge bicycle garage, three levels, and it was full. Where I used to live before we moved to California there were many bikes, and I biked a lot, but nothing compares to this. It was simply amazing. 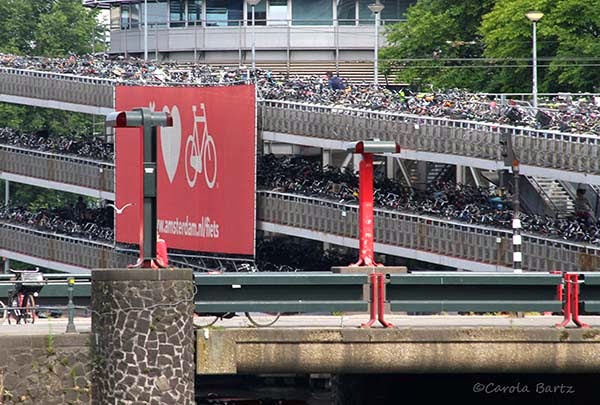 The bicycles in Amsterdam are not modern, stylish bikes. Most of them are older, what we used to call in Germany the "Holland Rad" (Holland bike). Some of them are painted. All of them are locked safely when left on the street. 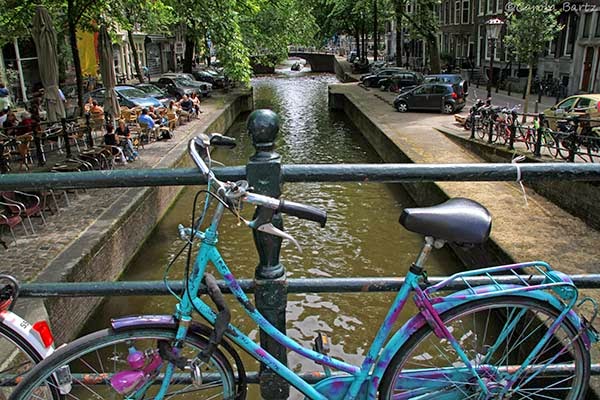 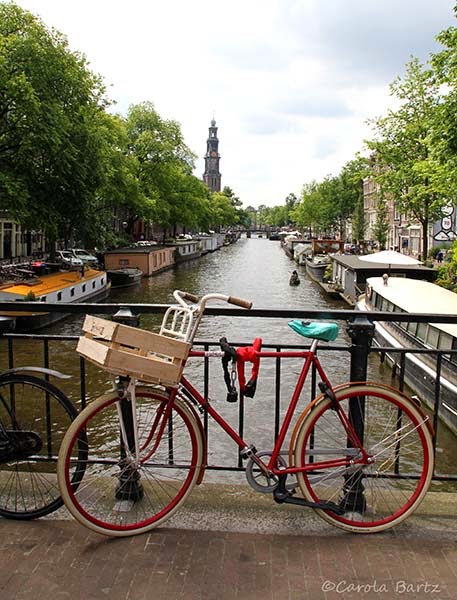 We even saw a bicycle made from wood! 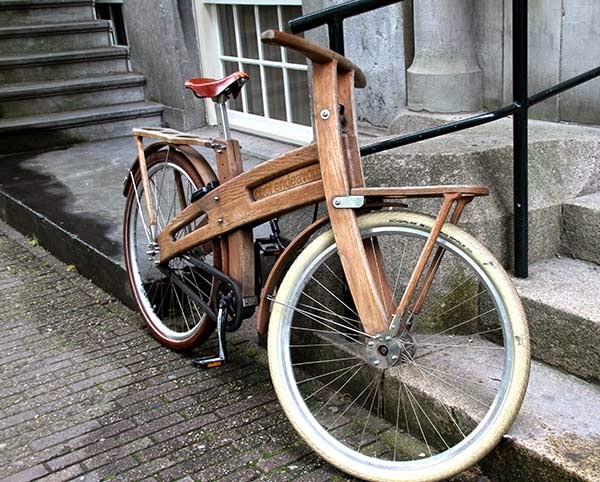 Many bicycles carried baskets or boxes, and some of them were lovingly decorated. 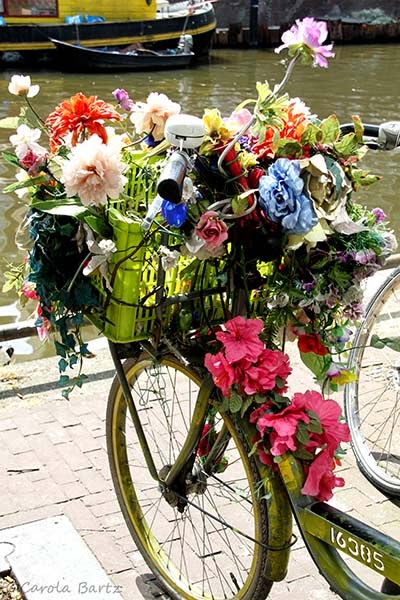 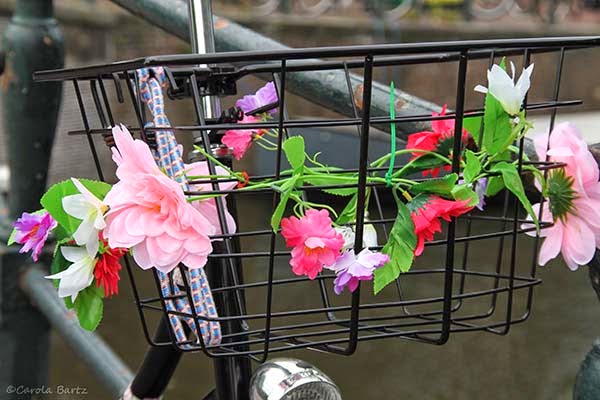 This one was a true Netherlands fan or a good patriot - someone who loves her or his country. 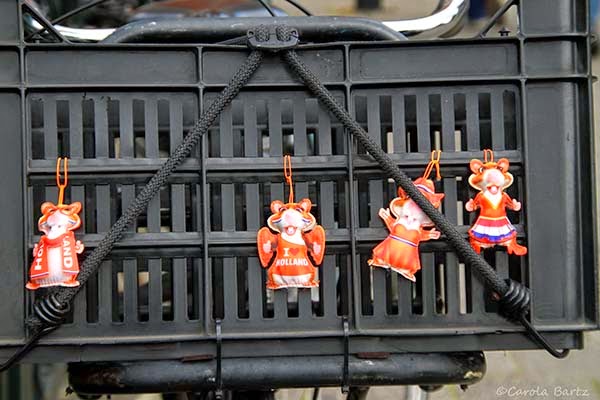 Wherever you go, there are bicycles parked on the side. I think we only saw one bridge without any bicycles. Do you have an idea how many bridges there are in Amsterdam? M-A-N-Y. 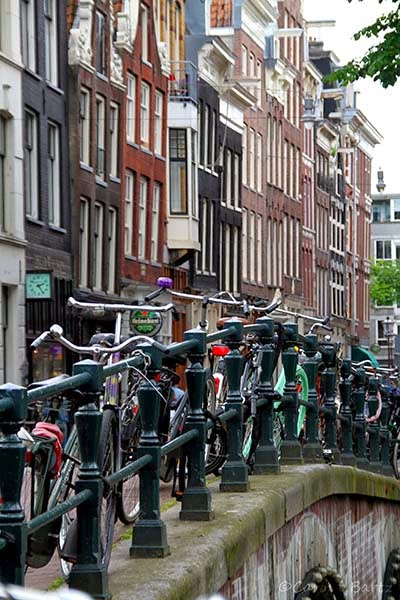 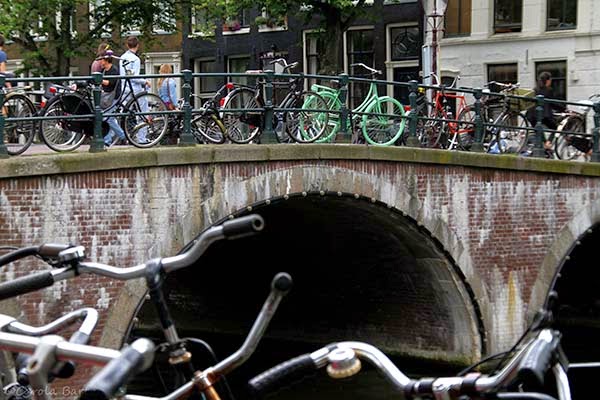 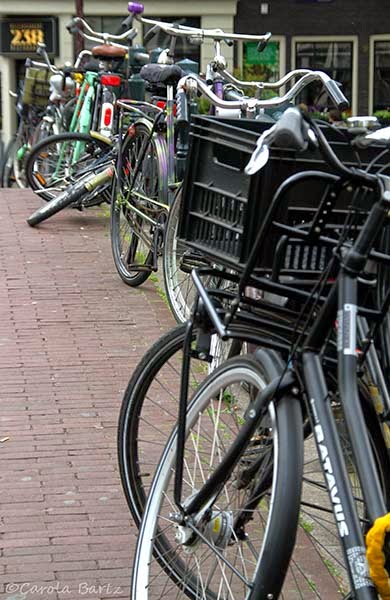 You can't even take a picture of flowers without some part of a bicycle in the image. 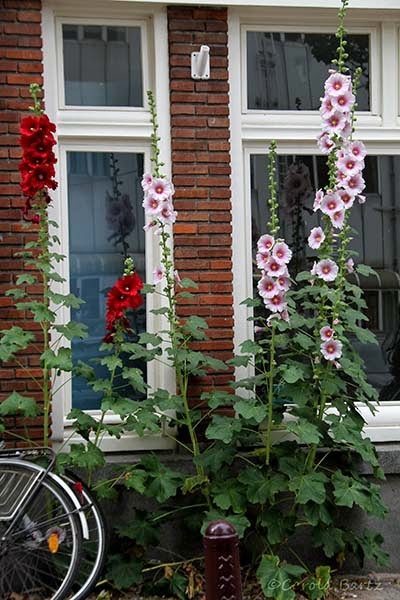 We also discovered some bicycle art - it seems to be only natural that someone would start to make art using old bicycle parts. 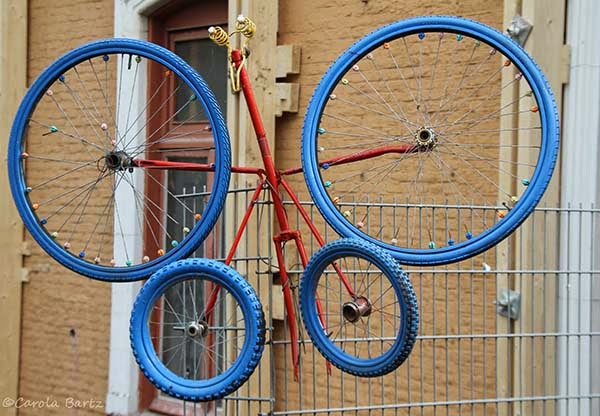 Almost no one wears a helmet, not even the children. I saw parents with little children in a bike seat - no helmet. Wearing helmets while riding a bike is not popular at all. There are bike lanes everywhere in this country which makes riding a bike a pure joy and very comfortable. Everybody seems to bike to work - in a full suit; wearing high heels. I thought it was wonderful. I wish it was that easy here in the US, but riding a bike is scary here. It is so wide spread and popular not only in Amsterdam, but generally in Europe. It's a lively part of a different way of life. I love it. 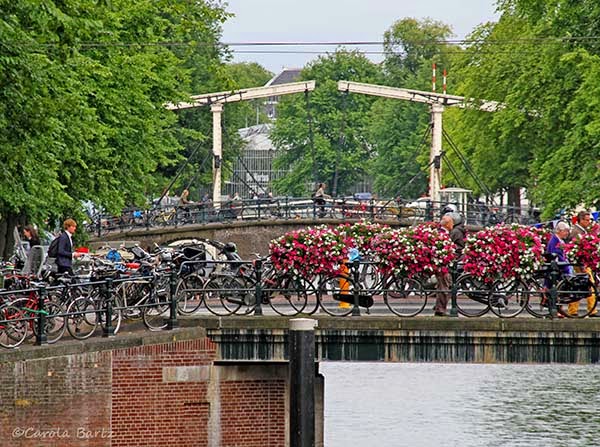 Don't think I've ever seen quite so many cycles all at once Carola.. such a good way to travel, no traffic fumes etc. My problem would be finding my bike again.. as it is I sometimes can't find my car in the carpark :)

What a wonderful city!! I'm putting it on my list of places to visit. I love all these bike shots, especially the bikes decorated with flowers. Such a great mode of transportation -- healthy for people and the planet. Thanks for taking us along!

Wonderful photos! I was reading an article about Amsterdam and bicycles because of automobile parking spaces being so expensive.
The first time I went to China, I was shocked by the amount of people on bicycles. They didn't have then, the problem they have with pollution now a days. They should go back to riding bikes.
(Congratulations on the world cup. Very well deserved).

I wish it could be more like this in America. We might be a lot healthier! But it isn't practical when people commute 30+ miles to work in all kinds of weather!

Incredible, the number of bicycles in Amsterdam! I wish our city was designed for this mode of transportation. So much healthier for people and good for the environment.

What fun.
And what a lovely way for a city to be known.
Love that wooden bike too - beautiful and practical.

There is a fine selection of bicycles there :-)

Wonderful, wonderful photos, Carola! It looks like you had a wonderful holiday! The way different cultures use and treat bicycles fascinates me, like those used to carry bananas in Rwanda.

Oh how wonderful Carola. I love this post and only wish it was like that here in the USA. It's beautiful and so exciting. Great post! You should get a trophy for this post!!

We love to ride bikes and it would be wonderful to live somewhere that you could ride safely! Love your photos as always! Hugs, Diane

I know. I was delighted to see the use of bicycles in Amsterdam too. And I couldn't get over all the bikes at the station - amazing. Love your collection of photos.

Such a great post. It's amazing how many bicycles there are. So does this mean there are hardly any cars...just curious.

This is so cool! I love seeing all the bikes! I love that people bike so much and that it is accepted like this! Very interesting they don't wear helmets. Maybe because everyone bikes??
Excellent post! Love the pictures!

And I thought we had a lot of bikes. Wow!

These bicycles are really quite amazing and can't imagine seeing this number of them!