Rock Cairns by the Side of the Road 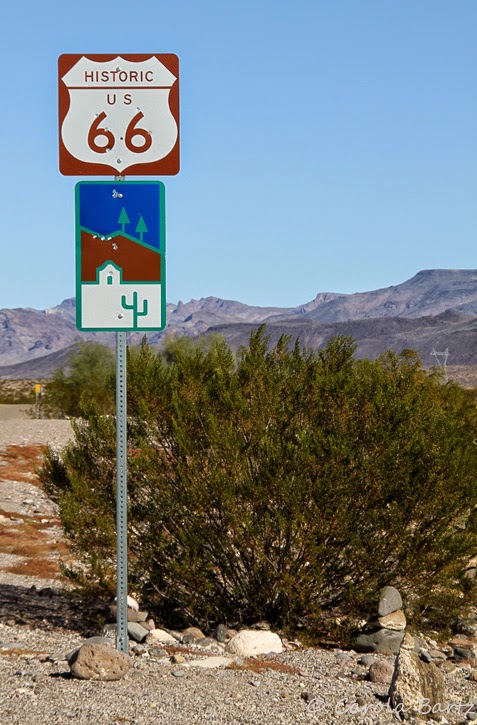 When I got out of the car to take a photo of the Route 66 sign I noticed there were several rock cairns by the side of the road. It was quite a surprise for me because up to then I've only known rock cairns as a help to find your way on hiking trails through rough and wild country. There wasn't a hiking trail here and I wondered why they were here. Obviously someone or several people had set them up, but for what reason? Were they some kind of alternative trail markers? Or are they used as some kind of communication? 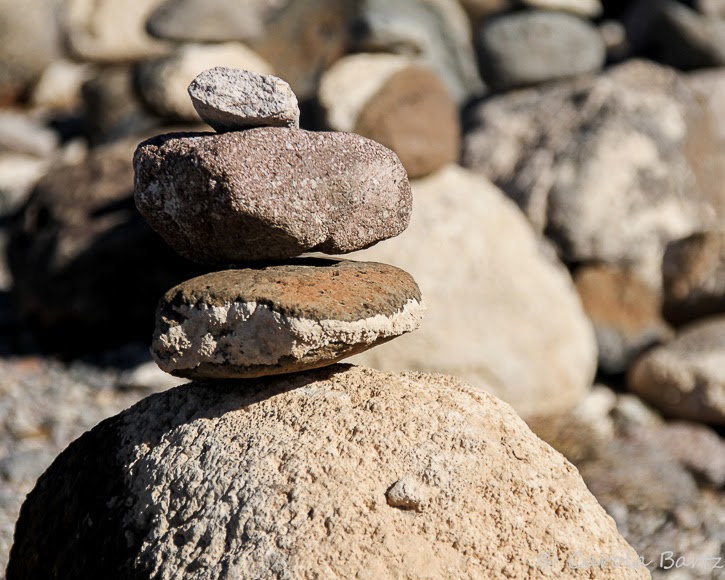 When I googled "rock cairns" I found that there is even a poll whether one should knock over rock cairns or not. The short article also held some interesting information about legal and illegal rock cairns. There was a reference to the book "Cairns: Messengers in Stone" by David Williams. Here I learned that they can mark a grave, serve as an altar or shrine, reveal property boundaries or sacred hunting grounds, and even predict astronomical activity. 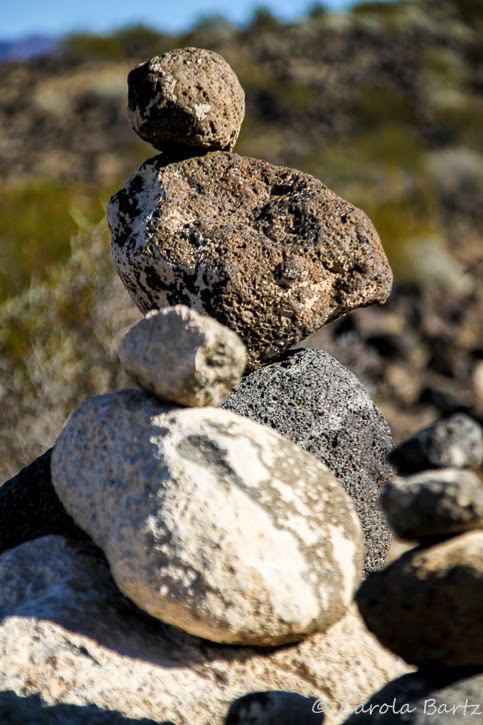 They seem to come from the Himalaya and can be found in different terrain (even in the moors of Scotland). The book sounds quite interesting to me and I've put it on my Amazon wish list. This seems to be too good to pass up. 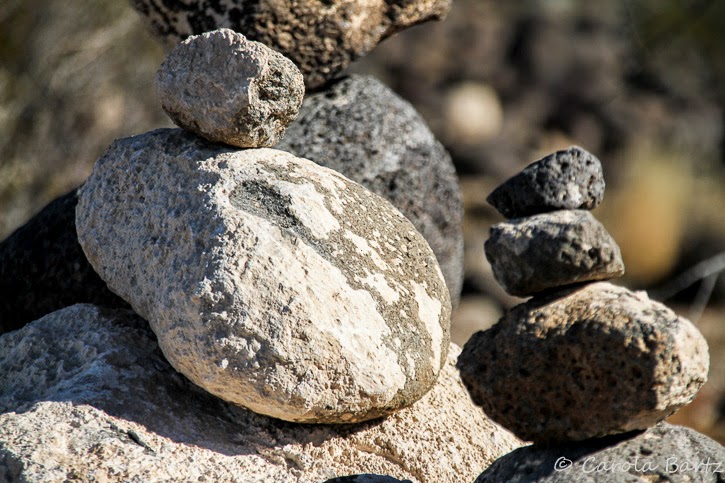 The Inuit of the Arctic are said to have more than two dozen terms to describe cairns and their uses. That reminds me of the inukshuk in Canada - one even was the logo of the 2010 Winter Olympic Games in Vancouver, BC. When we went up the Sunshine Coast in British Columbia two years ago, we found a small inukshuk on a driftwood log at the beach. 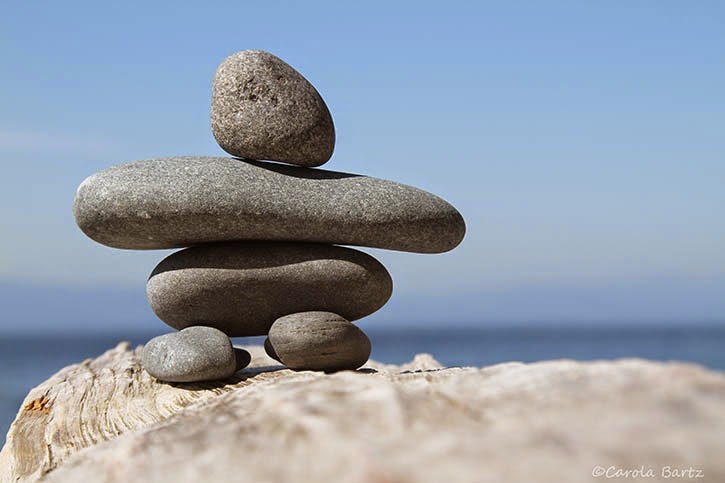 The inukshuk is available in my Etsy store
as a photo greeting card.
Check it out if you like! 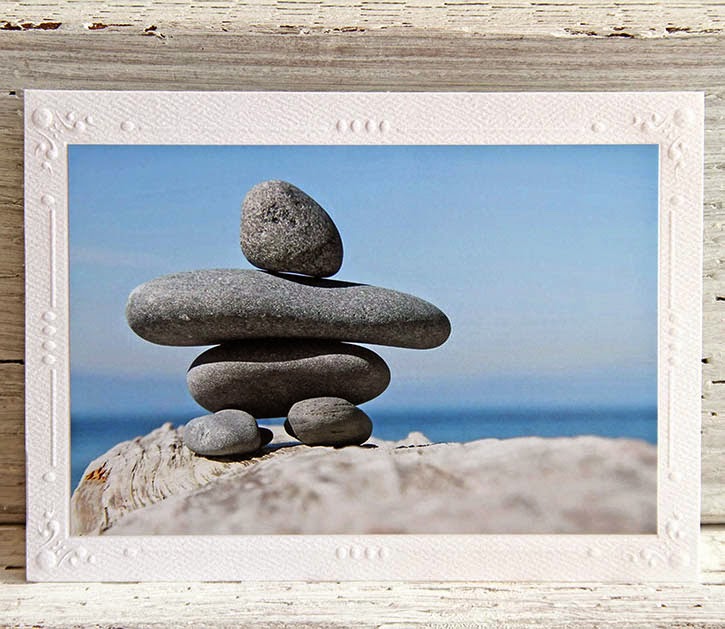 What an interesting post Carola. Love all your photos. I learned something about rocks today. Thank you.

I've seen many on beaches around the coast of England and people just create them for the sake of it, maybe as an expression of art. Love the one that looks like a little person.
There was a programme on TV, about a year ago, featuring an artist who sets them up with quite big stones with the top stones balancing independently. It showed her making them and it really fascinated me.
Jo x

I never knew cairns could be so complicated! A very neat find that gave you something to ponder.

It's fun to think about who might have organized these rocks.

How sweet it is along Route 66! We have thee delightful little rock stories along our North Shore drive around Duluth, Minnesota. They are a joy to behold.

Very interesting post. I had no idea there were legal and illegal cairns.

I found your post very interesting too Carola. Those rocks are quite beautiful and the way they are positioned they look good, whatever their meaning :D)

What fascinating information. I think many times they are used as a memorial for someone that passed away from an accident nearby...rather like leaving flowers but far more lasting.

Your photos, as usual are brilliant.

Interesting post! Like you, I was familiar with them through hiking. Although, I did know that they appear in Scotland. You have me intrigued and I will be reading about them further.

I have a tremendous fascination with rock cairns, Carola, and would love such a book, I know. And the second you mentioned the inukshuk from the 2010 Winter Olympics in Vancouver, I was reminded of our wonderful trip there (past life) in 2008, seeing all the preparations using the inukshuk logo. Fabulous photos for this post! Very soulful.