Texture Tuesday on a Monday

It's been a while since I joined Kim Klassen at Texture Tuesday. I'm having a bit of a hard time keeping up with blogging at the moment - I really hope that will change very soon again!

Here's my contribution - another image from the National Heirloom Expo, "The Blue Jar". 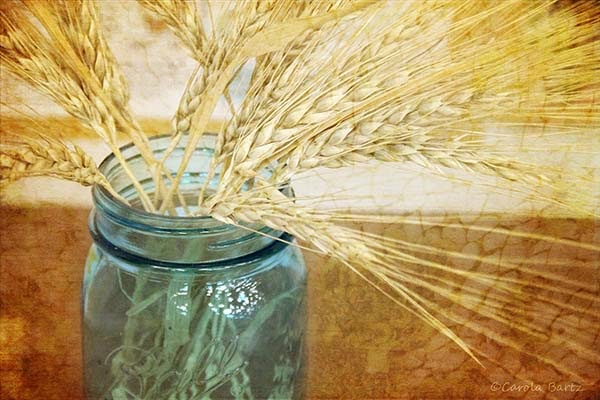 The original photo really wasn't anything to rave about - too dark. But I liked the simplicity of it and that's why I chose it.

Here's the recipe:
- after a levels adjustment, I blended the image with Kim's texture "kk_appreciate" in linear burn at 50%; brushed away the texture from the blue jar
- copied it and blended in soft light at 100%; brushed away the texture form the jar
- added Kim's texture "chamomile", soft light at 75%
- after a hue/saturation adjustment I added a photo of mine and blended it in soft light at 60%, again brushing it away from the jar. The photo is a close up of the seeds in the head of a sunflower and you can see them mainly in the right half of the image.

What is truly beautiful. It's a wonderful choice. But I must admit that you have photo editing abilities that I can only dream of. But, seeing your end result, it might be time that I try to learn!

What a beauty this photo is now!!!

Oh wow. I have so much to learn - and thank you for showing me more to intrigue and tempt me.

The photo is beautiful.
Have a nice day! RW & SK

Such a beautiful texture - and creative - using sunflower seeds, Carole! Thank you for the editing tutorial - I am often so curious about how these artful photos are being created.

Love this image. Beautiful in it's simplicity and I love the contrast of the blue jar and the corn. Great texture work and photo blending.

This is a beautiful photo and texture!

I love the composition, and texture work. I love wheat and blue jars too...

I love anything in a blue jar...this is outstanding!!

I always love to see what you do with textures ~ this is lovely.

This is a beautiful texture work !!

I love this simplicity of this too...and what's not to love about a blue mason jar! :)

I love the simplicity of this shot - wonderful composition and tones!

so perfect for fall! Love the mason jar with the wheat...and that sunflower photo gives such a wonderful earthy texture to the entire processing...
Blessings!

This is amazing! Truly beautiful!

Beautiful piece! I love the simplicity. The effects of the texture and your sunflower photo are perfect!