It's here. Right at my toes.

It's half eaten. It oozes out sweet juices. It's sticky. It still smells really good. And it hums. Wildly.

It's the first of all the future presents over the next several weeks.

It's a pear. The tree that it once belonged to has thoughtlessly dropped it. It fell on the ground and splash! lost its shape.

Before that the tree shook off some of its fruit-loaded branches, flattening my penstemons and giving the zucchini plant the hiccups.

But I'm talking about the first fallen pear here. Because it's not just a regular pear. No, it's dope for the bees. They're crazy about that stuff. All the bees from the neighborhood come together on this one single pear in a crazy feeding frenzy, munching away happily. Obviously so much better than honey... (?) And yes, they're humming. Loud. 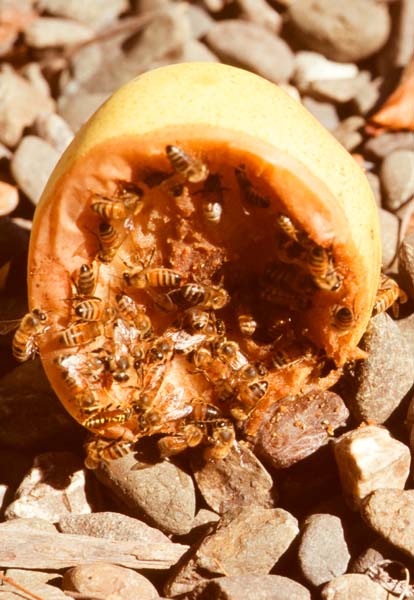 And I know that this is only the beginning. There will be more pears falling down, more crazy bees, more humming. And eventually, only little sad remains of what once was a perfectly fine pear will be left and finally end up in the yard bin.

But the bees will be happy.
Posted by Carola Bartz at 3:25 PM

Thanks for stopping by my lil cubby hole Carola. I'm following you know. I love your photography. I love taking pics as well and yours are stunning!

Maybe the title of the post should be "Bee Happy." :) I love the image you created with your words to go with the photograph.

Love the way you write---and taking in all nature gives us really lets us breathe for a moment, doesn't it?

Yes, the bees will be happy... Nice blog and the pics are amazing!

great photo of the bees enjoying the sweet juices of the pear. Your writing is delightful to read, and that picture in your blog header always makes me gasp...no matter how many times I visit this site!