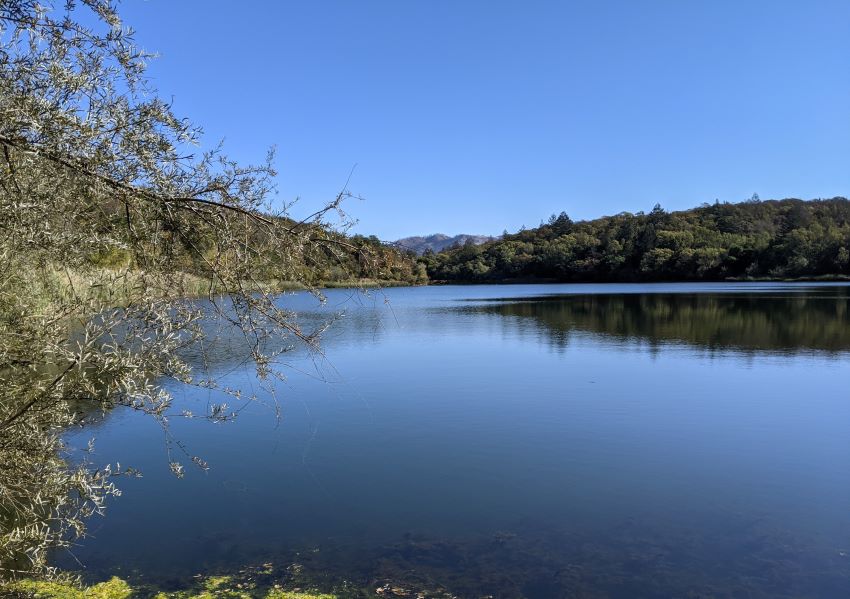 The last couple days have been gorgeous fall days, sunny and warm but not hot. Perfect for having a walk along the North shore of a small lake in the vicinity of "my" lake. 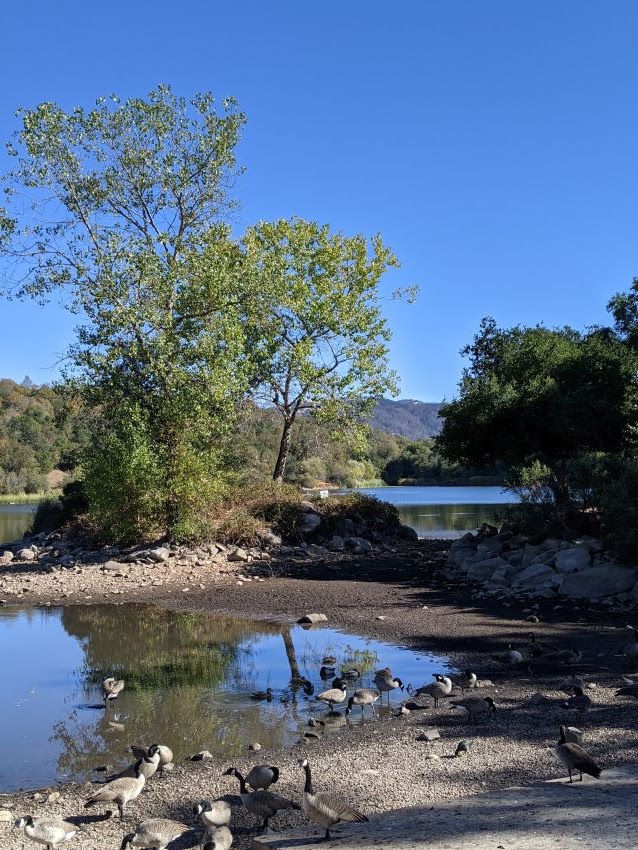 In order to get to the North shore trail I crossed the dam. I saw a dad teaching his little son how to fish while others looked quite comfortable doing their own fishing. I wonder whether this guy caught anything or this was just his way of meditation. 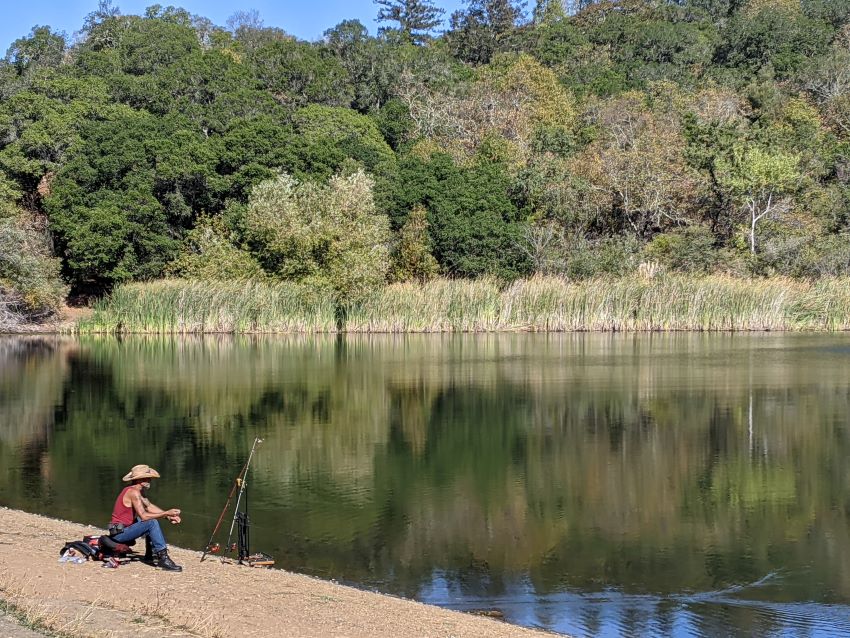 The trail is one of those that I could hike along for hours. 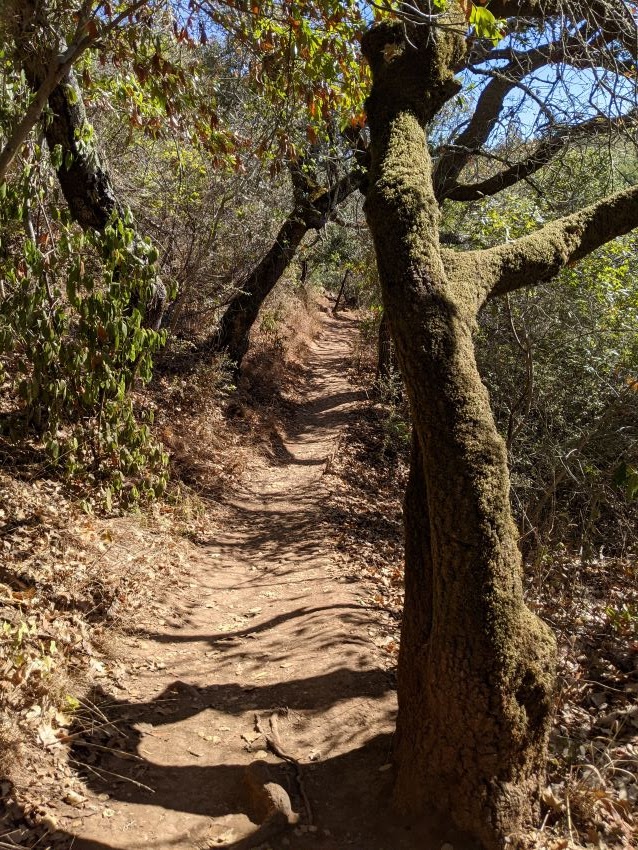 It offered lots of shade, but also many views of the lake. The birds were busy in the bushes. I heard Northern Flickers up in the trees, the Canada geese on the water (they are so noisy), but the loudest were the Red-winged Blackbirds that were merrily chatting along. It was quite the concert! 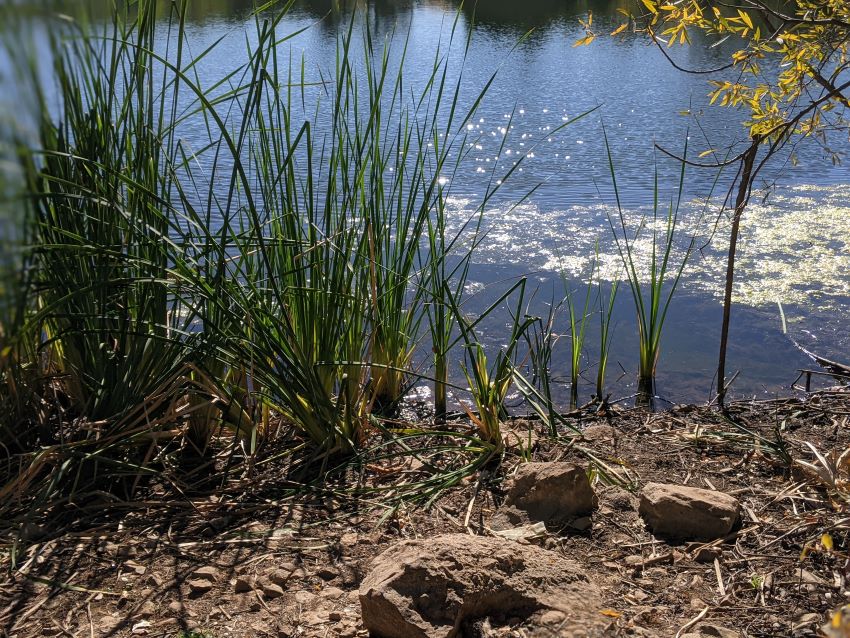 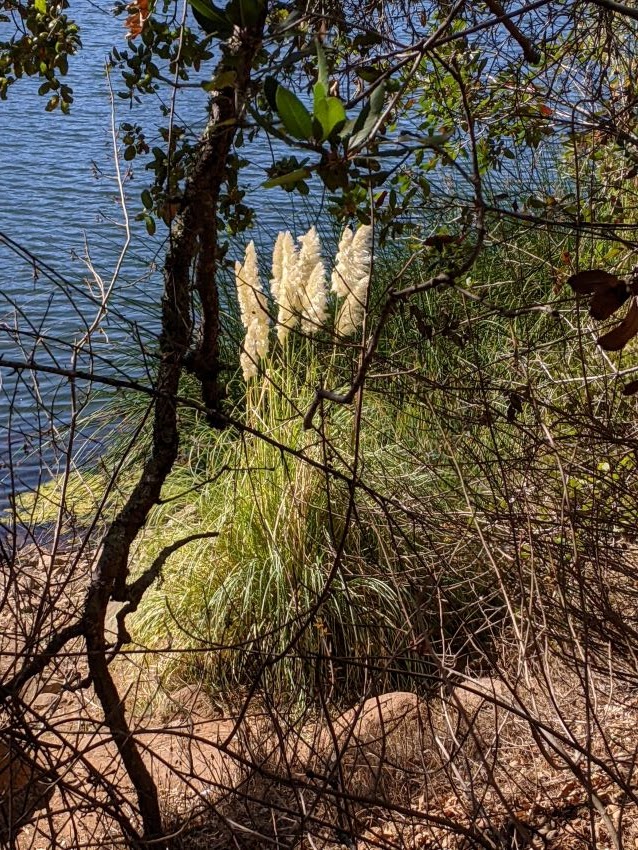 I was quite concerned to see so much Pampas grass (Cortaderia selloana) like in the picture above. It is native to South America, but it has become invasive throughout North America. Unfortunately it can displace native plants and destroy their habitats. We have high amounts of Pampas grass along the slopes at the coast. It's worrying that it has "settled" here as well and I wish the park service would act and remove it before it takes over more of the area. It does look pretty though.
Some parts of the trail were quite rough and rocky. 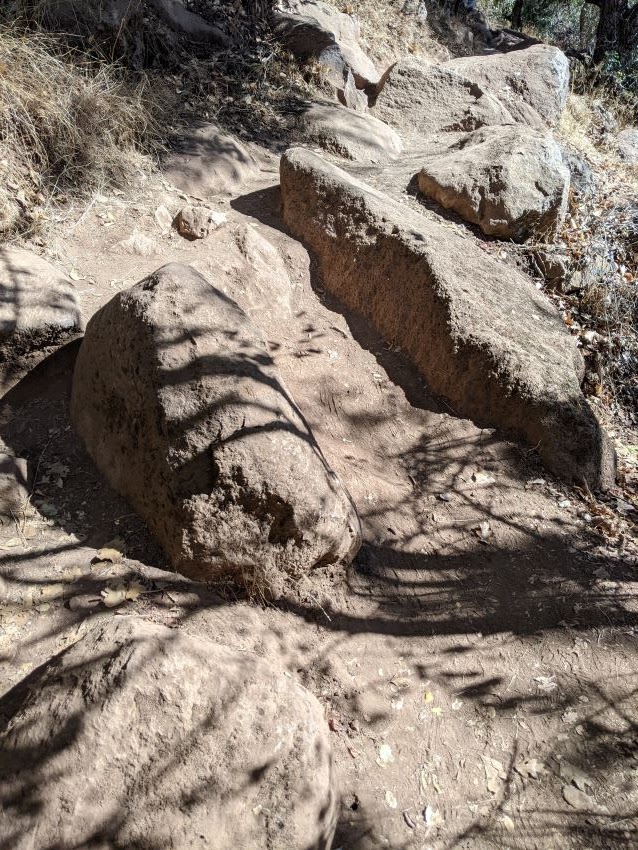 Of course I was pleased to see crooked trees. The trunk of the Buckeye, a California native, was covered with carved-in letters, but it was also fascinating to see how the tree heals itself. 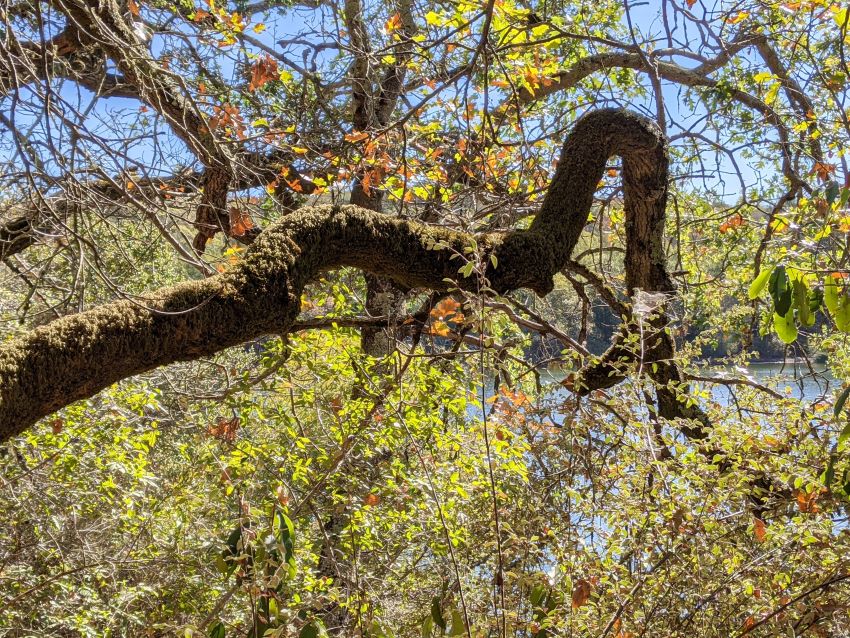 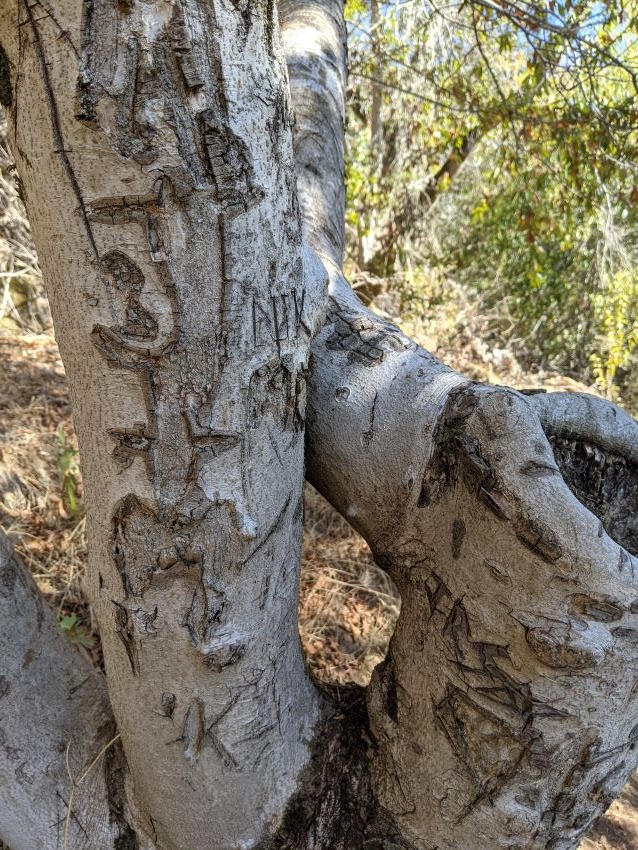 Towards the end of the lake there were more and more cattails (Typha). I do like these plants, but they can also be problematic because, although being a native plant they do have the ability to crowd out other native species. It's a rather aggressive spreader. 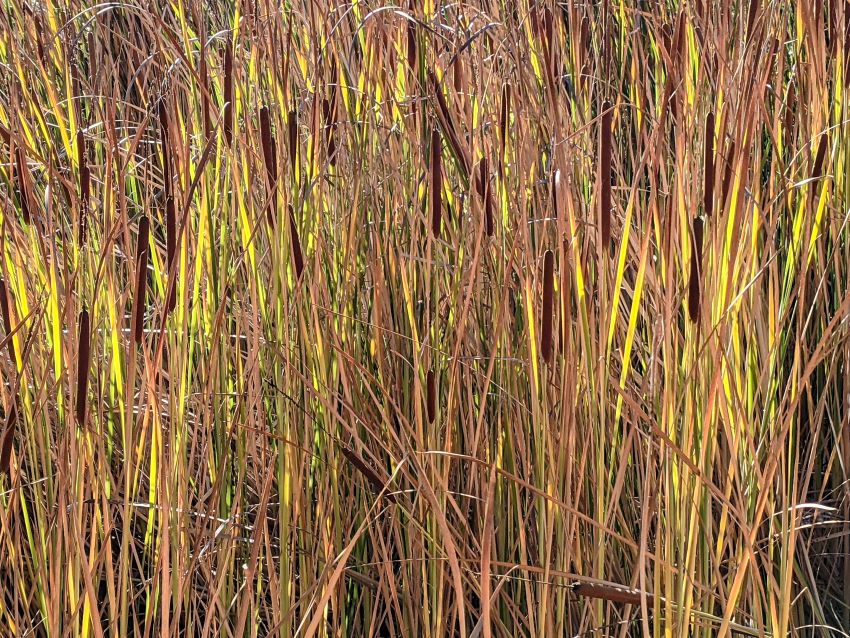 I was super excited to see a Great Blue Heron behind the cattails and this was the only time I regretted not to have taken my big camera with me (sorry for the bad photo). 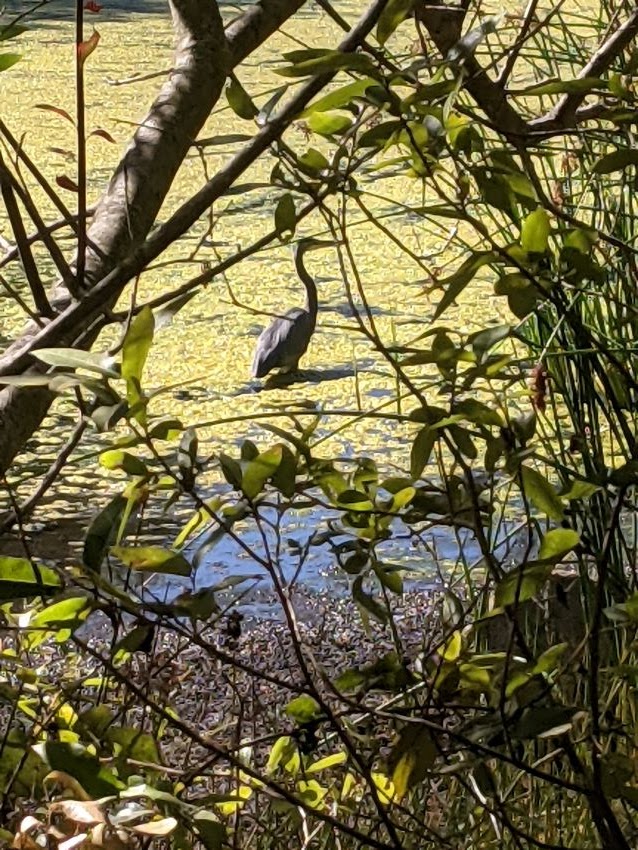 When I reached the end of the lake I decided not to do the loop back but go back the same way. This part is less crowded and I eventually found a bench where I could sit, listen to the birds and write in my journal. 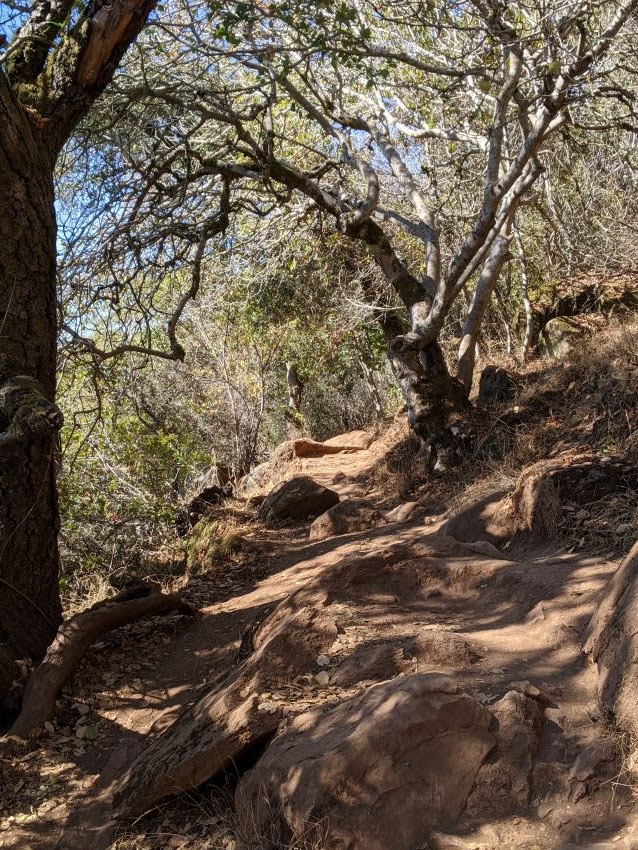 Thank you for this beautiful wander in one of my favourite seasons.
I hear you on the invasive plants with triffid plans for world domination though.

A beautiful walk. So glad I could join you.

Wow. This looks like a gorgeous walk. And your photos are amazing Carola. I hope your beautiful weather continues. Happy weekend. Hugs-Erika

You had a wonderful walk, Carola, I would like to walk along that trail with you, so beautiful. At the last place I lived I had a tiny garden und planted a pot of pampas grass, and sooner or later it took over everything! Have a great weekend, hugs, Valerie

Thanks for taking us along on your walk, Carola. The CA scenery is much different than walks taken here in NH, where it's all about fall foliage in New England now.

I like the picture with the invasive plant ("agressive spreader" as you call it). It looks like a sort of painting.
The blue heron always offers a delightful view.

Carola, your lake photos are very nice, and it sounds like you had a peaceful walk along the trail. I actually went to a nearby lake recently, which I'll show in my post tomorrow. Those crooked trees are something else. The Pampas grass is pretty, isn't it? I love that photo of the man fishing, that is so cool, and really should be in a magazine. It's very simple, but shows so much goodness. Your photos take me to a different place, Carola. Thanks for taking us along your Autumn walk.

What beautiful pictures of a lovely place. The photo of the fisherman reminded me of the times I'd see my husband sitting in the front yard, fishing pole in hand, line in the water. He never caught anything. I always suspected he didn't bait the hook! Just communed in his way with the water.

What a beautiful place to walk. The blue sky and water are lovely. I love hearing the Red-wing Blackbirds calling to each other. So musical.

What a beautiful walk, your photographs are fabulous.

This is beautiful territory, Carola. I love the crooked trees -- and it looks like one of Harry's folks is near you!