A Surgery And A Decision

Last week I had surgery - one of the reasons why I haven't been here for quite a while. It was nothing life-threatening - one of the glands of my parathyroid was playing havoc with the calcium in my blood which is not a good thing and, if untreated, can cause bone density loss and kidney stones. Since I didn't want neither of these I decided to get the responsible gland removed which was finally done last week. I was there as an outpatient and back home in the evening. This time the general anesthesia didn't bother me very much. Usually I tend to feel dizzy and even almost pass out in the first few days after general anesthesia, but this time I felt fine. However, I didn't do very well with the pain medication and I was happy when I was able to stop it. Since then, I've been on the mend, and every day seems to be better than the day before.

There also has been a big decision in our house. 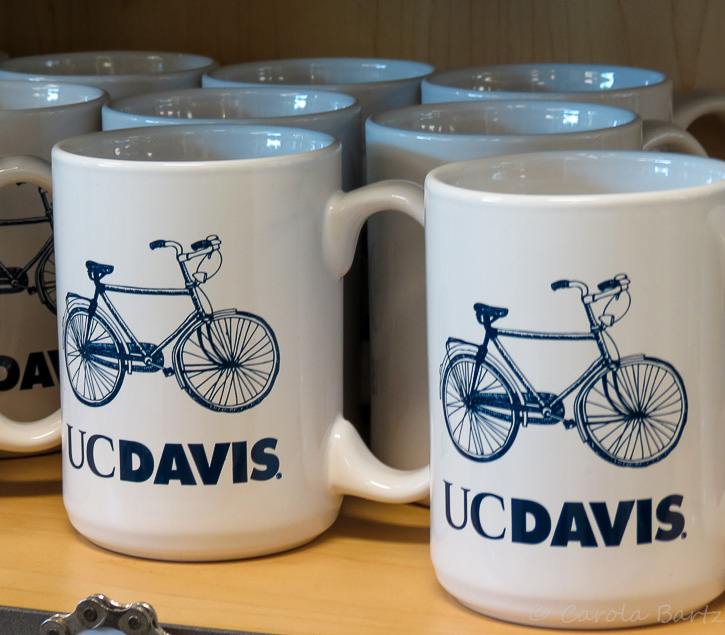 After visiting UC Berkeley and Cal Poly the week before my surgery, we ended the entire "which college should I go to" journey with another short visit to UC Davis. Then the girl made her decision - she will be going to UC Davis. Her major is Sustainable Environmental Design, and I can't imagine a better place for that than Davis.

We visited the campus on a rather grey day, but even then I got the impression of a happy, cheerful and lively environment. Look at the colors of the residence halls! 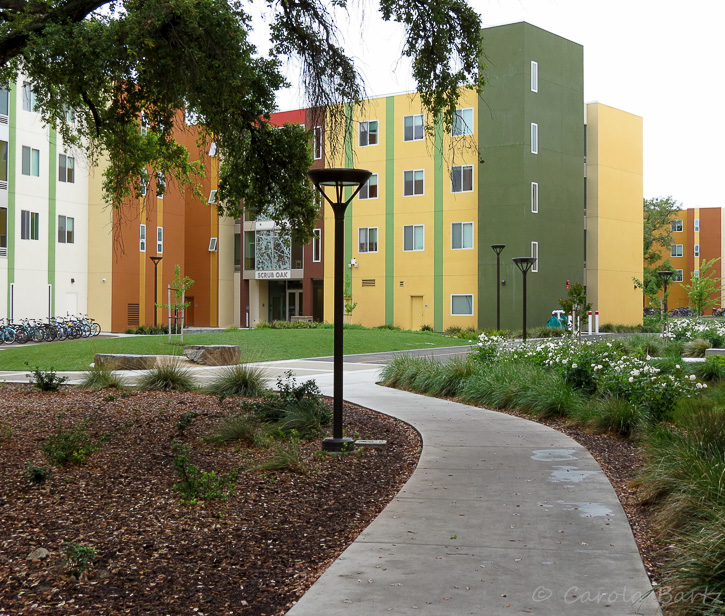 As a student in the university's Honors Program Kaefer will be living in one of these for her freshman year. They are right on campus, but somehow also in the countryside - this is the view from some of the rooms: 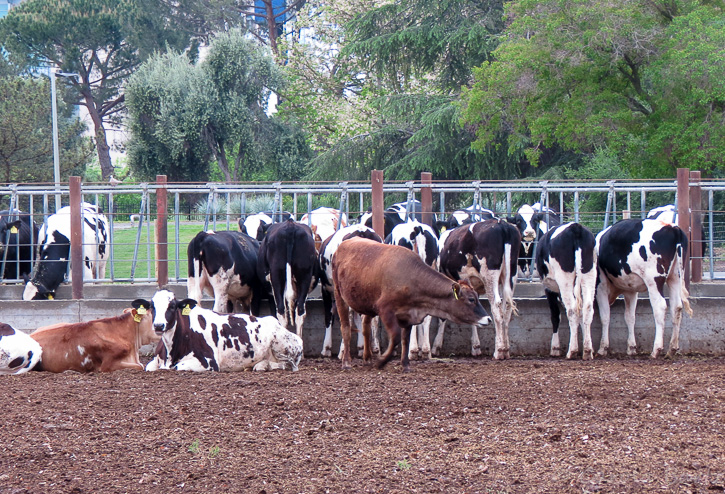 UC Davis is big in agricultural studies and the only university in California for veterinary medicine. Even though Kaefer's major is quite different from that, I feel she's stepping into her grandfather's (my Dad's) footsteps who was a veterinary. He would have been so proud of her!

The artwork on some of the residence halls displays another big part of UC Davis and its town: 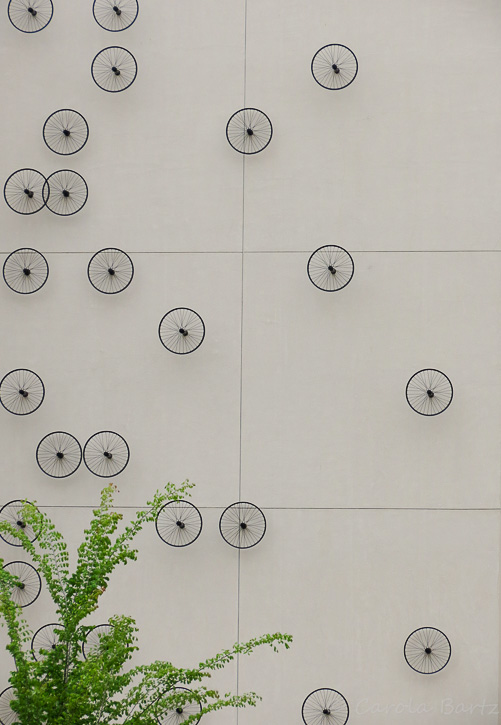 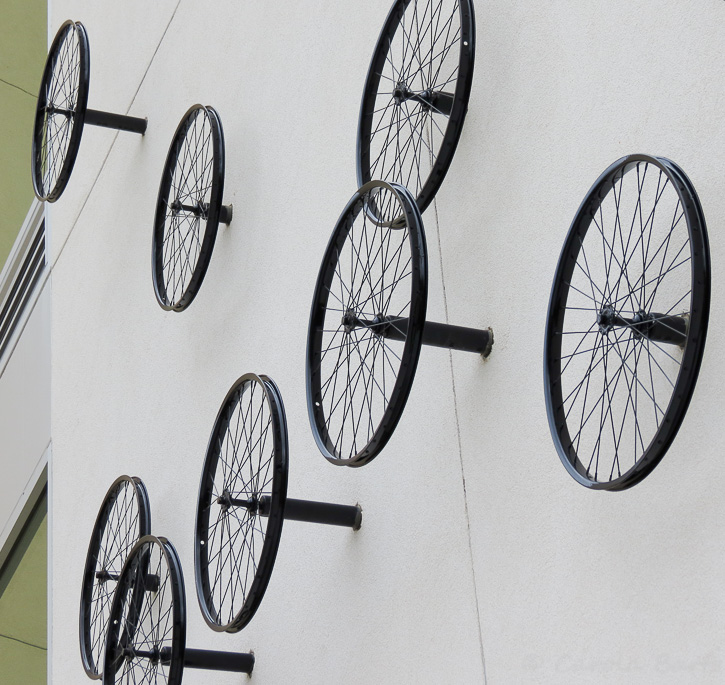 It is THE bike town. Davis is completely FLAT - ideal for commuting by bike. There are bike trails on campus with their own roundabouts etc., and in town there are bike lanes everywhere. It's a biker's paradise. When I was a student at the University of Tübingen I always rode my bike and I'm happy that Kaefer will do the same during her years in college. 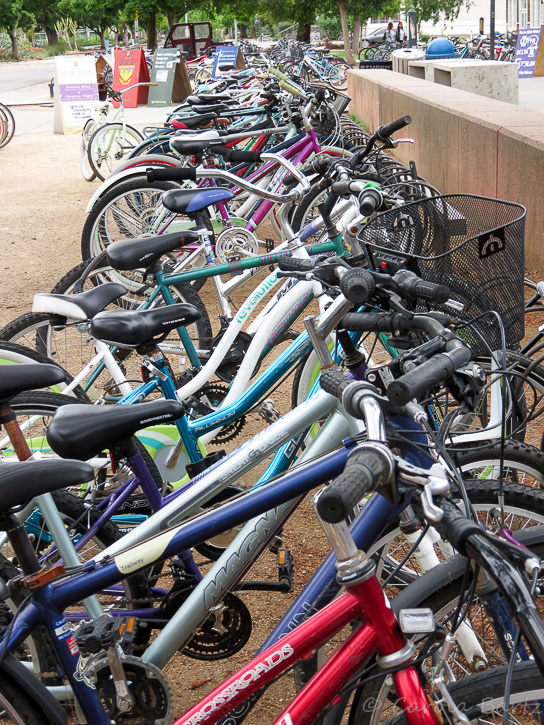 There are some nice buildings like the Lab with its giant green house on top. 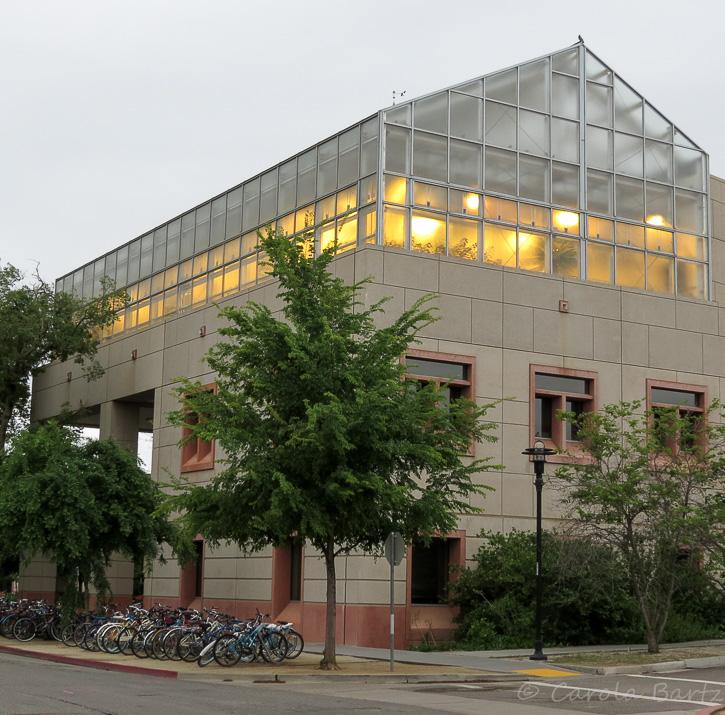 The Library with one of the Eggheads in front of it. 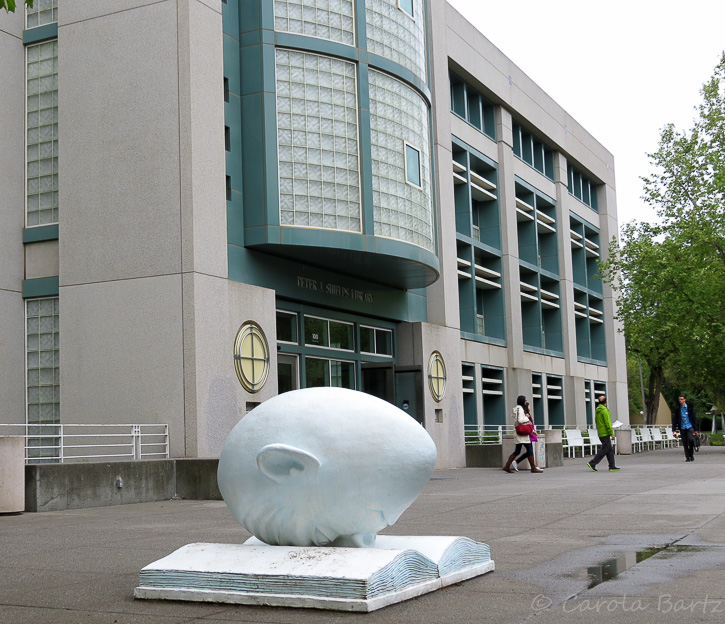 There are several of those Eggheads on campus. They are bronze sculptures created by artist and UC Davis Professor Robert Arneson specifically for this campus. This one is called Bookhead and students kiss it for good luck, especially before finals. 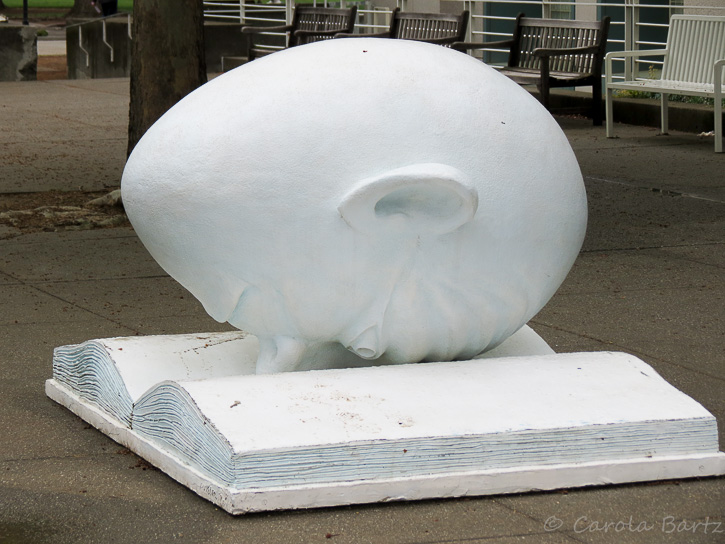 UC Davis is a very green and sustainable campus - in 2012 it was voted the Greenest University. I think Kaefer chose her major and her college wisely! So did the squirrels... 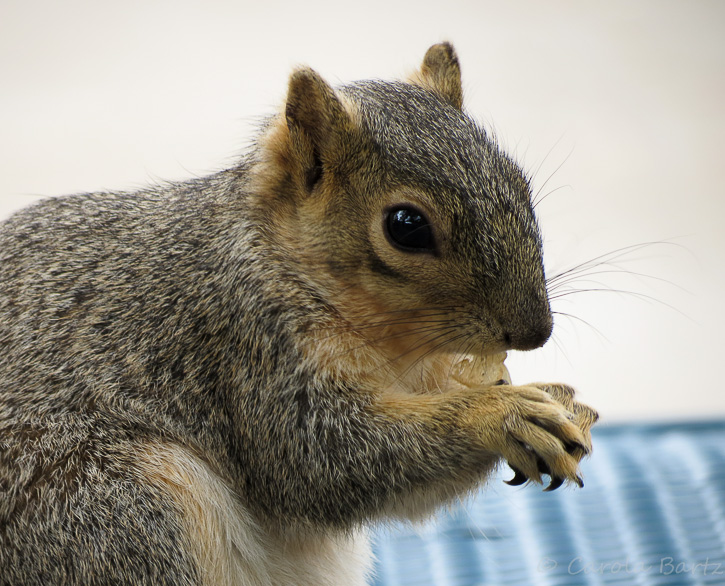 The decision has brought relief to all of us. At the beginning I was still thinking that Cal Poly would have been a great fit for her, but talking with and listening to her I understand that UC Davis offers her more flexibility. She also loves the diversity of Davis whereas Cal Poly has a predominantly white population. Kaefer looks forward to meet and connect with students from other countries. In this regard she's totally my girl.

To the new Aggie! 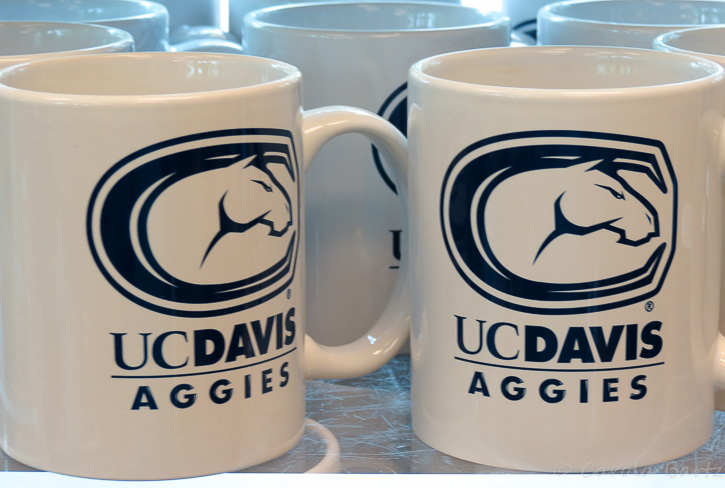 Good luck to Keafer. I am sure it is the perfect choice for her and it looks a superb place for Uni life.
Jo x

So busy looking at UCDavis that I clicked before I had sent my get well wishes to you. I am happy to hear that your surgery didn't phase you too much and I hope it is 100% successful in solving the problem.
Jo x

Hi Carola,
Hooray - Congrats to you all, Carola!

I love those Coffee mugs and the bicycle wheel designs on the wall - very unique and artistic!

UC Davis is a great school for whatever one wants to study.
They have a particularly good Statistics program, with emphasis on Time Series :)

Great snaps - I enjoyed walking through the campus with you.

I appreciate the update on the school.
So excited for Kaefer, and the discipline she has chosen - sustainability! Hooray!!

Have a Happy Weekend!
Peace :)

So glad to hear that you are on the mend and that the girl made an awesome decision! Here's to bright days ahead for you both ... and also for the guy in your family!

Excellent choice! It is a fantastic university and a wonderful setting.

PPS. Sorry I completely ignored the Surgery. Glad you are OK!!

HI Carola. I'm glad to hear your surgery was successful and that you had not many side effects afterwards. The Davis campus looks beautiful. I love the rooftop greenhouse and seeing all the bicycles. It sounds like a lovely area. Take care of yourself as you recover.

Sorry to hear about your need for surgery, but glad to hear you're on the mend. Congrats to your daughter for making her college choice.

Glad to hear you are feeling better. Congrats to your daughter. Looks like a nice campus and a good field to go into in this day and age. My youngest still hasn't decided where he's going for college so summer plans are on hold until we get it all figured out.

Gorgeous campus! This will be a new chapter in both your lives.

Feel better soon! All the best for your recovery! Congrats to your daughter! I am so happy for her! Great choice!

I love her choice! Good Luck to Kaefer!

Looks like a neat campus! Love the view of the cattle! Hope she enjoys her time there. Glad to hear you are recovering well. God bless!