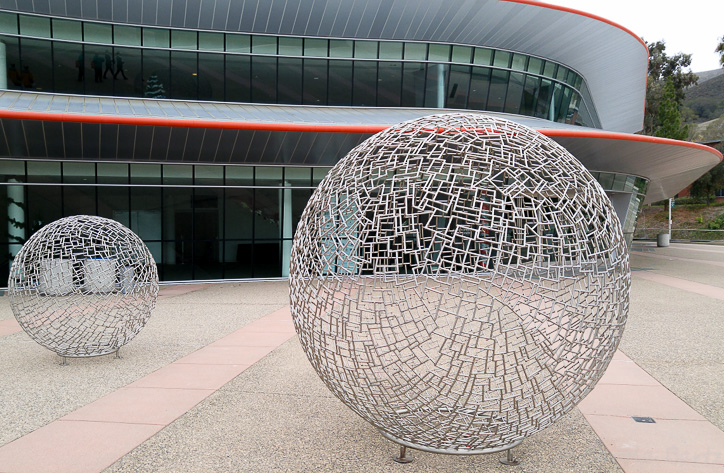 Some cool art at Cal Poly

After having looked at UC Berkeley last Sunday, we drove down to San Luis Obispo - or SLO - on the Central Coast to look at Cal Poly (California Polytechnic State University) one more time. We had visited the campus before during college trip to Colorado in the winter. At that time the campus was mostly empty since most of the students had left for winter break.

Kaefer wanted to check it out during the semester, and the cousin of one of her friends had offered to give her a private tour. 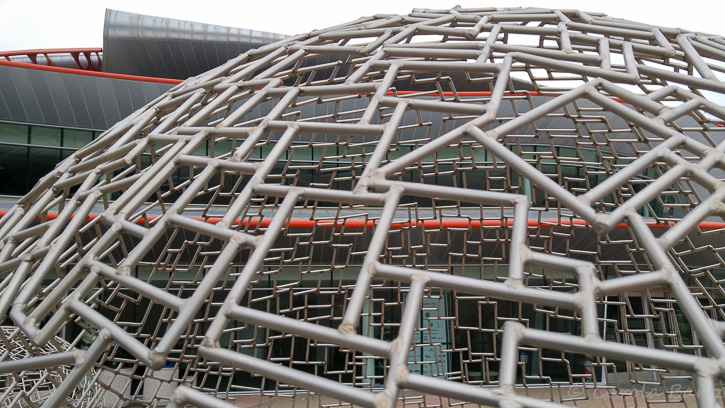 Kaefer's major at Cal Poly would be architecture. The approach here is very hands-on and practical, it's an accredited program that takes five years. 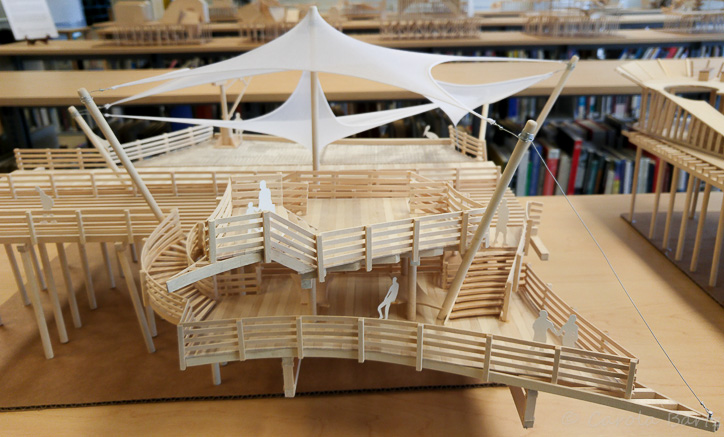 One of the projects of first year architecture students

While Kaefer went on her private tour, the Geek and I explored SLO.

It has a historic city center with a beautiful mission, founded in 1772. 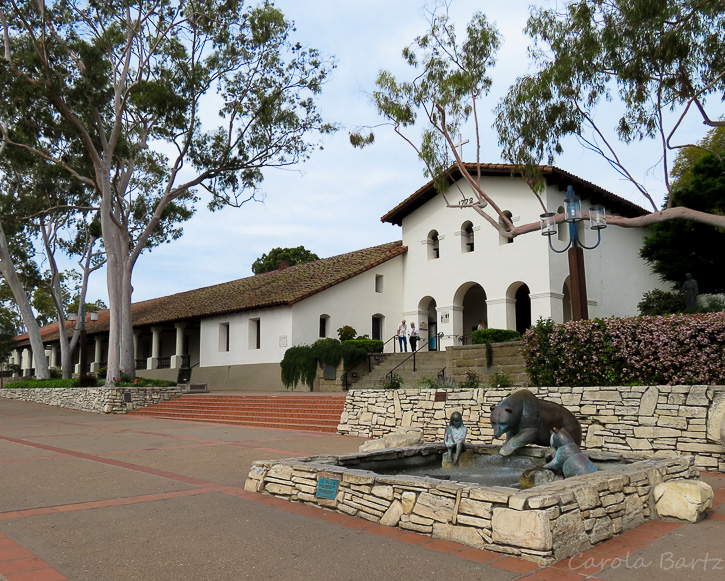 I liked the bear fountain in front of the mission that represents the Native Americans who lived here (the Chumash) and the grizzlies which used to be abundant in this area. 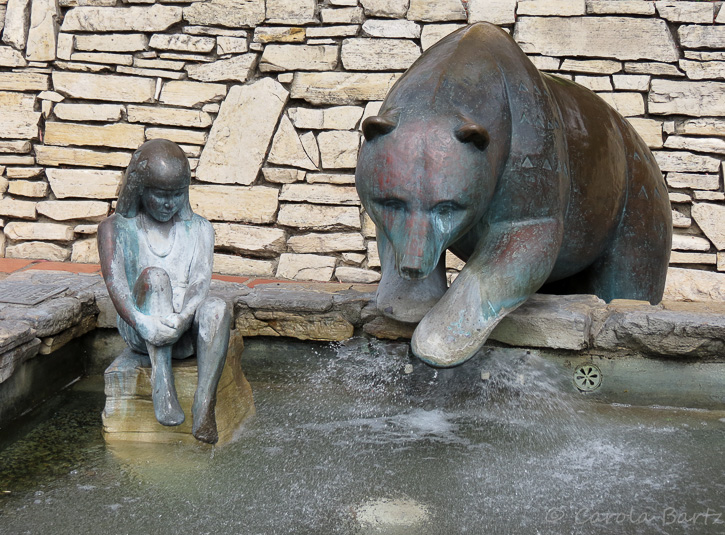 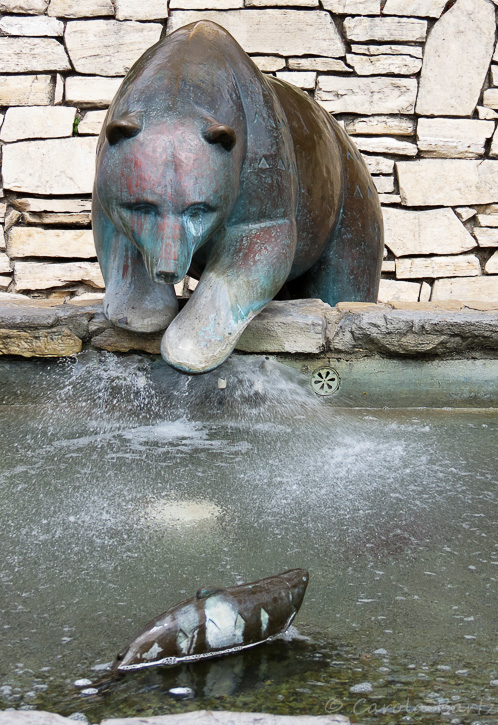 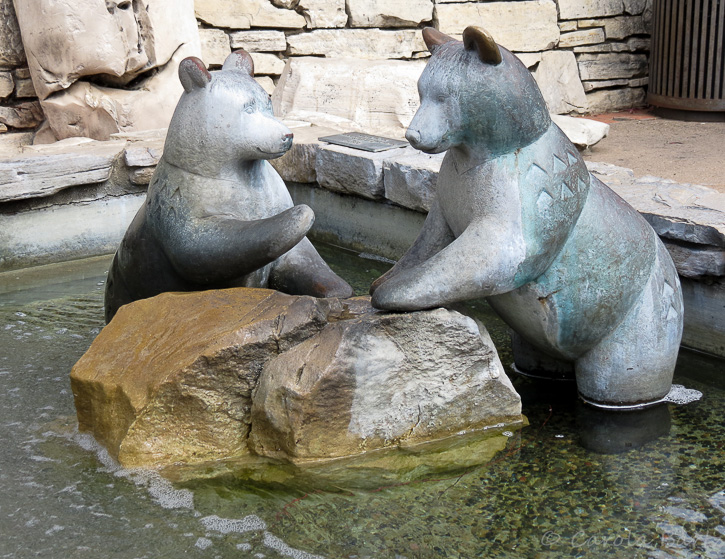 The mission has three bells of which I don't know whether they're still in use. 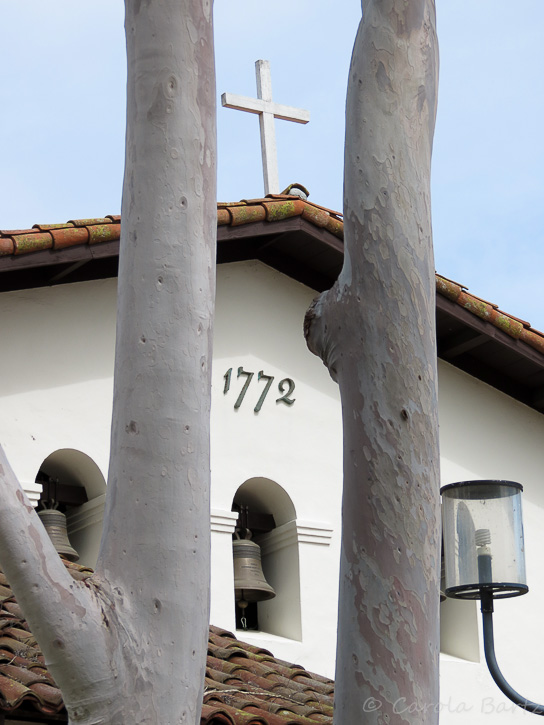 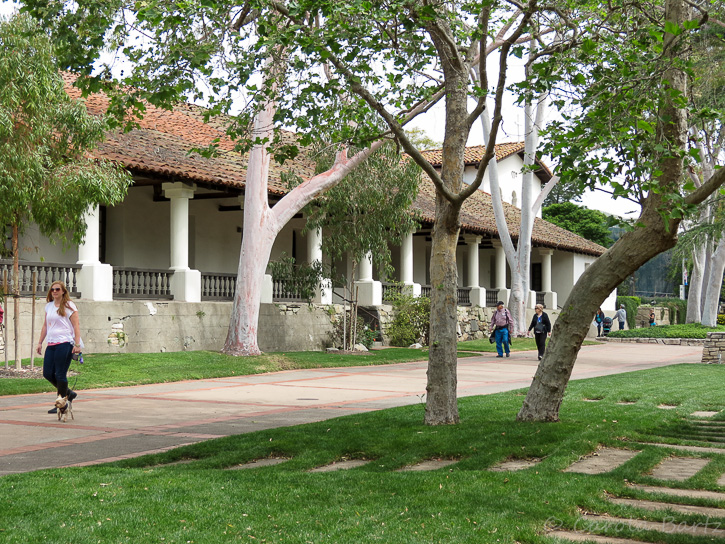 What fascinated me most about the Mission was the roof. 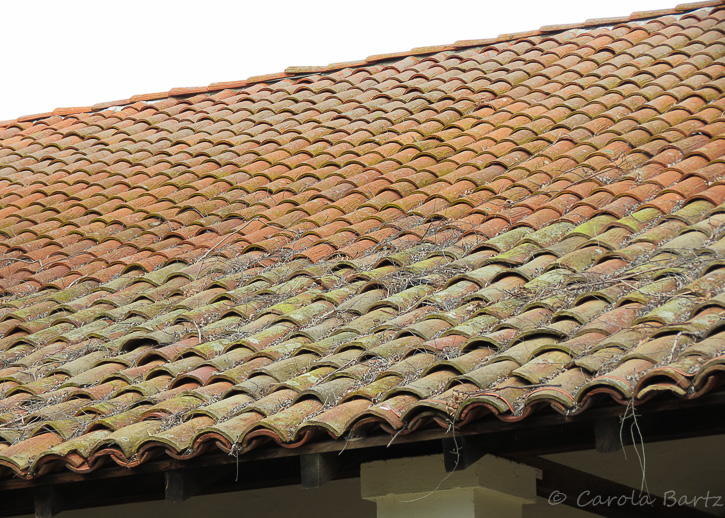 It is built of crooked terracotta shingles, some of them being clearly older than others. I took some close-ups - have a look: 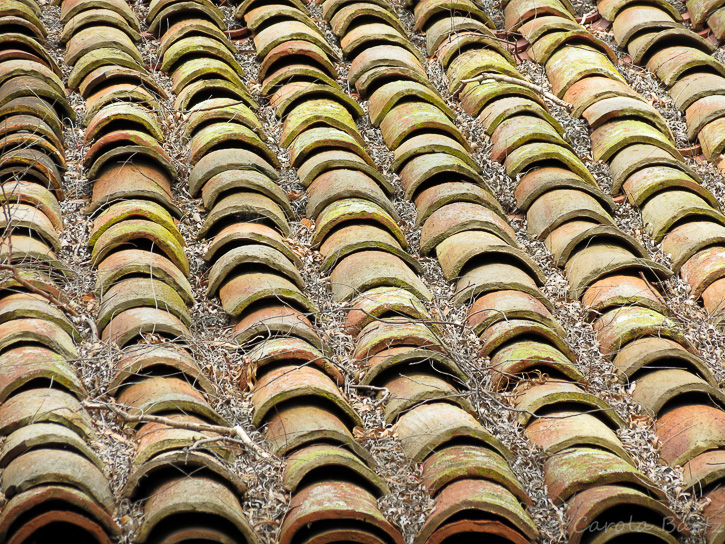 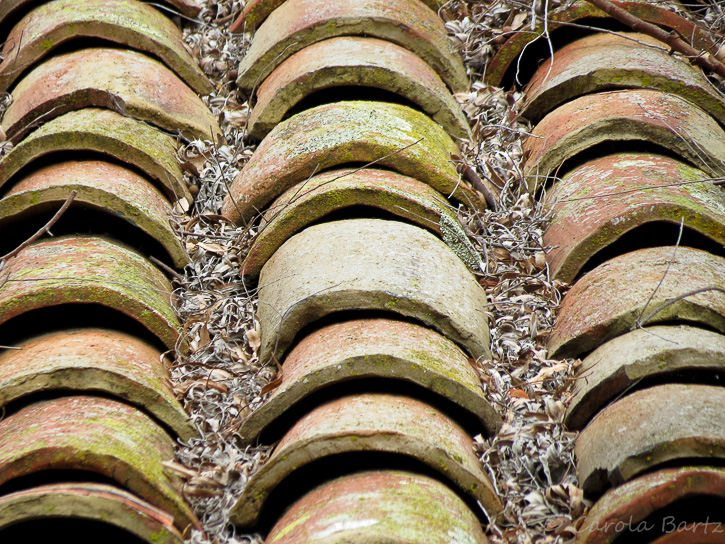 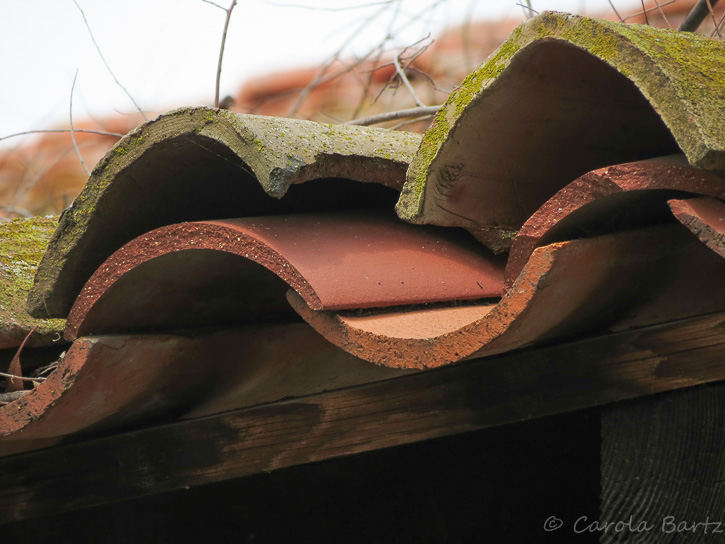 Like every mission, this one had some lovely nooks and corner. 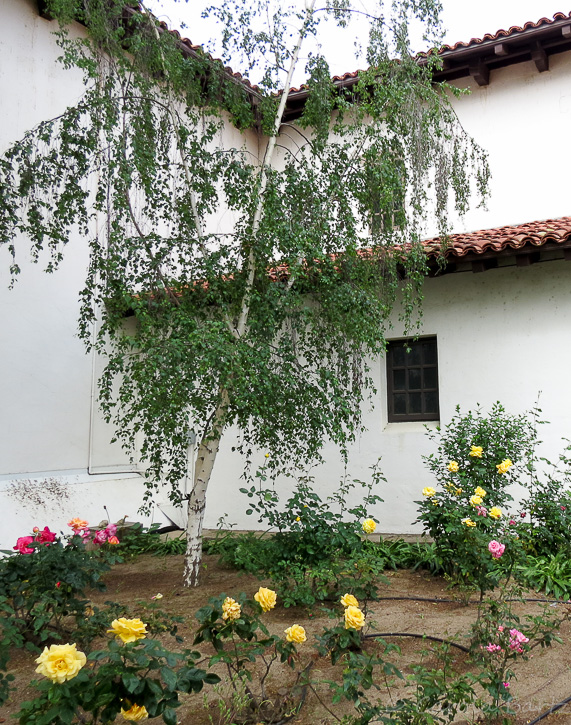 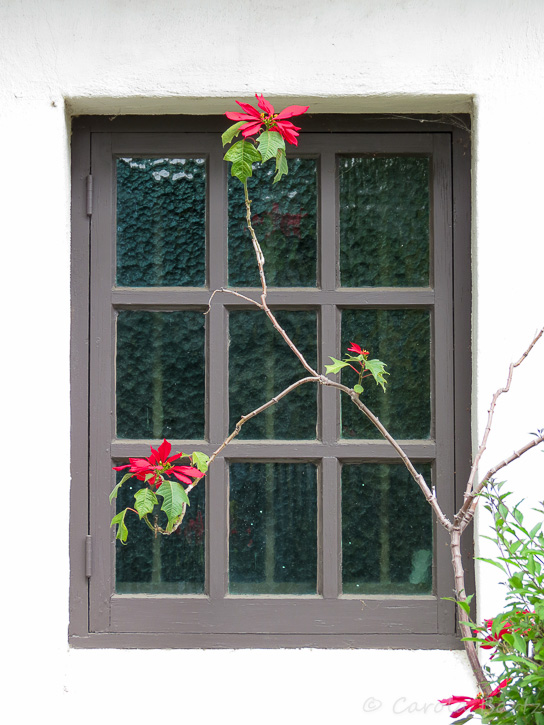 And right across from the Mission I discovered this porch of a restaurant with those colorful sunshades and a lovely terracotta roof as well. 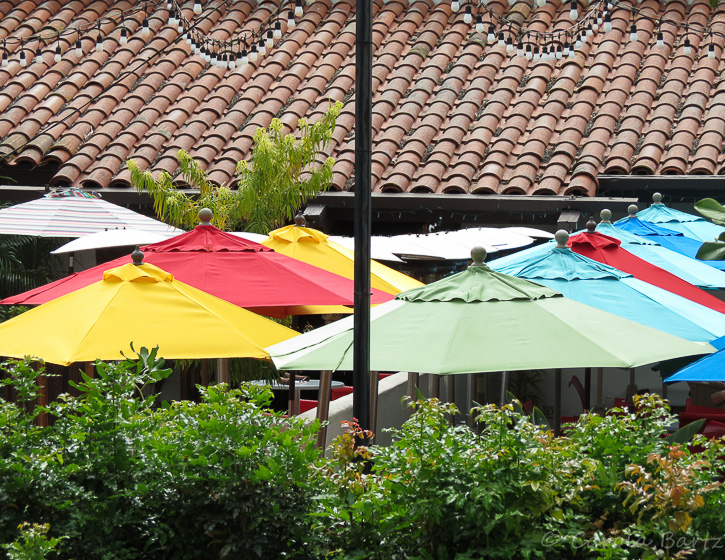 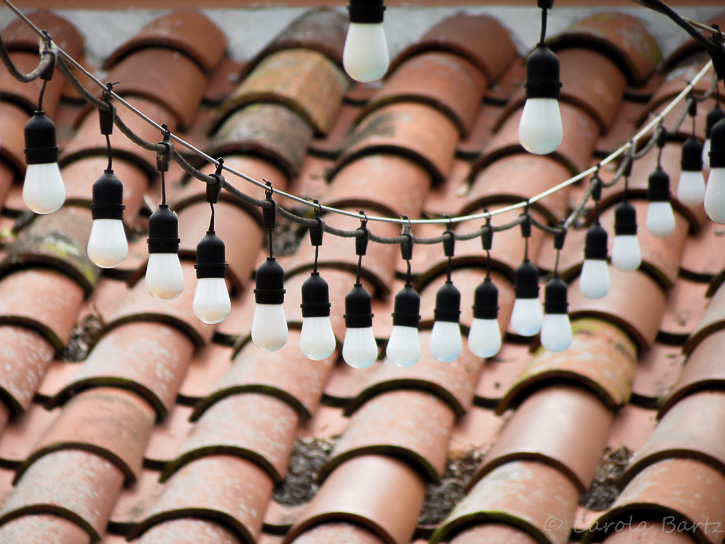 Downtown SLO is lively with lots of local businesses, restaurants, tons of trash bins (no one has any reason here to throw trash on the street as there is a trash bin every few yards). Beautiful trees are lining the streets and give good shade on hot and sunny days. Lots of traffic as well, but it is easy to get around as a pedestrian. 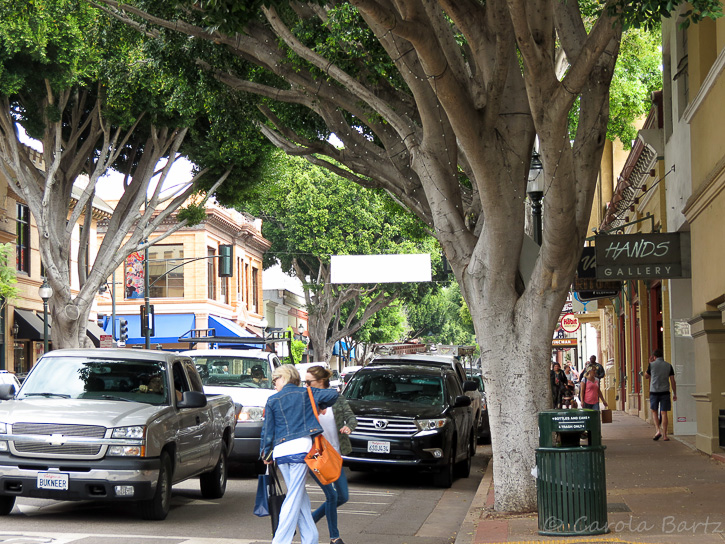 I liked this special kind of "meters" - here you can donate money for the homeless. I thought the idea was pretty nifty. I don't know whether they collect much money here, but since I saw a few of them I guess that they have some success with them. Maybe this is something my city should try. 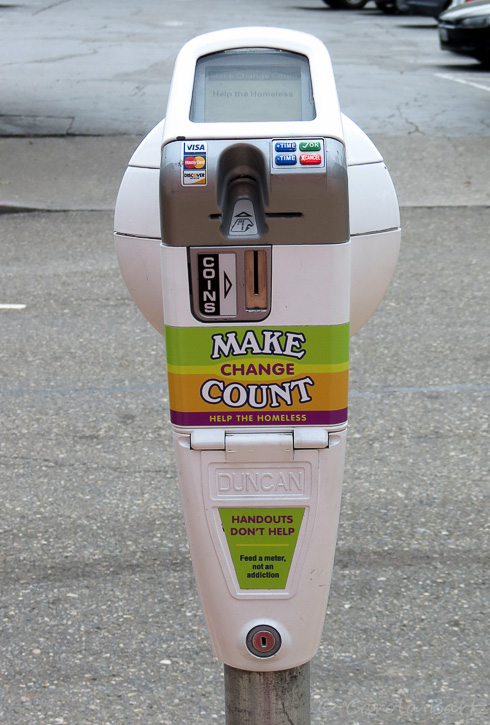 So - will Kaefer go to Cal Poly? She definitely liked it. But does she like it enough to actually commit to it?

What a truly delightful place.
And what a hard decision. Definitely not one to rush.
Loved the homeless support - and the bear fountain.

SLO is one of my favorite California cities. There's something about it that seems both fun and gracious at the same time. I love the closeups of the tile roof of the mission. Such a difference between the old ones - clearly handmade - and the modern ones! I'm looking forward to learning which college your daughter chooses to attend. They are all wonderful options! I'm sure she'll pick the one that's best for her, and she will do well wherever she goes.

Being a graduate of Cal-Poly I thought I'd put in a favorable word about the college.
The architectural dept is outstanding! as are the business, engineering & agricultural majors. The learn-by-doing philosophy benefits the students, regardless of their major. Although it's in the California State College system (as opposed to her other two choices, UC Davis & UC Berkeley) it is the most difficult to gain acceptance. The architectural industry LOVES graduates from Cal-Poly, primarily because of the depth of their hands-on experiences. And they will spend A LOT of time in their labs. The quarter system can be an adjustment - 10 week terms go by quickly & this college is not for procrastinators...
From conversations w CP students... frosh dorm life is fun! Especially if she attends WOW Week. Most kids make friends for life during the Week of Welcome (plus I have friends who have been part of this program for 20+ years). After the first year, there are other housing options on campus that weren't available "back-in-my-days" at CP-SLO. Off campus housing can be expensive... Plan on biking to class or lots of walkings involved as the campus is spread out... Much like a small city.
As far as the city of SLO... It's beautiful, great Farmers Market (Thurs night), activities in the Mission Plaza, great weather & close to the beach & lots of hiking trails.
Having moved to SLO 40+ years ago for college, I just never could leave. The job & housing market continue to be challenging, so most graduates leave the area for jobs in larger cities. It's unfortunate, but on the other hand, it's a great community to spend 5 years. Plus parents love to visit their students here!
The last plug... We could meet up for coffee & a photo walk... Is this a convincing comment? 😄

Wow - What a beautiful campus and photos of the same!
The crooked tiles reminds of an ancestral home we had, way back in time.

Now, for the school of choice, I am most definitely eager to find out.
But, I promise to be patient.
Please do share if you don't mind.

Have a Happy Day, Carola!
Peace :)

What a lovely place. Everything in these pictures looks so inviting to me.

Wow, what a gorgeous area!!!! I can't wait to find out which school she decides on!

The "hands on" aspect would definitely appeal to me at this stage in my life - can't wait to hear what she decides!

What an exciting time for you and your family. I read that Cal Poly at San Luis Obispo was rated no. 2 out of the 10 best US universities for architecture (the first one is Cornell.) It certainly looks like a great city too. Let us know what she decides.

Have visited the city and think it is charming. I so enjoyed looking at the views you captured.