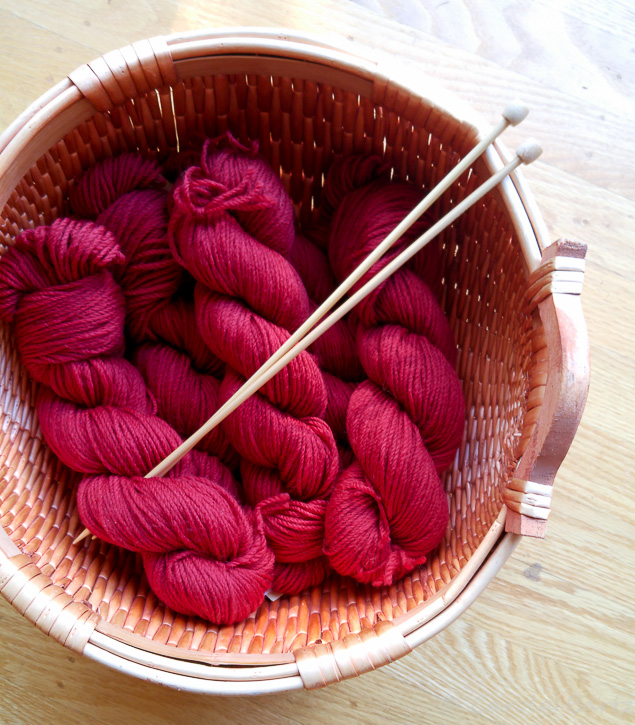 In January I found this beautiful red yarn in my favorite yarn store. I loved the rich ruby red color and the feel of the yarn. It is a 100% Australian superwash Merino wool by Knit One Crochet Too, called Sebago.

Over winter break we went on a college trip for Kaefer to check out some of the colleges she had applied to. Two of the colleges are in Colorado, and while we were in Boulder we met up with our friends in Erie. Their son with his wife and little daughter were there as well. The little girl is a leap baby, born on February 29th, 2012. This year will be her first "real" birthday, and I was thinking of knitting a cardigan for her. When I asked her what her favorite color is, the answer was "red".

Only a week later I found this beautiful yarn and bought five skeins of it. Before that I had downloaded the pattern for a darling little cardigan called "wee wildflower" by the hugely talented Alana Dakos. You can find the pattern here - it is the children's version of one of the patterns in her book "Coastal Knits". 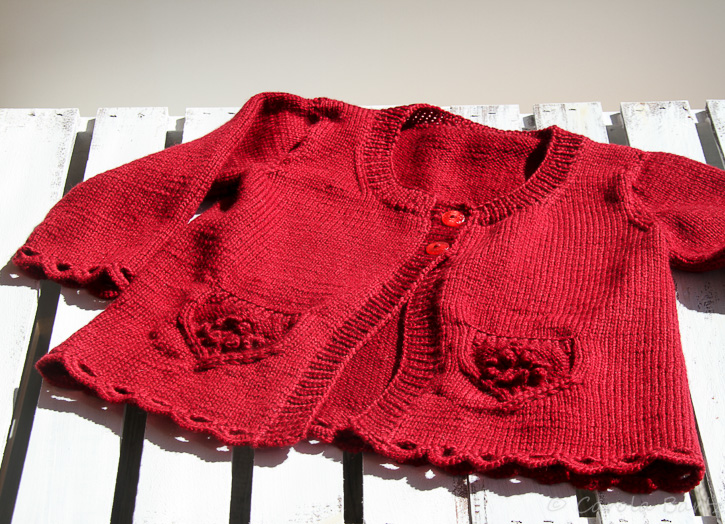 I can't say that the knitting went smoothly - this challenged me on some levels. First was that the yarn didn't run very fast with bamboo needles. After I changed to metallic needles that problem was solved - the yarn could slide easily from the needle and the knitting was much faster.

Look at the edging of the body and the arms of the cardi: 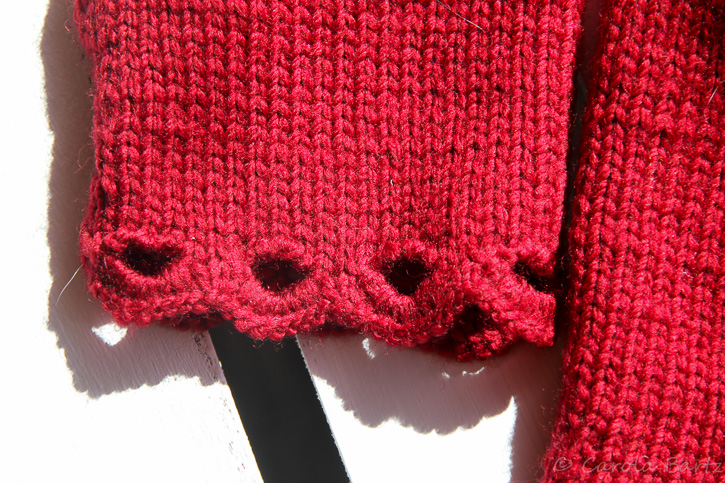 I first tried the technique for the edging on some scrap yarn - good thing I did, because I completely messed up the first time! I just didn't get the instructions until I read it all over again and tried one more time. It worked. Huge relief on my side since this was only the beginning of the entire project. What if I had been stuck that soon? 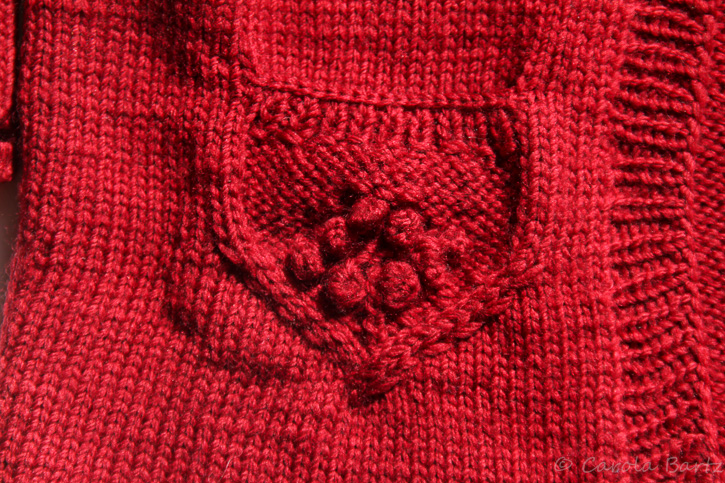 The next little challenge were the pockets. They represent a wildflower (even though that is really hard to see) and the making of the bobbles was a bit tedious. Not really difficult, though. Of course mine don't look half as nice as the ones in the pattern, but they are... unique.

Knitting up the cardigan and the arms wasn't difficult, it just took a lot of patience and time. The neck- and button bands were quickly done, although one of them is slightly crooked. However, I felt truly challenged when I had to sew the arms in the armholes. You have to know that I hate sewing, and this experience one more time let me know exactly why. I'm just not cut out for sewing.

The buttons were easy peasy of course (the only sewing I actually master) and I had found a couple of quite cute buttons at the crafts and fabric store. I took a deep breath of relief when I had weaved in the last tail of yarn and the cardi was done. If I ever do it again I will certainly change up things a little bit. I don't think I can go through the entire procedure again. Now I just hope that the cardi will fit that little girl and won't be too small. 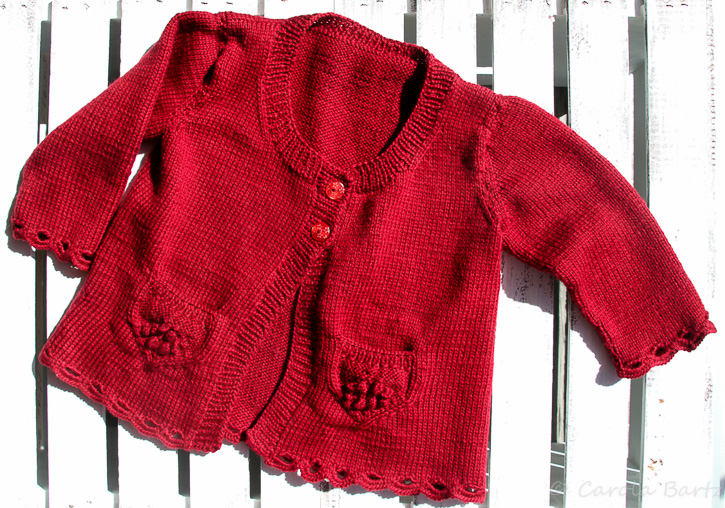 Did you knit anything recently?

First Nursery Visit of the Season 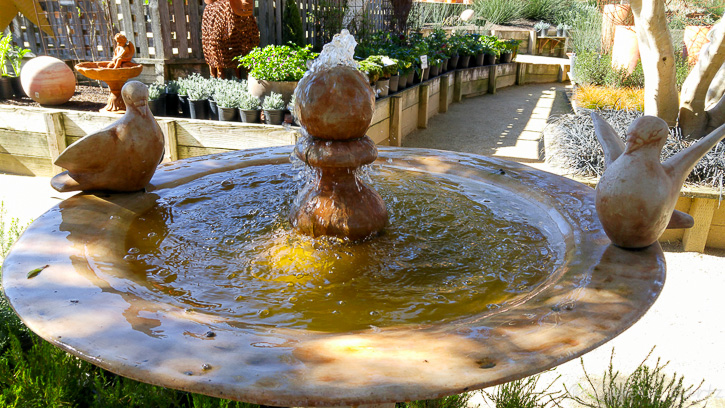 Last weekend Cottage Gardens in Petaluma, one of my favorite nurseries, had a sale on everything and of course Jo and I had to go. We love to visit for the eye candy, all the beautiful stuff they have besides plants. When I dream about my garden how one day I would like it to look, I envision fountains, sculptures, bird houses and pretty trellises. Cottage Gardens has all of that, and while I'm not buying any of these at the moment, I enjoy them.

I didn't bring my camera with me, but of course I had my phone and so I happily snapped away. The quality of these pictures is not great, I definitely prefer my DSLR, but they still give a good impression about this place.

They had a few fountains there, like the beautiful one in the top picture which would take up quite some space in a garden. The birds would love it, I'm sure.

This little cherub looks like he's cold. It was such a warm day, though! 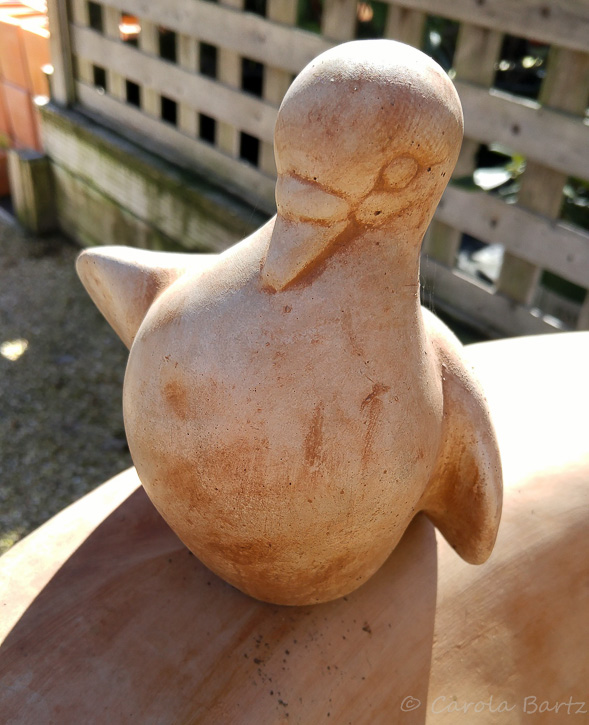 Pretty birds for the fountain 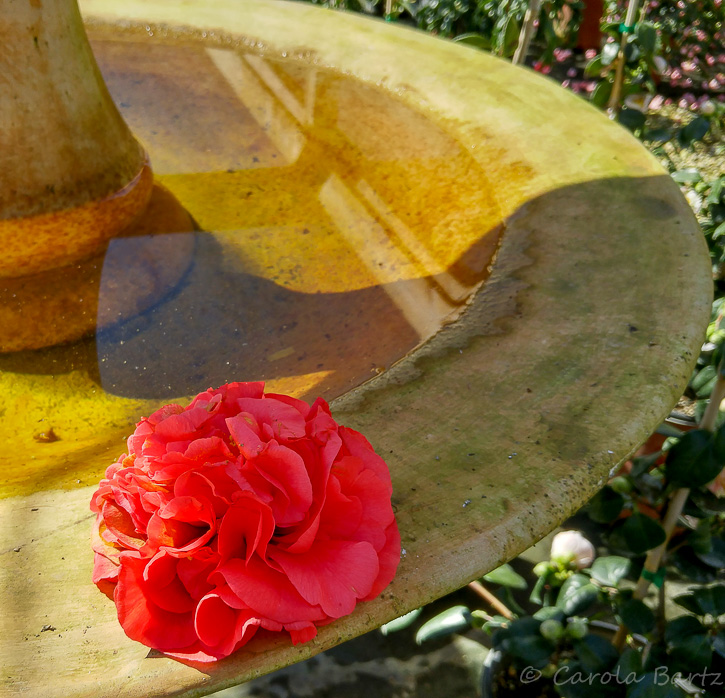 But a single Camellia blossom is just as beautiful! 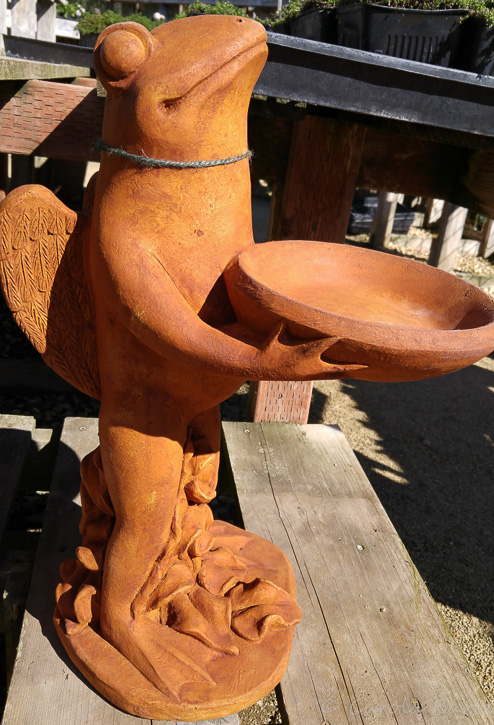 This little guy stole my heart. Can you see how he is offering seeds to the birds? I would love to have him in my garden.

Or - what about a sleeping cat? If you look hard at the image below you can see some more cats in the background - a sitting cat, a grooming cat and another sleeping one. That day we saw a woman who bought all three of them. I can only imagine her beautiful garden. 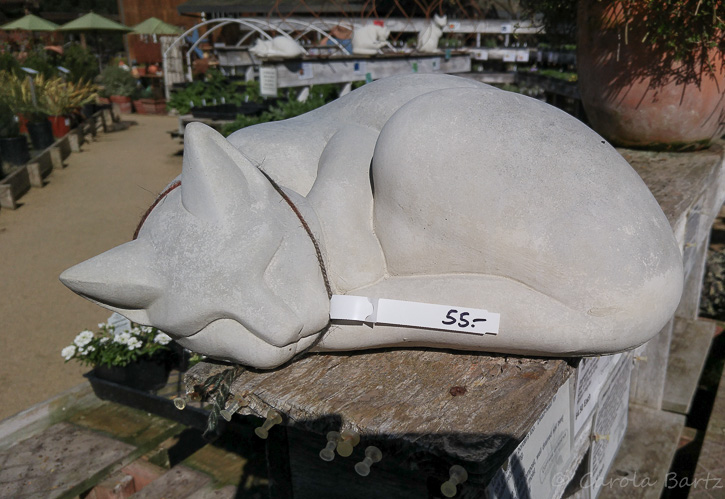 Perhaps someone wants to turn their garden into a calm and peaceful sanctuary. Here's the perfect company for that. 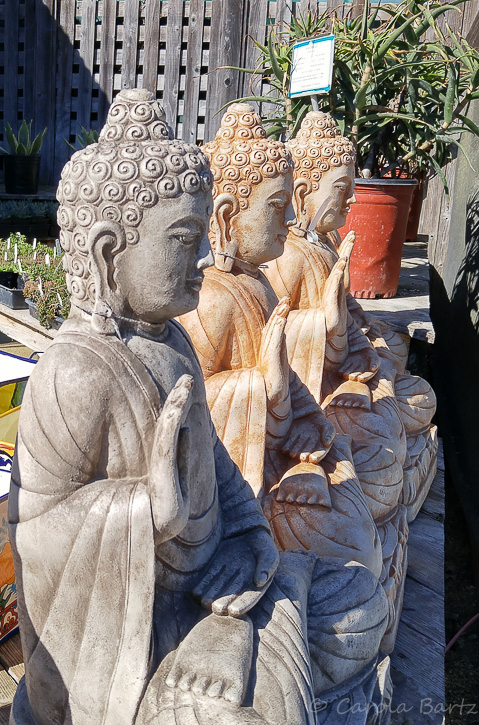 Or perhaps you prefer big old bottles, dusty with a few cobwebs? The nursery has them lined up for you! 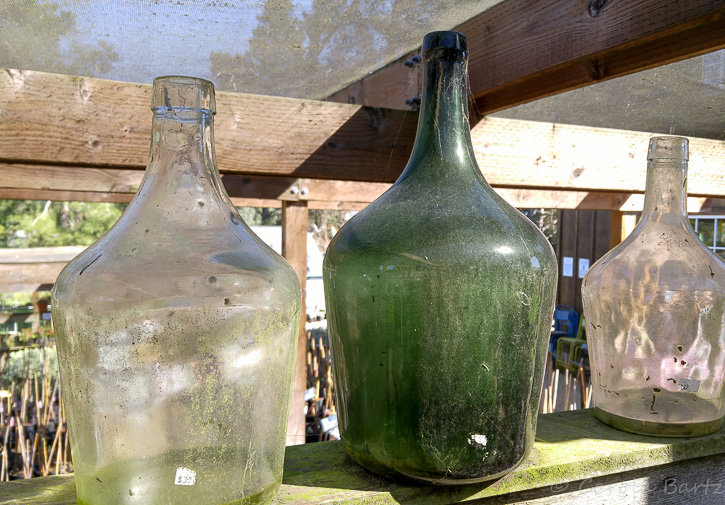 Of course they have pots and containers as well. After all it's a nursery! 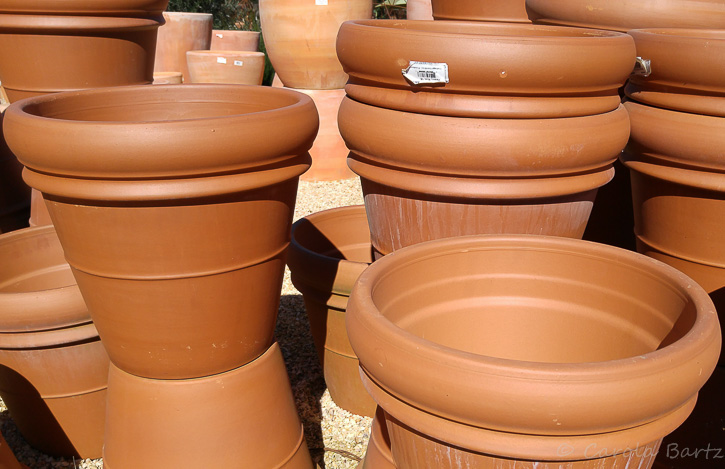 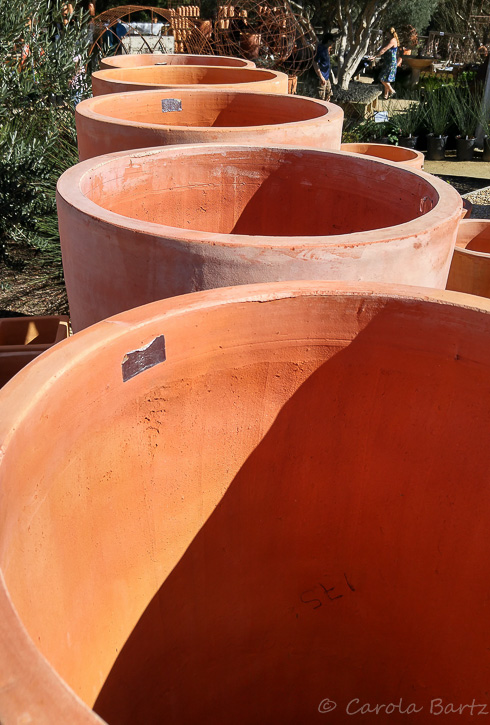 Needles to say that Jo and I couldn't leave this wonderful place without buying a few plants. I got a Clematis "Abilene" which is pink with lighter stripes and a purple Hopseed bush. Since we've had sunny and warm weather for more than a week I have been busy in the garden. My poppies from last year re-seeded and there are way too many of them. So I'm pulling a good chunk of them and just leave "islands" of poppies. This allows the other plants in my garden to thrive as well (hopefully). Last year, too many of them were simply overgrown by the poppies. And while the poppies are absolutely stunning when they bloom, I don't want them all over the place. It will be interesting to see whether my plan will turn out successfully.