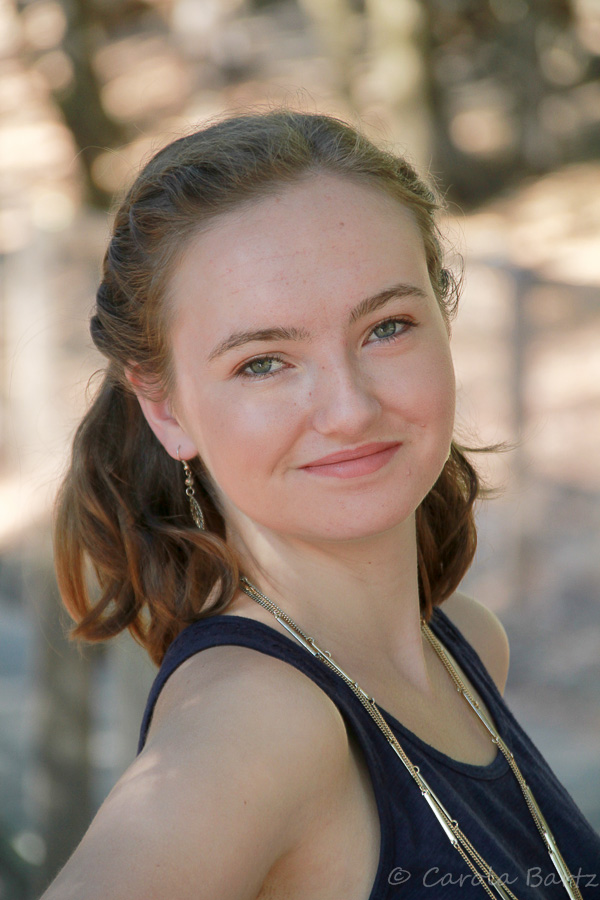 She's 18 years old today. As of today my daughter is officially an adult.

Like almost every mother I know I wonder where the time has gone. It doesn't feel like 18 years that on this day she was lying in my arms for the very first time, with her eyes firmly shut, refusing to look at this bright and noisy new world. She opened them a bit later - at that time they were deep blue and still hadn't the two slightly different colors they have now. I remember that back then everybody told me time would pass quickly, but I had no idea that it would actually fly and suddenly my baby was all grown up. 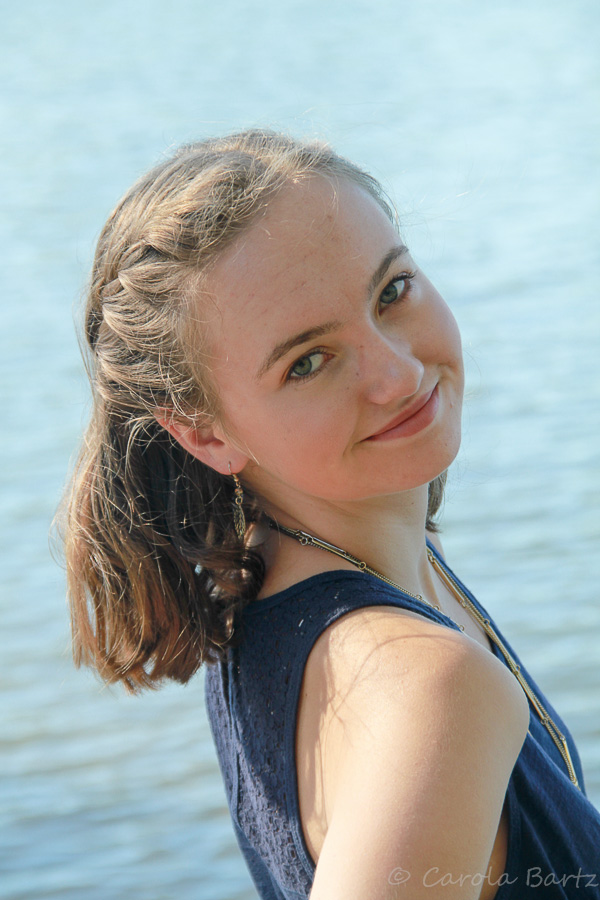 Those 18 years were mainly good years and when I look at Kaefer today I feel blessed to be the mom to this amazing young woman she has become. Since last summer when she went to Germany all on her own for the first time she has matured very much. The entire process of checking out colleges, applying to and finally deciding for one was a further step that resulted in more maturity. She certainly has gained more independence over the past 12 months. 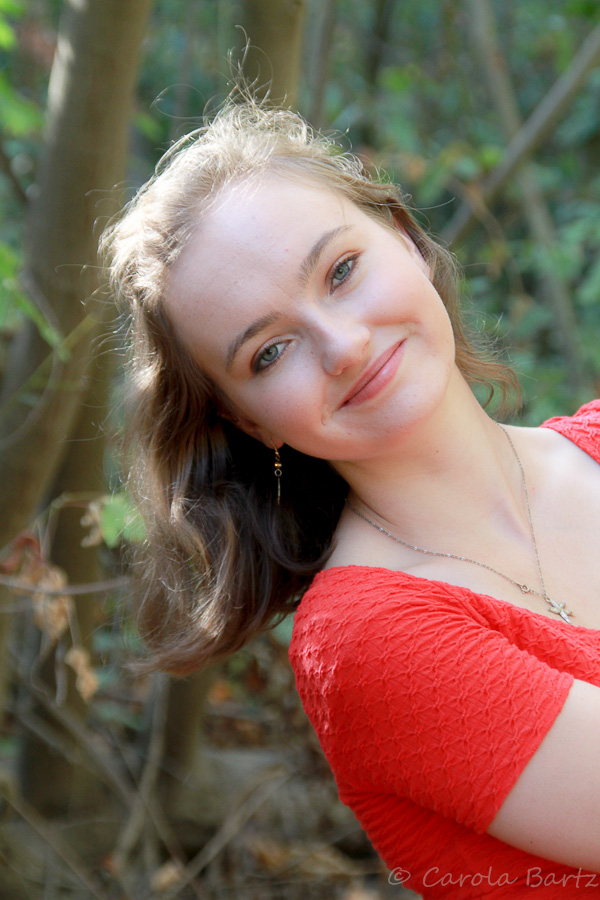 Still, she is a teenager with a lot of goofiness which I hope she will never completely loose. It's her sense of humor that will help her along her way through life. She is self confident without being arrogant and has a very healthy self image that is aware of her own faults. She is smart and hard working, creative, witty and kind. I've never heard her gossip or talk about someone behind their back.

She deserved a colorful bouquet from my garden. Here I am gathering flowers for her. 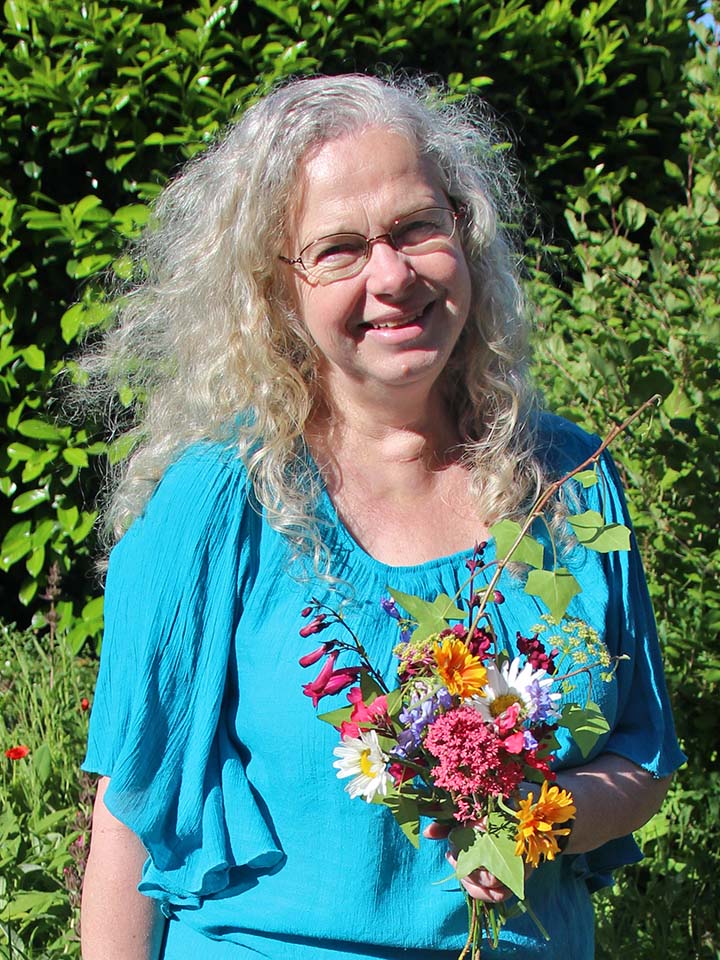 Yesterday was prom at her school - well, it wasn't actually at the school but in the Exploratorium in San Francisco. Before she met with her friends for the pre-prom we took a few pictures in the front garden. 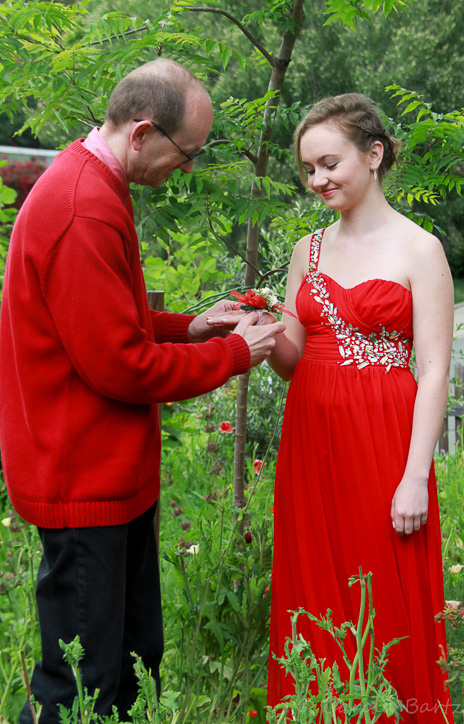 The Geek had the honor to put the corsage on her wrist. Against all odds the red ribbon matched the color of her dress perfectly. 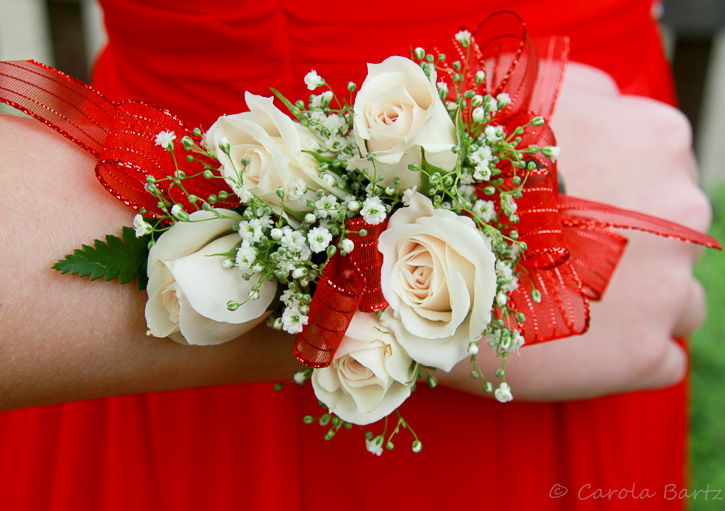 This is my favorite image from yesterday's photos. 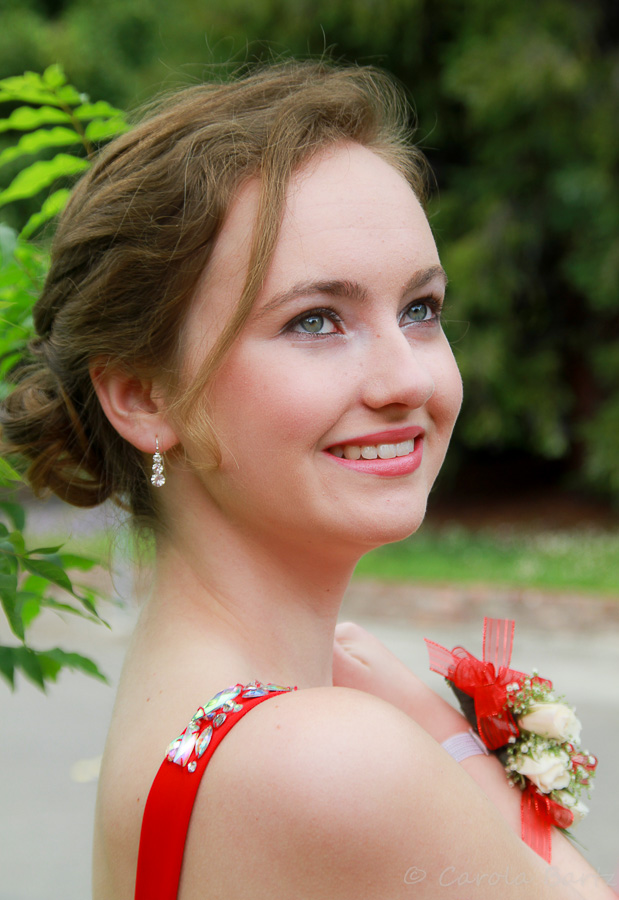 (The three top photos were among the shots I took for her senior picture.)

She is beautiful, Carola! Takes after her mom :)

Congratulations to a lovely young lady. The pictures are all great, you must have had a very difficult time deciding which one to use. And the photo of you is very, very cute too.

What a lovely birthday bouquet for such a beautiful young woman!

These are really lovely shots. Branching out into actual people photography is getting to be fun for me! lol

Hi Carola,
You all look very happy and lovely!
Fantastic photos!!
Have a Happy Week!!
Peace :)

What loveliness (including Mom and Dad)! Kaefer looks beautiful in her red gown (my favorite color). She has a wonderful smile. Happy 18 to her! I can't believe you have all those flowers growing already.

Your daughter is very beautiful! A belated happy birthday to her!

Heartwarming...happy birthday to your daughter :)

Such wonderful portraits of your lovely daughter! Happy birthday to her and you! Yes, the years do go spinning by, don't they?

Ah Carola, I see the apple doesn't fall far from the tree. Such a beautiful daughter you have. Happy Birthday!

Congratulations and Happy Birthday to your beautiful daughter and good luck for her future. How wonderful for her to look forward to this stage of her life and all that the future holds. You must be so proud of her.
Love the photo of you too.... her gorgeous Mom!
Jo x

It would scare me no end to have an eighteen year old daughter. I can barely survive having a 65 year old wife, but then I’m simply a worrier.