Trapped in a Churchyard

A photo, a story - here we are for Wednesday Wit and Wisdom over at Senior Adventures with Linda Kay! It has been two hours since she had left the car in the small parking lot in Widford and followed the signs along the hiking trail through the lovely Windrush Valley. It was a beautiful day for a hike - not too hot, the sun was hidden in the overcast sky, the air was rather humid. She had started her hike midmorning, and a while ago the tiny church of St. Oswald had come into her view.

It was a picturesque old church in the middle of nowhere. It had a small walled-in churchyard with a few gravestones. The area around the church was mainly meadows with the hiking path going right through the middle of them. There was no one around - except for a herd of cows uphill from the church. It was the typical English countryside in the beautiful Cotswolds.

She entered the churchyard through a kissing gate - it made a squeaky noise when she opened it to the one side, slipped in and then closed it again to the other side. She just loved these gates that you couldn't find outside of Britain. Slowly she walked around the churchyard and then entered the church. The old church smell that she met in each and every one of the old parish churches welcomed her at the door. She sat in one of the pews and took in the interior of the church until she decided that it was time to continue her hike.

When she stepped out into the churchyard she realized that her way out to the meadow was cut off - by the cows. While she had lingered inside, the cows had come down the hill and gathered right in front of the kissing gate.

She went closer, talking soothingly to the cows, hoping that they would run away when they saw her. But alas! - they seemed to be interested in her, stretching their big heads over the wall and trying to reach her with their long tongues. Usually she wasn't afraid of cows - on the contrary, she loved cows. But these were a few too many and she just didn't dare to open the gate and march right among them.

Slightly panicked she looked around, searching for another way out. There wasn't any. She imagined how she would be trapped for hours here, with no one coming by. Slowly she walked to the other end of the churchyard and decided then and there that she had to climb the wall. She knew that this wouldn't happen without any bruises, but she didn't really have a choice. So she scrambled - rather ungracefully - over the rough wall and walked down to the lower meadow, turning around every now and then and checking over her shoulder whether the cows followed her or not.

They didn't. But she couldn't shake off the feeling that the cows were whispering to each other about this strange young woman who hiked alone through their valley without any fear, but felt the cows were a menace. Only when she thought she was safe did she slow down and started to laugh hysterically.

I'm afraid this is a true story... 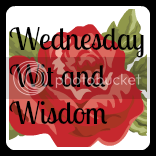 Oh Carola. What an experience, what a story.
Cows are BIG. I am not surprised you found them a little intimidating 'en masse'. And very glad you found a way out - and could laugh at it.
Stunning photo too.

Lol! A wonderful story! It took me back to when Steve and I were hiking in Derbyshire and were followed by a herd of very curious bullocks... Steve jumped over the gate and filmed me! The secret was to not turn your back on them!

That is a good story - and the fact that it is true just makes it better.

funny story. You know those cows would likely have paid no mind if you walked right through them.

Carola, what a lovely story, and kind of scary. Especially as a true story! You did a wonderful job of writing it, and thanks for linking into my blog!

Oh, Carola, it's a wonderful story! Your final revelation made me laugh out loud.

What a fun story. The picture is so pretty. Thanks for sharing this. I shared a little funny story too at Wit and Wisdom. I enjoyed visiting you. Have a great day.

Sounds like a very good option when surrounded by cows. I remember a similar experience for me when I was younger and dumber.

I love this story and I can understand your fear of the cows as they will follow someone and they are really big!! The photo is beautiful. Thanks for sharing.

The story is fun and the many colors in the photo are marvelous.
What a great find!
Have a Beautiful Day, Carola!
Peace :)

What an experience with the cows. I would do the same thing, to avoid walking in the midst of big sized cows, too scary!

You had us all feeling what you felt. A beautifully written story! Hugs, Diane

I love this story! What funny and sometimes scary predicaments we can get in when we go out shooting, or exploring, lol :-)