When season 5 of "Downton Abbey" was airing on PBS here in the States, it was followed by the British series "Grantchester". We were quite intrigued by the preview and decided to watch the first episode, only to get hooked on the series. In case you don't know it - it's about a young, unmarried Anglican vicar named Sidney Chambers in the parish of Grantchester near Cambridge in the early 1950s. However, every now and then he gets involved in solving crimes, working together with Inspector Geordie Keating. The two of them make a great team - heart and head. As a rather important sideline, Sidney is torn between two women, his friend Amanda Kendall who is engaged to someone else, and Hildegard Staunton, a German widow (keep in mind that this is shortly after the war).

We enjoyed the series, the English humor, the pub scenes - and the housekeeper of the vicarage, Mrs Maguire, who always lets out the expression "What the Dickens!". When the first season ended we were sad to see it go and not knowing which of the two women Sidney will eventually marry (it has to be one of the two). 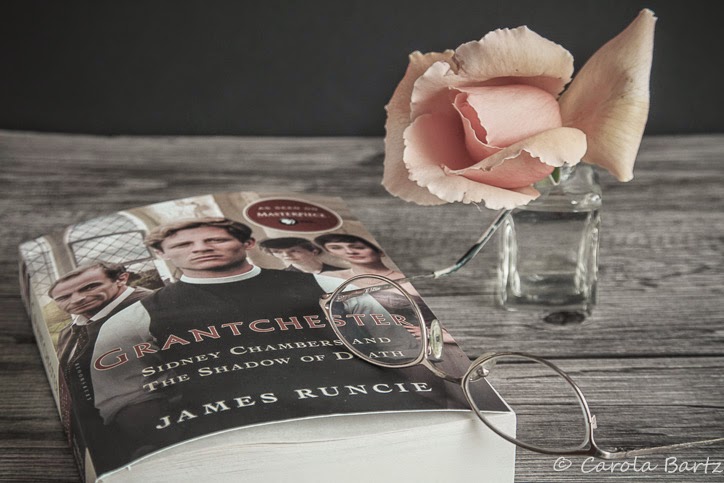 So when I went into our local bookstore I was delighted to find a copy of "Grantchester" on the shelves, written by James Runcie, the head of literature at the Southbank Centre in London. It is not a big surprise that the book is a bit - a big bit - different from the TV series.

It is even better.

The writing is extremely well and a pure joy. The characters are very well worked out, and while reading the stories - every case is a story - I could hear the voices of the actors and picture them which I liked. However, the cases themselves are different from the film, Hildegard only appears in the first story (but don't worry, she will turn up again in book 2 - yes, there are more books to come and I've heard that season 2 is already in the making) and the entire plots are deeper and more satisfying. The reader wrestles with Sidney in his question why God allows so much suffering, feels his desperation and exhaustion - in short, sympathizes and identifies with him. He is not a perfect man of God, he has his doubts, his mistakes, his questions, and exactly that makes him so human and well loved. Keating, the inspector, has his own battles to fight and does not believe in God, and Mrs Maguire (the housekeeper) is rather amusing - what the Dickens!

A wonderful read. My Friday Find for this week.

It sounds like a tempting book to add to my "want to read" pile. But what I really want to comment on is how much I LOVE your photo! The pale color of the flower picks up the skin tones in the book cover and I just ADORE the table you are using as your base! Sometime you need to pull back and show your set up...

Carola, that's a great find for your post. I think I may pick up the book, or download it, as it did look intriguing. Glad it was a good show. Maybe I'll catch it next season. Have a great weekend!

Hi Carola, What a neat photo with the book, glasses, and rose. You really have a special ability to compose wonderful photos. Thanks for the book recommendation.

OH, that does sound like a wonderful series - I've made note of it - thank you Carola!

A wonderful photo and a great post. Why is it that TV producers and directors feel the need to change things? I have been very disenchanted with the televised versions of many books recently. I must try and watch before reading more!

I looked for Grantchester on Netflix but it's not there...yet. But, what fun to find out there is a book series on this show! Thanks for sharing it with us. It does sound very interesting. Pam

THIS is almost exactly how i got hooked on Downton Abbey.... Will have to check in to Grantchester. bet it will be great. On my short list for today! Thanks Carola and love your photo with your post!

It's a nice image and an interesting book, Carola. I'm sure I'd love it!

Sometimes both the book and the film are good though different and I find it difficult to switch between them and remember the differences... :)

What the Dickens indeed! It sounds incredibly interesting as well! Enjoy your weekend.

Thanks for the review. It sounds like a book I'd enjoy.

Great post! I love the photo and thanks for sharing about the book ;o) I haven't been in blog land for awhile, but I am back ;o)

I almost always prefer a book to a movie or a television series. To the extent that I usually refuse to see the televised version of books that I love because they don't (cannot) match the images in my head and because they tamper with the story.
Granchester the book sounds right up my (very broad) alley. Thank you.

I really enjoyed the first season and I am so happy to hear there will be another. I haven't read the books but they sound good.

I just discovered your blog and I'm glad I did. I've spent a few minutes enjoying your lovely work. Not only are you a wonderfully artistic photographer, I love your commentary. I'm going to find "Grantchester".

Beautiful still life. I loved Grantchester and may well check out the book as well.