Easter Sunday is such a great day to give some thanks, don't you think? 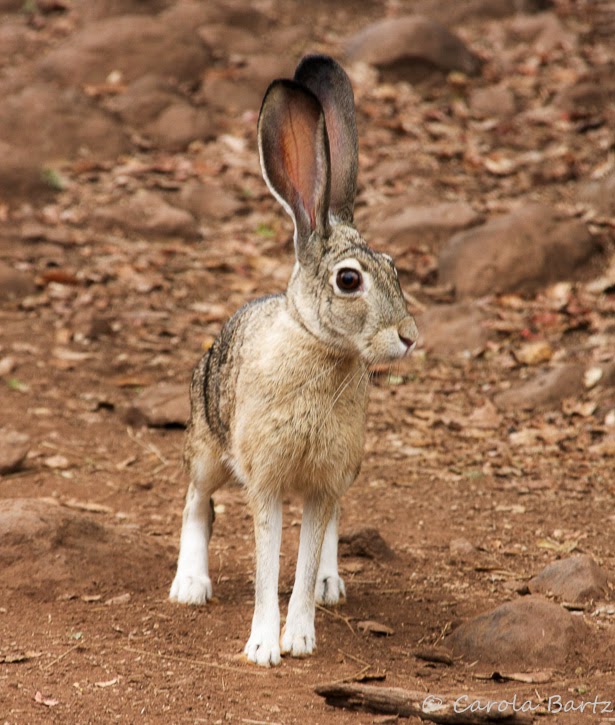 First of all I hope all of you have had a wonderful Easter Sunday. Ours was quiet but very nice. It was quite telling that in our drought ridden county it was raining today!! It is not raining for weeks and months, but on Easter Sunday the skies are opening up with a wonderful downpour. I enjoyed it, but I can imagine the disappointment of many children who were looking forward to an Easter egg hunt. It was clearing up in the afternoon, so there was still enough opportunity for that! 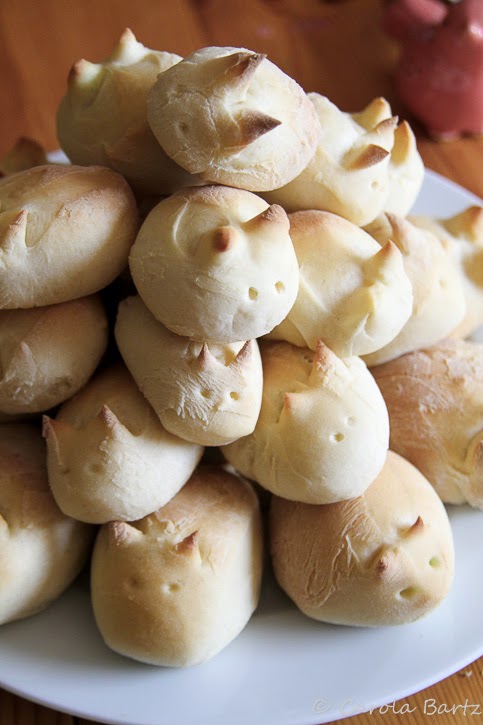 Kaefer and I baked some bunny buns (we found the recipe on Pinterest). While they didn't turn out like the ones in the recipe they were still delicious. Many of our bunnies didn't resemble bunnies but looked more like cats or even little hippos! Kaefer and I had fun baking together nevertheless and even made fun about the weird shapes our "bunnies" decided to take. I love to spend time with my girl this way.

Our week was rather uneventful. Kaefer was back to school, the Geek back to work and I tried to find my old routine again which is always difficult on the very first day. I have to admit that I get a bit tired with routine and I want to shake it up a little bit. Thankfully I can do this since my work - the shop - allows me to do exactly this. Usually I go to Jazzercise in the morning, but after having done this for more than five years I feel a bit exhausted with that. I still will go to Jazzercise - I need it, plain and simple -, but I will not do it five days a week anymore if I don't feel like it. A good brisk walk does wonders, too, and it's outside which I prefer so much more anyway. This week I walked around my lake again, but since I wanted it to be a brisk walk I decided not to take my camera with me, otherwise I would have stopped all the time and take pictures. I also knew that the birds weren't there but at the smaller lake, so I thought I was safe. Well, of course, I was walking just ten minutes when the first deer hopped into my way, then another. A little bit later I discovered a black-crowned night heron (so they are back now) and when I was almost around the lake I saw another one. Murphy's Law I guess. However, even though I stopped for a short while to watch the animals and birds I got my brisk walk and was quite sweaty when I reached the car. When I was starting to drive out of the parking lot I saw a coyote running across the picnic area - what a sight! I drove around the one-way road and back into the parking lot, got out of the car again and watched the coyote who by now was on the other side of the dried up creek and walking up the slope of the hill. I could watch him/her for quite some time until s/he disappeared among the trees. How wonderful! What a lovely start into the day! Kaefer was the wise one who told me that if I had my camera with me I probably would have taken so much longer walking around the lake that I wouldn't have seen the coyote at all. So it was a good thing that I didn't have it with me. Smart girl!

So here's a picture of a coyote that I took in 2008 in Yellowstone National Park. 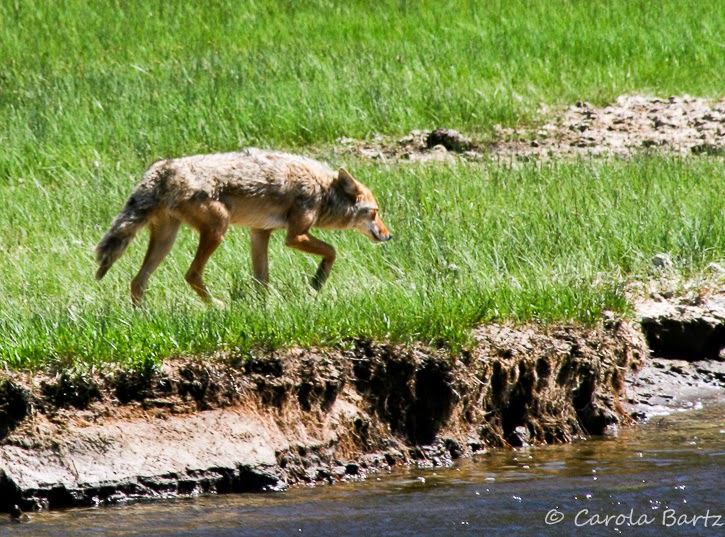 Our "neighborhood" coyote is still around - I heard him or her again last night. S/he seems to be gone for several days up to two weeks, and then we suddenly hear the howling. It's kind of a sad sound I think and utterly lonely. I'm glad that s/he is still around.

There was a lunar eclipse in the very early hours of Saturday. We got up at 4:45 am to watch it, and it was so worth it. These nature events make me feel very small and completely in awe of our entire universe. 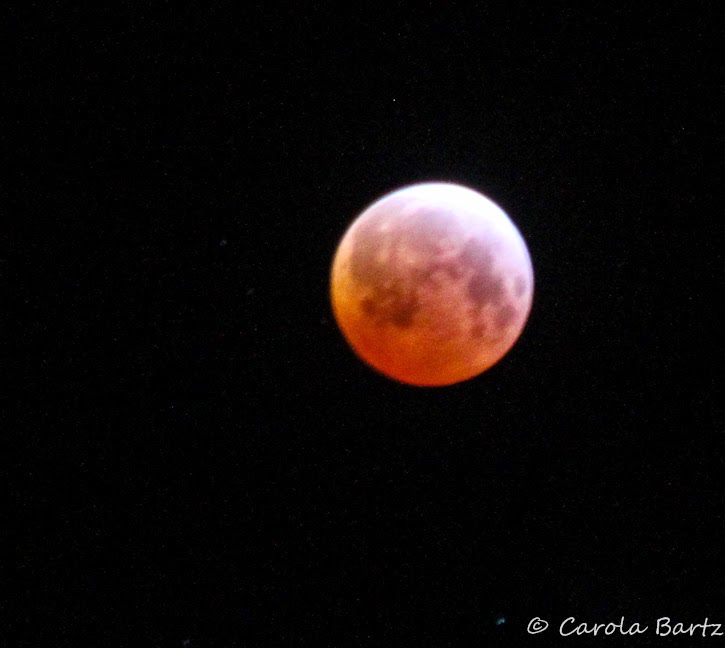 I wish you a wonderful new week with many opportunities to be grateful.

Love the bunny buns - and yes, they do have a striking resemblance to cats.
We missed the lunar eclipse because of heavy cloud. Rain was predicted and we got less than half a millimetre. Ditto the next day. Today (Monday) we have had a little more.
Fingers and toes crossed the incontinent pigeon rain (splat, splat and its gone) will be replaced by the real stuff.
I do love the smell of rain, and the way I can almost feel the garden sighing in relief...

Happy Easter, Carola! WOnderful pictures! We had a solar eclipse here some weeks ago. Yes, those events make us feel so small.

That is one big jack rabbit - not quite the Easter bunny one thinks of. Love the moon picture.

love the bunny buns! so cute! and love the hare! glad you enjoy jazzercise. used to do it years ago when we lived near dallas. it was a lot of fun. :)

so nice you are getting a little bit of rain.

the bunny buns are cute even if they don't look like bunnies.

Wonderful photos. The buns are really cute and I just know they tasted delicious. We have coyotes around our area although I haven't heard them all winter. I expect they'll be coming around the fields looking for food soon. I don't like to hear their 'barking' and howling though. It's too creepy sounding when you know there are more than one and they are hunting a helpless animal, although I know they have to eat too. Have a wonderful week.