A Global Cultural Icon Made of Iron 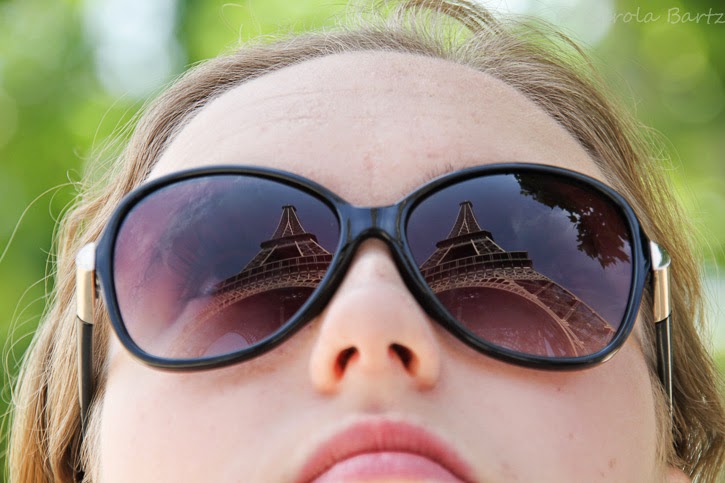 You can't talk about Paris without mentioning the Eiffel Tour, or as the French would say, la Tour Eiffel. Like it or not, it's impossible to ignore it since it is smack in the middle of the city right at the river Seine and visible from so many places. 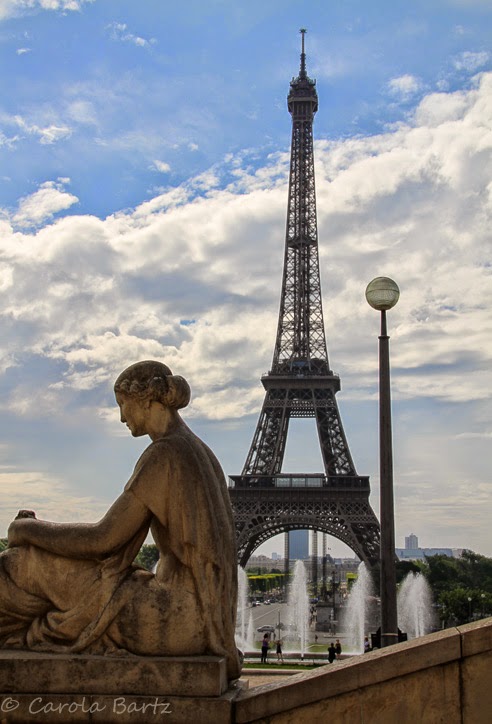 It was erected in 1889 as the entrance arch to the World's Fair and first was criticized by many and loved by not so many. This, however, has changed over the years as the Eiffel Tower has become a global cultural icon of Paris, if not even the entire country of France. It is named after its engineer, Gustave Eiffel (1832 - 1923), whose company designed and built the tower. Of course you know the other famous landmark designed by Gustave Eiffel that is located on Liberty Island! 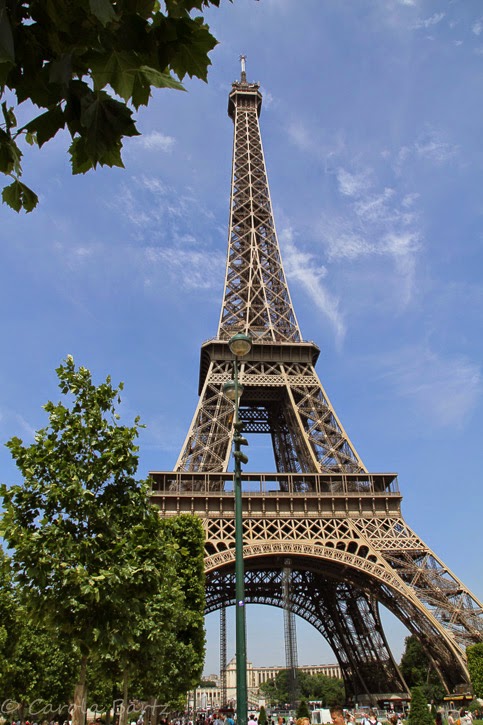 The pillars in the middle are erected in preparation for the celebration of Bastille Day, July 14th

The Eiffel Tower is 324 meters (1,063 feet) tall and has three levels. You can get up the tower by escalators to all three levels, but you can also take the stairs and climb up to the second level. If you want to get further up to the third level you need to take the lift since the stairs at this height are not open to the public. 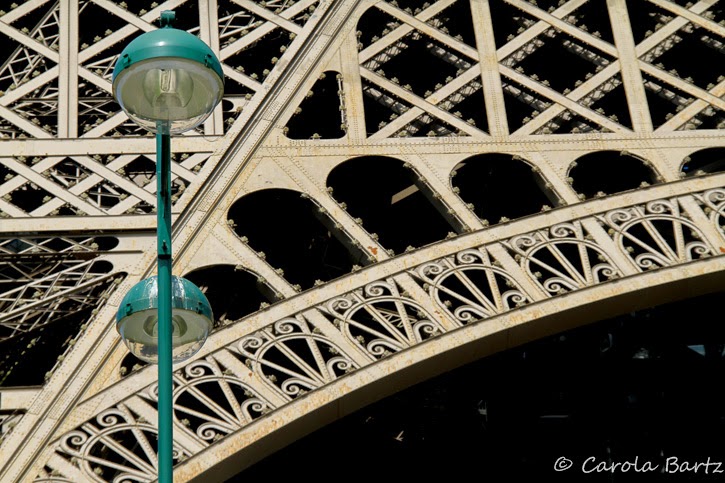 I love the intricate work of the wrought iron in the arches - it is so beautiful to look at. I am pretty much in awe of this magnificent work. 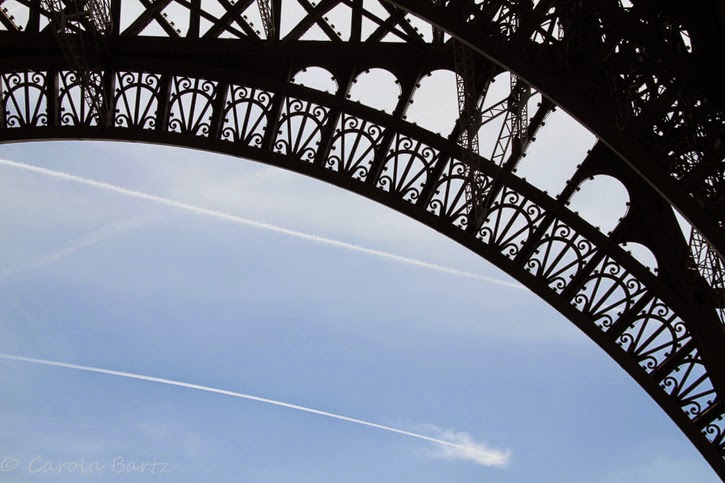 When we visited the Eiffel Tower we decided to take the stairs to the second level. This means climbing more than 300 steps, but that sounds worse than it actually was. It's much better than standing in line for the lifts for a long time - it's not even half as crowded on the stairs since most people opt to take the lifts. 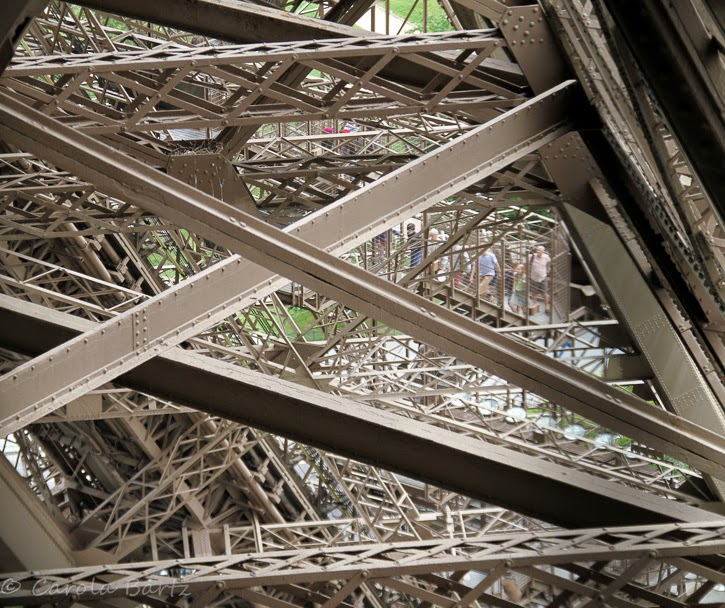 Can you see the stairs? You climb up between all the beautiful iron work and can really appreciate this extraordinary engineering. The views in between are pretty cool as well. 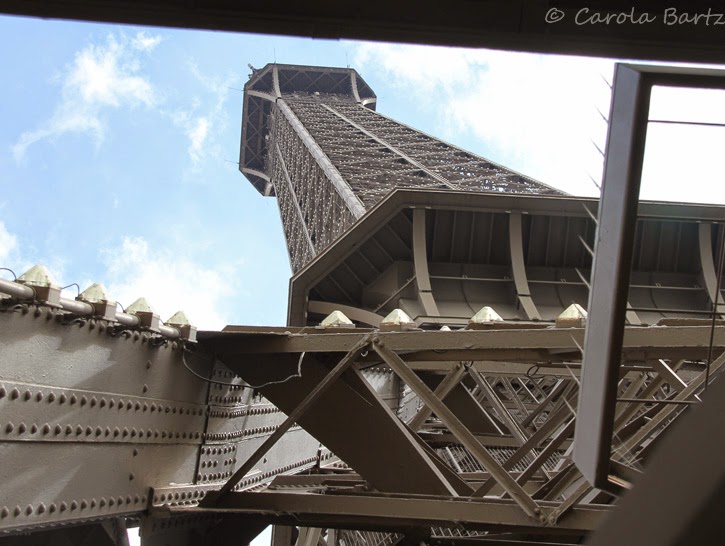 On the second level you have to take the lift if you want to get to the top of the tower. We did go up there, however, the views over Paris are much better from the second level. 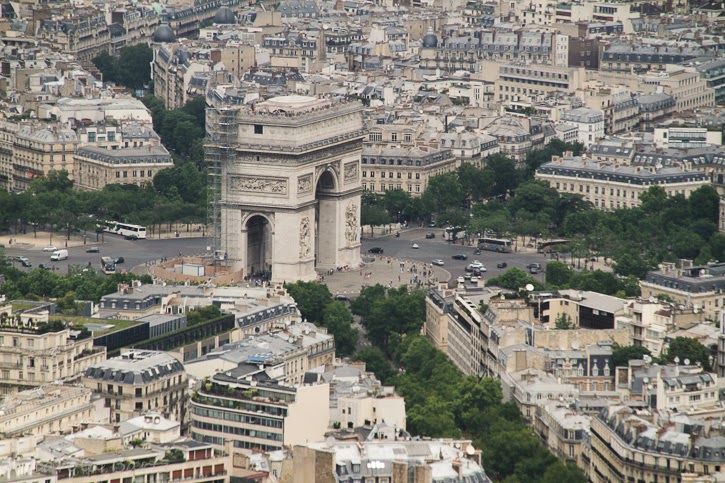 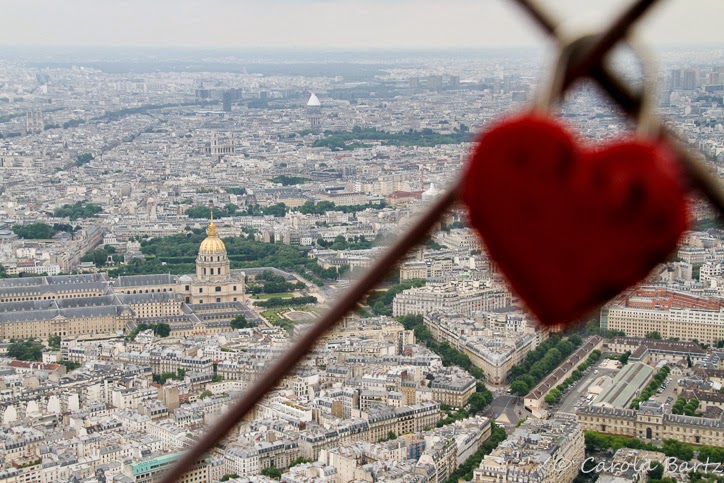 There has to be a heart on this landmark of the City of love! Hôtel National des Invalides and Notre Dame to the very left 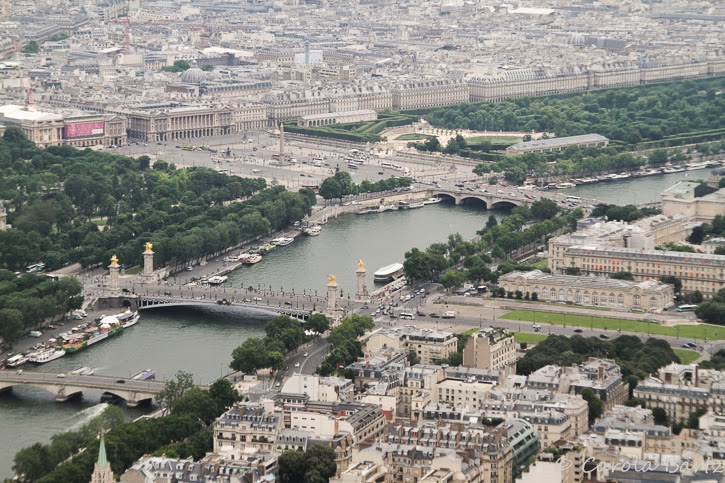 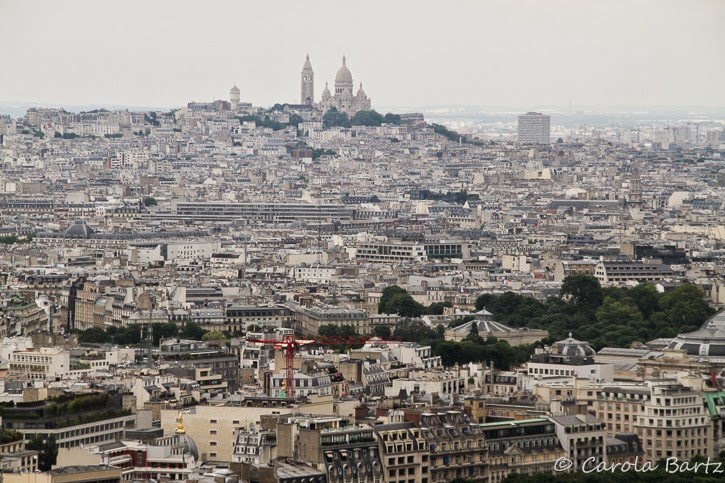 At night the tower is beautifully lit up and clearly visible against the dark sky. Simply unforgettable. 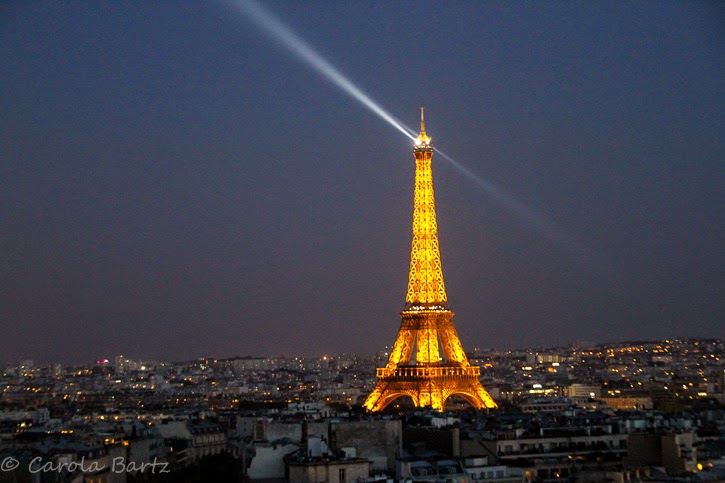 Every full hour at night (until midnight I think) it sparkles for about five minutes - quite spectacular! 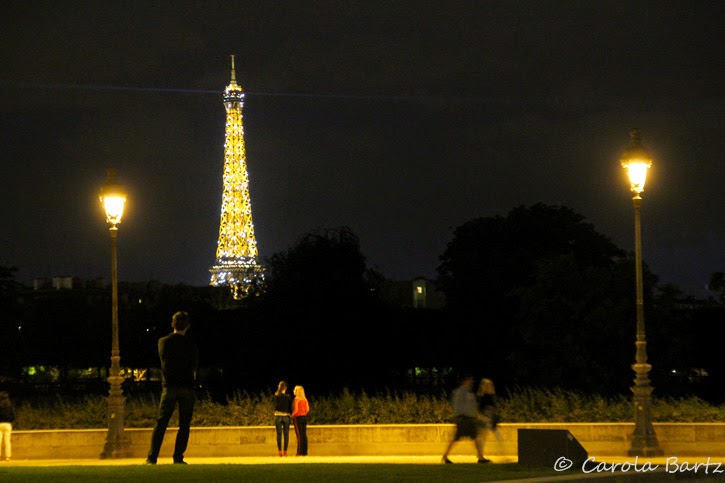 You want a souvenir of the Eiffel Tour? Look no further... in the colors of your national flag or filled with cognac, you can have it all. 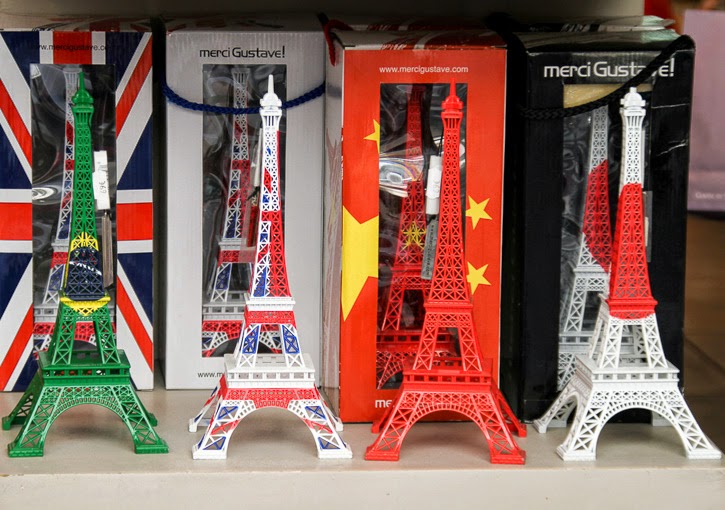 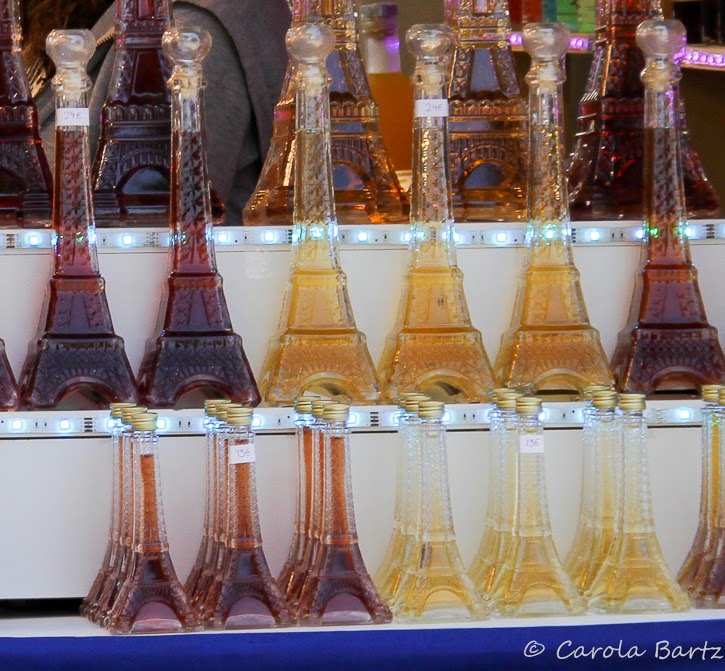 Lovely!!! I especially like the close ups of the detail on the tower!!!

Wonderful photos! I remember time when I was in Paris - at 10 pm I went up in Eiffel tower and at 11 pm I was already down there, on the streets next to the tower, when those beautiful lights started to flash. Stunning! I wish someone would say t me some day - hey, let's go to Paris! I would go for sure! :)
Thanks for reason to get back into these memories (while suddenly I realize my player has started soundtrack from Amelia :) )

Very awesome images, just terrific! Especially love the first one and the heart.

Amazing photographs Carola, reminding me of this summer. I'd go back in a flash...:-)

it really is an amazing piece of architecture and beautiful too.

Awesome shots! I though that the eiffel tower was much more amazing than I had expected. Love Paris!