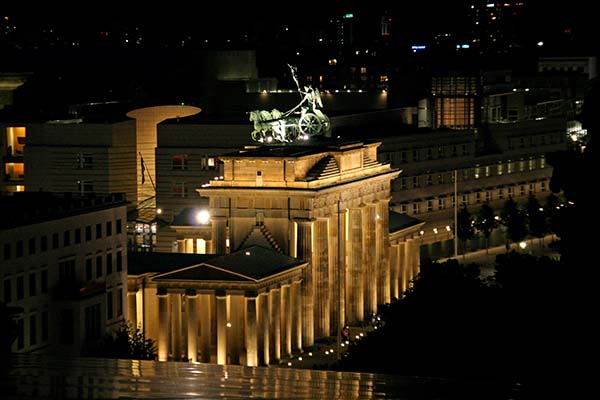 Many of you might recognize this building, a landmark of Berlin - the Brandenburger Tor (Brandenburg Gate). For 28 years many of us could only see it from a distance since it was on the "wrong" side of the Wall. Whenever I was in Berlin I had to go there and look at it while listening to my mother who grew up in Berlin in the 1920's and 30's telling me how she walked through it as a child. I dreamed about following in her steps, but feared it would never happen in my lifetime.
Six months after the Wall came down my dream came true - I walked through Brandenburg Gate! I had goosebumps all over and my heart was racing - no wall, no Vopos (Volkspolizei, the East German police), just FREEDOM !!!
In the summer of 2009 I went again and took my family with me who had never been to Berlin before. Everything had changed - Brandenburg Gate that had appeared so big to me suddenly was ridiculously small among all the new buildings (the gigantic ugly building in the background right next to Brandenburg Gate is the US embassy). I almost cried when I saw it - what had happened to our landmark? And another strange and new experience - I was there with people who had never seen this place while the Wall was still there and couldn't quite understand my emotions.
Then we went through the Gate - and I felt all those goosebumps again.
___
This August marks the 50th anniversary of building the Wall.
If you're interested, come back on 8/13 to read a post about the Berlin Wall.
I am participating in Susannah Conway's The August Break, 2011. Every day during the entire month of August you will find a new photo on this blog, either with or without words. I hope you will enjoy it.
Posted by Carola Bartz at 6:00 AM

Email ThisBlogThis!Share to TwitterShare to FacebookShare to Pinterest
Labels: August Break, Berlin, Germany, Made in Germany

What an amazing post today Carola. It does sometimes make me stop and think about the changes we've lived through in our world. I think it's very hard for most americans to understand what life was really like in Cold War Europe, especially if you haven't traveled and lived in other places. I got a hint of it when we lived in Prague for a month.
Rinda

It is interesting to read your post today. I can well imagine (I think) your emotions about the wall coming down and the changes in Germany since then, because of that. Nothing more important than FREEDOM.

My connections to Germany are through two sets of inlaws. My first husband's parents who were Jewish were born in Berlin. They immigrated to Israel in the 1920's and started the building of that state!
My second husband's mother (not Jewish) was also born in Berlin. She met and married an American soldier at the end of WWII and my husband was a result of that union. Germany's always been a difficult country for me to embrace because of what happened there and everywhere in WWII.
But I loved all my inlaws; and my husband of course! Lots of emotions to grapple with...lots.

Oh as you know, I'mnot German Carola, but I'm an Army child who revelled in Berlin and it's amazing life. My reaction was similar to your when DD and I visited in Winter 2009 for the markets...a shadowed Brandenburger Tor and a silly ice game at Potsdamer Platz. And then DD reminded me that it was breathtaking to see the changes and the sights for real.and she mad me realise the beautiful architecture will be enough. Great post!

Is it only 50 years since they built the wall? I'd have thought it was longer, but I was a teenager, so time meant little to me then.
My young brother worked in Germany in 1993. The wall was down but East and West Berlin were still quite different from one another. He worked in one, lived in the other, and commuted by bus.
I can certainly understand you having goosebumps on going through the Brandenburg Gate, such a powerful symbol of German history.
— K

It seems like just yesterday that the wall came down. What a wonderful image. And - I love the 'August break' project. What a great idea!!

I got goosebumps reading your post.....revisiting places where there is family history can be so emotional....thanks for sharing.

I'm old enough to remember watching this unfold on television. Even then, I felt something wonderful was happening.

Loved this post, Carola. And the photo is inspiring. :)

what a great night photo Carola

Wonderful to read your perspective ... and I understand the goosebumps. My DS remembers me getting him out of bed to come and watch the news unfolding on TV the night the wall started to come down, and my telling him: "Remember this: this is history in the making." He has always been glad: especially since he married a young woman from Germany and now lives there!