Carmen of Tails of a Biomouse chose the word for this week, "gypsy". 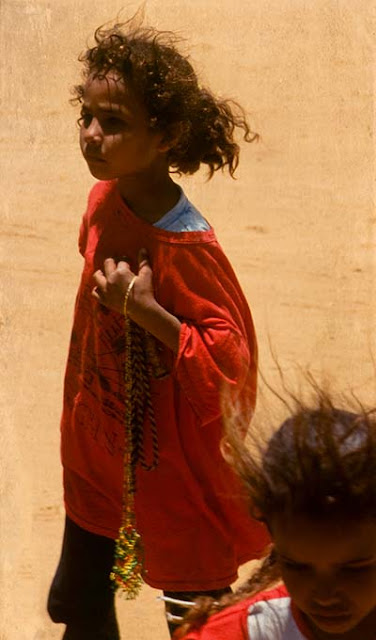 The very first thing that came to my mind was the song "Gypsy" by Fleetwood Mac, written by Stevie Nicks. I could hear her smokey, sometimes almost hoarse voice that I love so much, singing those beautiful lyrics, "to the gypsy that remains faces freedom with a little fear".

To the gypsy that is within all of us, often hidden away.

Somehow, gypsies belong to my childhood. The Roma people, who used to tour around the country in their trailers, making camp for a few days at the edge of a town, observed from the distance by the "decent" people, not welcomed, and finally seen with relief how they were leaving the area again. Whatever happened during that time - a break in, a car that disappeared from the street, stolen bicycles - was blamed on the gypsies. No one who talked about them had anything good to say.

They hold a big fascination for me. I tried to imagine their lives, envied their kids who did not have to go to school but could run around barefoot. I envied them for living in a trailer instead of a third floor apartment. In my eyes they were wild, free and had no worries. Their life was colorful and adventurous whereas mine was just plain boring.

Later, they disappeared more and more. Only seldom did a group of Roma make camp anymore.

I found them again in the book "Chocolat" by Joanne Harris. The theme of homelessness and traveling took stage in the movie "La Strada" by Federico Fellini, a movie that deeply touched me.

And then I found them again on another continent - the Bedouins in Egypt. They lived in tents in the desert. They had no steady home. They were curious. They were friendly. They offered us tea. They tried to sell their handmade jewelry, a meagre way to make some money.

I felt the same fascination as I did when I was a child. 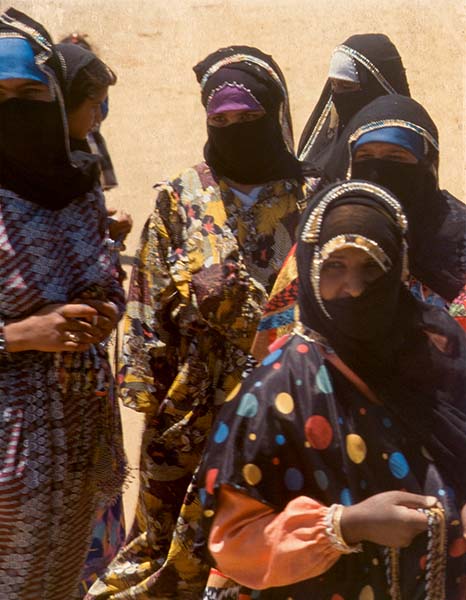 I forgot that I have also visited a Bedouin village in Egypt. I loved watching them weaving! It was a very interesting place.

Interesting topic Carola, you still see them around here, in Italy. The same thing - the camper caravans come around and park in a place for a few days. None of the Italians I know has anything nice to say about them. I know I've learned to recognize them in the streets too - the women have a specific dress and way they wear their hair.

Yes - I can see how you would associate this with gypsy. What wonderful colors!

What excitement! What thrills to imagine running with the gyspies!
I do believe I saw the Bedouins in Israel in the Negev/desert land to the south.
Why does a group of people always have to be the lesser to other groups of humanity? I'd like to think we've learned by now...even the homeless, other downtrodden groups need our attention and caring...even the gypsies!
As usual your photos are all wonderful to see and enjoy.

Thanks for this interesting photo trip amoungst the Gypsys. I was never exposed to any. Happy Mother's Day, my friend.

What an interesting post and it is true, people never seem to be happy having gypsies near by, it is as if they should be ringing a bell and shouting "Unclean! Unclean!"

Hey Carola, I've always had a soft spot for this word and all that goes with it. Great post!

Hello Carola, thanks for stopping by my blog - I must say I NEVER tire of the photo in your header on the blog - it is fabulous and makes me want to take out my old 35mm and learn how to use it ;-) I am never happy with the photos on my digital point and shoot camera. I'm sending you hugs as I am sure you too are missing your mom. Enjoy your weekend and I'll see you soon !!

Wherever 'travellers' try to settle in the UK they are pushed out by the 'anstaendige' people, as you say.
Gypsies have been persecuted for as long as they have been around.

Funny - since Glee featured Fleetwood Mac songs last week, I got out some of my old albums and they are still on the table - one of my absolute favorite groups from the 70's! Interesting about the Gypsies - they always seemed more mythical than real to me, but I am reading 100 Years of Solitude and learning more about them. Thanks for sharing!

thanks for reminding me of Stevie Nicks music... Gypsies ARE very intriguing!! love your pics of gypsies!! as well as your stories!

Dear Carola-I just LOVE these gypsy pics and guess what...I feel I was a gypsy in some past life!!! I love their carefree, soul-FULL existence too. I hope you had a fantastic Mothers' Day...with lots of love and hugs and everything that makes you happy! thanks so much for stopping by my blog to wish me:)

enjoyed reading this. as a nomad in essence, i relate to it all.

What beautiful pictures of such colorful and delightful people with their own amazing traditions and garb. I loved your post this week (the gypsy word experience I was trying to eek out for myself was so masterfully done by everyone who played, I felt extremely satisfied mentally!)I also thought of Stevie Nicks song and the movie Chocolat (I haven't read the book, but it's on my list) and I'm terribly jealous of your travels. So glad you played this week!!