My free time during this rather crazy week was mainly spent at the lake, watching the owls. Therefore, I didn't work a lot in the studio - but I finished the canvas that I had started last week. It's the girl who loved dogs. 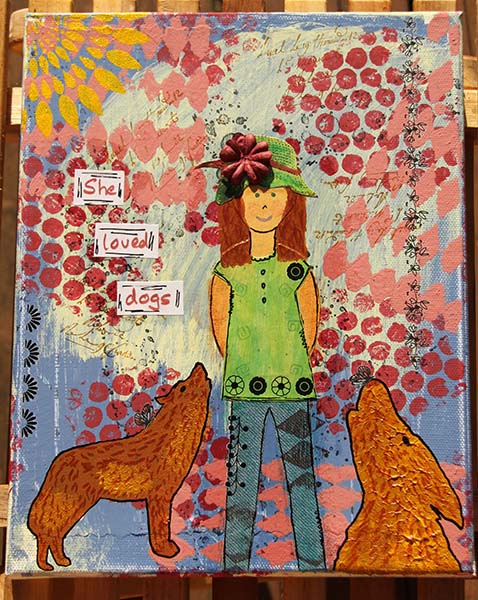 Since I can't paint dogs, I used two of my (coyote) stamps, stamped the image, made a template and played around with some heavy body acrylics. I really love the texture of the paint in the dogs, especially the right one. I wasn't happy with the girl for quite some time - until I got the idea to put a hat on her head (cut from the stamped image of a Paperbag Studio stamp) and removed her eyebrows which had given her quite an angry look. She looks much nicer now I think.

I link this to Paint Party Friday - rather late, but it's still Friday! There are so many more highly talented artists to visit.

Update on the owls: The Bird Rescue Center called the ranger to let him know that the little owlet who fell out of the nest had eaten three mice (yummy) and is doing well. Its sibling was very high in the tree today, still close to Mom. Today I went to see them in the evening and there was a lot of hooting going on from the dad. All three owls looked well. The owlet is pretty daring, there were some close calls, and I just hope it stays up there in the tree and doesn't follow the way of its sibling. 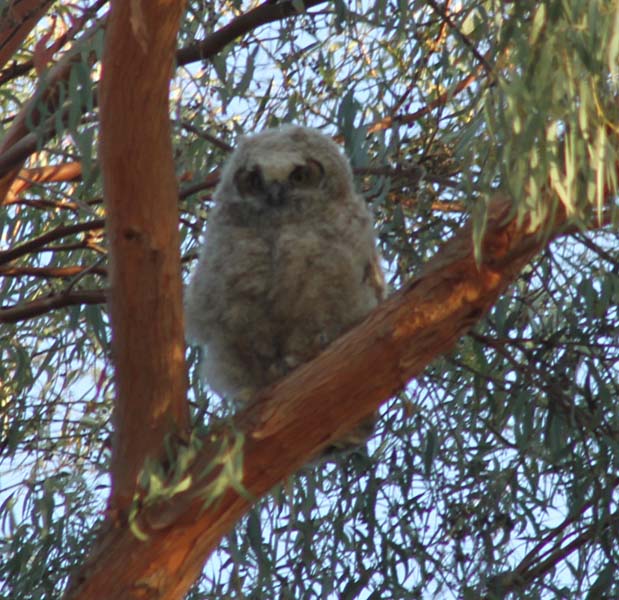 If you want to read more about the owls, it's in the posts below.
Posted by Carola Bartz at 9:57 PM

Wow, you made it too, wasn't sure I'd get here to PPF today, love yore girl, so happy & great to find out the owls are doing well :) Have a great weekend!

Terrific collage Carola and so loving all the great texture. Annette x

ooh that owl story is just riveting, glad the free base jumper is doing okay... and I can't believe if you drew that girl you couldn't draw dogs at least as well as the stamped image...really you shouldn't say you can't till you try, and once you try you'll find you can...

How sweet. I like the texture you have created within this piece! what a sweet owl too. glad they are safe, and yes, i hope he doesn't fall out of the tree! happy PPF

You made it in! I like this smiling girl, it's just a happy image. And it sounds like you've made really good use of your week. Relaxing and watching the owls sounds perfect to me!

I'm surprised you didn't do an owl painting with all that drama and inspiration!

Lovely girl and her coyotes!!

I know it wouldn't be a good idea, but I just want to hug and cuddle that remaining owlet. I hope it's getting as many mice as its sibling!
"The Girl Who Loved Dogs" is wonderful! I agree about the texture you used for the dog on the right. Great!
— K

Wow! The last ppf post I went to had geese on top of her house and she could hear the "honk, honk" of them and now this beautiful owl. What a beauty. Hoot, hoot.:) Love your painting and what a great idea about stamping the dogs. I don't know how to draw dogs well either so that is a good idea. Great job. Happy PPF!

Very cute! I'll bet you could paint a dog, if you tried.

I love this post. First of all.
I am a girl who loves dogs so I can relate to the girl in your painting.
I love how you "dressed" her in artsy painted jeans and a cool green tunic.
And my love of owls has me stalking your blog for more photos.
You are so lucky to be a witness to the growing family.
Have a wonderful Mother's Day.

Love the mixed media art. you do it so well.

That hat is so cute! Love her flower. Wonderful textures around the whole piece, pretty girl with great dogs.

The finished product turned out very nicely. Interesting about the owls.

Oh wow, Carola! She came out so cute! I love her sweet face. I knew you'd get the dogs right. It doesn't matter what your techniques are, it's the end result that counts. Happy PPF, late. :-)

Your girl is just darling; love the hat and the sweet expression. Love that little owl! Owls are about my fav bird. Happy PPF!

She is very cute. I love her jeans too!!! the dogs are furry and came out well.

Love the owl shots. Happy ending to the story about the recued owlet. glad to hear it. Keep us posted on them all please. Wonderful photos as usual!! ;-))