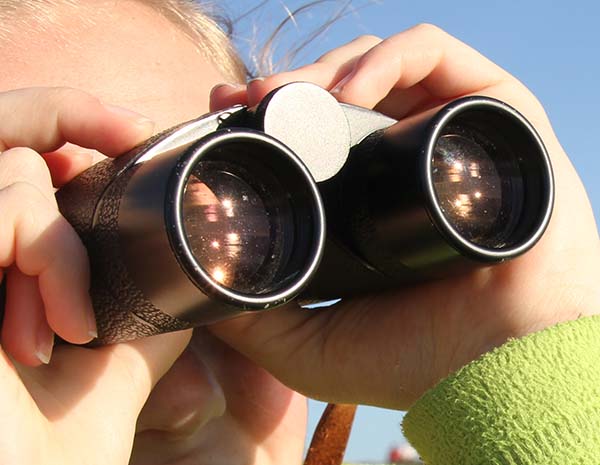 Today we went to Bodega Head, hoping to see some whales. There were days when we never saw any whales and other days when we saw many. Today falls in the second category.

So this is the middle of January - I remember this to be winter - right at the Pacific Ocean. It is supposed to be cold and very windy. Instead, the sun is shining and there is almost no wind. Unbelievable... 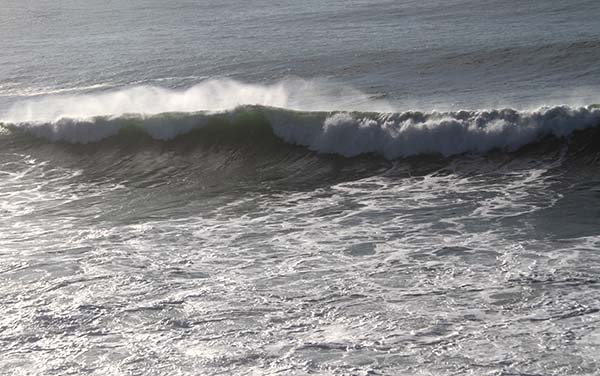 I spent some time taking pictures of the waves that thunder against the rocks at the shore. I love the mist that hovers above the waves before they break. Seagulls were sitting on a huge rock right in front of me, others were noisily flying around. 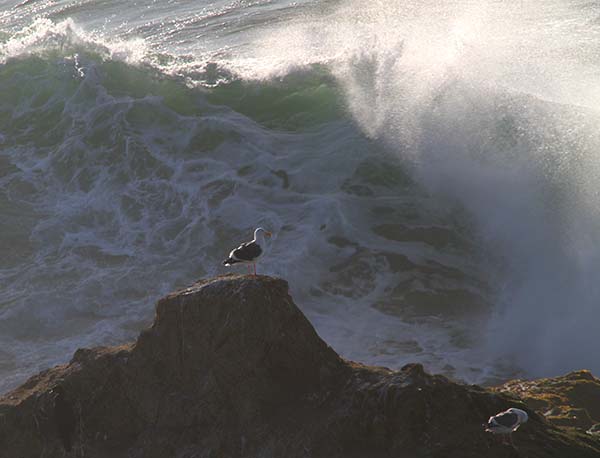 Apart from the waves at the shore, the ocean was like a blanket which made watching for whales super easy. You just watch for spouts - when you've discovered one, you focus in with your binoculars and actually see real whales.

About two miles out there was an entire pod of whales, very likely humpbacks, playing around. A little bit further south we discovered another big whale who traveled south - probably a gray whale. 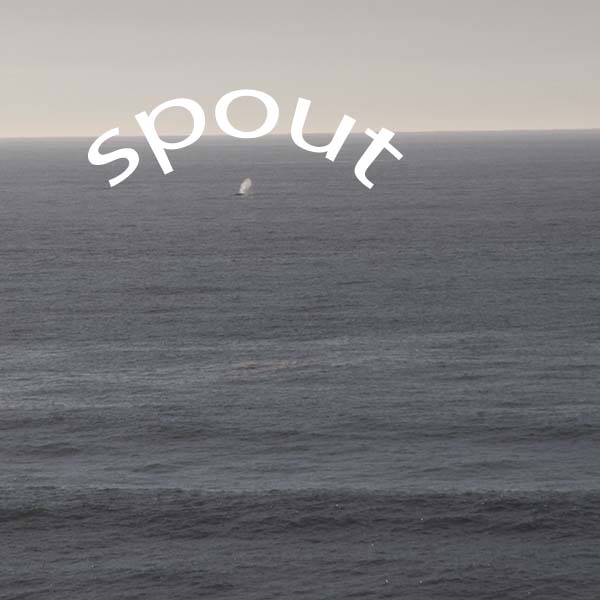 If you look really hard you can see the back of the whale
Everybody - there was quite a crowd - was excited, either looking through their binoculars or taking pictures. 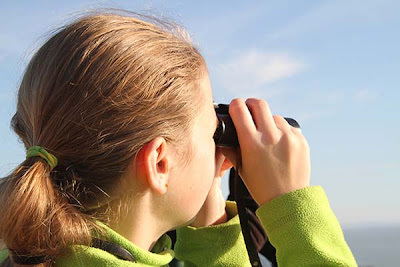 Kaefer and the Geek 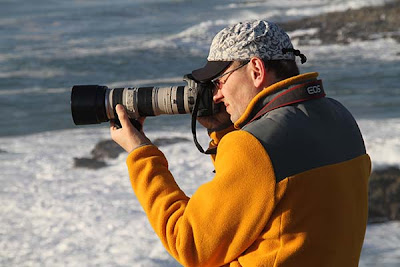 The whale watching volunteers who are at Bodega Head every weekend from January through April (whale migration time) and sometimes even during the week if there are many whales, were happy to tell everyone about the whales and answer any question that would arise. They had some interesting stuff on their display table, like this vertebrae of a juvenile gray whale. 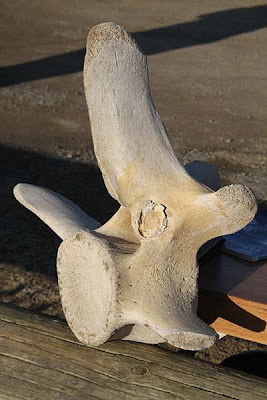 And even without looking for whales, it was just a gorgeous day. 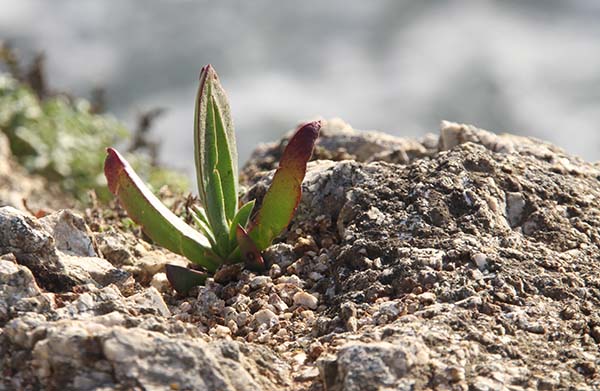 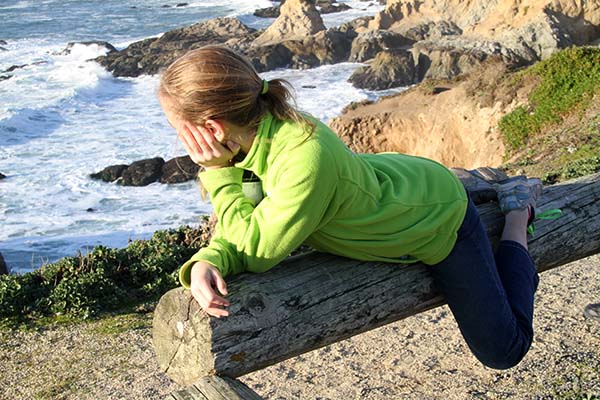 Afterwards we went to the "Sandpiper" in Bodega Bay, our favorite restaurant there. Tonight I opted for the Fisherman's Crab Stew - messy but oh so yummy... 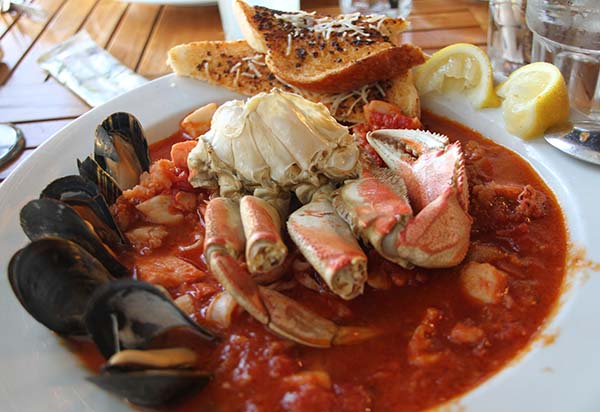 As you can see I already nibbled a bit before I remembered to take a picture...
So how did you spend your Sunday?
Posted by Carola Bartz at 8:39 PM

Some of our best days on the Oregon Coast have been in the winter - warm and no wind like you describe. You are so lucky to have seen a whale! I can't tell you how many times we've gone and seen nothing. :)

I spent my Sunday visiting Lake Garda - come by and visit with me!

While you are having unseasonably warm temps..we are in the deep freeze. Your images from your whale watch are wonderful..and inspiring. Sounds like fun!

Looks like you had a really great time! :) I stayed home all day - too cold outside!

This is absolutely our favorite place to go! I have taken so many photos from that exact spot. We even saw some spouts ourselves last time. We usually stop at the Tides Inn for clam chowder and loaves of sour dough bread and drive up to the headlands right where you were and sit and eat over looking THAT VIEW!!!!
Where is the sandpiper? Never been. That stew looks awesome, must go there and try that!
This weekend I stayed home and played cards with my brother. Spite and Malice.
We obviously are nearly neighbors!!!!

The only times I've been whale watching was in the San Diego area and both times it was on a boat. This is one fun time, isn't it. I love it when the tail comes out of the water and sort of leaves a "footprint" when it goes back in the water. You have some very stunning photos of the day and the outing.

Bodega Bay is one of my favorite beach places. I spent Sunday in the mountains tho. Hasn't our No. CA weather been glorious?