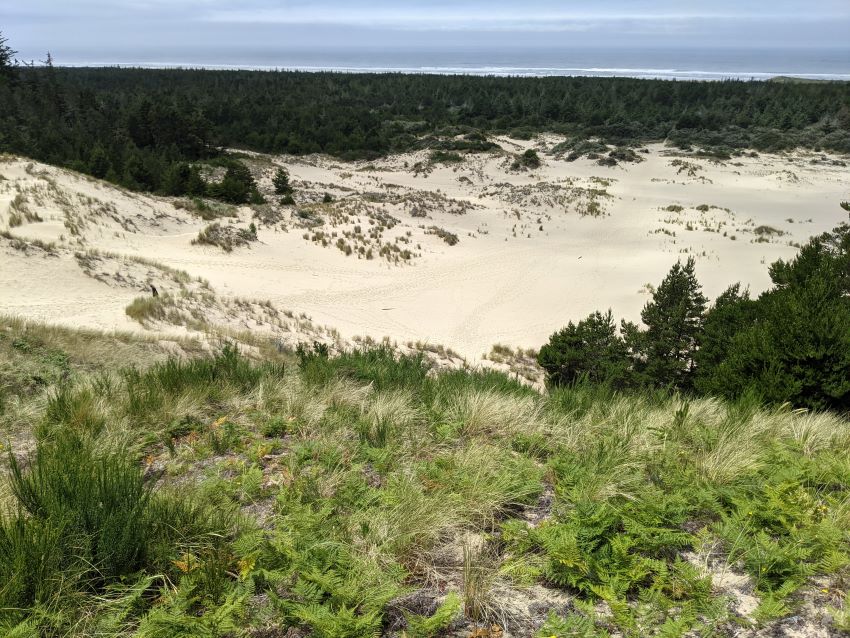 Last week we spent a short vacation on the Oregon Coast. It was during the same time that Portland - in the very same state - was sweltering in temperatures above 110F. On the coast, however, it barely got above 70F which is way more to my liking.

One day we visited the Oregon Dunes, the largest expanse of coastal sand dunes in North America. They extend for 40 miles along the Oregon coast between Florence in the North and Coos Bay in the South. The wind sculpted dunes tower almost 500 feet above the ocean shore and blend with rivers, lakes and temperate rainforests, creating a remarkably diverse ecosystem. 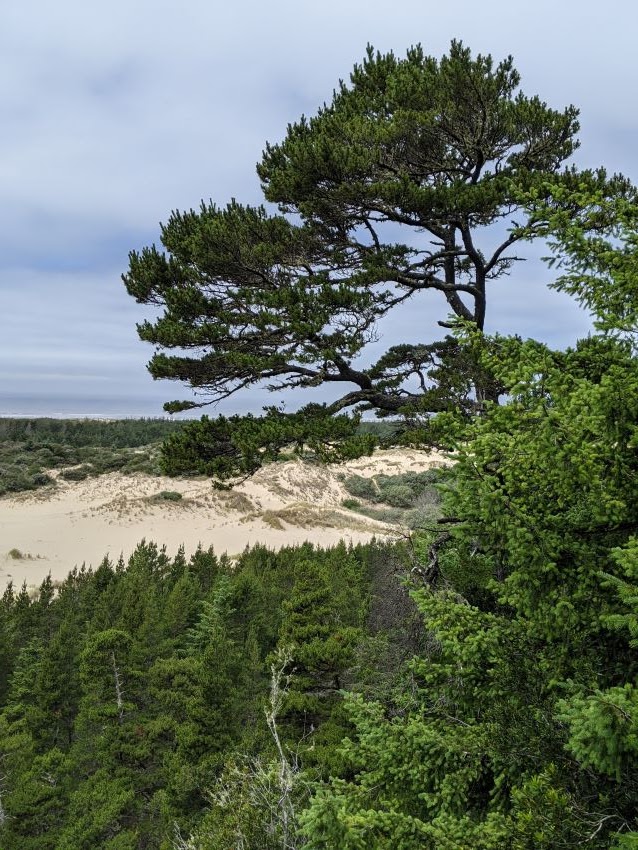 This was our fourth or fifth visit to the Dunes. Several years ago we had camped in the Dunes twice and spent happy times at the seemingly endless beach. This time we decided to take a hike in the Dunes and we opted for the Oregon Dunes Trail which is a 4.5 miles roundtrip. 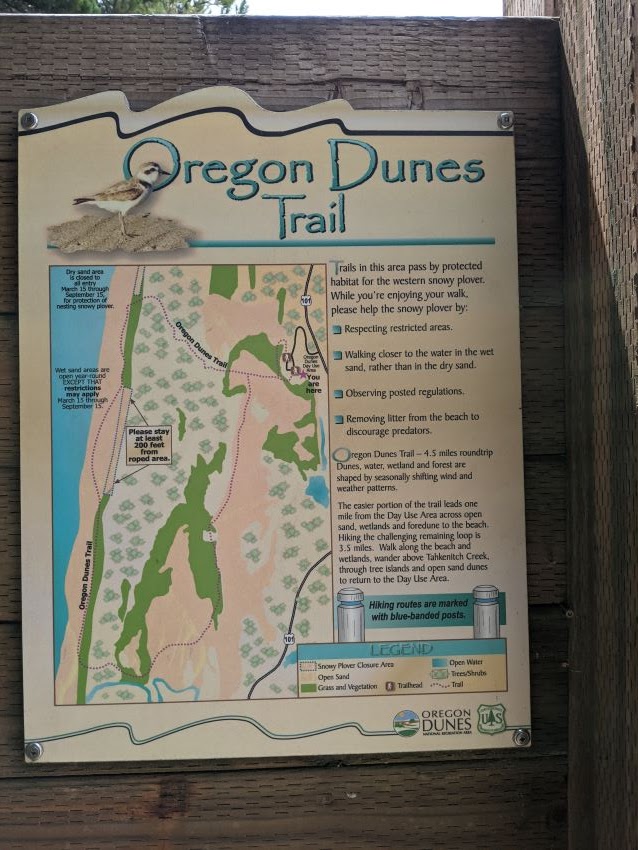 The word that stood out to me was "challenging" and after a short discussion we decided to hike the challenging part of 3.5 miles first, therefore doing the entire loop in reverse.

I can't stress enough how glad we both were about this decision. 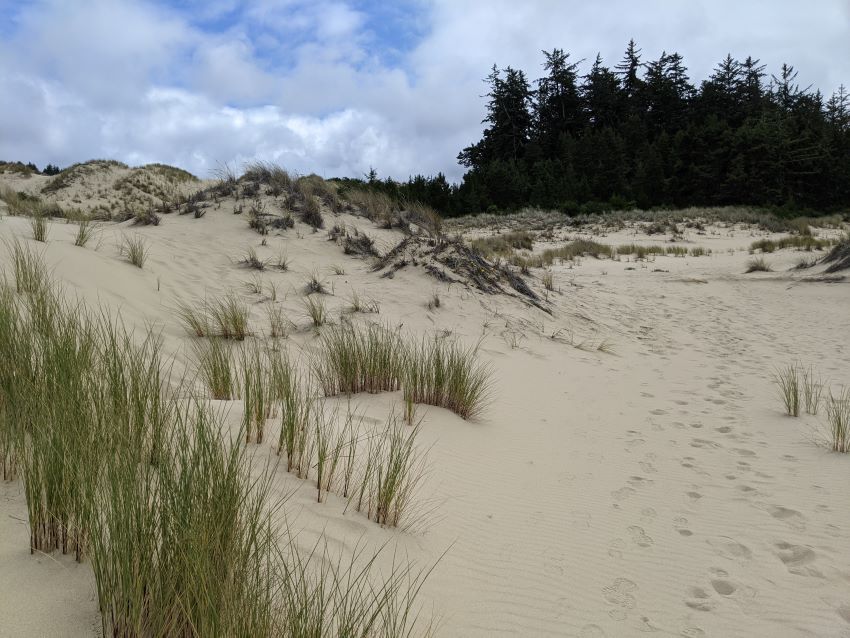 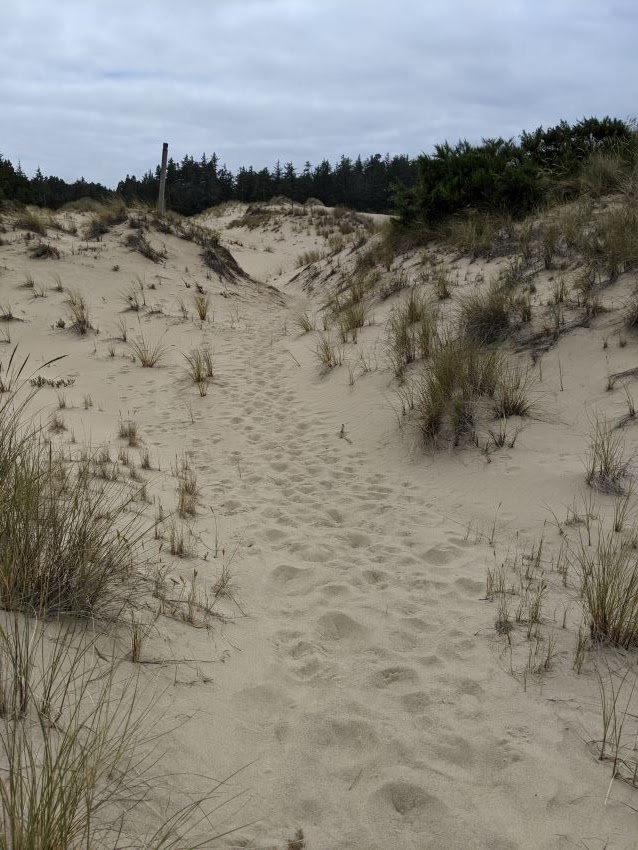 You might have noticed that the trail leads through "open sand". Not only is this sand open, but it's dry and loose - anybody who ever walked through sand dunes knows how difficult this kind of walking is. On the smallest incline it's two steps forward, one step backward - very slow progress. I was sweating soon even though the sky was overcast and temperatures were very moderate.

Can you imagine how relieved I was when we reached this part of the trail? 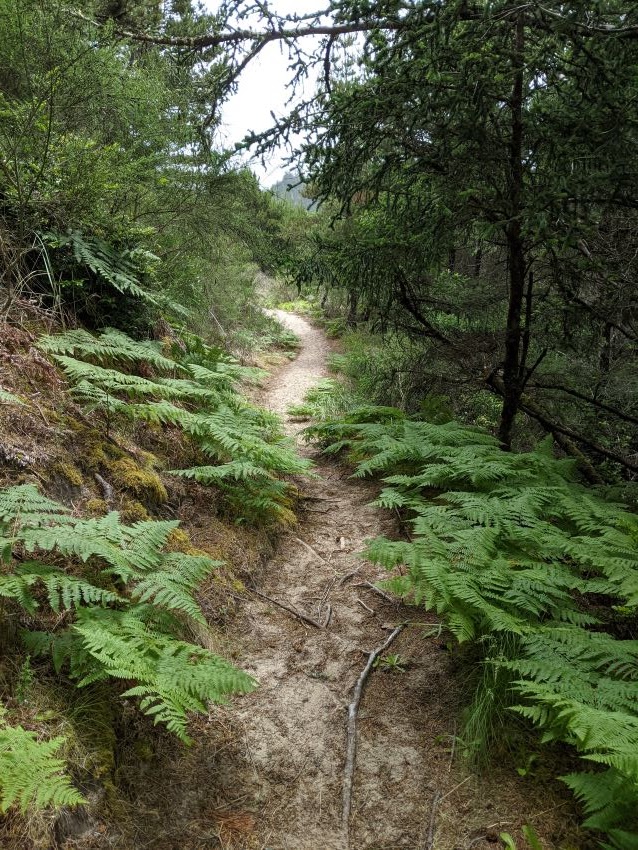 Alas, my relief was only short-lived! This was one of the tree islands and after only a few hundred yards we were out in the open sand dunes again.

Despite the difficulty of the walking, we appreciated the beauty around us. 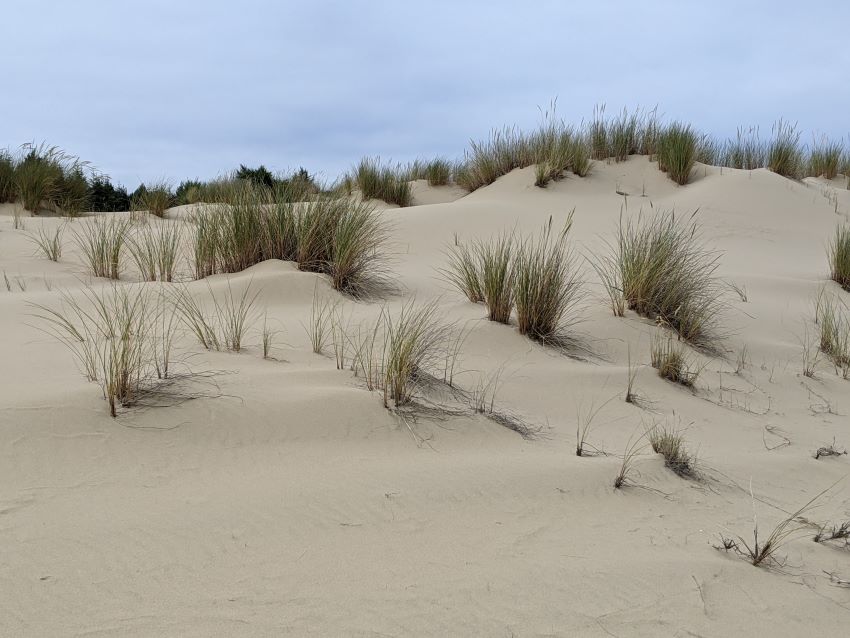 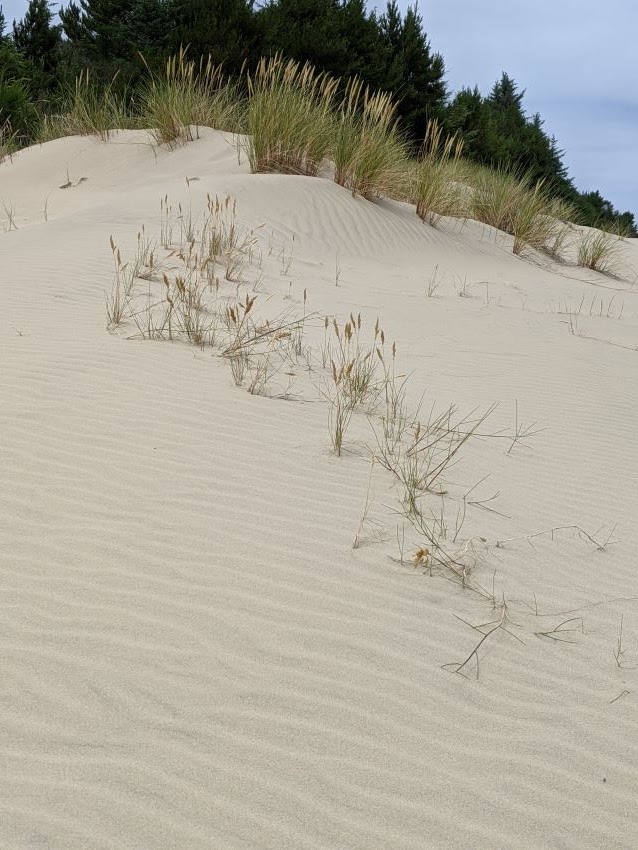 Here I am laboring through the dunes, but despite the sweating I was in a good mood. You can see my shirt getting wet with sweat. I eventually pulled it off and walked just in my tank top - I spare you a picture of that. 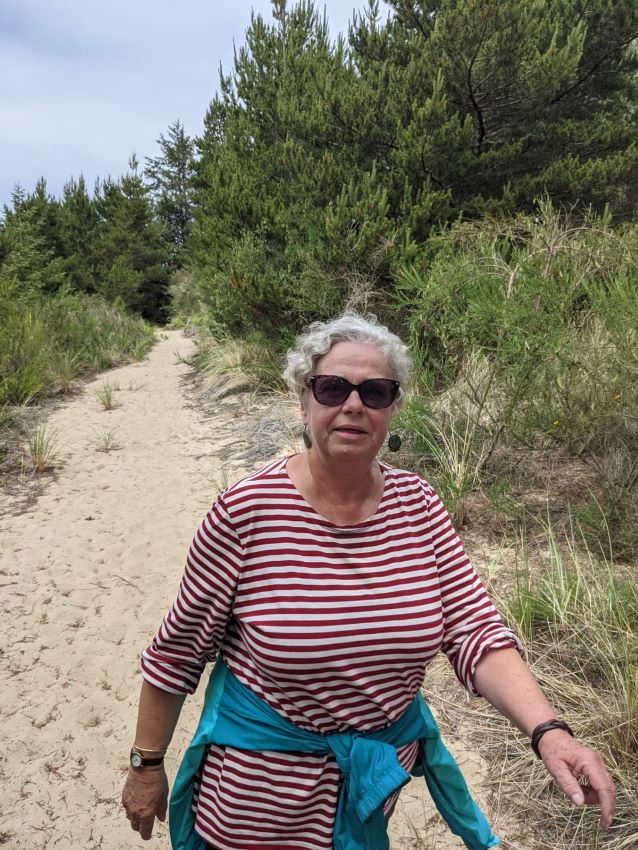 We finally reached the creek and after that we could enter the coolness and much easier walking in the wetlands. 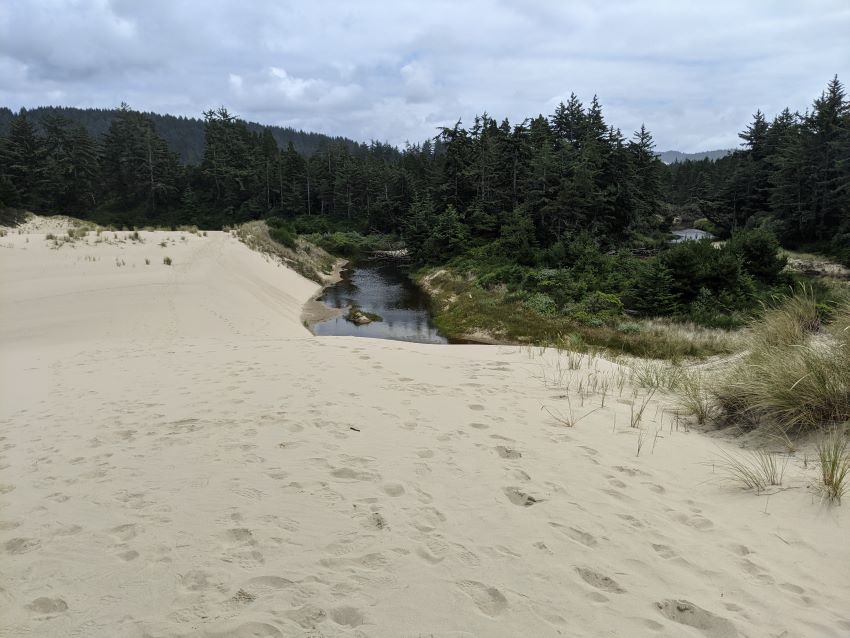 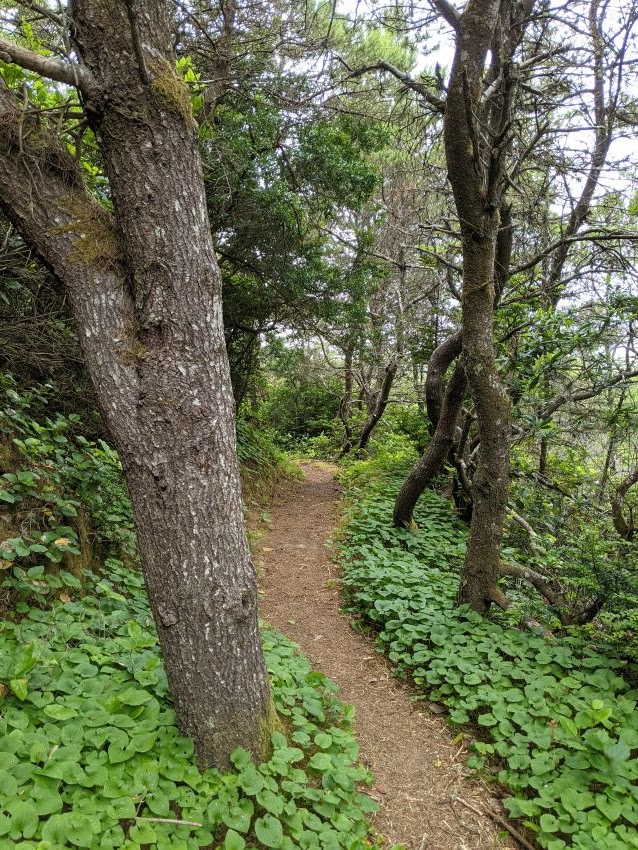 At last - the beach! The sandier parts of the beach were roped off since it was nesting and breeding season of the Western Snowy Plover. This shore bird is threatened with extinction since the dry, open sand along the beach, that it needs to survive, is being more and more invaded by the European beachgrass that was planted in the early 1900s to stabilize sandy coastlines. Every year from March 15 to September 15 these areas are roped off so that nobody walks through the birds' sandy nests.

So we hiked along the wet sand which is much easier to walk on anyway. We hardly saw anybody, but we did watch these surfbirds that flew fast and furious over the waves in big flocks. In the retreating surf I found a beautiful big seashell (it's about 3 x 3 inches). 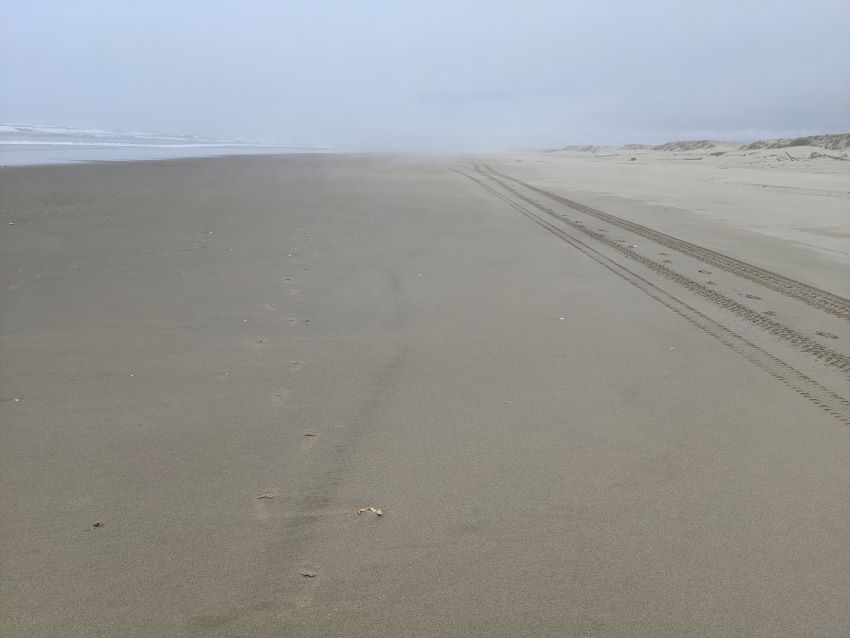 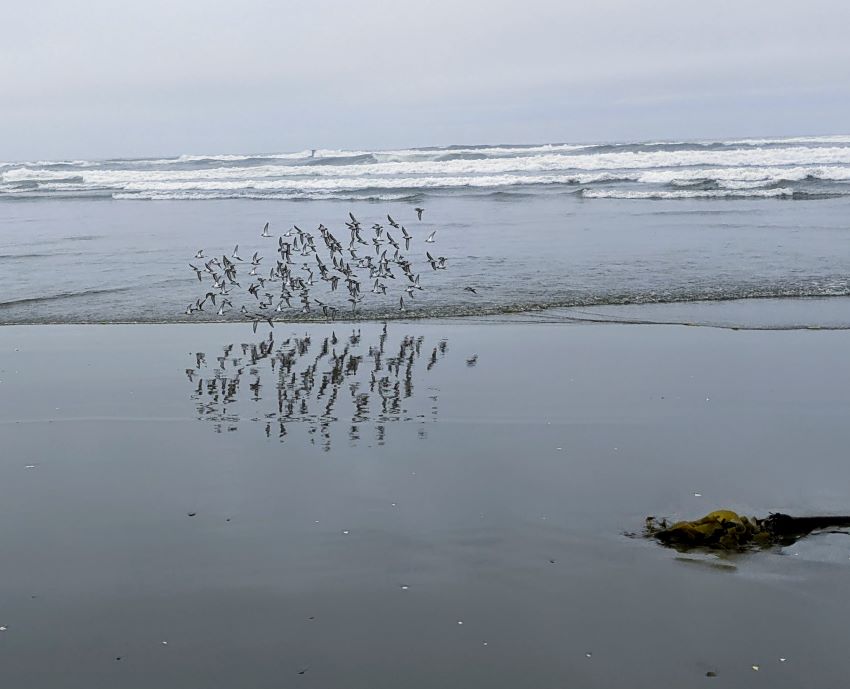 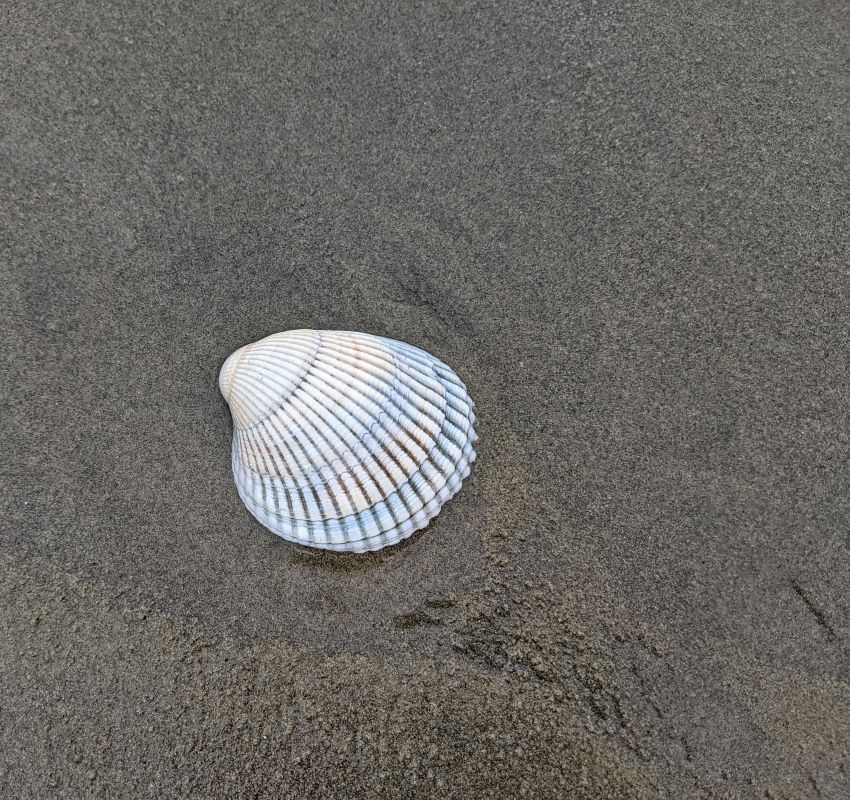 After about a mile we found the trail back to the parking lot. It was a longer portion through the wetlands and we saw lots of huckleberry plants. Finally we saw the big dune again from where we had started 2 1/2 hours before. We were exhausted, grateful that we had done the challenging portion of the trail at the beginning of our hike and a little bit proud that we actually did the entire trail despite its difficulties (we were the only hikers along the challenging 3.5 miles). 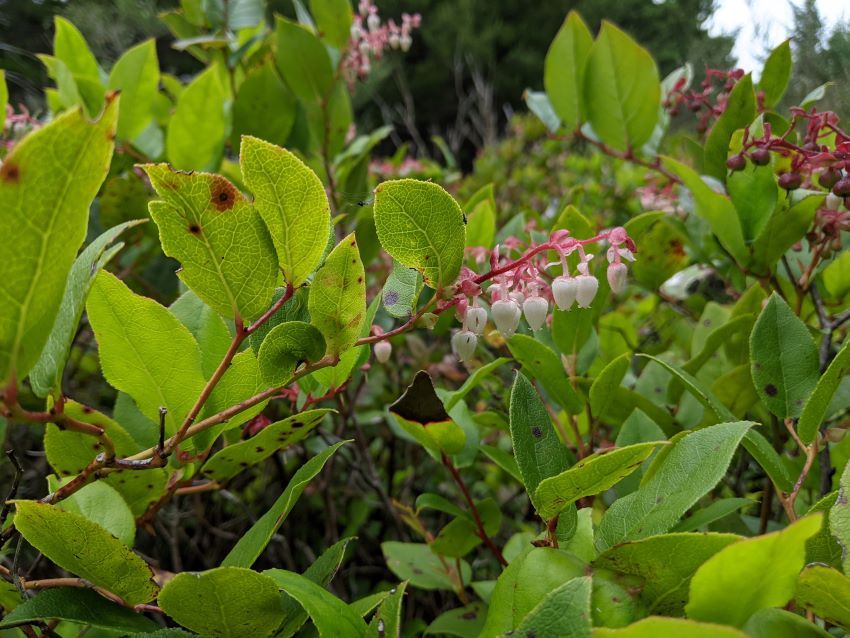 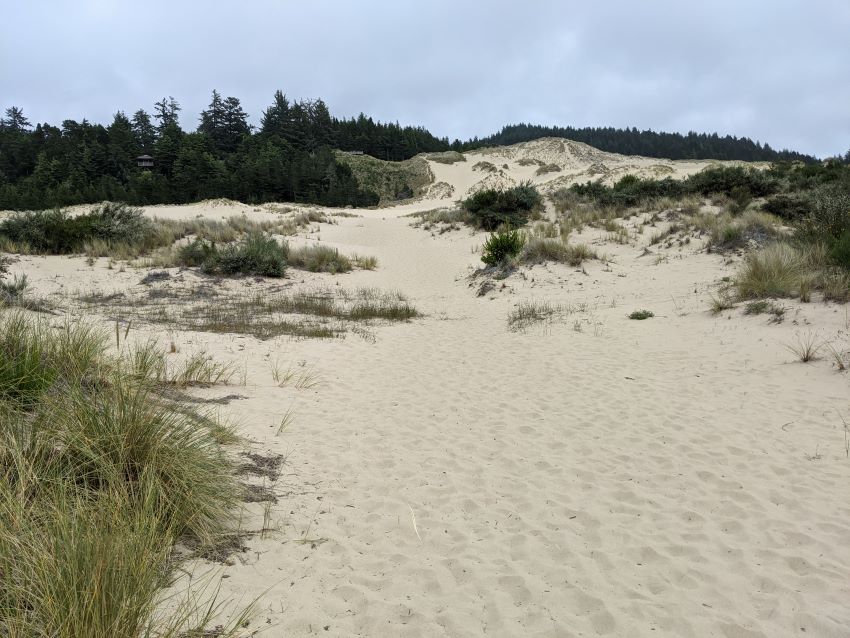 Fortunately I had a cotton sweater in the car so I could get rid of my wet clothes. We drove further North to Florence to the Beachcombers Pub for a very late lunch (or early dinner). Oh that glass of Hefeweizen was so delicious! 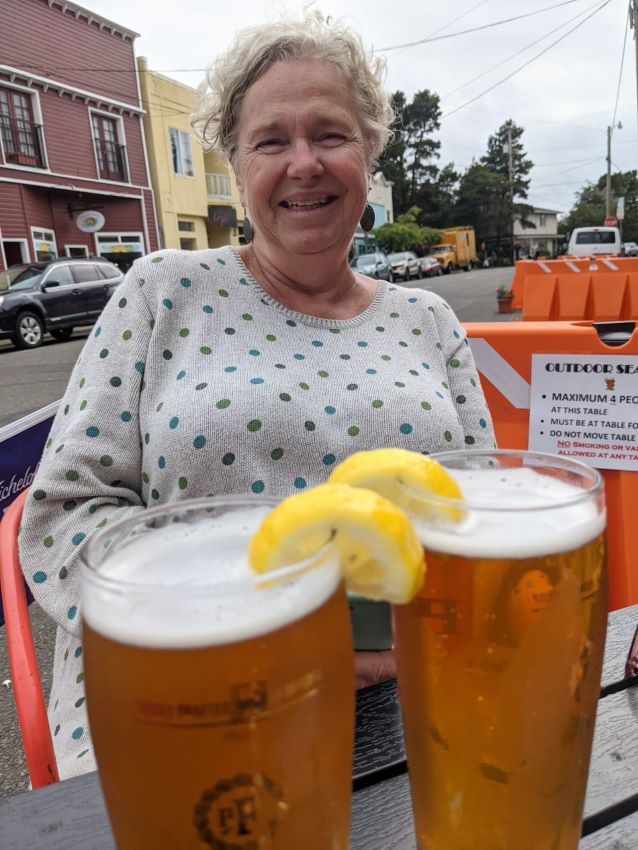 It looks incredibly challenging - and very beautiful. I doubt I could do it - but am so glad you shared some of the beauty.
And a big yes to 70 degree (rather than 110 degree) days.

Ohhhh, so beautiful - and one can see you enjoyed it, too!

Uh, Hefeweizen ... nothing for me. We have Märzen, a local, yummy beer. That, or an ale or water.

Beautiful, fun post.
Not in the mood for traveling here... glad I can with you!

What a great Hike you had. I know how hard it is to walk through lose sand, respect! Lovely to see the photos of you, too. I can imagine how good your beer tasted after the strenuous walking! Hugs, Valerie

What a beautiful hike! I'm sure glad you weren't in the sweltering temps, but still one challenge hike there! Looks like you ended the day perfectly too. :)

Walking sand dunes is a bit difficult, but what beautiful scenery. I've been to Oregon twice but never to the dunes, will be putting them on my to visit list. It looks like a great trip and a hard work but beautiful hike. hugs-Erika

Beautiful photos! I love walking the beach though walking in soft sand is hard work! Our dunes aren't nearly as large and it's not always safe to walk among them - mosquitoes and rattlesnakes - both unpleasant.

Oh Carola, this looks so dry and hot, I think because it has been in the 100's the last couple of days. The photos of the sand dunes are very pretty, and glad you got a chance to hike on the trail. And I got to see a picture of You! It's nice to see our blog friend's faces once in awhile. That seashell is beautiful. Would have taken that one home with me. I bet that beer tasted great after a long day of walking on the sand dunes.

A temperature that barely got above 70F is more to my liking to!

Your photographs are lovely, your hike sounds quite tough though.
I'm sure that glass of beer tasted wonderful, great photograph of you.

Looks like a challenging hike! Love the fabulous photos.

How utterly beautiful. Proud of you!

Walking through sand of any type can be difficult and you surely deserved that glass of Hefeweizen, Carola. I know what you mean about going a few steps forward and then a couple backwards. Thanks for taking the challenge trail and taking us along, even if you did the hard part. Also glad that the temps were below the ones I have been reading about in other parts of Oregon and CA too.

Wow, good for you! You look great in both pictures! I would love to go, but I don't know if I could make the hike! LOL! Truly breath taking! I would love a beer too! LOL! Big Hugs!