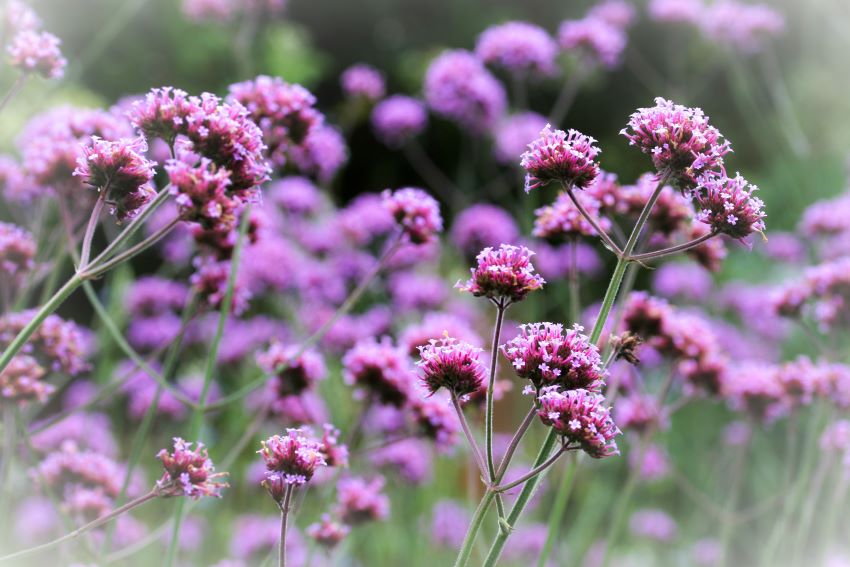 The plant in the photo above - Verbena bonariensis - is a tough work horse in the flower garden - beautiful, colorful and very drought tolerant. This is exactly what we need here in Northern California if we want to have beautiful gardens while saving water at the same time.

This year saving water is more important and urgent than ever. We are in an exceptional drought - "exceptional" being the most severe level of drought. Our last drought ended a couple years back with record rain falls, one "atmospheric river" chasing another. That drought "only" was labled as "severe".  But now we are in the "exceptional" stage and I'm wondering why our county supervisors and city council members aren't demanding mandatory restrictions. It's not like this situation is going to change to the better anytime soon since there won't be any significant rainfall before November (if even then). 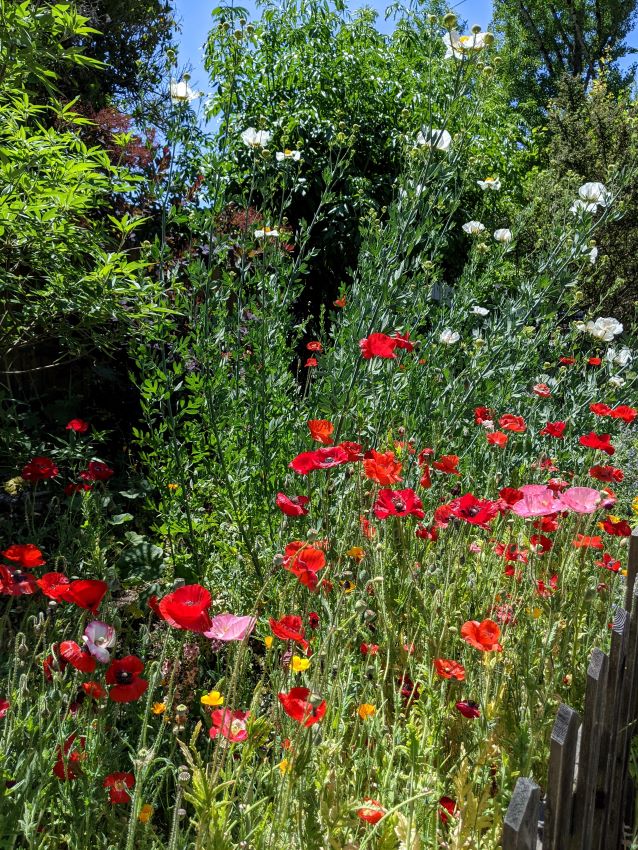 We get most of our rainfall in the winter. Our 30-year annual average is 34 inches; this year, however, we only received 12.86 inches which is 39% of the average. Our main reservoir, Lake Sonoma, is at 56.5% of capacity.

For now, residents are asked to restrict their water use voluntarily by 20%. I'm pretty sure with summer not even having started, those restrictios will eventually become mandatory.

Our household uses 2000 gallons of water on average in a month. In the summer it can reach 3000 gallons and very seldom even 4000. With these numbers we are far below the average of a "normal" household and it's getting harder and harder to save additional water since we are already pretty water savvy.

These guys are my best friends when it comes to saving water: 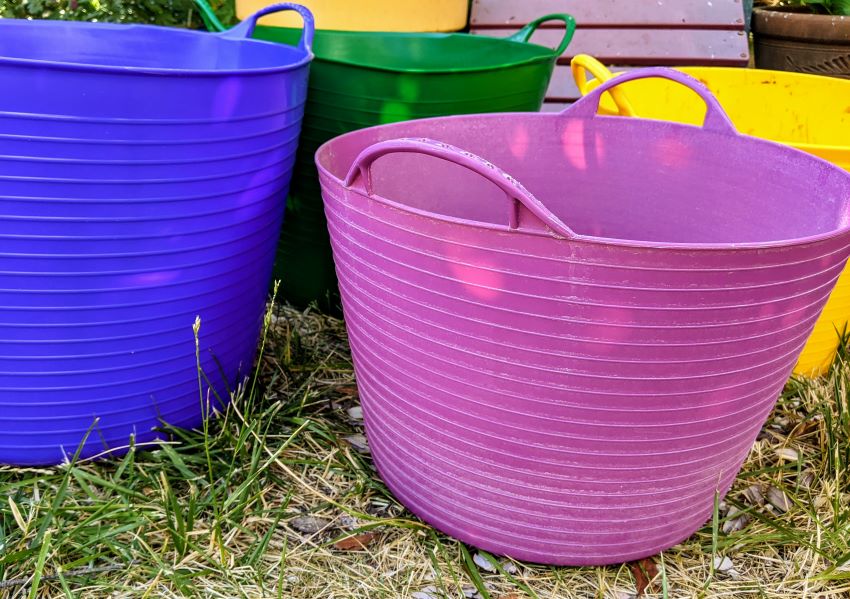 We use flexitubs everywhere in the garden, but their main purpose is catching the water in the shower while it heats up (of course we have low water fixtures). 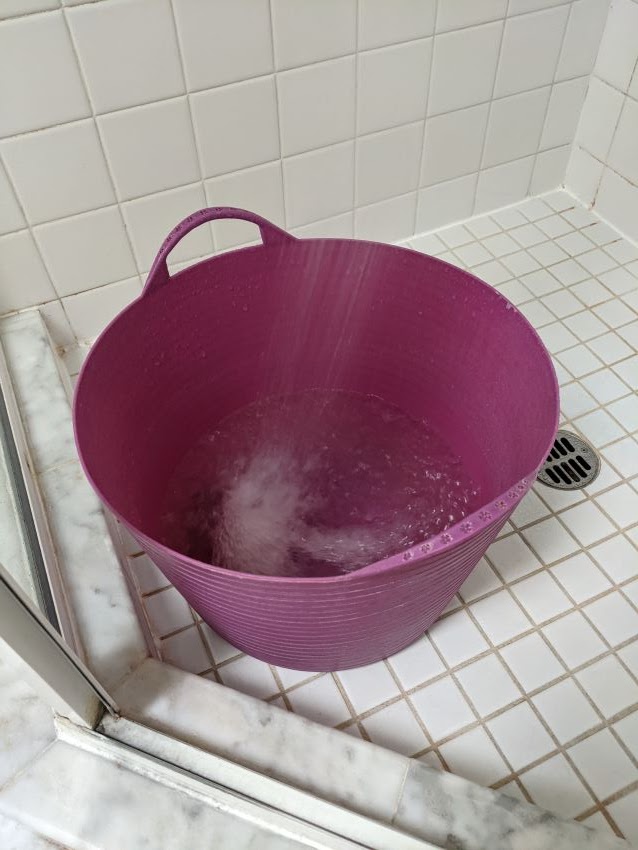 Outside I have a water barrel where I store any water that I can catch. 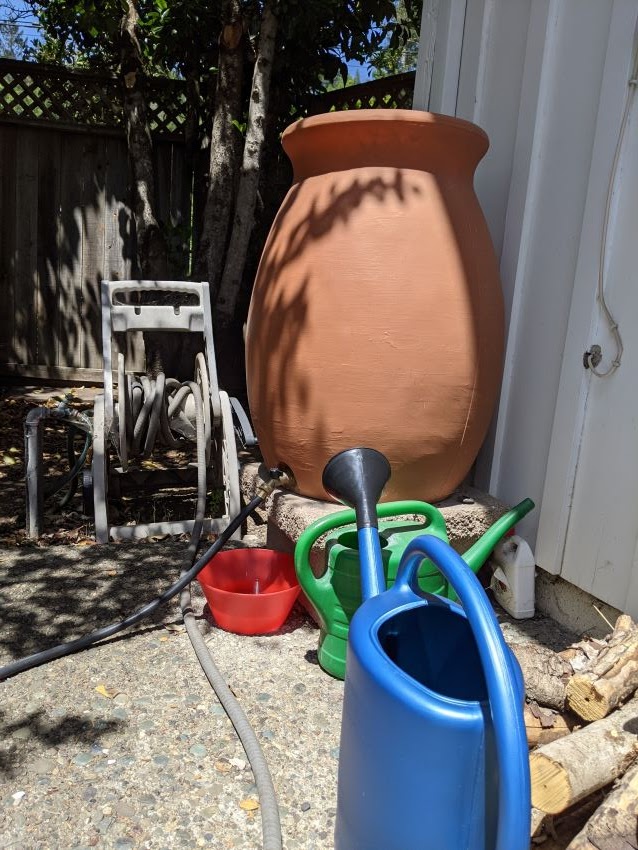 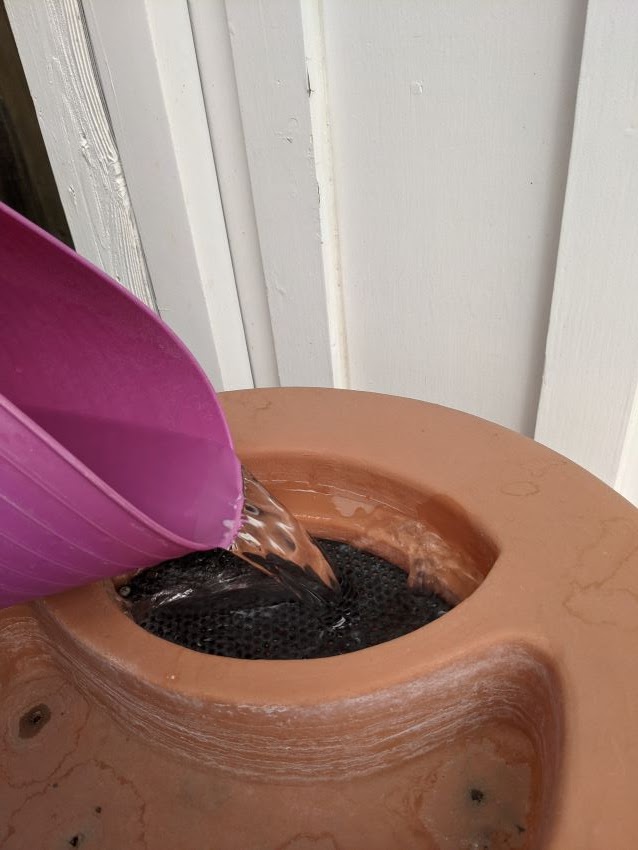 Whenever my watering cans are empty I refill them from the barrel. And here you can see how serious I am about saving water (I guess that's the German in me!) - the barrel is leaking at the tube when I open the valve, so I put a bowl beneath it where I catch that water. Not a drop gets unused! 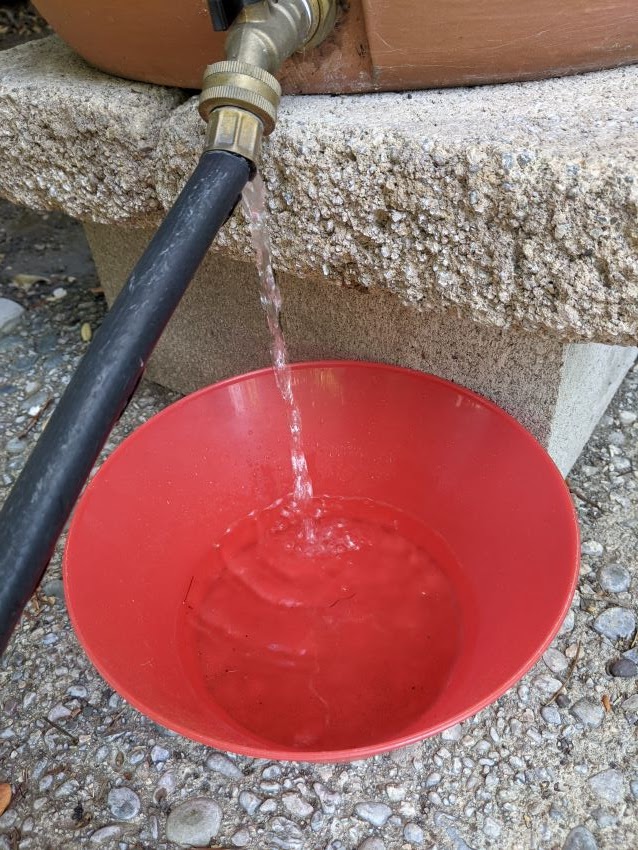 In the kitchen sink I have another bowl where I catch any water - when I wash veggies or the water after I have boiled eggs. Sometimes I even drain the pasta water in here and water a few plants with that - and those plants seem to like the starchy water. 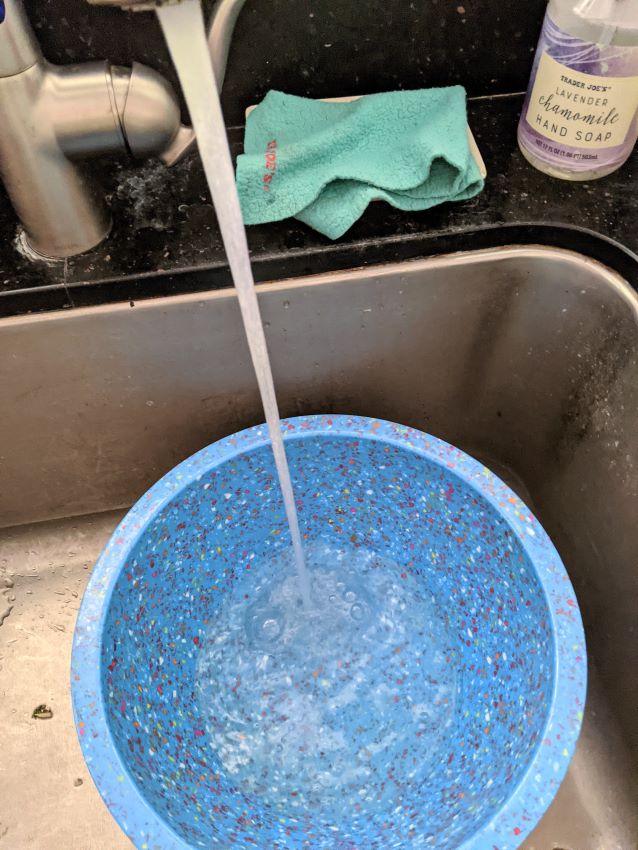 So what about the garden? you might ask. First, I hand water my garden. I have a couple long hoses that I put to work about once a week, twice if it is very hot. Only the vegetables are watered more often than that - but I only have one raised bed with tomatoes, zucchini and some basils. I cut back a lot this year. 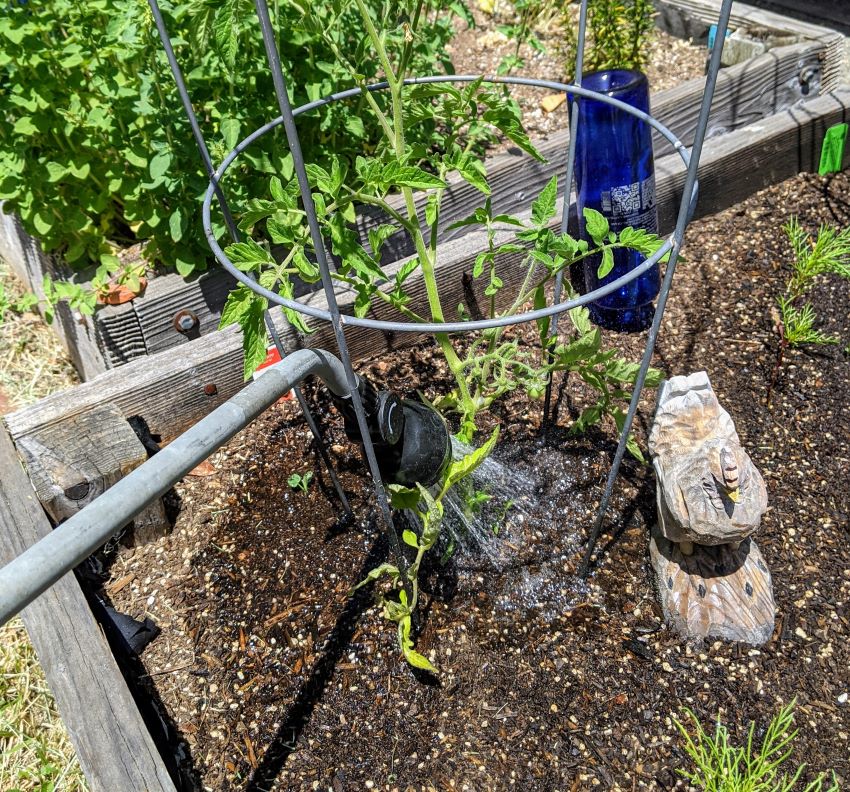 With a very few exceptions my garden is filled with drought tolerant plants. I use California natives a lot, but also plants that are native to Australia and the Cape region of South Africa. I eventually will introduce more succulents to the garden.

A drought tolerant garden does not have to be boring, but can be very colorful. 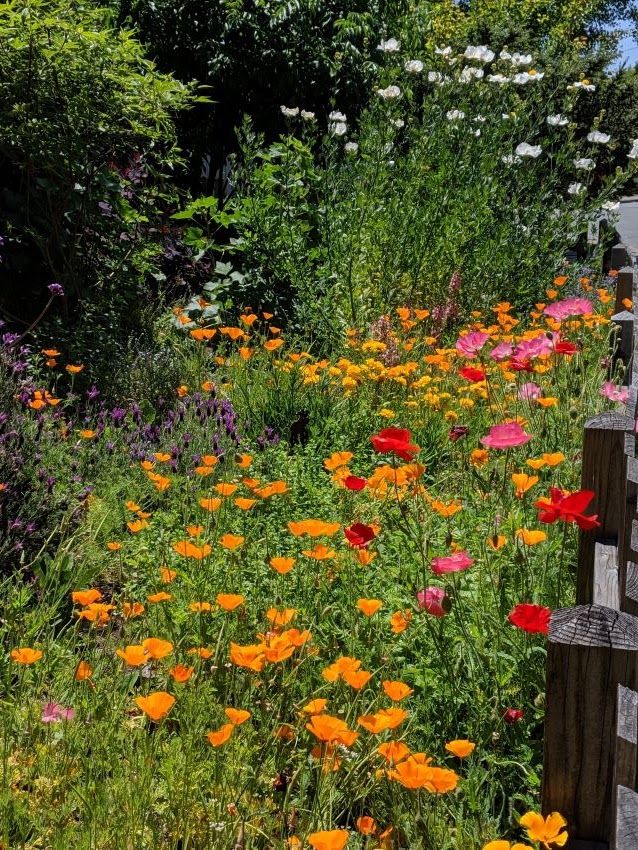 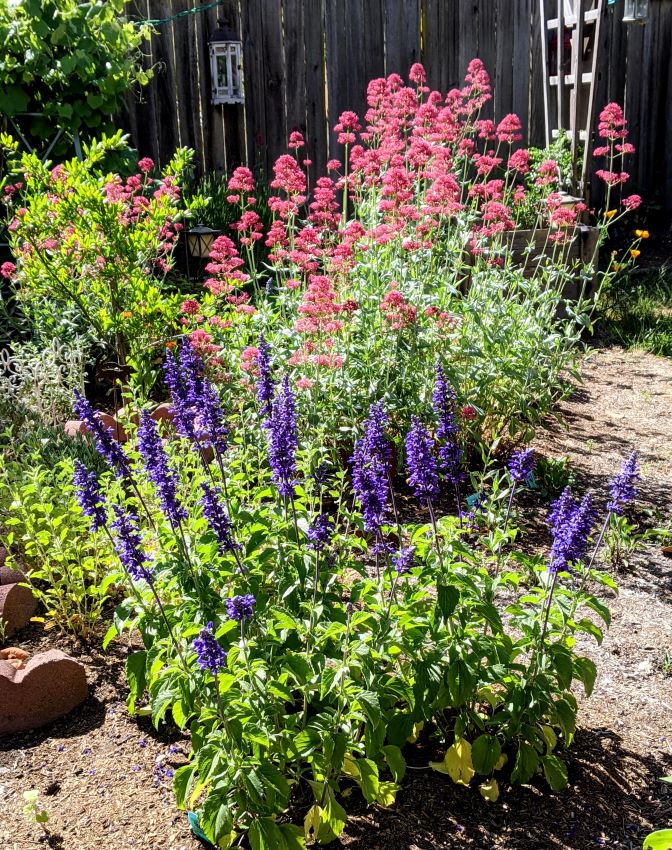 It really depends on having the right plants in your garden. An English cottage garden certainly is not the right choice. 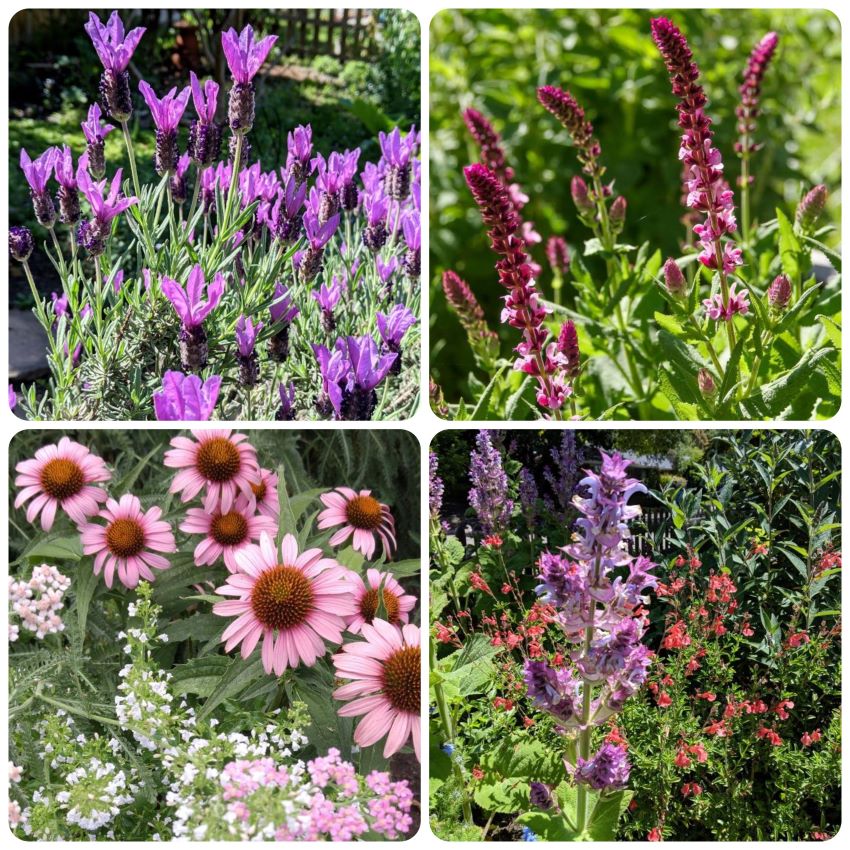 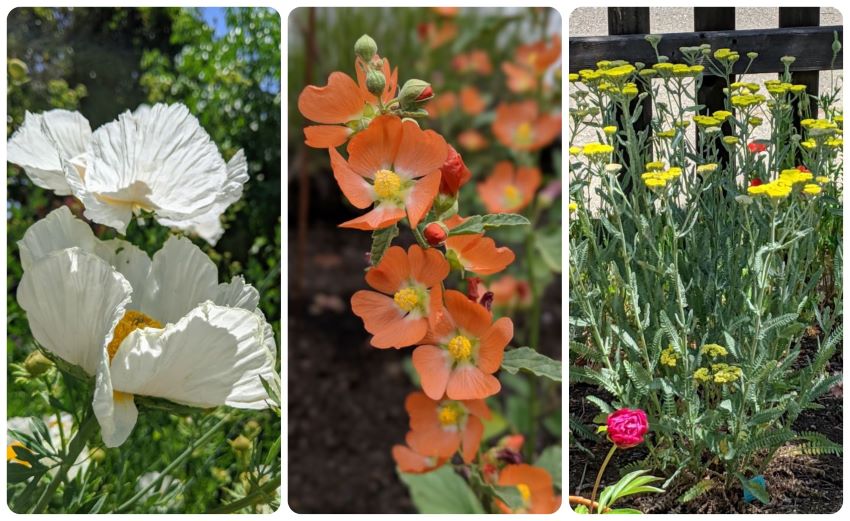 We don't have a graywater system (even though that probably would be a great idea). If you have any more ideas how to save water, please let us know in the comments.

My heart aches for you.
We had a much moister summer than usual and I welcomed it. Like you, we get most of our rain in winter. Rain is forecast for the next few days and I am hoping. Really hoping.
When finances permit I will install rain-water tanks to capture the run off from the roof.
And like you, I focus on drought tolerant plants in the garden. There are some favourite plants I have stopped growing because they are water hungry.

Carola, Yes, I wish it would rain! I'm glad to say that I only have a couple bushes that need watering in my yard.....two mini rose bushes and a bridal wreath bush. My brother said he would put lawn in, but we're on a corner lot and it's a big yard, and that would take much water to keep it going, so no thank you. And after all, I'm in the mountains now, so I prefer the look of the woods. ; ) You have a nice looking garden, Carola, and I love the purple Verbena. You should frame that photo and put it in your home. It's truly lovely. Thank you for this informative post.

Your flowers are beautiful. Growing local happy plants is always a smart way to go, especially in a drought. And I like your water saving techniques. I want a rain barrel, but I also want to hook it up to a gutter, which we don't have. Hope you get some rain.

I saw some of your dry-climate flowers growing wild while touring southeastern Arizona last week, and it’s clear they need very little water. Their bright colors — like those in your garden — were very surprising and delightful, despite the drought. It’s a huge problem throughout the West.

Carola, wish that I could have sent some of the recent rains in Nashua, NH, your way. It was interesting to read and see the many ways that water can be repurposed and reused. I know that drought conditions are even more severe in your part of the country. Your garden flowers are beautiful and very colorful and I appreciate that you provided details as to their IDs as some I did know, but others were unknown to me.

Your yard is lovely. I've used to same options when we've been in drought. When we lived in the country, we ran a water line from the clothes washer to the garden and watered with "gray" water. Worked like a charm. Unfortunately, cities get all pissy when you do that.

This is a really important post and I realized I don't do this well. I love the flex tub idea, especially in the shower. I got a lot out of this one. I also say, "well done." We need to know stuff like this.

I am so sorry about everything! I have to admit, everything I plant, is drought tolerant. I don't water anything! The only thing I find now, is that our trees are getting stressed. These trees are old and have been here before we moved into the house. I think it's great how you capture the water to reuse!!!! I might start doing this too! Big Hugs!

Certainly is a good idea to focus on drought tolerant plants in your garden, the flowers do look very colourful.
You seem to be doing well with your water saving, which is of course so important.