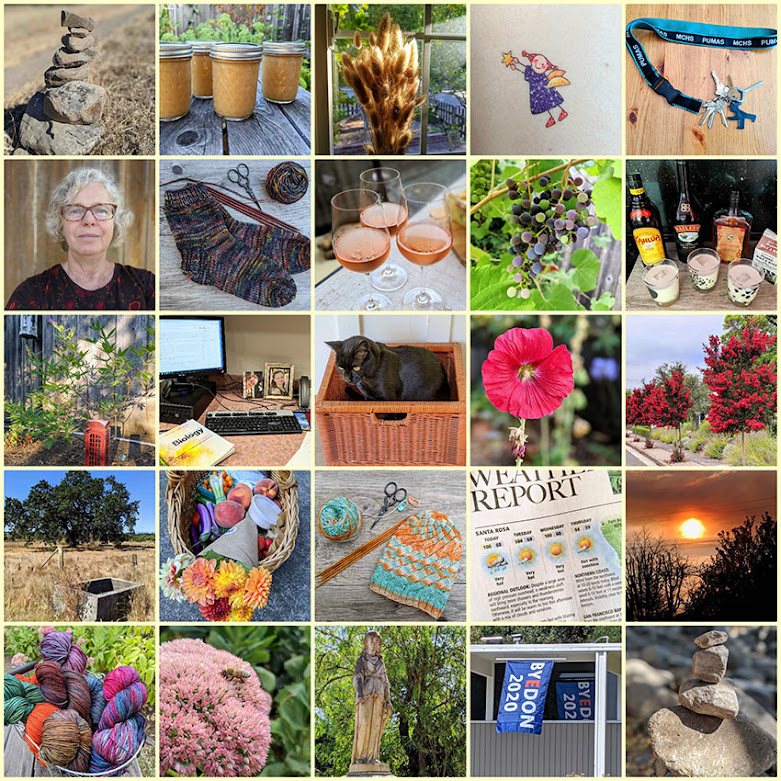 Good to read this post and know that all is well with you despite the devastating CA fires. Also good to read that your garden has been able to survive with less watering. I hope that things continue to go well at school.

I have been watching the news about your fires. My heart aches with and for everyone who has felt the impact.
Hooray for a balance between good and bad.
Of course you will miss your precious girl, but I hope everything goes smoothly at this important starting point.
Hugs.

Sounds like a tough month, almost like our winters that end up with too much snow. We were hot too this whole summer, and we're in a drought here also. Love your photos.

Oh, these fires in California are so scary. One was in Jess' area, but it was on the outskirts of her town, in the mountain area. It's finally being contained, but she was supposed to move and had to wait awhile because of it. I'm so thankful her family is safe. Looks like you've been doing some knitting, Carola. That hat is so charming, and it looks like Fall. Love the colors. Those red bushes are beautiful, and that sunset is just lovely. It's nice that you got to spend some time with your daughter and go on hikes. Sounds like you had a pretty good August. Wishing you happy September days.

Your August sounds busy and a bit sad with the departure of your daughter and inability to be able to be outside because of the smoke. I'm glad your home is safe and hope it stays that way. I'm sure your knitting was beautiful and love your ByeDon sign!

Fire and virus at the same time seems just too much of a burden, but there's nothing to be done. I hope your fire season is ending, and that your new school year plans will go smoothly and healthfully.

be safe... mae at maefood.blogspot.com

Those fires are horrifying to me. It must be so difficult to be trapped inside away from even going into your own yard because of the smoke. I hope the firefighters are able to get them under control and out soon.

Best wishes for safety at your school.

It must be a very difficult situation for you. Dealing with COVID-19 seems insignificant when compared with the threat of wildfires having the capacity to destroy your home. And of course you have faced the dreadful possibility of this before so I can barely imagine the level of stress you have to endure. On top of it all the air quality and the intense heat compel you to stay indoors. It all must be quite awful and I hope that very soon conditions improve. Stay well and stay safe.

Here in the UK we have seen the news about your fires, so dreadful and scary.

I did enjoy seeing your mosaic/montage of pictures.

Beautiful photo collection! Made me smile during these times! I especially love the hat in the second row from the bottom. Such beautiful colors! And I see some canning done. Thanks for visiting my blog and stay safe with the wildfires. Scary!

Dearest Carola, thank you so much for this beautiful mosaic of beautiful memories and things that you shared for us. I feel very sad to hear that the heat is excruciating on your side of the planet because I also kept hearing from my older brother in CA that they will not go outside this Labor day not just because of the COVID but even so, the heat! We also get very hot days here which is very unusual for September but at least the air here is more humid than dry. Wish you well and please stay hydrated!

I really like your collage of the month, a great way to tie it all together. I just checked out the clothing line you suggested and I love it...everything is so unique and the colors and patterns are marvelous. Thank you! I signed up to get their newsletter.

We have had a hot summer here but my goodness, nothing like you have had. I have read all about the fires and do hope you all get some rain to help out. Great collage!

Nice to see you! Oh, I missed out on your posts...
Glad you´re OK and that is a cool (haha) way to put a month online!