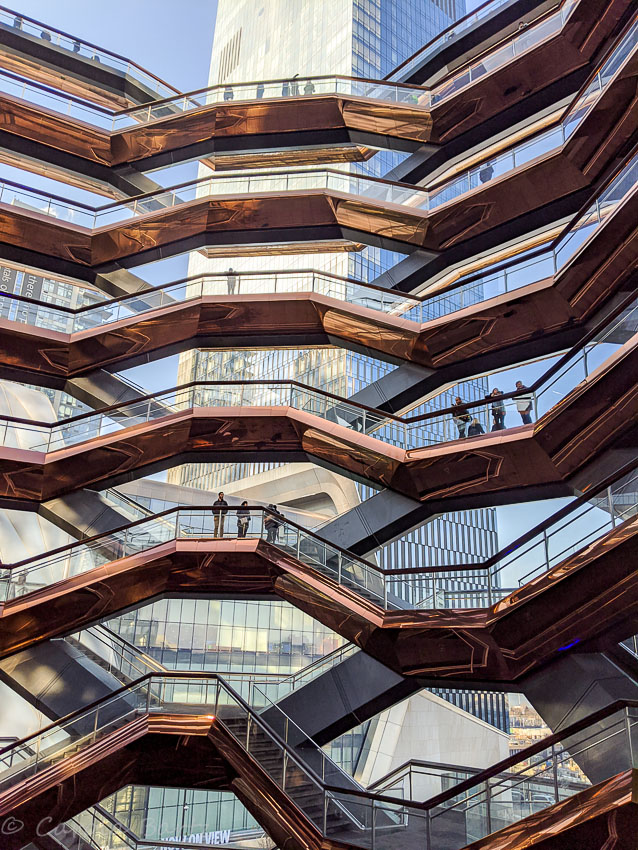 One of the structures I was very curious to see in New York was the Vessel. At the end (or the start) of the High Line, both were features that weren't there during our first visit to the Big Apple. The Vessel - which still hasn't got its permanent name - was only opened in March 2019 and hadn't even made it into my travel guide. I only knew about it because I had seen pictures of it on Instagram and I was intrigued. 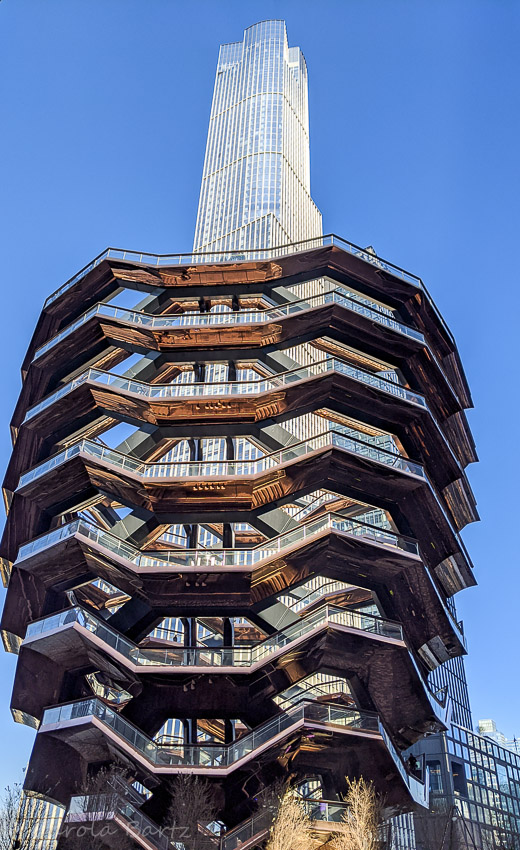 I'm not even sure how to describe it. Wikipedia describes it as a "elaborate honeycomb-like structure [that] rises 16 stories and consists of 154 flights of stairs, 2,500 steps, and 80 landings for visitors to climb". That pretty much sums it up.

The Vessel was built as part of the Hudson Yard Redevelopment Project in Manhattan to plans by British designer Thomas Heatherwick. The steps are arranged like a jungle gym and modeled after Indian stepwells.

Well, I sure felt like being in a gym - there was a lot of climbing involved. I was determined to reach the top, and I did. It was actually quite fun to take the different stairs. I chose to climb the stairs in a circular way and thus rounded the entire structure more than once. 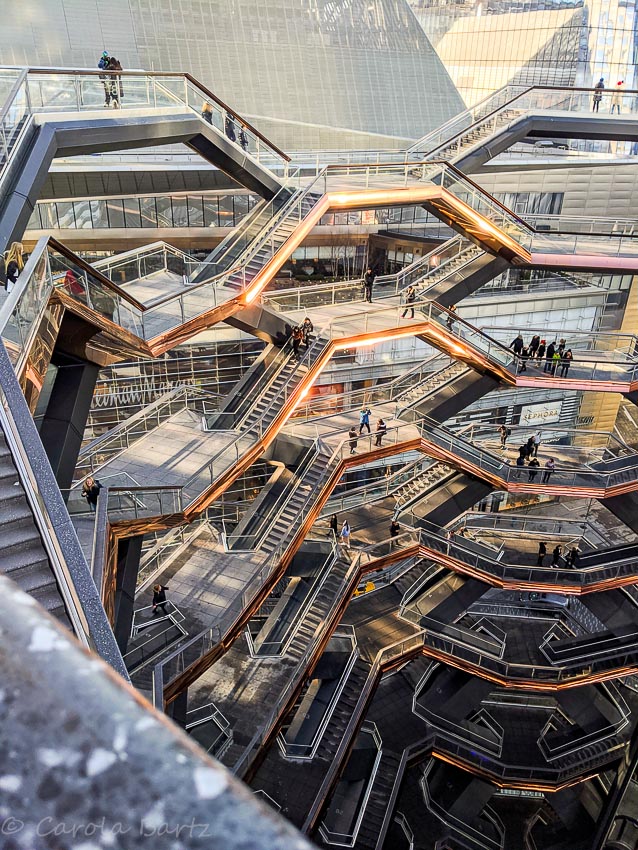 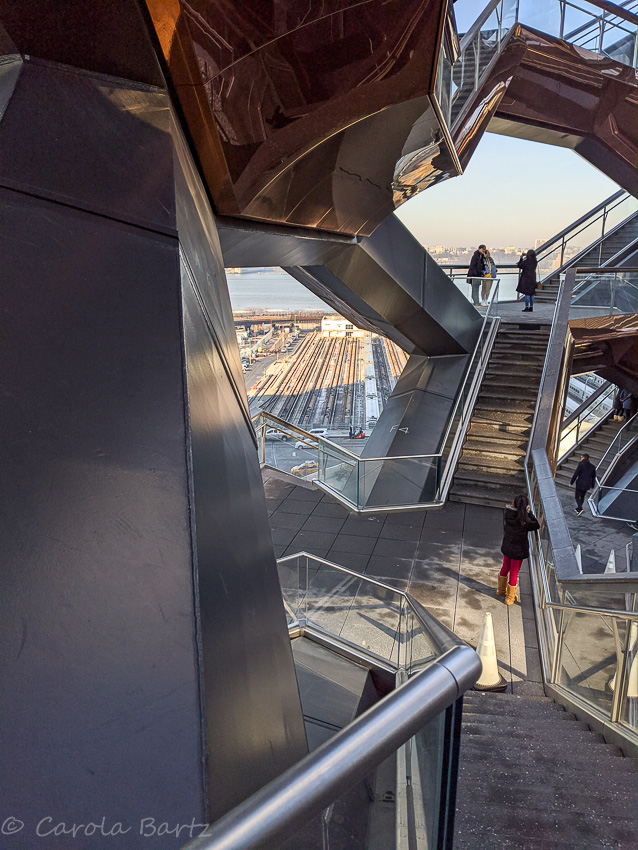 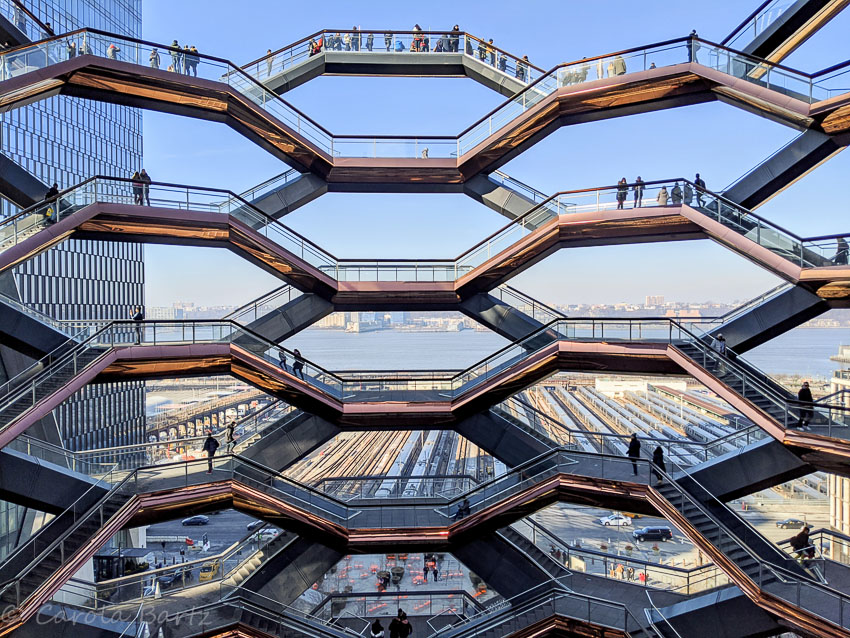 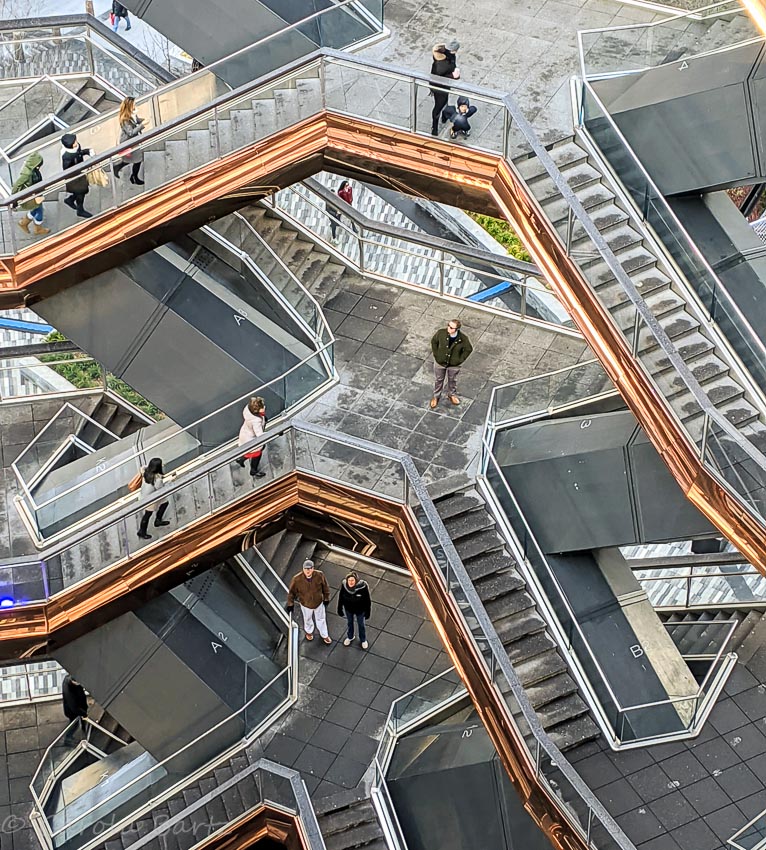 I liked the view of this hotel's outdoor space with cozy sofas, swimming pool and saunas. 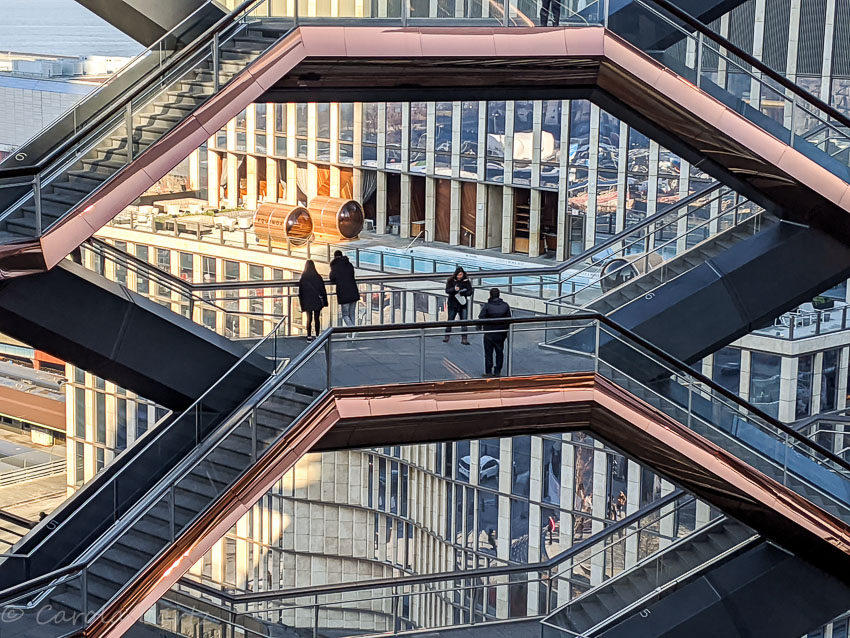 The reflections in the copper were fantastic and, of course, upside down. 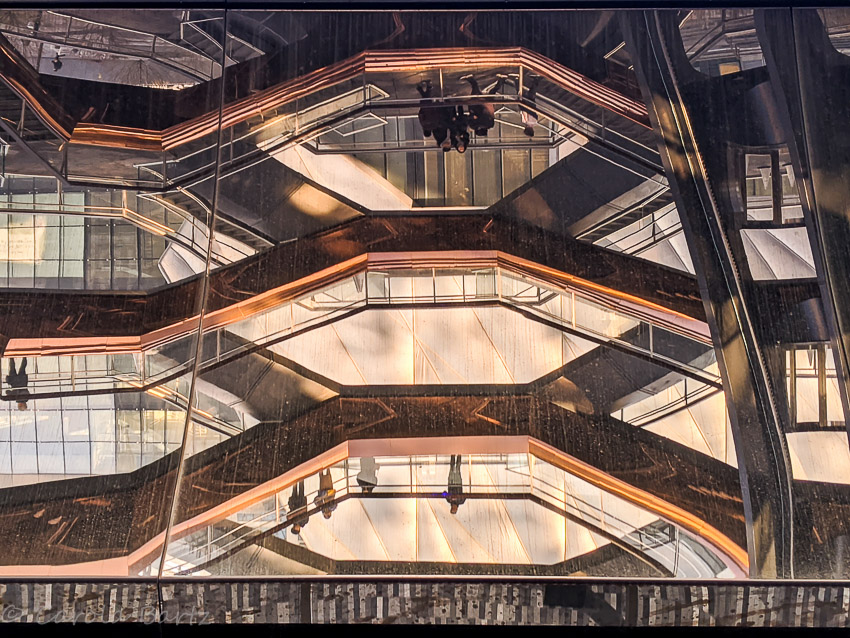 Back down on the ground I looked up - it looks so different from down there and truly interesting. You can see the elevator in this picture which, as far as I understand, was put in a bit later after the structure had received a lot of criticism because of its lack of accessibility for disabled people. 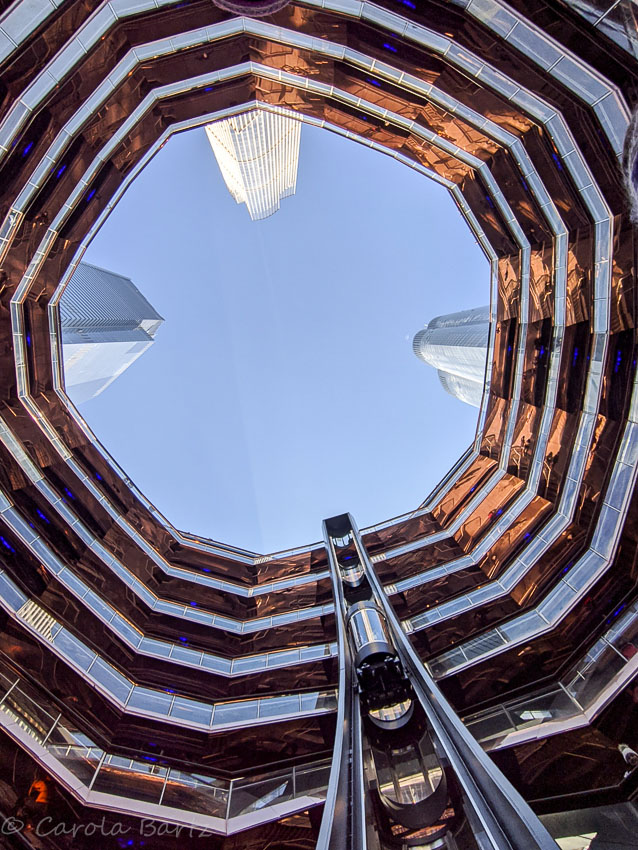 The look upwards from outside the structure: 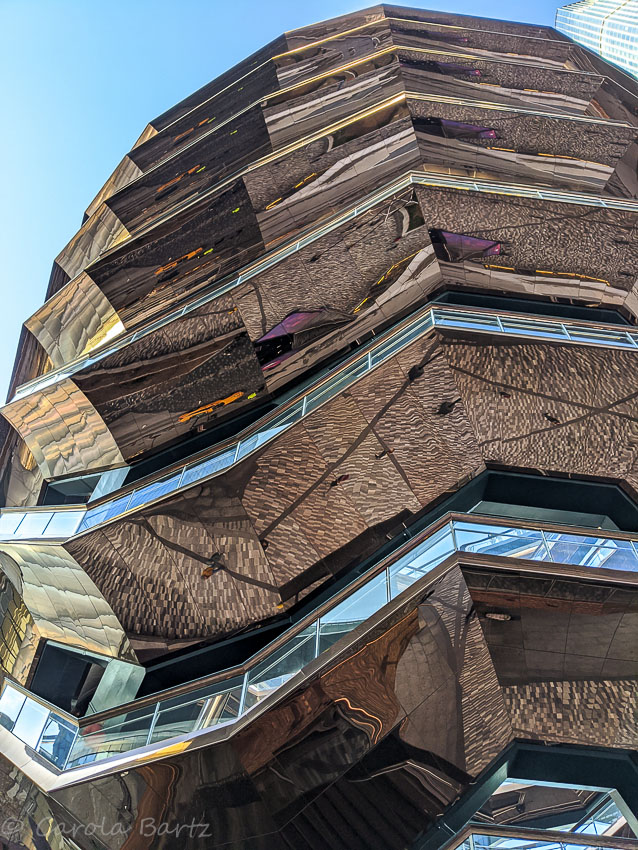 We came back in the evening after dark because we were wondering whether there was some special light installed. There wasn't, but the decorated trees in front of it lit everything up beautifully. 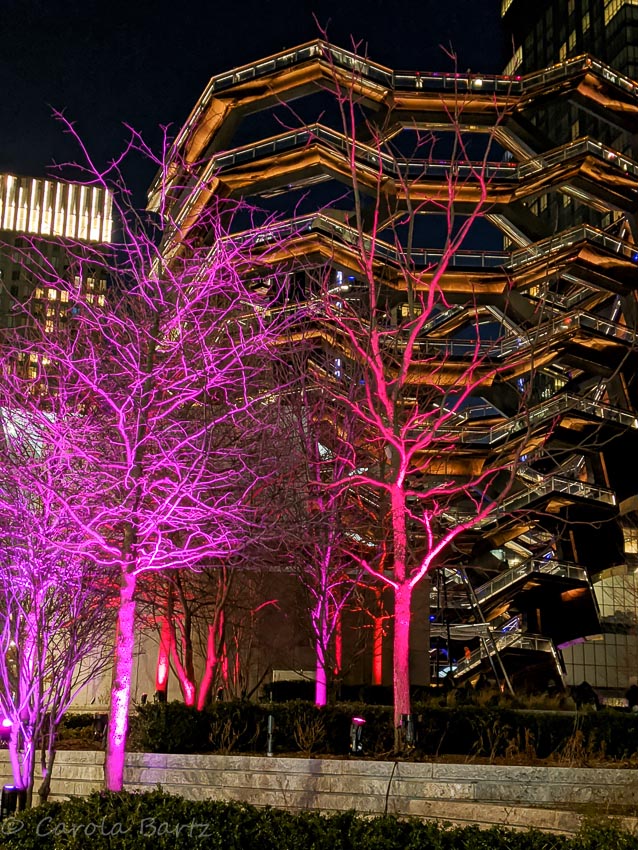 Wow. That looks like a most excellent workout and I love the differing perspectives your photos captured.
And yes, I am glad that there is an elevator so that it is available to all of us.

I see there is an elevator, my knees would not do well with all those stairs, great photos

All I can say to this is well done, you! And pretty fantastic photos, too!

I had not heard if this building at all, but it certainly resembles a honeycomb, and is an interesting concept. Must be a great addition for nearby workers who want to get a little exercise during their lunch hour, and as you have proven it has the potential to become an important tourist attraction. And it's free!

That is so cool. I haven't even heard of this, but the views of it and from it are stunning. I think a good walking/climbing workout would feel good right now, at least for me. happy almost weekend. Hugs-Erika

Wow, this is amazing, Carola. What an experience it must have been to visit. The copper railing is cool. The passengers look so small in this GRAND place, and you captured some awesome photos. Truly some good ones. : )

This place looks fascinating! I've been to New York many times, but have never heard of this site. Your photos are so interesting!

Goodness me, this looks different and interesting …