The Journey of a Japanese Pagoda 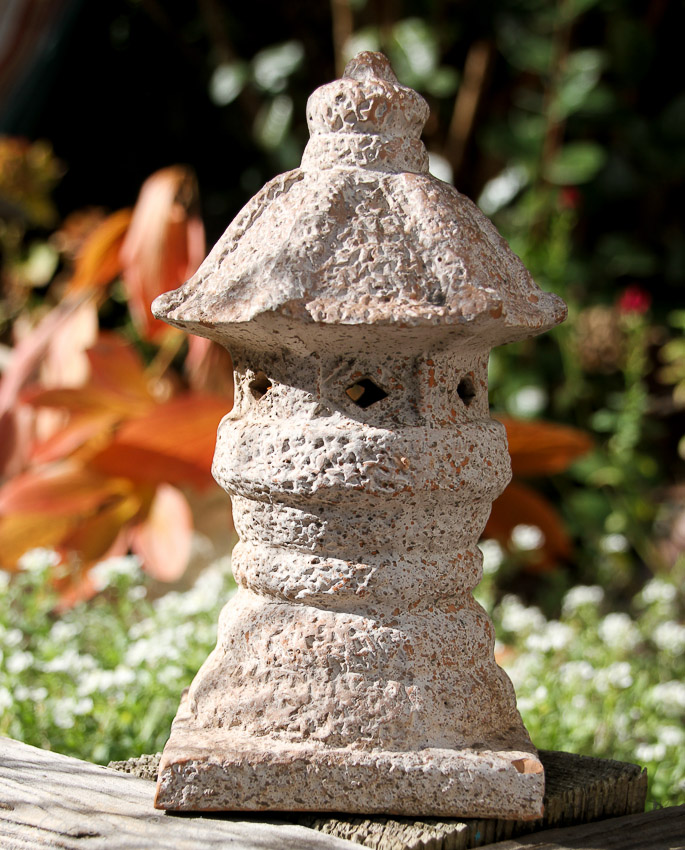 In 1999, when we were still living in Germany, the Geek had to go on a business trip to Japan. He had a free weekend during that trip and beside some sight seeing he also looked for little things he could bring back to us. Among them were two small concrete pagodas that I loved to use as decor among the flowers on my balcony.

When we moved to California, thinking we would return after three years, the pagodas went to storage. Since after those three years we decided to stay in the US and had received the Green Card, all our belongings were shipped to the home we lived in at that time - the Brookdale House.

You can see both of them sitting on the ground - as you can imagine, I wanted to take a photo of Ginger and only years later, when I was looking for it, discovered that the pagodas were in the picture. 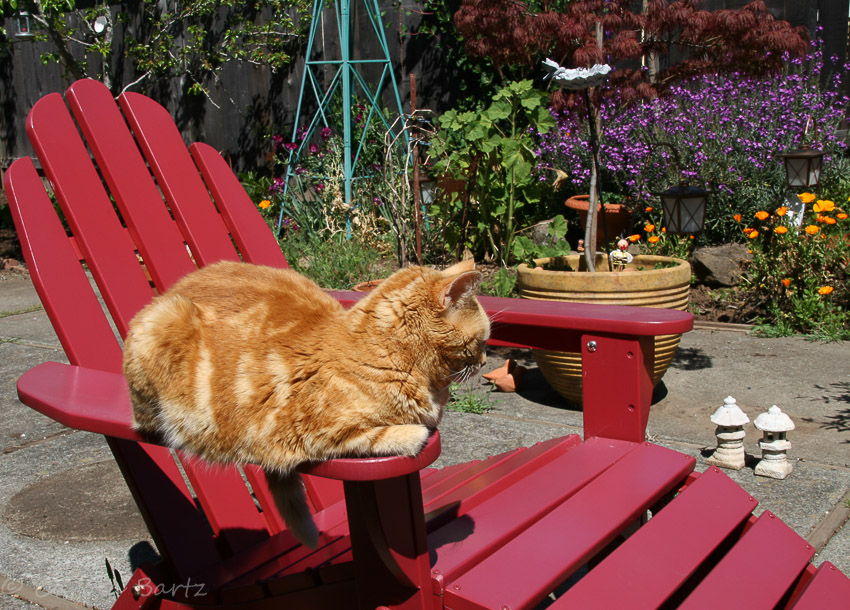 I remember having them sit there for quite a while before I made up my mind where they should go. They first went into a container with some plants. 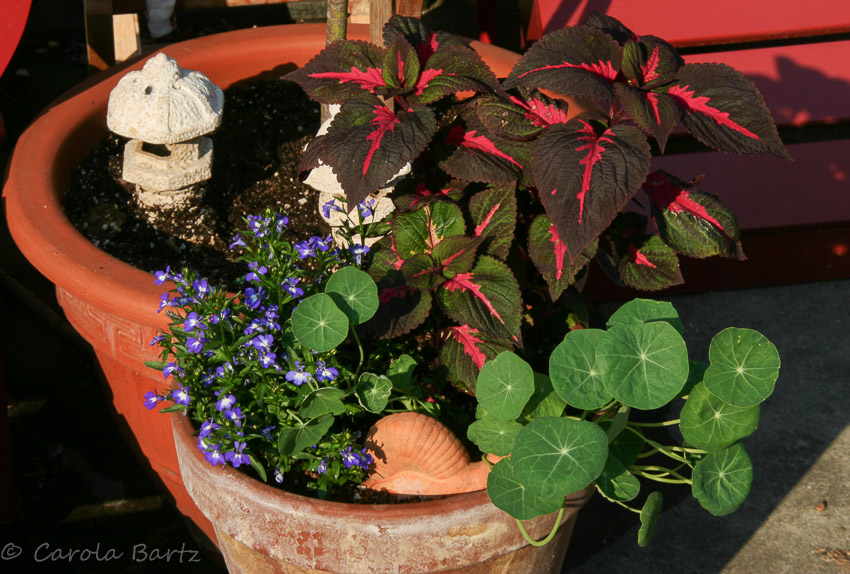 Finally, they both went into the ivy that was growing in one corner of the backyard. They were hard to see after a while. 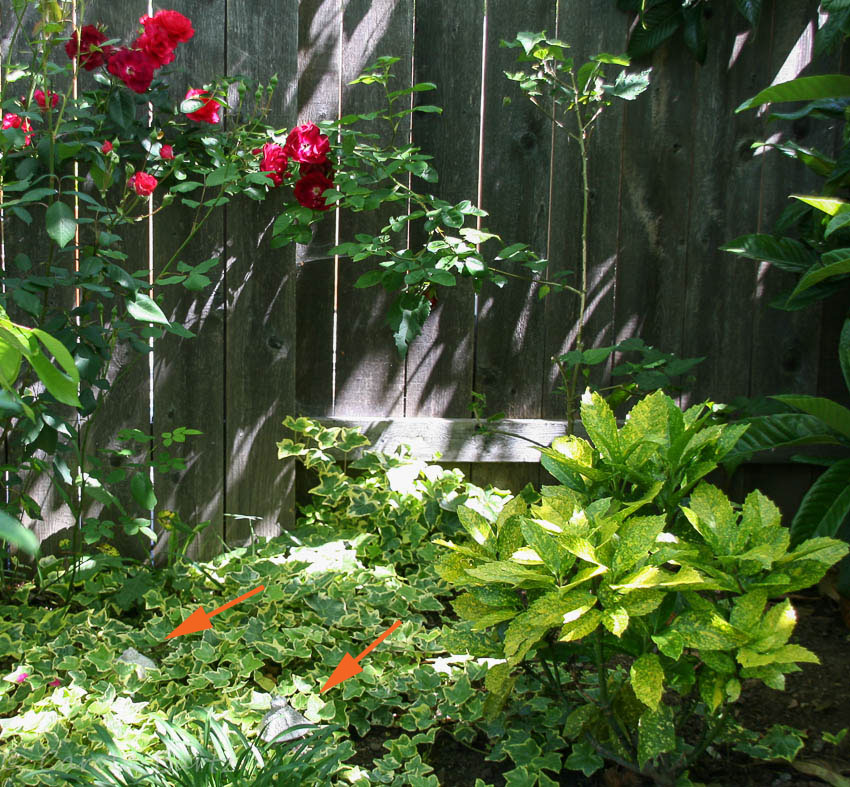 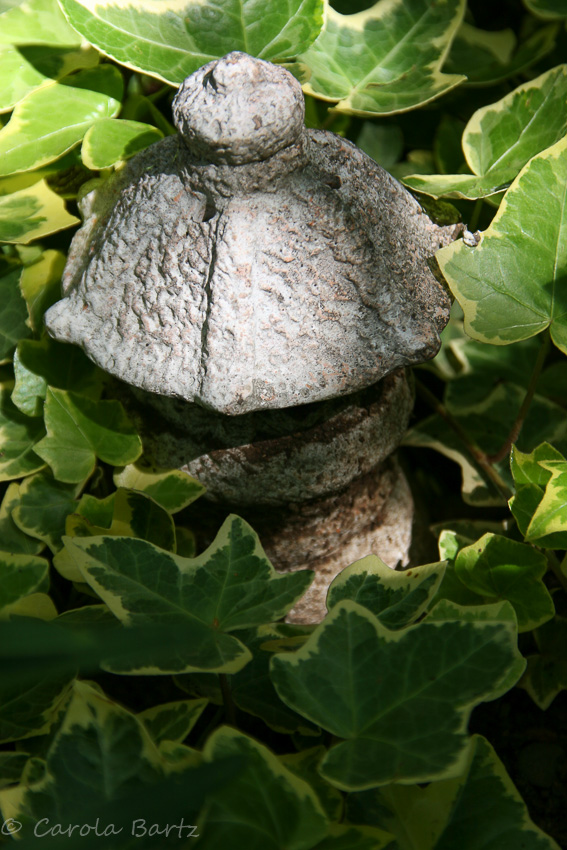 Eventually they had almost completely disappeared under the ivy. 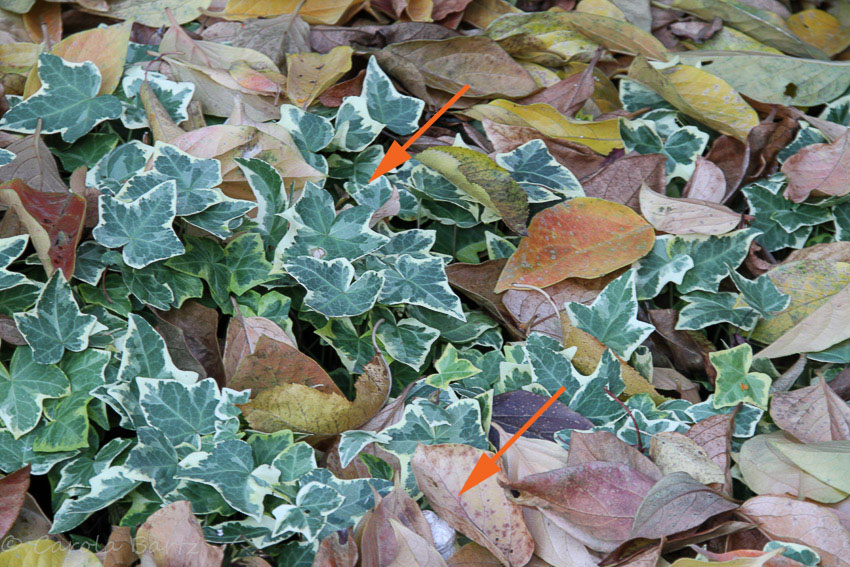 When we moved out of the Brookdale House, they ivy had taken over and the pagodas were hidden somewhere beneath it. In all the chaos of moving I had totally forgotten about them. Only a few weeks later I remembered them, but by then it was too late to go back to the house and ask the new tenants whether I could look for them in the backyard.

The Brookdale House burnt down during the October firestorm in 2017. Three weeks later, when we went up to our old home for the first time after the fires, we got the permission to enter the property. We walked around what was left of the house (it wasn't much) and recalled where everything used to be in the house. We also went into what used to be the backyard. Of the beautiful redwood deck only parts of the concrete foundation remained; there was a stump of the plum tree that my friend Jo harvested every fall; a skeleton of the persimmon tree. This tree used to be in the midst of the ivy, but nothing of the ivy was left. Everything was burnt.

But then... when I turned around I saw this: 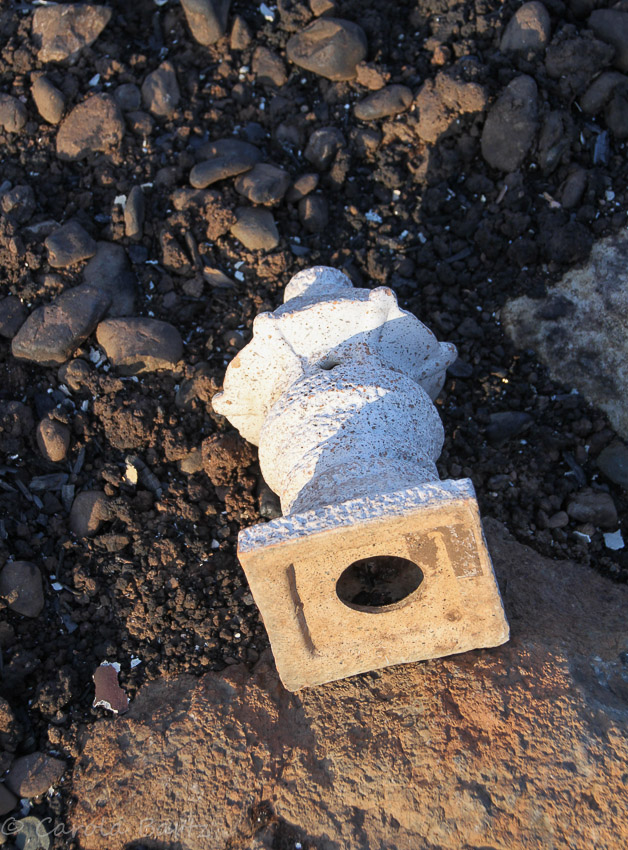 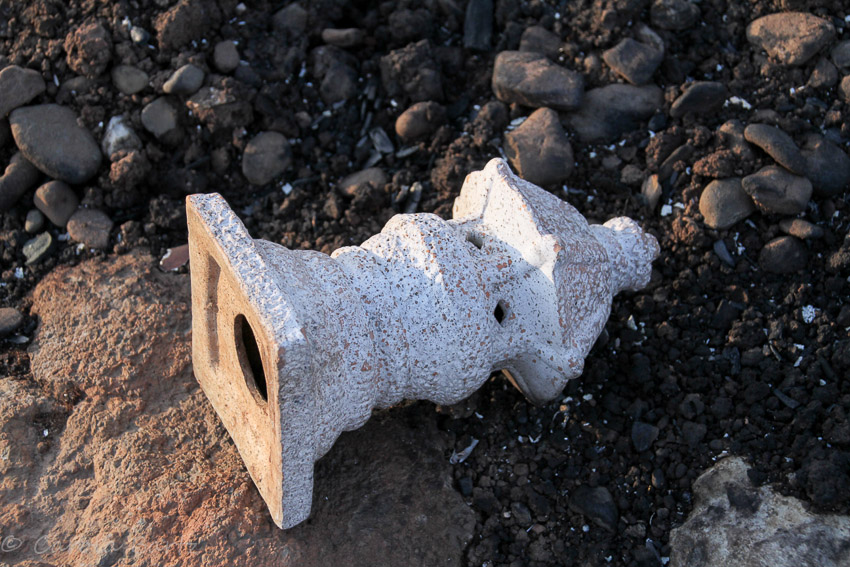 I first couldn't believe my eyes and thought I was hallucinating. One of my pagodas had survived the inferno! I never found the second one, but I was over joyed (and crying) that this one was still there.

Since it was mine I took it with me. For the longest time it was sitting on our dining table. Sometimes I turned it around - it had a "beautiful" side (in the top photo), but it also had the telling side with the burn marks. 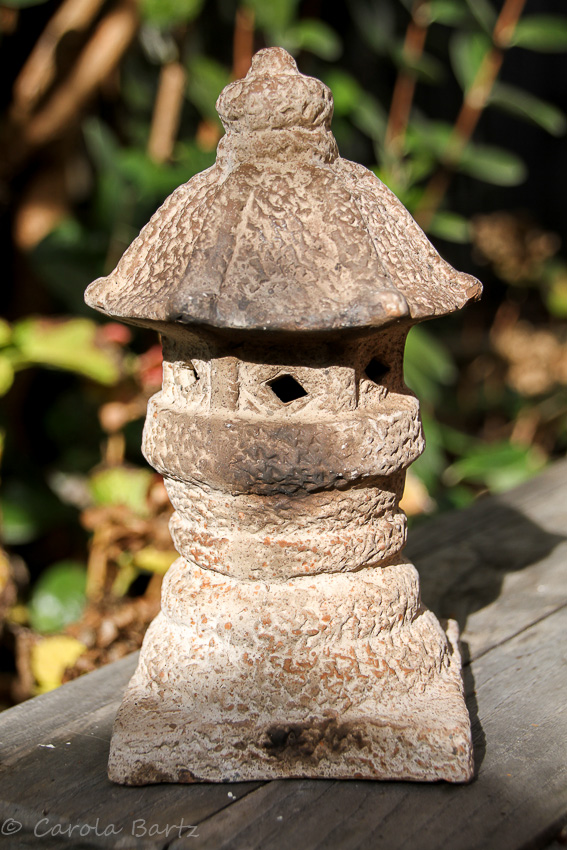 When spring came it moved outside into one of the big flower pots. 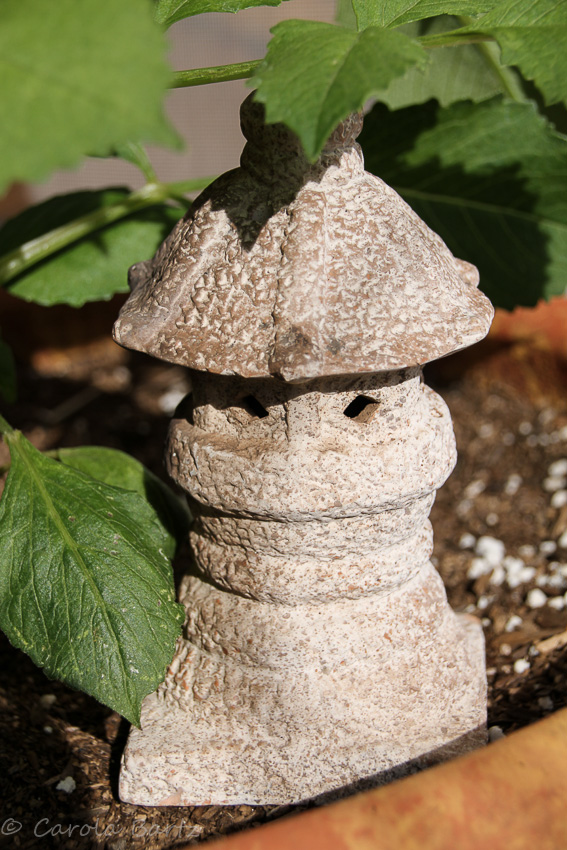 Finally I moved it into the garden, right beneath a young vitex. Over the months it has changed its color and looks more terracotta now. It will never live among the ivy again. 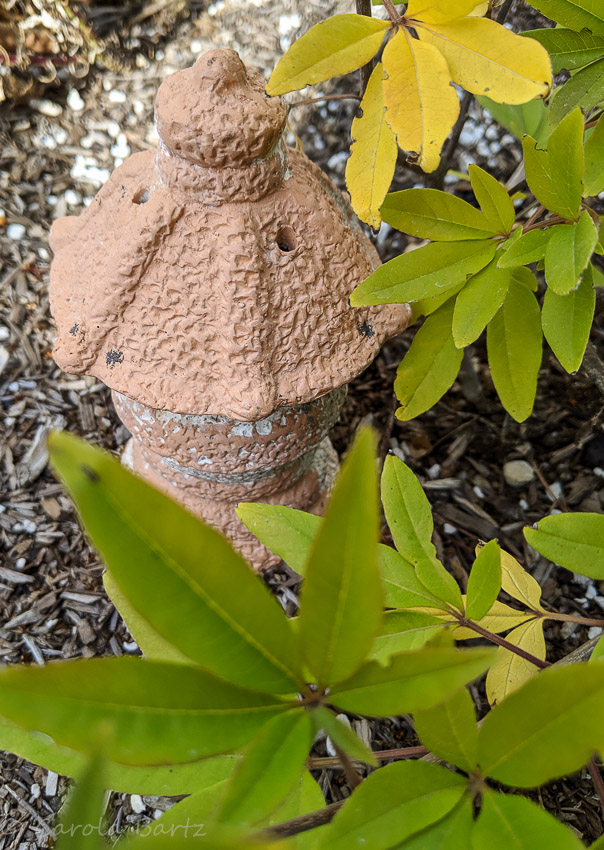 Tomorrow, Wednesday, October 9th, is the second anniversary of the 2017 firestorm. It is ironic that we have very similar weather conditions again and as a preventative step our utility company will shut off the power over a large part of Northern California. The outage will start tonight and last at least until Thursday evening, but restoring the power can take up to five days. If you don't hear from me, you know why.

Your story of your two pagodas started out very calmly and then took a dramatic turn as I read of the devastation from the fire, and the sweet joy of you finding one of the pagodas had survived. I know you will take special tender loving care of it now and in future. I am in the area with the power outage possibility too.

Half way across the world I am weeping too. And am so glad that one of your pagodas was found.
Fires are burning out of control here, and over 30 people's homes (and those of many more birds and animals) have been lost.
If this is Spring, Summer fills me with fear.

Yes after all that it is yours. The fire gives it a nice patina. and it is a cool little object. Too bad the other one wasn't found but that's ok because this can carry all the memories for both of them. Hugs-Erika

Those pagodas were meant to stay with you. If they could speak I am sure that they would have many interesting stories to tell...maybe even a few scandalous ones! It must be a sobering experience to visit a former home that has burned to the ground. Unfortunately fires seem to occur ever more frequently and with increased ferocity.

What a story! The pagoda has returned to you. I had no idea you have to have power outages because of dryness and fire danger. We're very dry in CO, too, but tonight the mountains will receive snow.

What a lovely story, so happy that you found it again and now can cherish it more than ever.

This is one of the most wonderful stories I've ever read. I'm so glad you found it! They are so charming -- when you first said he brought a cement pagoda (2!) from Japan I thought he must have had light luggage or went way over the limit. These small ones are really so sweet and perfect for the pots. That had to be a bittersweet visit going back to where your old home was so finding this all the more special.

The photo of your beautiful orange boy on the red chair made my heart beat very quickly! Beautiful!

What a story, and I'm so pleased you now have one of them.

Thinking of you, these power outages have been reported about here in the UK.

I hope you have not suffered too much from the electrical outages. I know there are some fires in California but I think not in your area. I wish you well in your challenging area of the world.

This is a wonderful story - something good from a terrible event. I hope everything is going well; I've been hearing about the wildfires in California. take care!

Wow, what a story! I am so happy you have one still! Please take care of you!!!! Sending lots of love! Big Hugs!