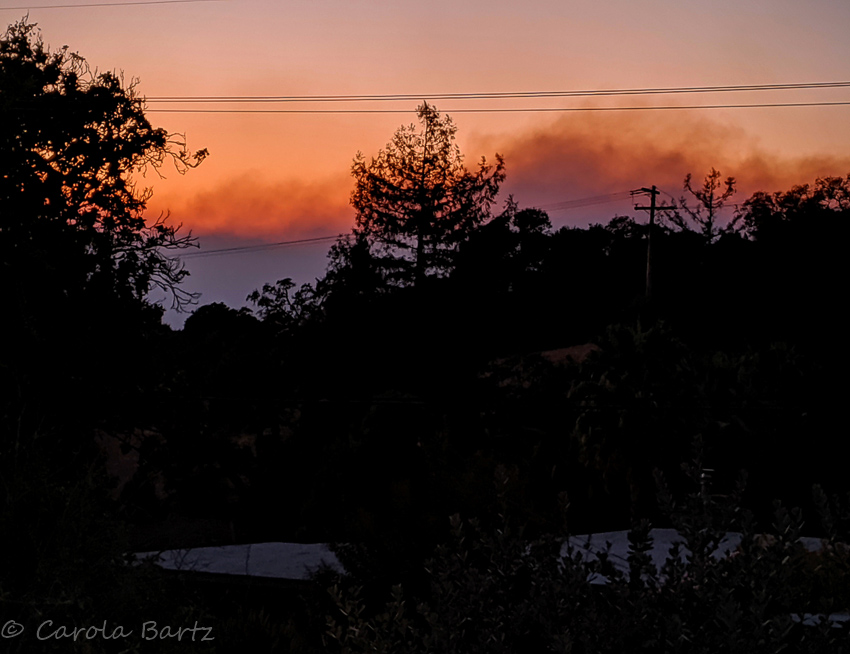 Many of you have sent me emails, messages through Facebook and Instagram or commented on my last blogpost asking how we are doing in our current wildfire. Thank you so much for thinking of us and checking in. So here's a brief update.

We are still home and we even have power. With that we belong to the lucky ones because many are without power and even more had to evacuate. The wildfire started last week at The Geysers, a very large geothermal field. The fire, called the Kincade Fire, quickly spread, threatening Geyserville and the beautiful Alexander Valley. On top of the large fire there were extremely strong winds in the forecast for the following weekend. Last Saturday morning at approx. 11:00 the massive mandatory evacuations started and so far about 186,000 people have been evacuated - the biggest evacuation ever in the history of Sonoma County. Everything has been very organized - the evacuations were ordered in phases, beginning with the towns of Healdsburg and Windsor which are closest to the fire. They quickly were extended to the west of the county to the coast which is a huge area, much of it densely forested with small towns and villages in between as well as vineyards and only small winding roads - a nightmare if people had to get out there with no time and in panic. Then even the Northwestern part of Santa Rosa was evacuated.

The night from Saturday to Sunday was restless and intense with constantly new Nixle alerts coming in. I got up shortly after 4:00 am since the fire was getting too close for comfort. We had already packed the car on Saturday and were ready to leave any minute if we had to.

So far we have stayed put since our area is not under mandatory evacuation order. We are on alert and a bit on edge. The air quality has become very poor since the smoke is making its way down here. We have the air filter running inside and only go outside if necessary, wearing N95 maks. The winds over the weekend were wild and scary as predicted with the result that the fire doubled in size and is only 5% contained. Today, with winds having died down and expected to pick up again tomorrow, the firefighters are aggressively attacking the wildfire and I hope they will be successful. We are deeply thankful for the endless and tireless efforts of our firefighters and first responders - they are the true heroes.

This is a very bad déjà vu of the October 2017 wildfires when entire neighborhoods in Santa Rosa burnt down. Many of the rebuilt homes or houses currently under construction are in the mandatory evacuation areas. I can't even begin to imagine how these people must feel right now.

Thank you for letting us know.
I hestitated to send you an email, but worried.
My thoughts go out to everyone in the path of the fires (and the smoke).
Sadly similar scenes are being played out (again) in Australia too.

I can understand it very well. Power was shut off in many of the neighborhood areas here . Yesterdays strong wind wrecked a havoc here. Hope you are fine. Hope everything will come under control very soon.

Good luck. This must be a terrifying experience to go through.

I'm sure you are very much on edge. Maybe all the more so for what has been in the past. Sending many good wishes that you can stay put and that they can get this under control very soon.

That is a sunset I've come to dread. Will this cycle of fire ever stop?

I appreciate you taking the time to let us all know how things are going. Do stay safe!

I'm keeping a watch on the fire and thinking of you, Carola. I'm glad you are set-up already with masks and an air filter. Such devastation.

I've been keeping watch on your updates through IG Carola. Thinking of everyone there and can understand a little bit of the anxiety of not knowing what's going to happen.
Living with the smoke-filled air is hard, and its gone on for a long time for you over there.
Warmest good wishes xx

Oh Carola, I feel so bad for these people. So many have been evacuated. These crazy fires in California. I didn't realize you were that close to it. Thank you for the update, sincerely, cause we gets bits and pieces from here and there, and it's nice coming from a reliable friend. Take care, and thinking of you at this most difficult time. Yes, thankful for the firefighters.

Hope that you are still home and are safe. I have seen photos and that fire is very scary. Hopefully they will have it under control soon and that the damage to people's homes can be minimal. But I am not so sure that is happening.

Thinking of you, stay safe.

This fire and the one near LA are frightening and I hope you continue to be safe and that the air quality quickly improves. I was affected by the planned power outage last week for 36 hours, but can't really complain when so many are in harm's way. Be safe my friend.