Since I have joined The 100 Day Project I have mainly shot pictures for my theme "100 days in my garden" throughout the month and not much else. May is also the month of high school madness due to the end of the school year and the high amount of work in the school library. Ergo - not much else was going on in regards to photography. No wonder then that my chosen photo - actually two of them that I collaged into one image - is from the garden, but also connected to work. Both were taken on the very last day of the month. 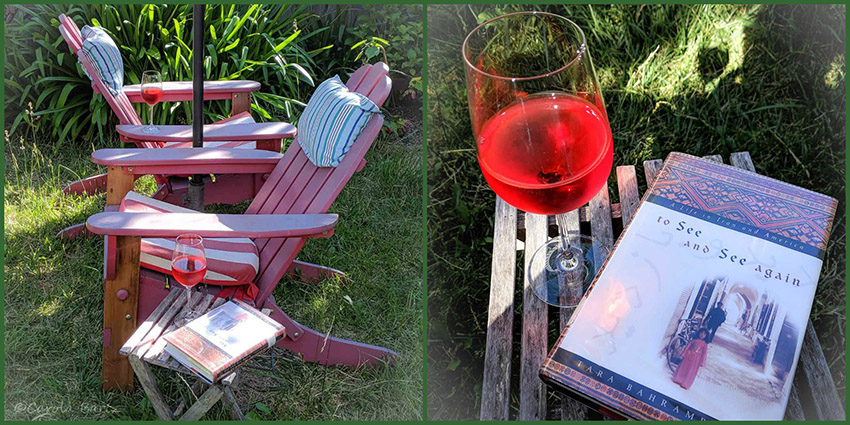 Friday was the last day of school which meant we had a steady flow of students wanting to return their books, paying overdue fines and getting clearance slips for their graduation ceremony in the evening. I opened up earlier in the morning than usual and the first time I could actually sit down for a couple of minutes was almost four hours later. When I finally got home another four hours later I was totally wiped out, my feet and hips hurt and the only thing I was able to do was lying down on the sofa and within minutes I was fast asleep. Oh, the bliss of a good nap! It was early evening by then, the Geek came home from his work and we just had a lovely quiet hour outside in the garden, sipping a glass of rosé and reading - a book I had brought home form the library that was just returned a couple days before. It was pure bliss and the perfect start in the weekend.

I have a few more days at work until my long summer break - almost eight weeks! - will begin. There is always work for the German School to be done during the summer, but it is far calmer and slower than the end (and beginning) of the high school year.

Email ThisBlogThis!Share to TwitterShare to FacebookShare to Pinterest
Labels: An Image and Its Story, garden, high school, school year, work

That looks like a totally needed (and equally totally deserved) patch of bliss.

I hope you have a nice Summer break, Carola. The school year is almost over for Jess too teaching her Elementary students. The wine and book sound like a nice way to relax for awhile. I also wanted to mention the animal photos from the dessert below. They are incredible. I don't like lizards, and I see them all the time around here in the Summer. That big Iguana is interesting. And that wolf and mountain lion are beautiful. Enjoy your Summer break. : )

Oh dear! it was hectic day for you.

Compelling me to come and sit awhile.

Sounds like you can use a nice long break! We’re still at the beach but leave for Breckenridge on Wednesday. I love those pink chairs - so pretty in your garden.

You know I agree with you about the nap and the wine! That book title is also very interesting.

I have 2 weeks to go. I am so ready. I love how you represented the end of a busy week and the end of the school year. Just perfect!

I'm so glad school is out for summer! Just a few days and home free! Great photo!

Yay! You made it through May and what a good way to celebrate with a book and a glass of wine.

Your nap and glass of wine in the garden were well deserved! I can’t think of many things that would be nicer. Just a few more days and a nice summer break!

Great photographs, I do like your chairs :)
Have a wonderful, and well earned, summer break.

I am curious about the book.
Amalia
xo