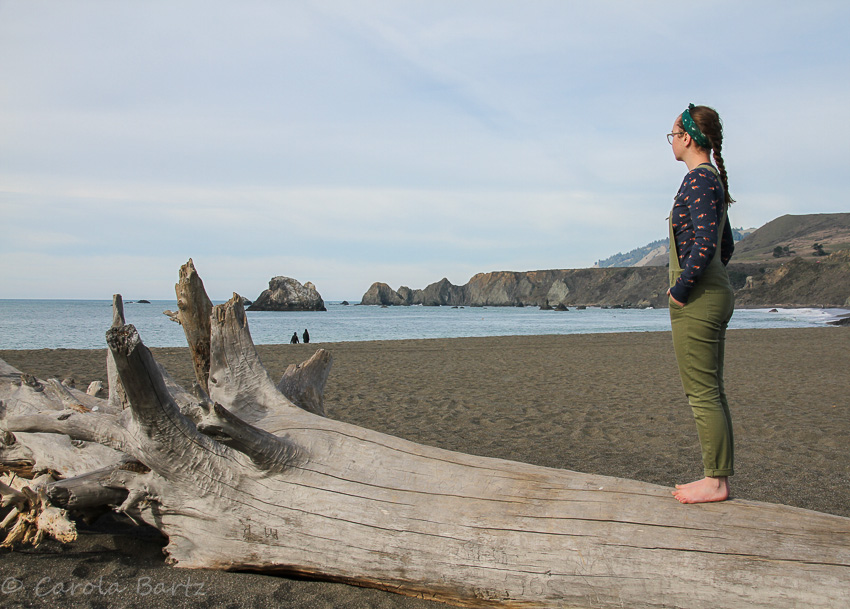 Winters in Northern California can be very different - sometimes they are mild, even quite warm; others bring multiple storms with a lot of rain; some are cold and can even include a dusting of snow (and heavy snow in the Sierras which we depend on for our summer water). This past winter we had a combination of all of these, but the stormy and rainy part certainly played a dominant role. 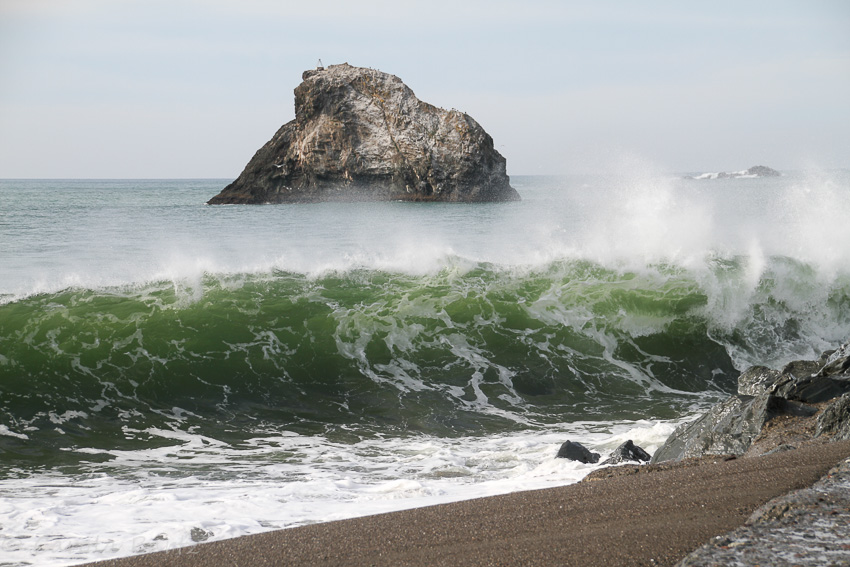 At the beginning of Januar, when we experienced the milder days of winter and Kaefer was still at home, she and I decided to go to the ocean and spend a few hours at Goat Rock, our favorite beach. The Russian River enters the Pacific Ocean here and the beach is like a spit of land between the two bodies of water. 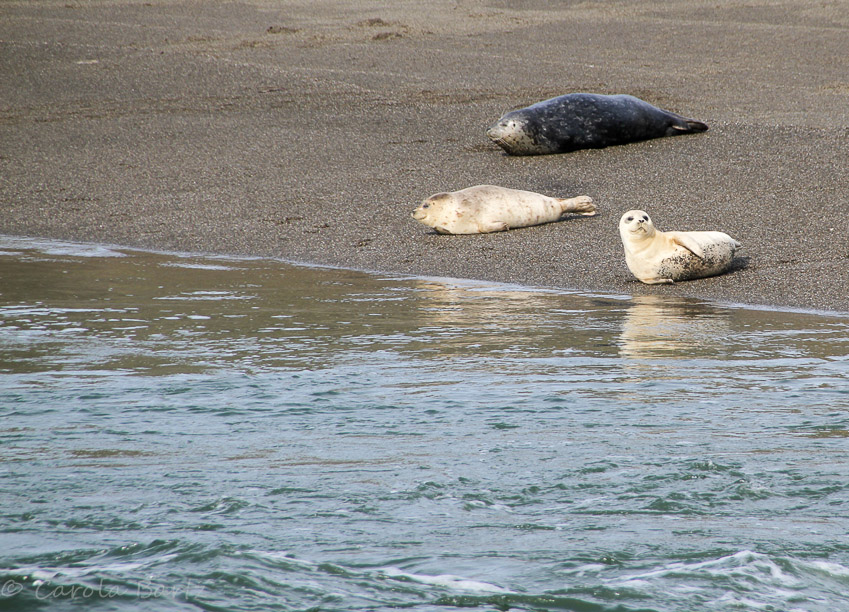 Where the Russian River spills into the ocean the seals like to hang out, Not just two or three but an entire colony. They have their own "private" beach where people are not supposed to go (of course there are always idiots who ignore that), but it is close enough to watch them. I always enjoy seeing them. 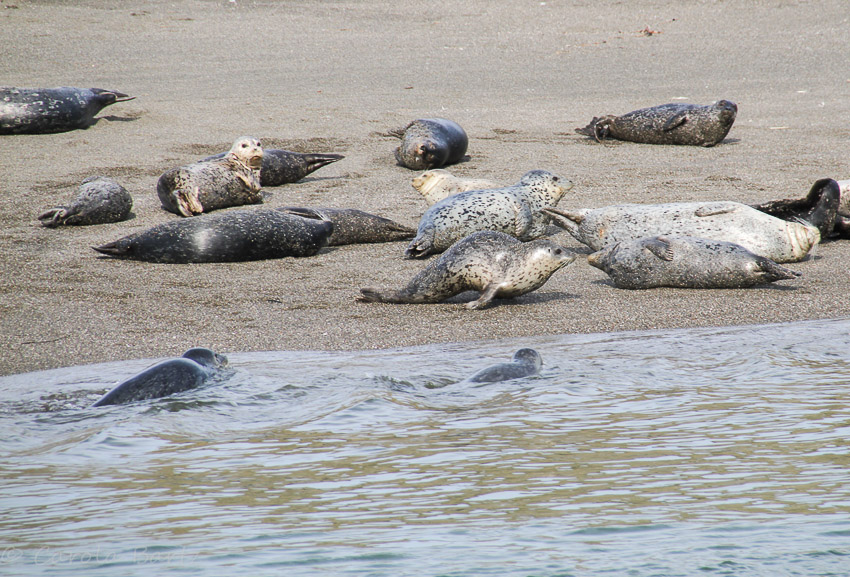 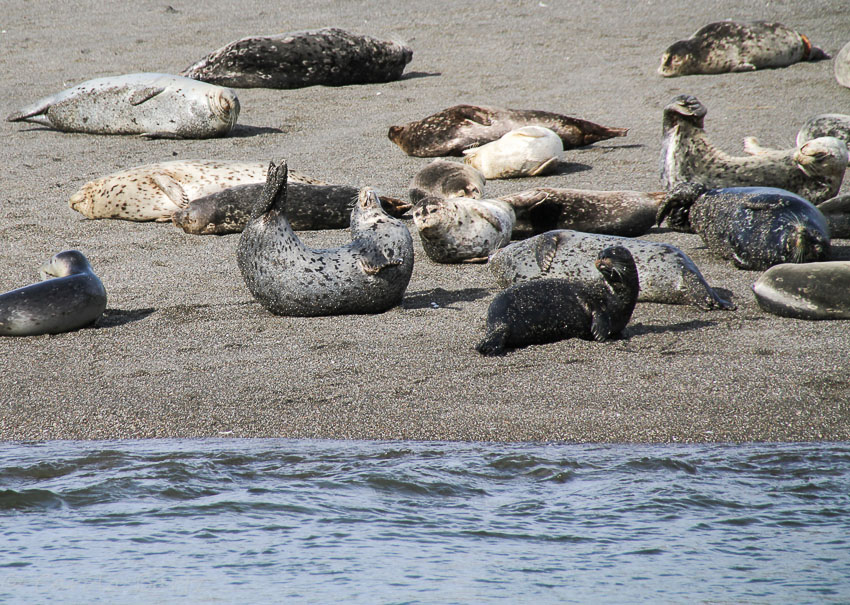 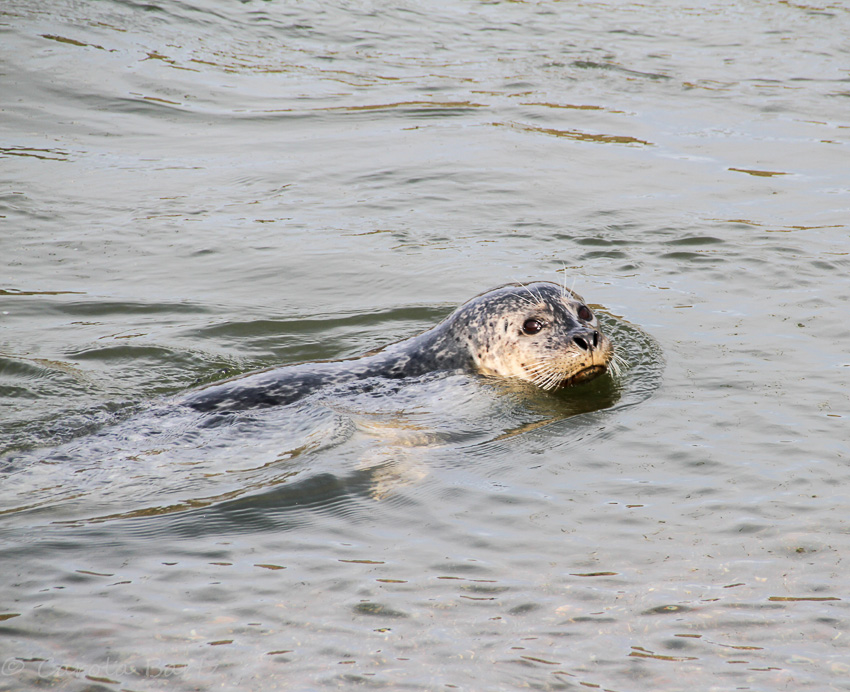 Kaefer who doesn't get to the ocean that often anymore since she moved further inland clearly enjoyed this day at the beach. I simply love her goofiness. 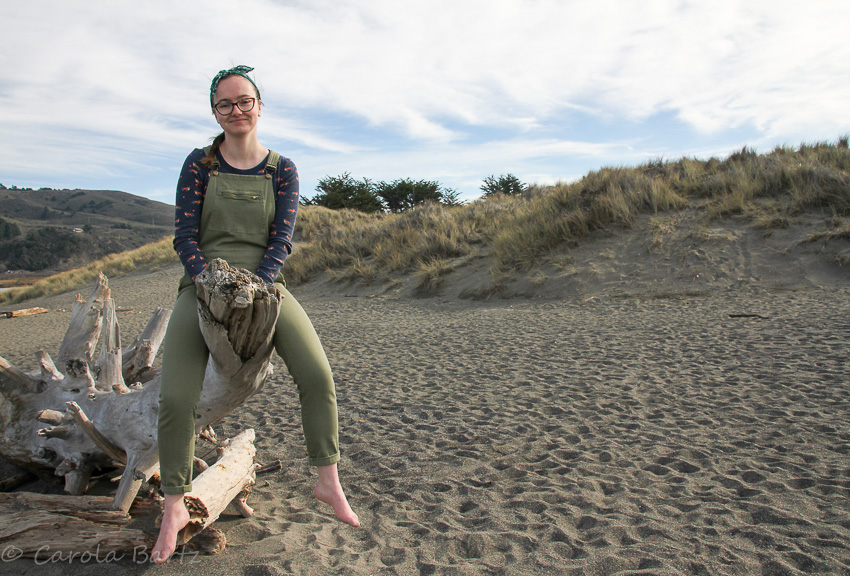 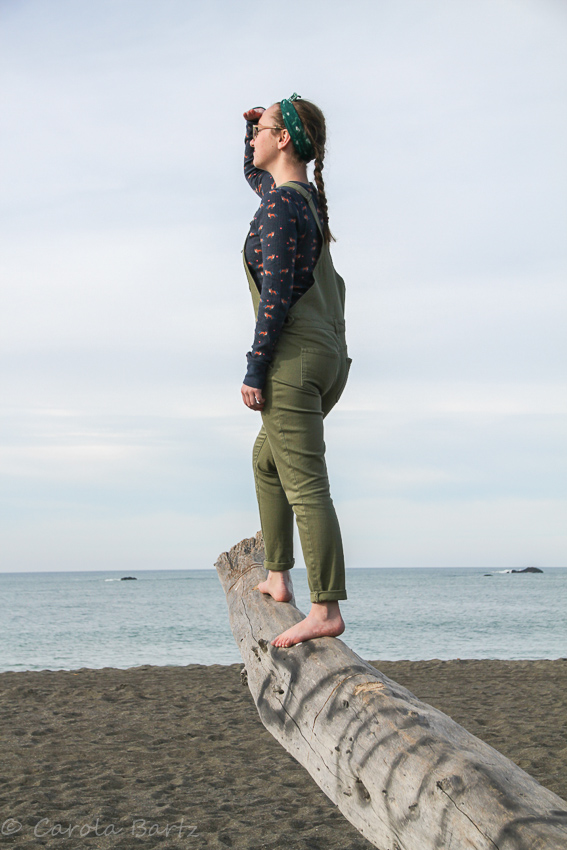 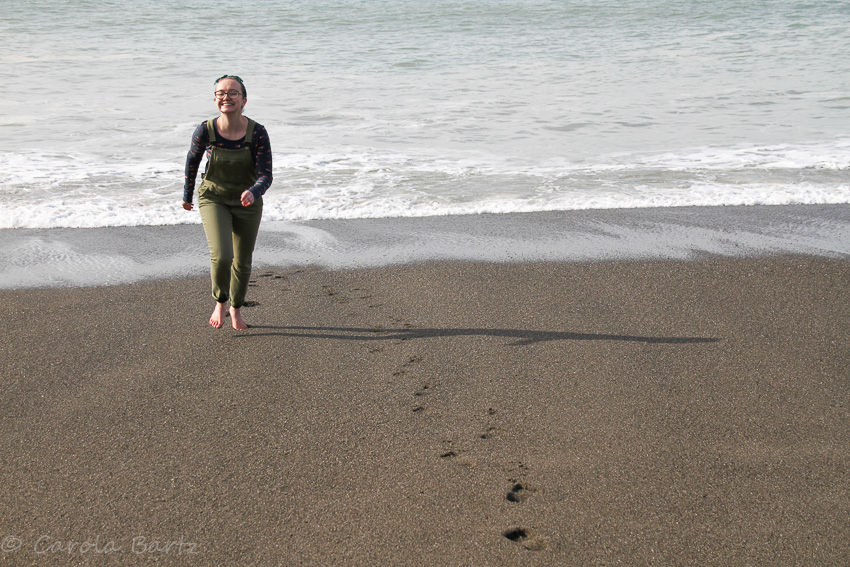 We noticed that there were way more seagulls at the beach than usual, and they were very active, flying in a huge flock, getting back to the beach and taking off again. It was a constant come and go accompanied by the typical loud cries that these birds make. 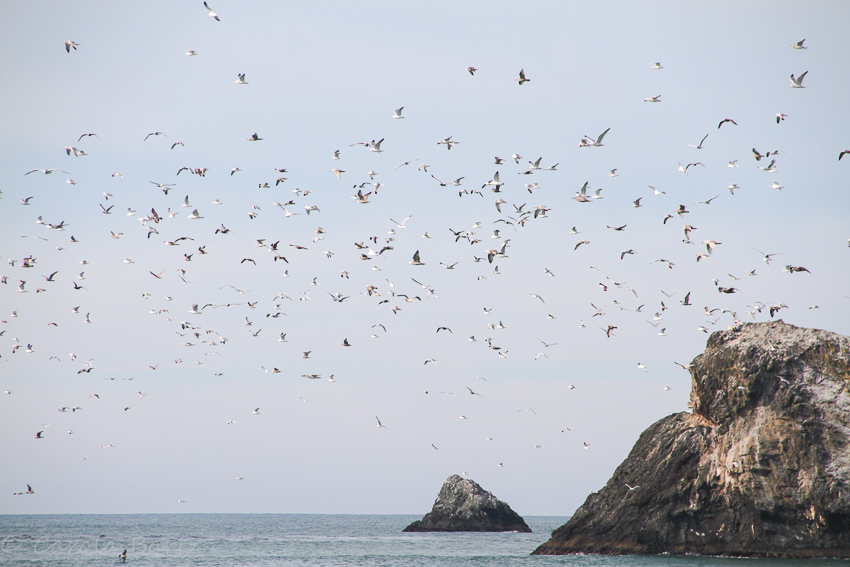 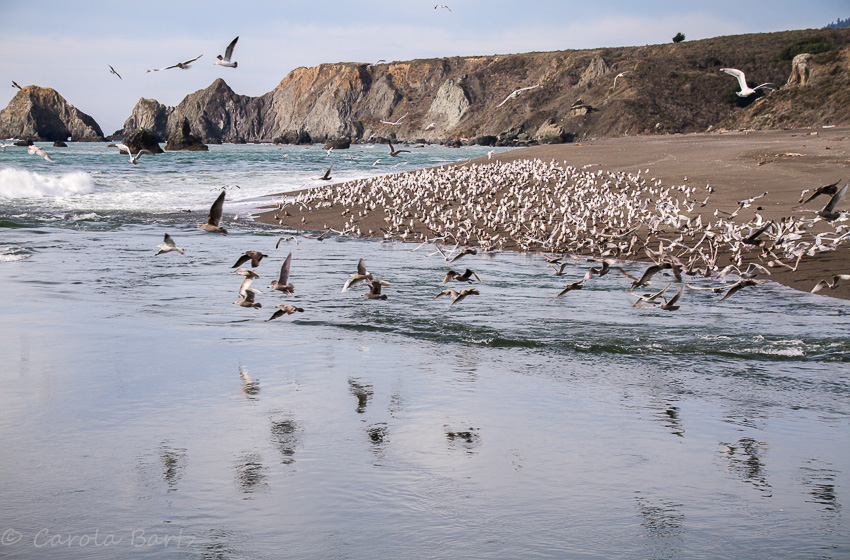 Just a few hours at the beach - walking along the shore, looking for driftwood and shells, watching the animals, taking photos - always centers me. We are very lucky to live so close by the Pacific Ocean. 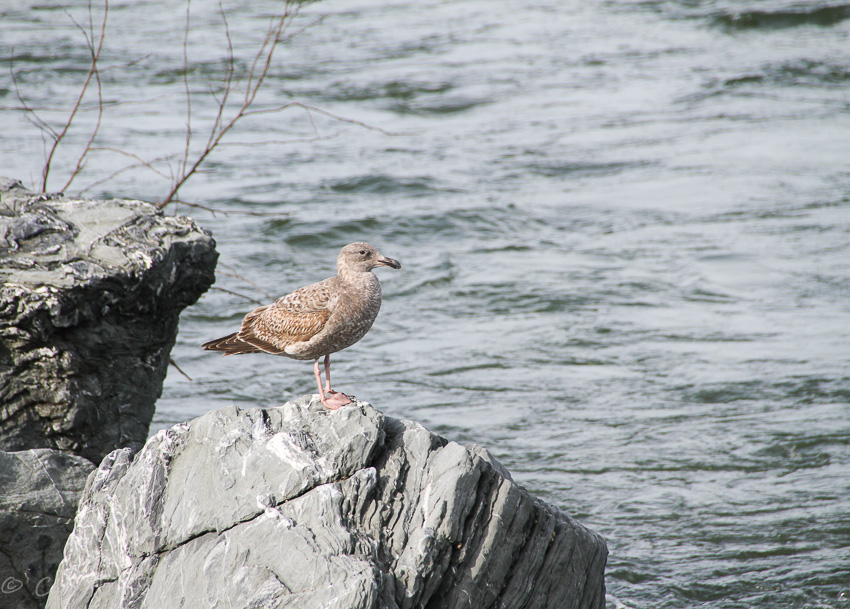 Beautiful scenery! What a perfect place to spend a few hours relaxing, enjoying the wildlife and amazing sounds of nature. The seals are adorable. It is fun making eye contact with such wild animals.

It really looks like an idyllic place, and I am sure that it is delightful in all its seasons, whatever the weather brings. The experience of nature there must be second to none.

I envy your accessibility to the shore. I seriously need to move closer to a shore point somewhere!

This looks like a perfect day to me. The beach, your daughter, some sun, some wildlife. Just beautiful.

Beautiful place! You had a great time =)

Oh you are so lucky, to live near the ocean....

Every autumn, we used to go over to Cape Cod for a few days. Loved, loved, loved to be on the beach. Summer people were all gone and it was lovely.

We always stayed in old homes, which had been turned into B&B's. Which was another delight.

But since my husband's eyesight has deteriorated, we no longer can go, as there is big-road-driving, to get to there. Neither of us, drive on big roads, any more.

We miss it so. But have lovely memories.

What a great day you had. And with such a cute companion. :-)

Wonderful pictures, I especially enjoyed the ones of your daughter, she must be such a joy.

Those seals are funny fellows, aren't they? I love that single photo of the seal. The white ones are so unique. Wow, I've never seen that many seagulls at one time. One of my favorite birds. Yes, our weather is unpredictable. We're supposed to get more rain this week and into the weekend. It looks like Kaefer had a fun day at the beach. I love her goofiness too. ; )

I can clearly see why that Centers you, it's magnificent!

I have been to Goat Rock! My husband and I went there a few years back during our visit to California. A walk at the beach always centers me too. I love the sounds and searching for treasures. :) Living in the Midwest I don't get to the beach much, but it is a treat when we do.

Fabulous photographs and what a great mix.

This is beautiful, Carola. You really captured all the energy, magic and sounds of the shore.

Truly love all these photos! Your daughter is so adorable! Big Hugs!

It's amazing how a day like this, reconnecting with nature, can be so centering! It looks as though you had a wonderful day and you got some amazing photos!