Misty Morning at the Lake


Last Wednesday, the day after the first anniversary of the October wildfires, I had the deep desire to get into nature, to walk around the lake. It was a misty morning, so different from a year ago, and I enjoyed the cool clear air. It's always been a favorite place of mine, but this morning I enjoyed it even more.

The moment I got out of the car I was greeted by a flock of turkeys. 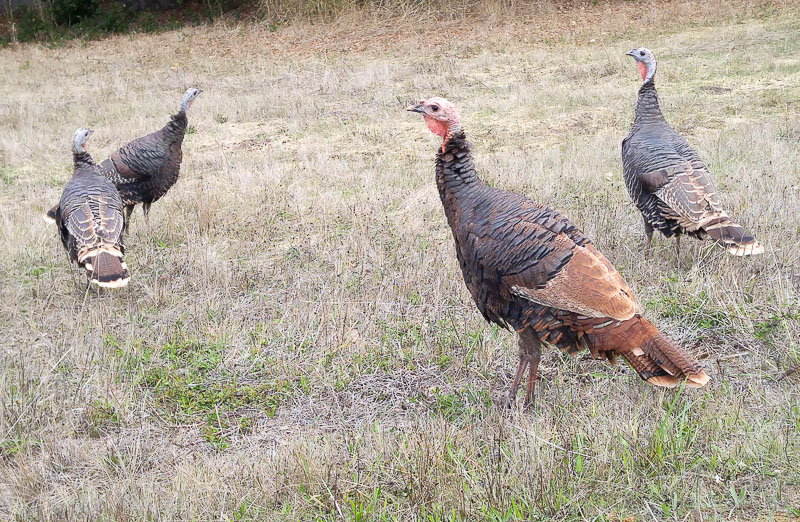 They love to hang out here and this is not the first time that we have crossed each other. They usually keep to themselves and that's what they did this morning as well.

I chose not to walk around the lake along the paths I normally take but decided to wander along the narrow trails away from the popular path. It is here that I have found my favorite spot, where I sometimes sit and write in my journal. 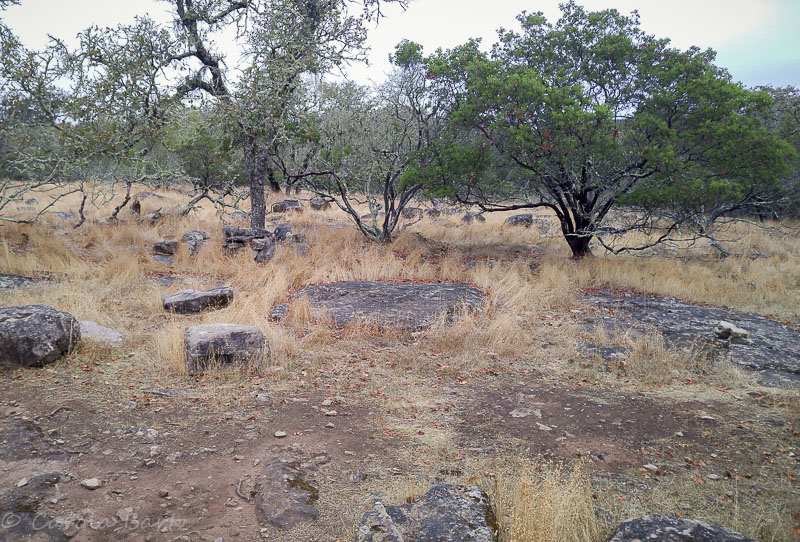 It doesn't look like much, especially on a gray morning, but this is my personal slice of heaven. It is quiet here except for the continuous chatter of the woodpeckers that live here. I can hear the Canada Geese at the lake when they take off as well as the call of the Green Herons and the Belted Kingfisher. Lizards like to soak up the sun on the rocks and squirrels chase each other up and down the trees. 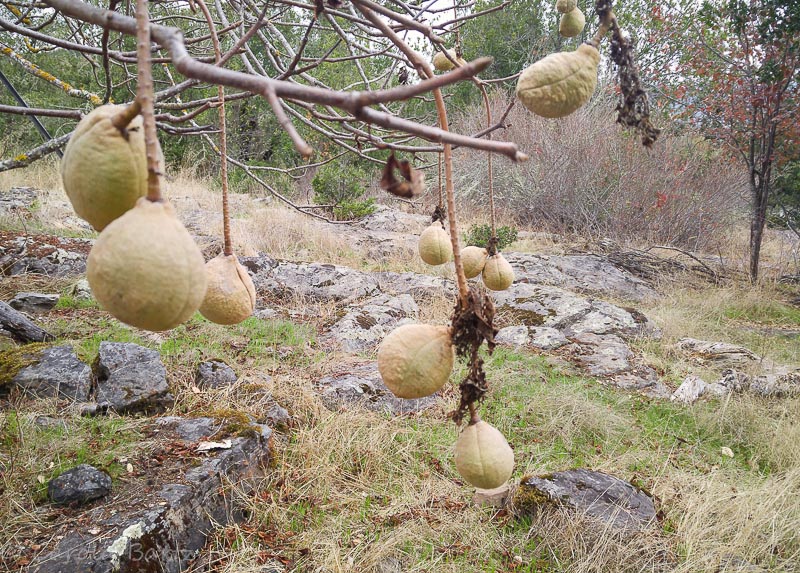 There are several Buckeye trees around, but the buckeyes are still hanging on the tree. In a few more weeks they will pop open and fall to the ground. I love their shiny golden-brown skin. They remind me a lot of the horse chestnuts we had in Germany around this time.

As always the woodpeckers were busy hammering holes in the utility pole that is standing here. I once saw a Red Shouldered Hawk sitting on top of it. While examining it more closely I saw that many holes were filled with acorns. 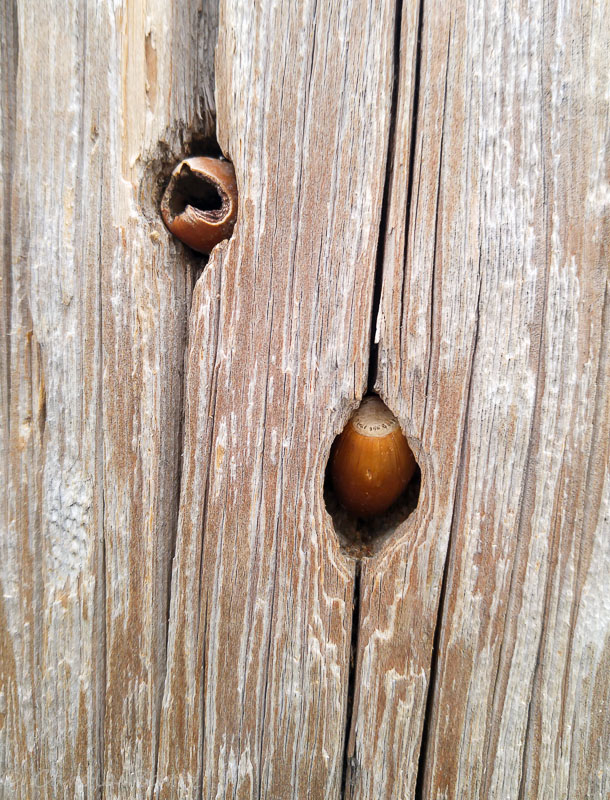 Back at the lake I was happy to see that the park management has hired goats to keep the underbrush low - this is one of the most environmental-friendly way to do it (though not cheap) and one of the best things to do to prevent wildfires. However, chasing or not - the goats weren't there. 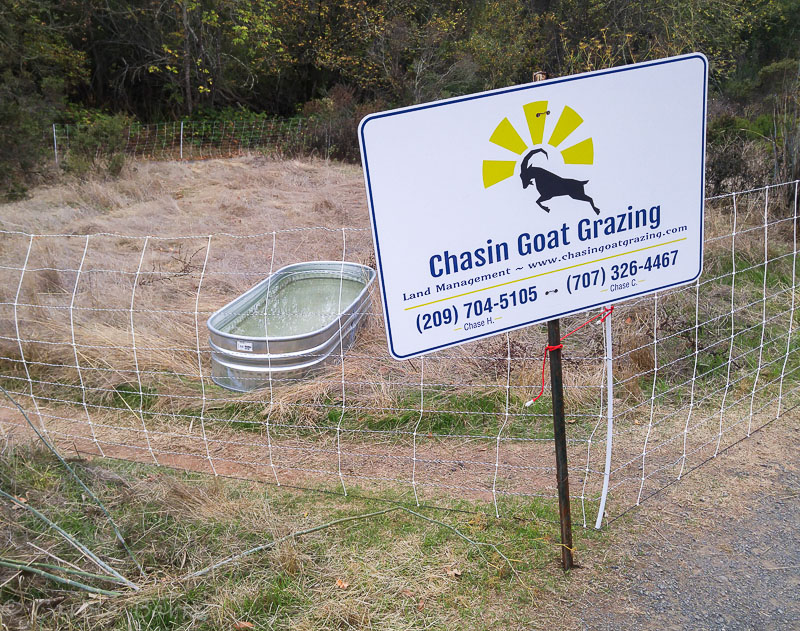 But the deer were - more than in this picture. I have seen them so often - here and in my garden - but it still thrills me every time I see them (not so much in my garden though...). I just love wildlife. 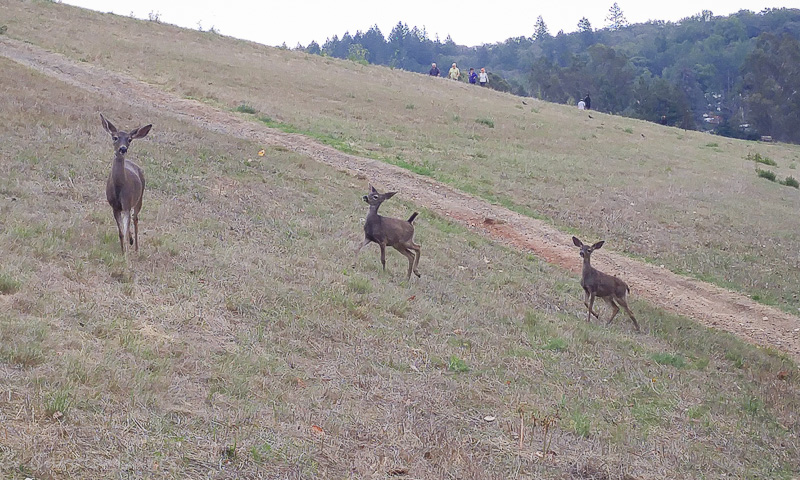 Oh, and the California Quails! I always hear them, they make a very distinctive sound. However, they are quite shy and usually run in the bushes as soon as they hear or see a human approaching. It is lovely to watch them foraging on the ground. They look rather gray, but when you look closer (if you have a chance without them running away) you can see how pretty they actually are. 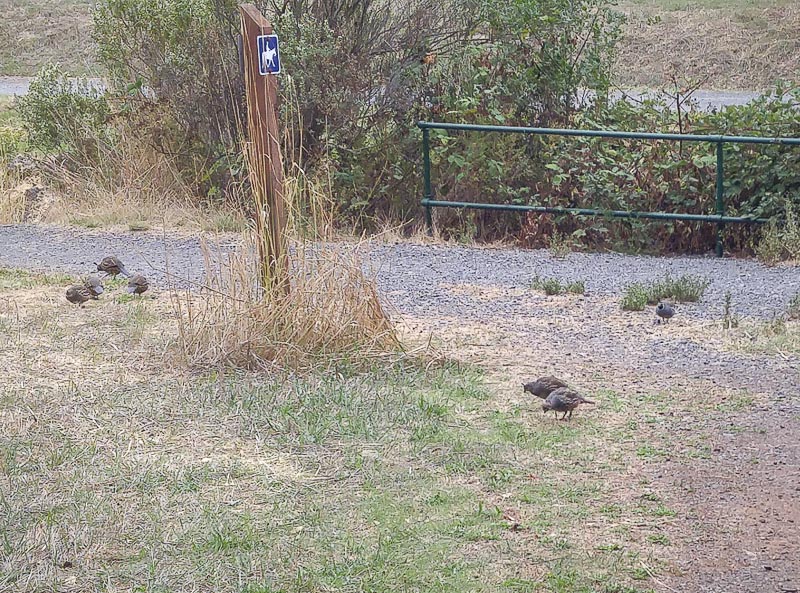 I apologize for the low quality of the pictures. They were all taken with my phone on a rather somber morning. The sun came out later in the day and it became quite hot again. This is Northern California for you - chilly in the morning, hot during the day, cold in the evening. And I love it. The first anniversary of the fires the day before was quiet at the school. My colleague and I had decorated the library with fresh flowers and sparkling lights to make it a welcoming place (it was a safe space during that day for students who were overwhelmed and sad). At lunch we had therapy dogs coming in which is always popular with the kids. A few students came in during the day to talk to a counselor, but all in all it was a rather uneventful day. We were all thankful for that. 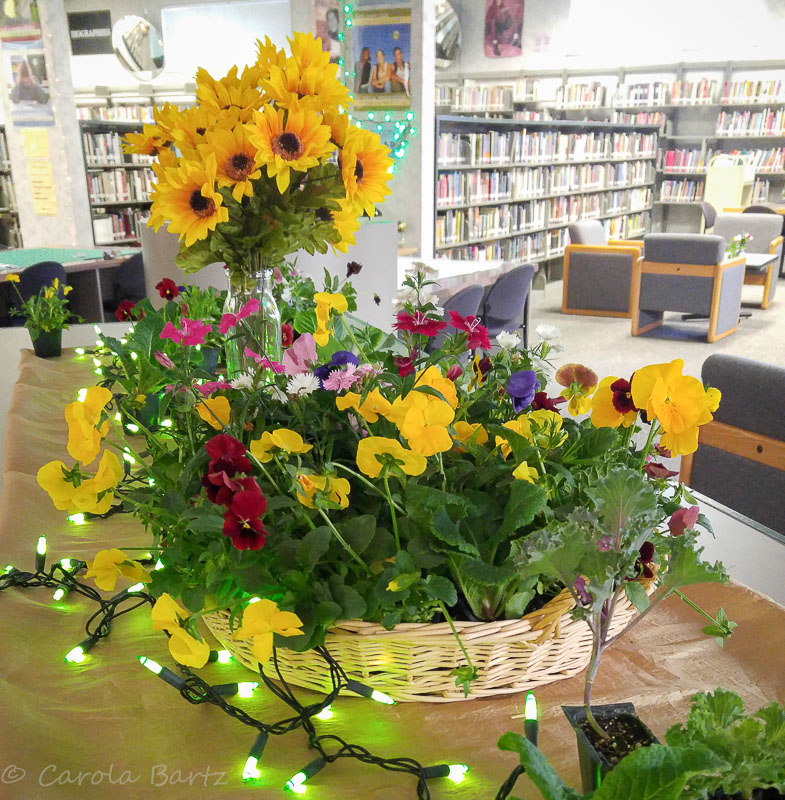 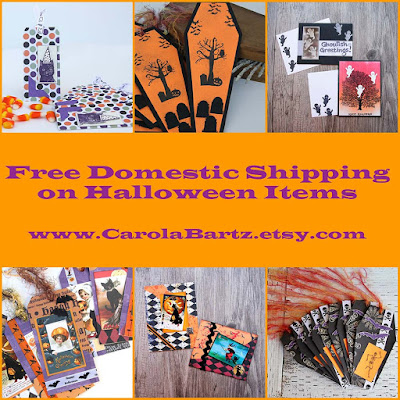 You ended this perfectly with the burst of color. Truly a bright spot in a rough year. Of course, I love all your pictures from the lake, it is real life.

I loved seeing all your photos of the walk. Those acorns in the pole were something else!
You did a beautiful thing decorating the library, it did look so welcoming and peaceful. I can imagine many people appreciated it.
Good thoughts :D) xx

Truly loved all the pictures! That's so cool about the goats! The acorns in the tree are so cute! I can't believe it's already been a year! I love the flowers and lights for the day of remembering! Big Hugs!

Oh, I love to see those turkeys around here. They sometimes wander in the neighborhoods in my area. The California quails are pretty. What a sight it must have been to see the deer. This is such a special animal. The library looks cheerful with the yellow flowers. You decorated it nicely. Enjoy the rest of the October days, Carola.

It has been one year of that dreadful fire!