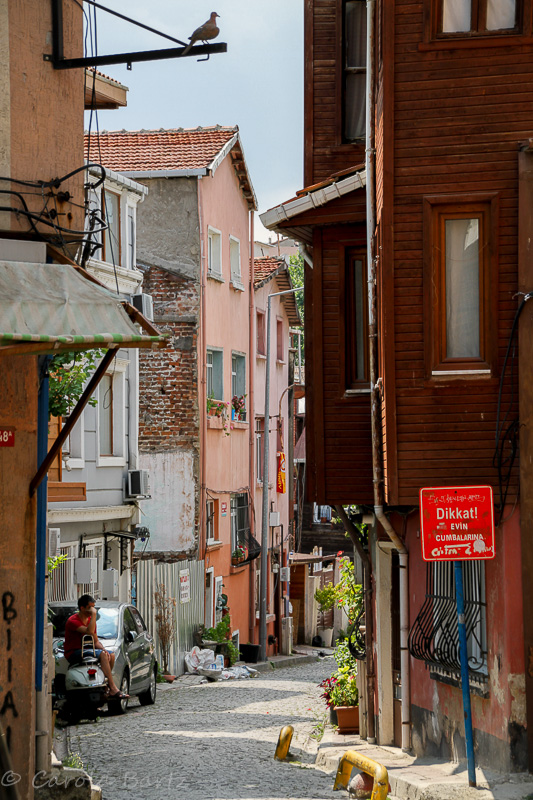 Istanbul is an ancient city, and while we were there we also explored some of the oldest neighborhoods. Sure, it is a must to see the important landmarks, but it's while walking along those narrow streets and alleys that we tasted the flavor of this magical city.

The Küçük Ayasofya - Little Hagia Sophia - neighborhood is one of the oldest neighborhoods, making up what was once known as Constantinople, the capital city of the Byzantine Empire. Everywhere you look there are old walls and narrow paths, little alleys and steep stairs. 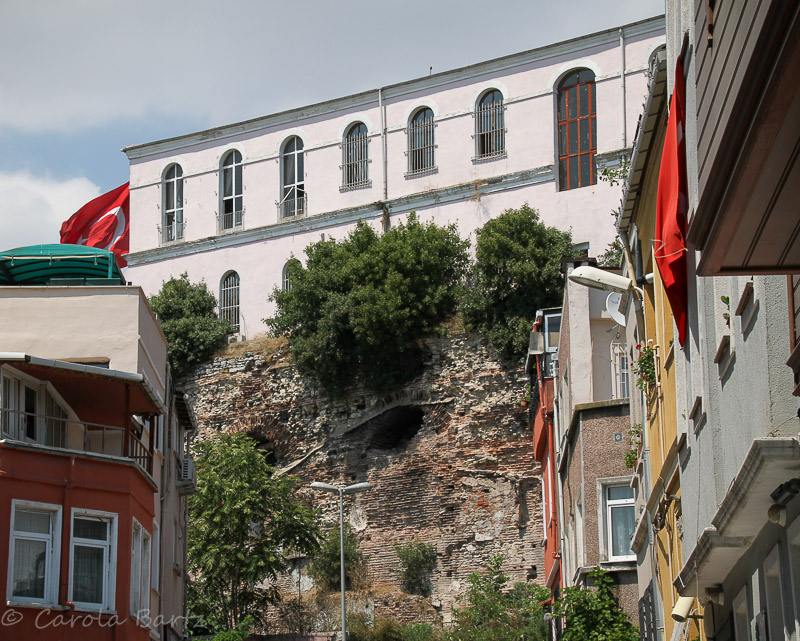 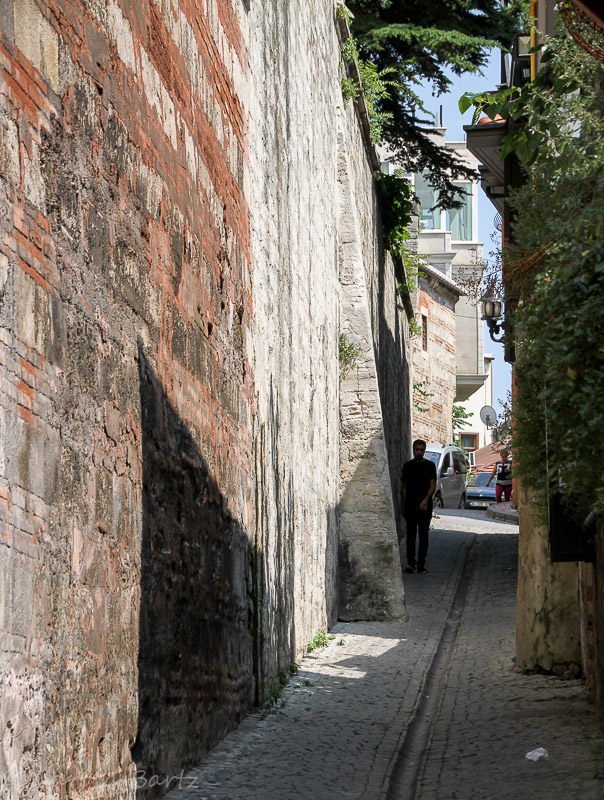 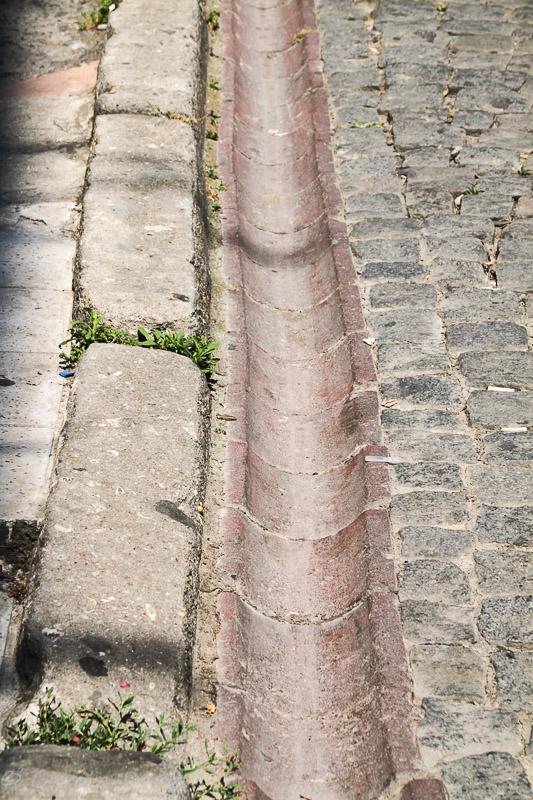 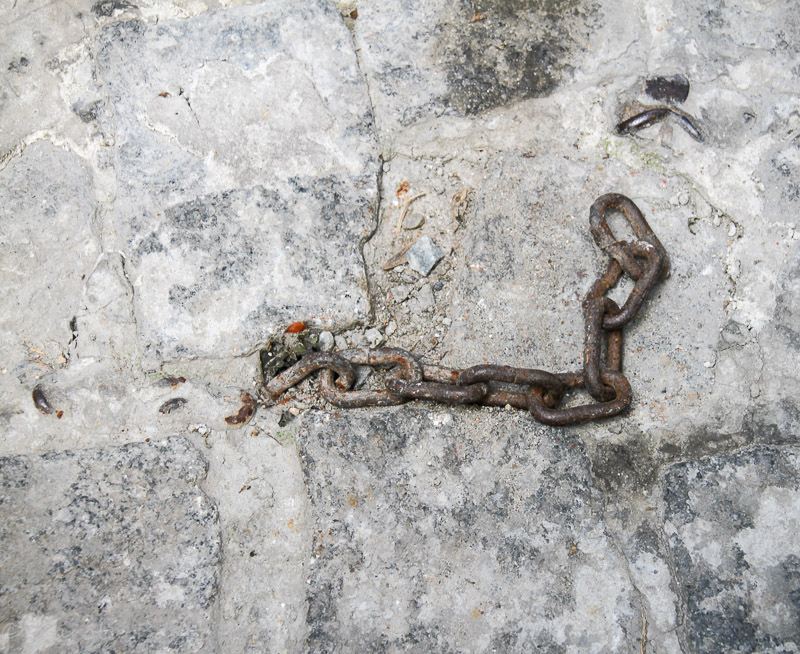 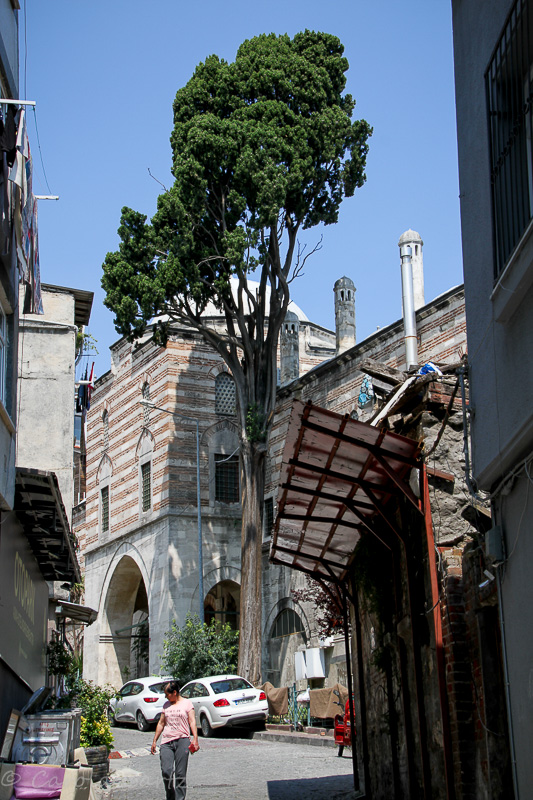 The Little Hagia Sophia looks a bit like her big and famous sister. However, it is so much quieter and calmer, almost no one is here and it lacks all the glamour and beautiful art. The courtyard is an oasis of silence; I don't know about the interior of the mosque since I only had one scarf with me to cover my head, but not to cover my legs. My dress barely fell to my knees and thus was too short for visiting a mosque. Good thing the Geek was wearing long pants and therefore was allowed to peek inside. 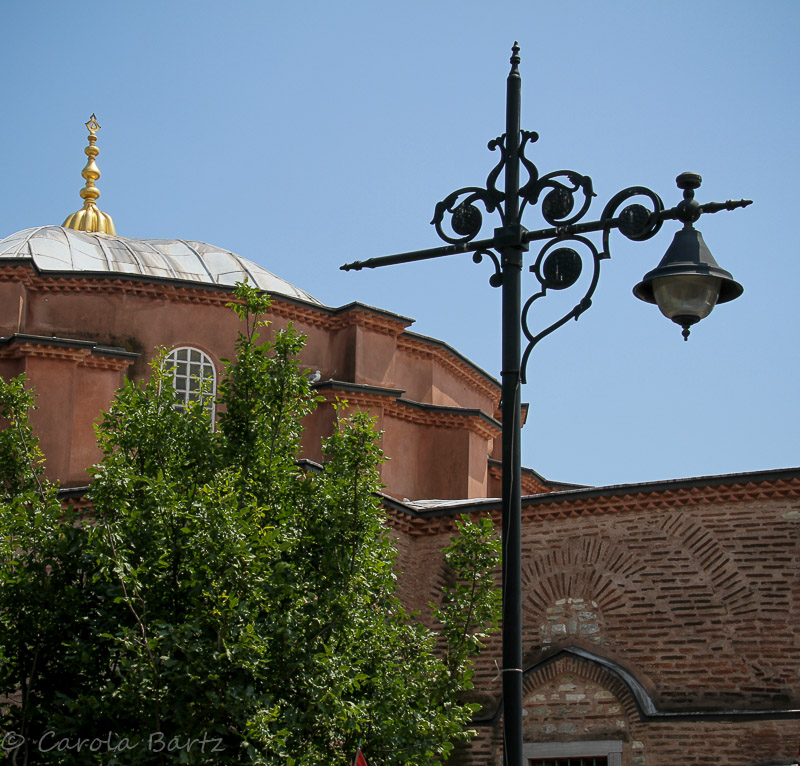 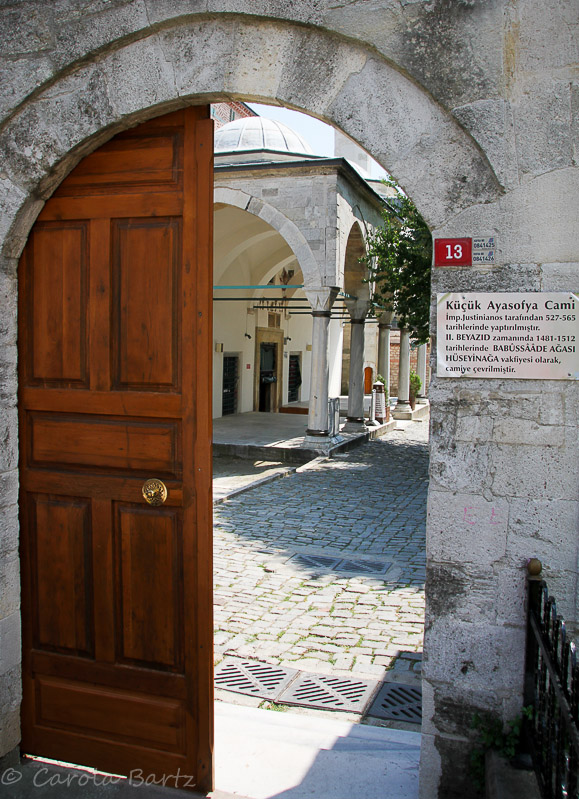 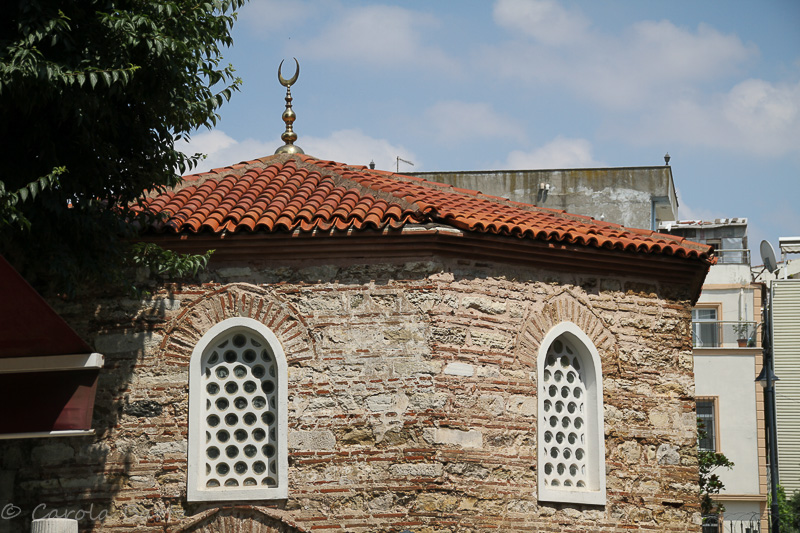 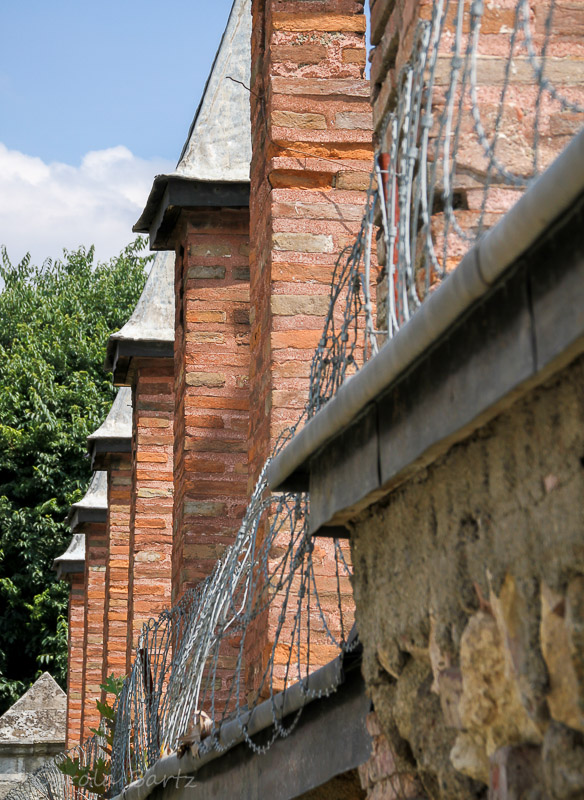 Wandering along those streets, alleys and paths it seems we saw something interesting or "exotic" every few meters. It was hard not to stop and take pictures. 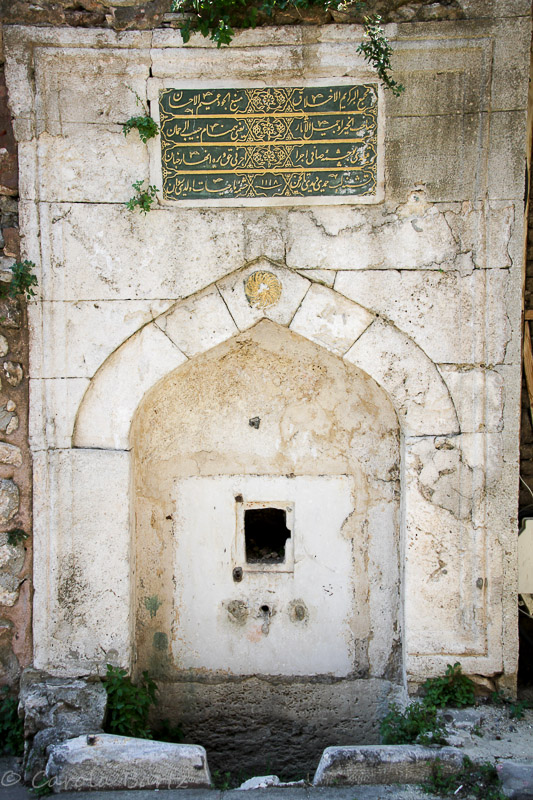 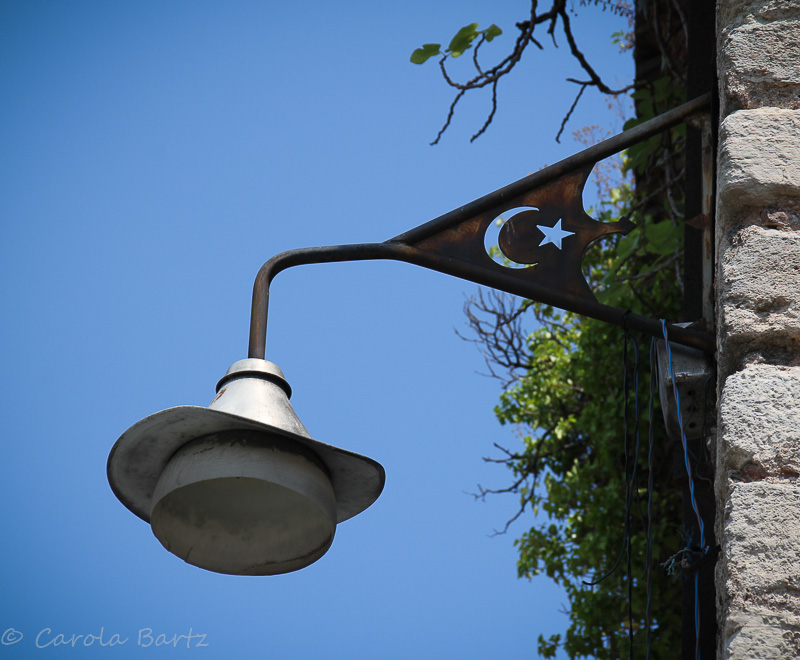 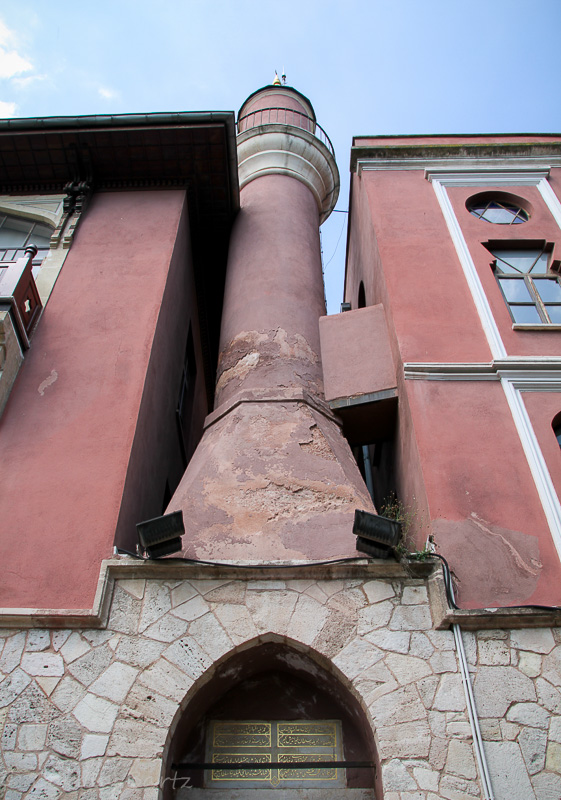 Oh the doors - so many old and beautiful or just interesting doors! I seldom took so many photos of doors like I did during those two weeks in Turkey. I could actually write an entire post just about doors. Here are a few of them that we saw in this neighborhood: 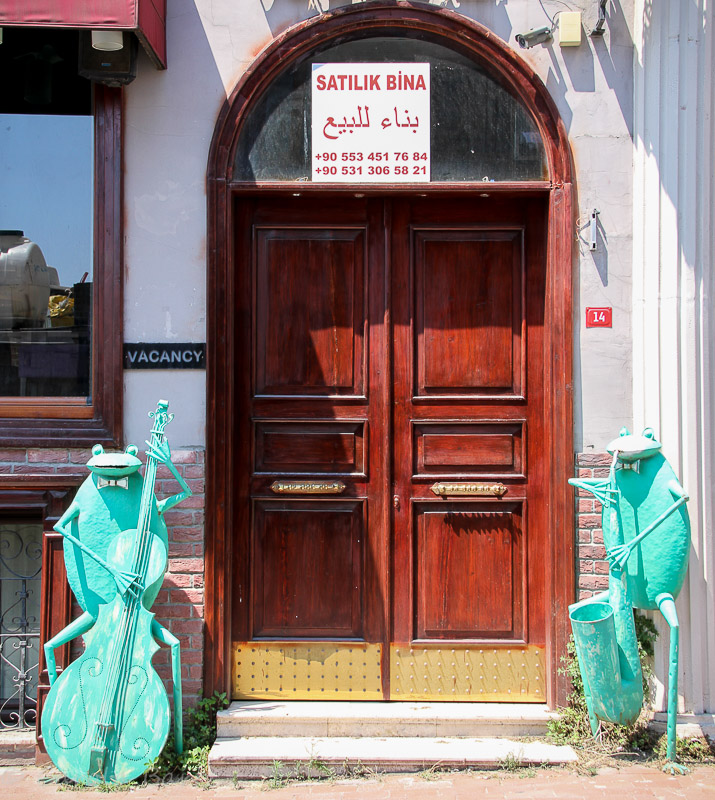 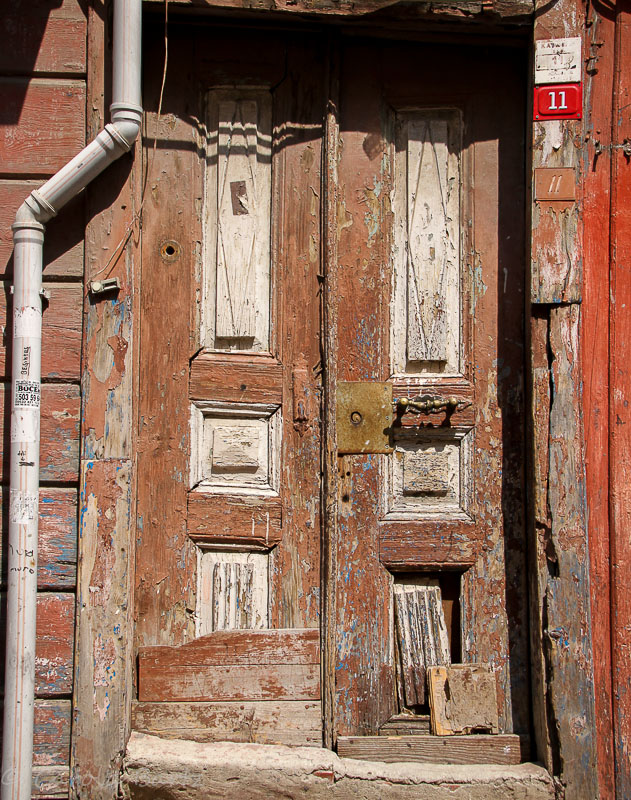 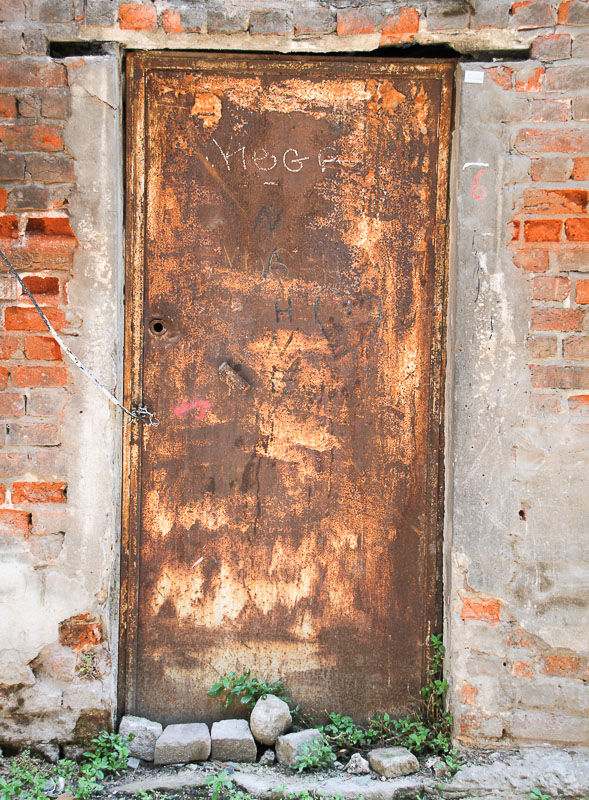 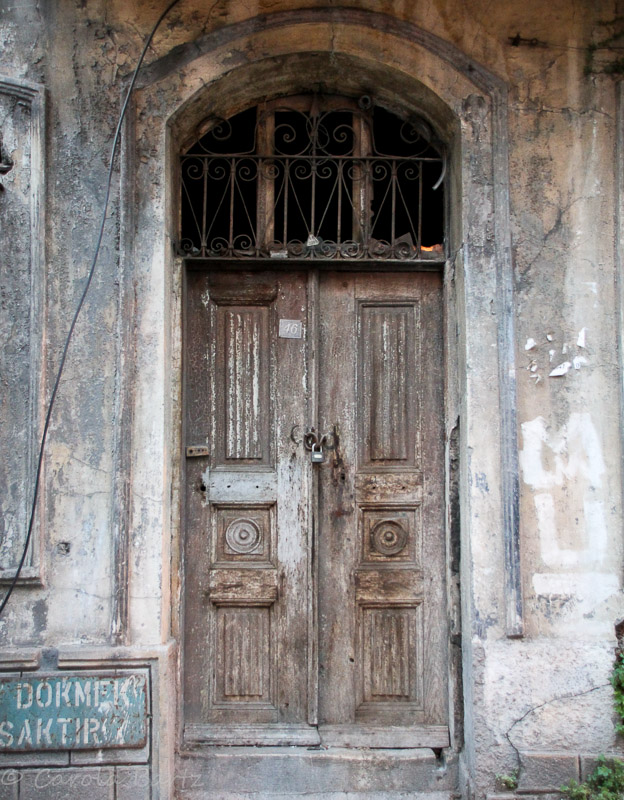 The old wooden buildings were fascinating. Old Istanbul used to consist of these wooden houses, but many of them were demolished and new buildings were built in their place. However, quite a few are still left, and while some are still inhabited others are falling down and are in a state of deterioration. 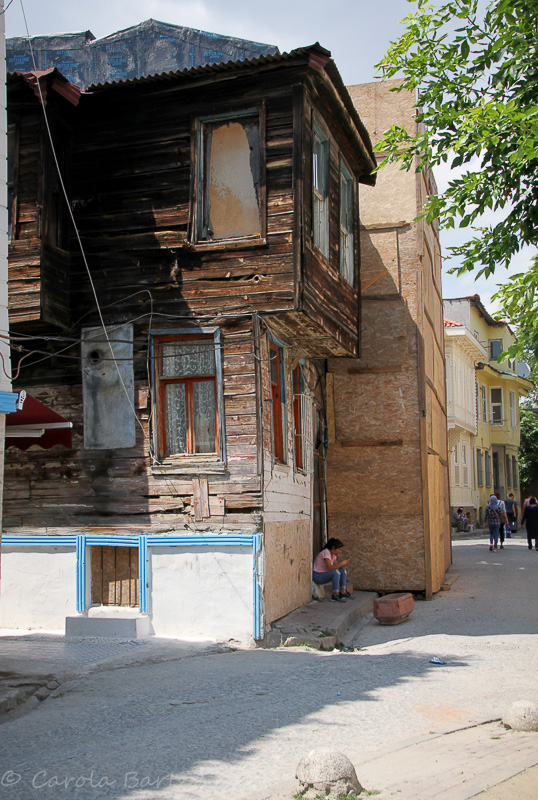 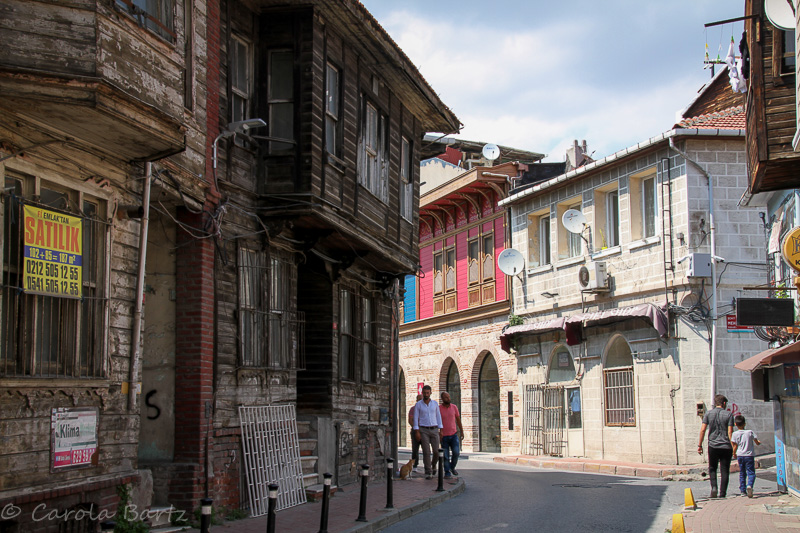 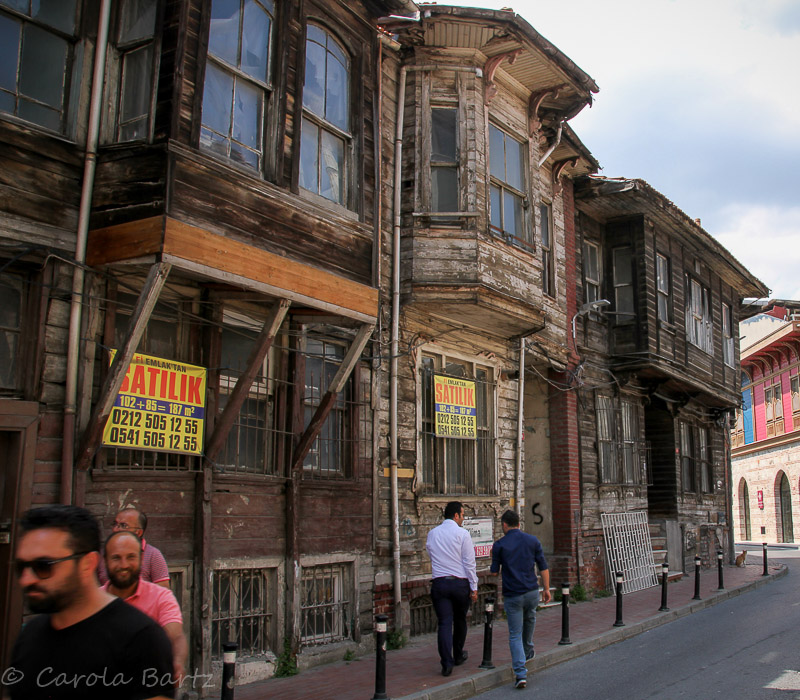 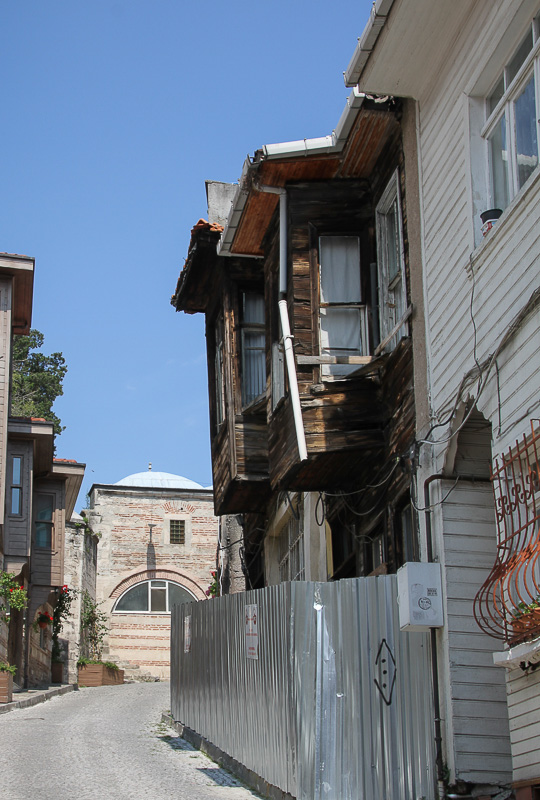 But there are also old brick buildings that are falling completely apart. It seems that no one cares about them - there aren't even "for sale" signs. I'm pretty sure it would be interesting real estate for investors, but probably also not quite cheap to fix everything up. As you can see, some buildings are lovely on the ground floor with restaurants and street cafés, but when you look up you see a building that is slowly falling down. You might wonder about building codes... and it does remind me of images of bombed cities. 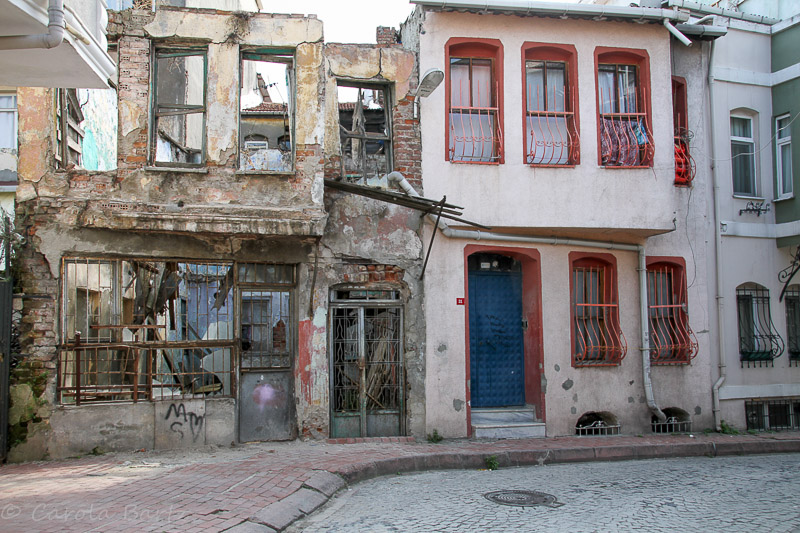 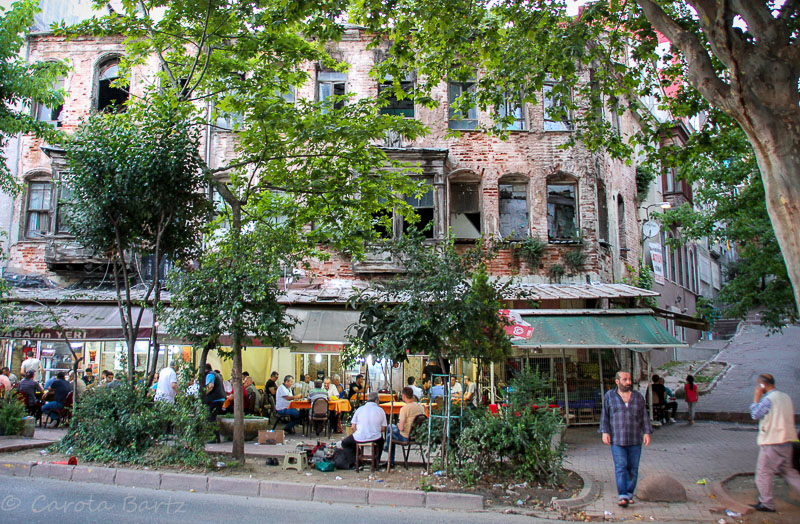 As it is so typical for Mediterranean countries people hang their laundry just outside their window or across the street. Always a sight that I love and enjoy. No one is ashamed to show their underwear! 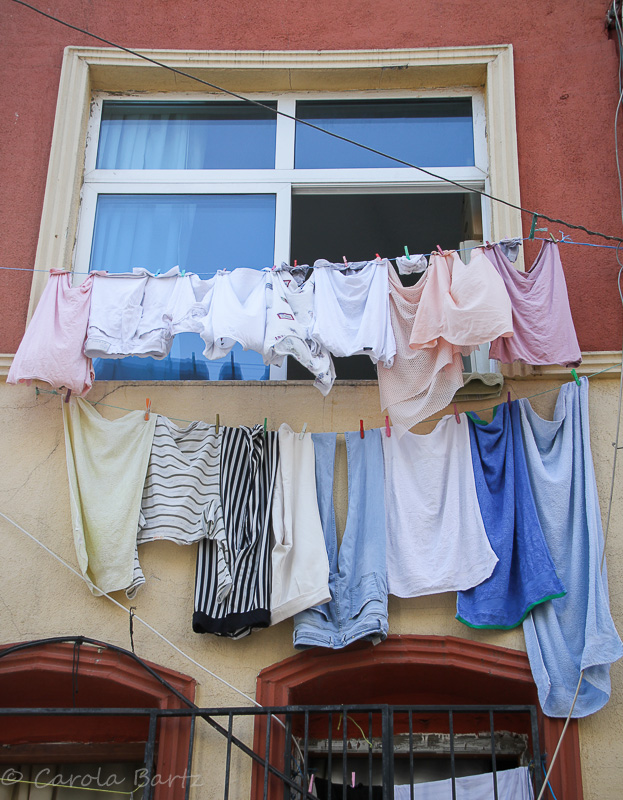 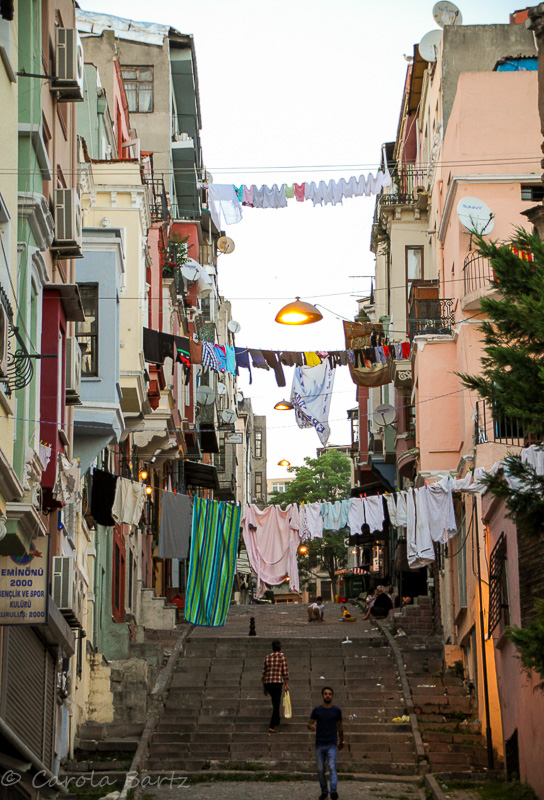 After all this walking up and down this neighborhood we deserved a delicious meal of köfte, kebab and eggplant with some refreshing Ayran on the roof terrace of a small restaurant, enjoying a great view of one of the many mosques and the Sea of Marmara in the background. 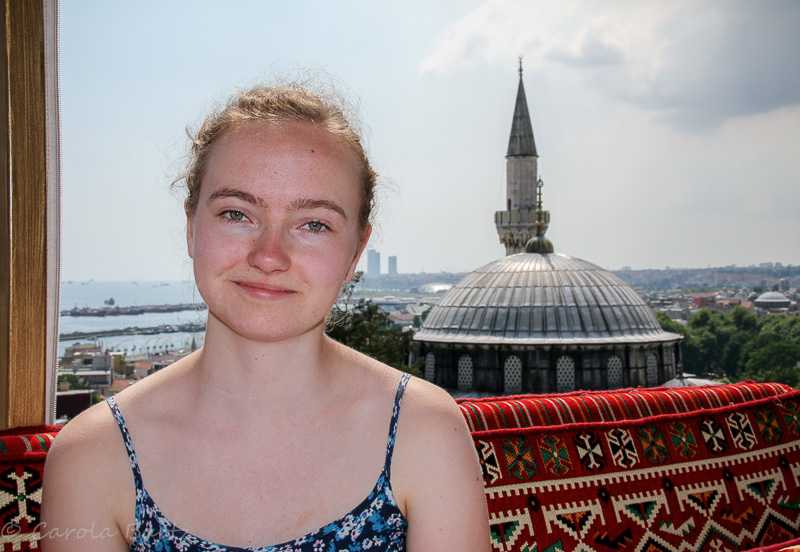 How absolutely beautiful. I suspect I would have developed RSI of the shutter finger.

I love old neighborhoods and you have captured these beautifully! LOVE seeing the laundry and all of the old doors!

How cool. That is what travel adventures are all about.

Absolutely amazing pictures of a wonderful old city. I, too, love doors.

Though many Turks live in the Netherlands, Carola, I have never really had a desire to visit their country (too many reasons to go into here), but I must say that your images are compelling and tell a story. The Wabi Sabi reminds me of what Robin would show. I love it!

Wonderful pictures . . .
I love the old neighborhoods of old villages, towns, cities.
Especially all the stone.

It's been lovely exploring all through those streets with you Carola.
Finding the true character of a place is where everyday life is happening.
Those doors!

Beautiful... so many gorgeous old buildings for Sale... those of us who have a penchant for wanting to Save Historic Buildings would be hard pressed to resist! But I agree, some look beyond Savings, alas... but in their ruined state they are still quite stunning.

I would love to walk those ally ways and skinny streets. Love the old wooden buildings, the laundry hanging out and, of course, those beautiful doors!

Have you read the novels of Istanbul writer Orhan Pamuk? He loves Istanbul and captures much about it. Your photos could illustrate some of his stories.

Wow! you have visited Istanbul.. it is very common to dry cloths outside even in all Asian country. I don't think anyone has drier at home. :)

I much prefer the side streets of big cities. They are always more interesting and real. Although I am not sure about eating at a restaurant where the top floors are falling part.

I've always wanted to visit Istanbul and enjoyed your photos very much. How wonderfully liberating to hang your laundry across the street.
Amalia
xo

Truly, truly, beautiful and magical! Love seeing everything! I love the laundry hanging! That was cute! Your daughter is so beautiful! Great photo! Big Hugs!

It's always nice to come across a neighborhood that we didn't know about. This one looks so old. It's been a long time since I saw clothes hanging from the clothes lines. What a sight. It looks like there are a lot of alleys, old buildings, old doors....and I love those turquoise frogs. What a charming place to visit.

Stunning photos. I like each one but... ah, the doors.