Even though I had taken so many pictures in July it was really easy to pick that one photo for this post. It reflects the friendliness and generosity we encountered with the Turkish people. 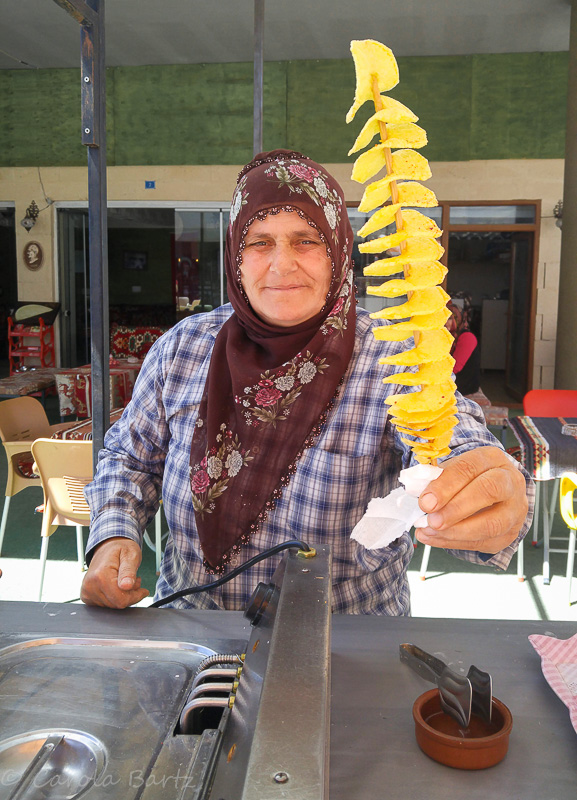 We had just spent the afternoon in Kaymakli Underground City in the Cappadocia area in central Anatolia. It was hot and we felt a light snack and some freshly pressed juice would be just the ticket. Then we saw this woman making gorgeous potato chip sticks. She cut an entire potato in a long spiral, then broiled it to turn it into a "potato spiral chip" on a stick. It was super delicious and just the right thing. She didn't speak much English, but was delighted that we had made the effort to learn a few words in Turkish.

I had forgotten to take a picture and came back when I saw her making one for another customer. I only wanted to photograph the display spiral chips, but she called at me and hold the stick up so that I could take a clear picture of it and her. It was such a lovely gesture - and so typical for the friendliness and generosity of this country's people. It has made this photo my very favorite one of our trip to Turkey.

Email ThisBlogThis!Share to TwitterShare to FacebookShare to Pinterest
Labels: An Image and Its Story, Cappadocia, food, travel, Turkey

I would love to go to Turkey and am enjoying your photos. It does look like a beautiful and interesting place. :)Erika

we have these here in new jersey, usually sold at food truck events!! i can attest to their yummy flavor!!

she looks to be a very sweet woman!!!

That spiralised potato looks amazing and delicious.
I will have to ask himself whether he saw them.
I already know that he DID she the friendliness and generosity of the Turkish people.

This looks delicious and the lovely expression on the lady's face says it all.

Oh Yes, I think the woman accompanying the potato chip stick makes the photo. How nice of her to let you take the picture, and I like that scarf she is wearing. Such a clever and Yummy treat that the Turkish people make. : )

Gorgeous photo, Carola, glad you enjoyed your time in Turkey. The people are really friendly and hospitable there. The potato snack looks great! Hugs, Valerie

A wondrful photo, Carola. It sounds like you had a wonderful time!

Those chips look so yummy! I am so happy you got this picture! I love her eyes! Her face! Her soul is shining! Big Hugs My friend!

Your posts on Turkey are wonderful! Seeing the Asian part of Anatolia is really remarkable. In Istanbul, it's too bad you couldn't see the entire Blue Mosque. We saw the mosque and also enjoyed shopping in the nearby area of small shops: we are still enjoying the rug we bought from a dealer who was recommended to us as trustworthy and having good merchandise.

Yum, yum. The one thing I cannot resist is a potato chip (or 20) cooked in olive oil. Or dusted with olive oil before baking. Oh, I'm hungry!

That was so sweet of her, and what a wonderful memory. You captured the woman's warm spirit as well as the interesting snack in your photo!

A wonderful story, memory and fabulous photo. Her face has such character -- it would make a marvelous prompt for a writer, all the detail in her garment, and all. Beautifully captured.