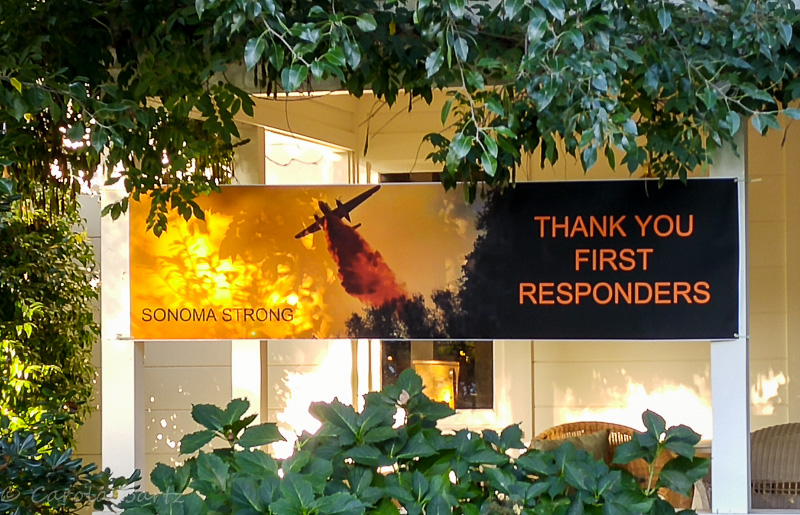 It's been exactly six months when in the very early hours of Monday, October 9th 2017, we woke up to what would become the most destructive wildfire in the history of California. The week that followed was the worst week in my life and was utterly life changing for so many. 5300 homes and residences were destroyed in Santa Rosa alone. The devastation afterwards still leaves me speechless. 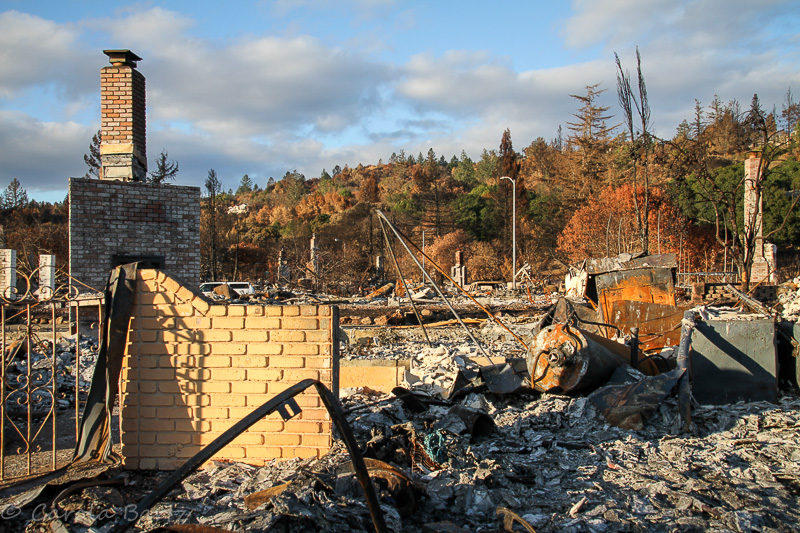 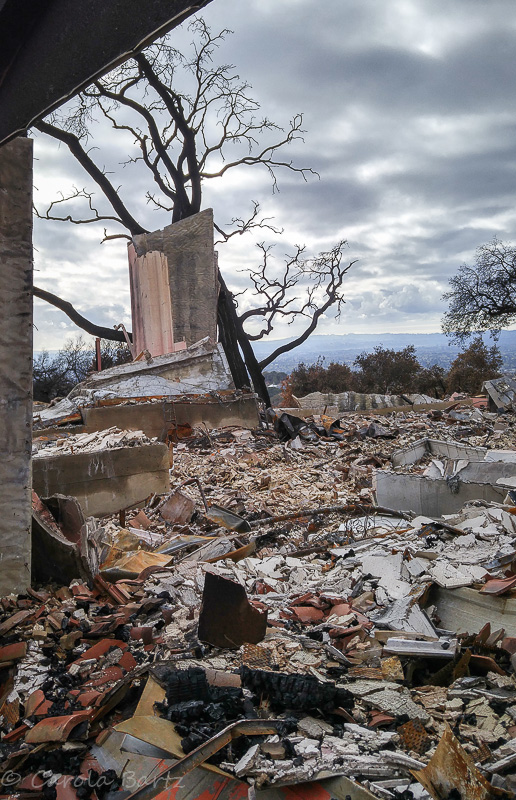 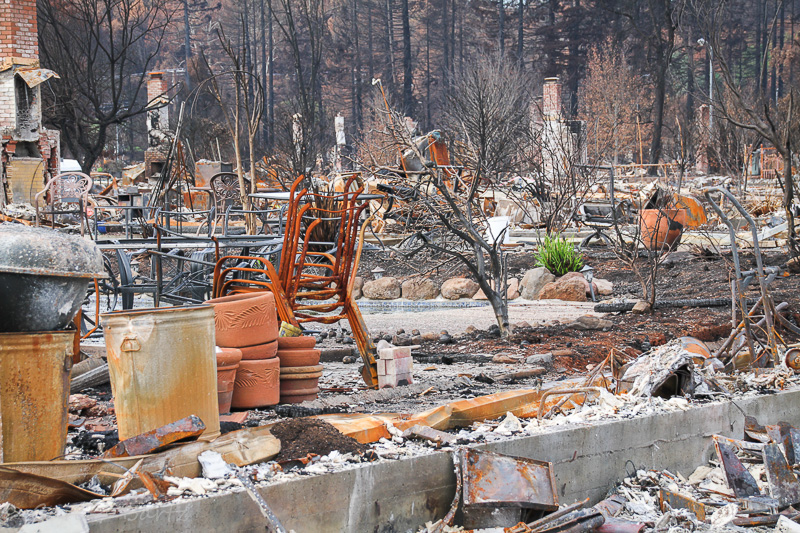 By now, most of the burned sites are cleared and the debris removal is almost complete. Where once used to be homes, trees and gardens is replaced by flat, cleared sites. Some trees are still standing, hoping that they might come back to life. All in all it's a pretty sad sight.

The big debris removal trucks are seen every day, and last month when one of those trucks drove down the hill (too fast?) and its brakes failed there was a rather bad accident involving seven injuries and a fire. This happened at a site that was badly burned during the October fires and for some people it was a traumatic déjà vu.

Here you can see one of those trucks, and the area behind it is our old neighborhood. The red x marks the spot where our old house used to be (I'm still so relieved that we moved a few years before the fire). We have heard that the landlord is not going to rebuild. 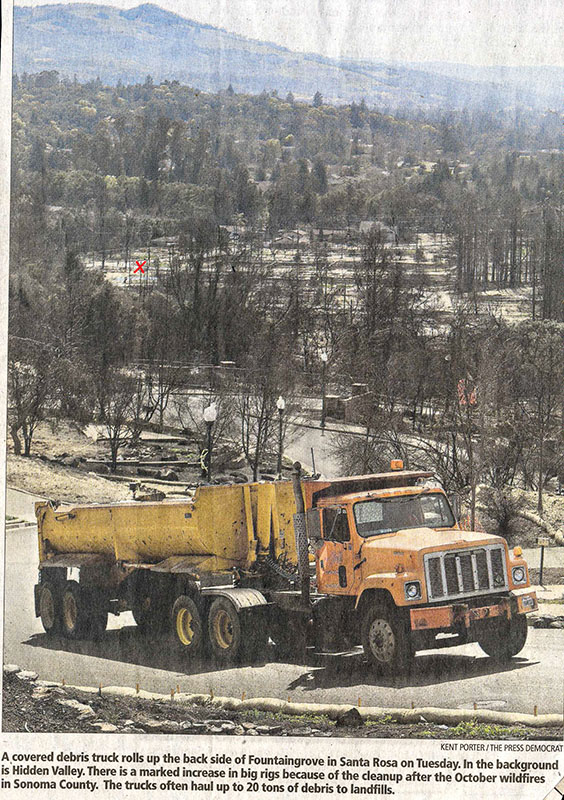 He is not alone. Many people have found out that they have been under insured or rebuilding will be just too expensive. Many lots have gone up for sale. Other people, neighbors in a street, have come together and want to rebuild together to keep costs lower. So far, only one home - in the Coffey Park neighborhood - has been erected since the builders were able to use the existing foundation of the house. This is not possible with most houses since the foundations were removed as part of the government-funded debris removal. However, even if it's only one home, it's a sign of hope. But still there are not even 200 building permits being currently processed since most people are still figuring out how much money they get from their insurance.

Six months later they still struggle. Some insurances have been better than others. It gave me a lot of pause. There also is a lot of price gouging, rents have gone up astronomically and the housing problems we had before the fires have become a serious housing crisis. People affected by the fire have moved away because they weren't able to find a place to live that they could actually afford. 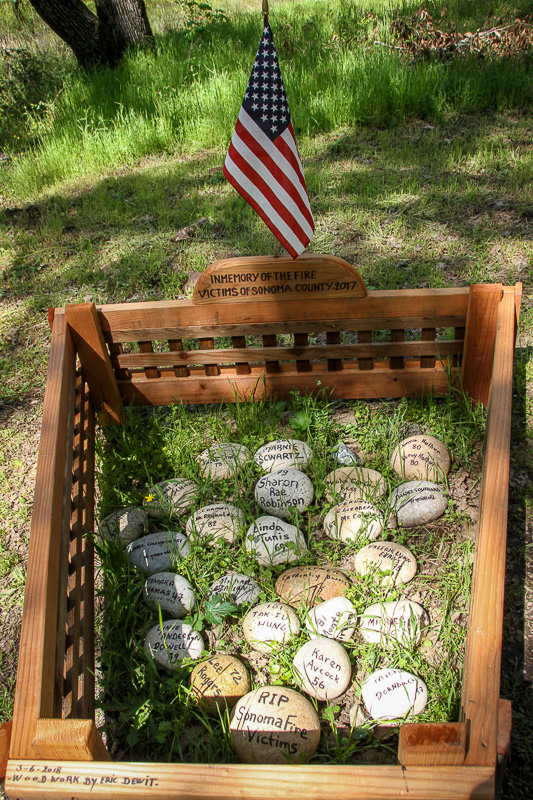 24 people in Sonoma County (43 in all the affected counties together) lost their lives in the fires. For the past six months there has been a debate whether the county could have done more in terms of warning the population (a resounding YES). Officials have resigned over the decision not to activate the emergency system (why oh why?). While everybody agrees that no one could have been prepared for a natural disaster of such dimensions it is also clear that serious mistakes have been made (and hopefully we will learn from them).

Many people have PTSD in various degrees. When the county decided to make steep cuts to the mental health services the outcry was fierce and somehow the money for keeping up these services was found. Mental health issues have increased - I can see that in my school, and as someone said "we're not out of the woods yet" when it comes to the emotional toll of the fires.

The scars in our community will be visible for a very long time.

Nature, however, is bouncing back. Right after the fires the hills were charred and there are still a lot of burned trees in the landscape (they appear orange-brown and black in the photos). 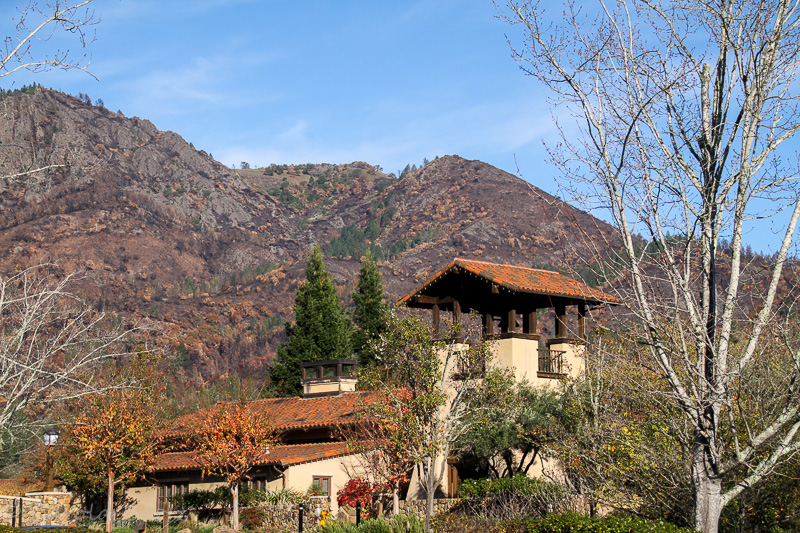 However, since wildfire is important and necessary for California's nature, everything is coming back to life. There are beautiful wildflowers, and plants that need fire for their seedpods to open are making a big return . I think we're in for a huge gift by nature. Looking around the hills and mountains you can clearly see where the fires burned and destroyed, but you can also see all the new signs of life. 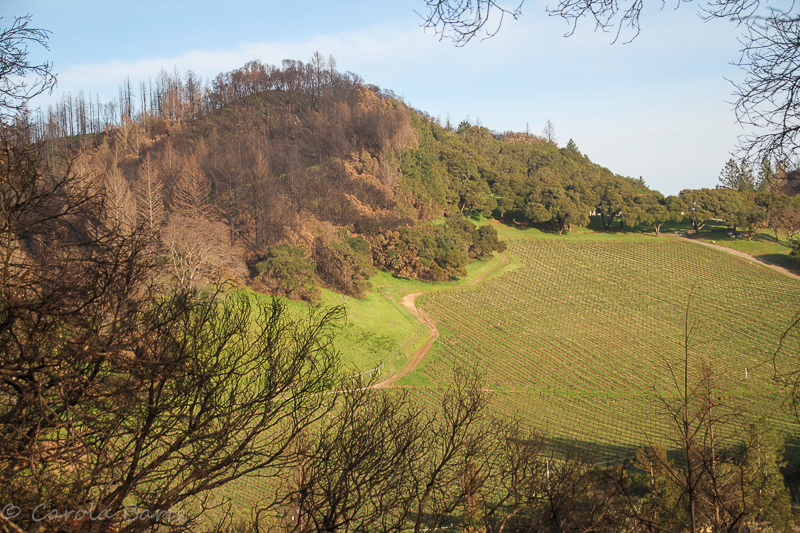 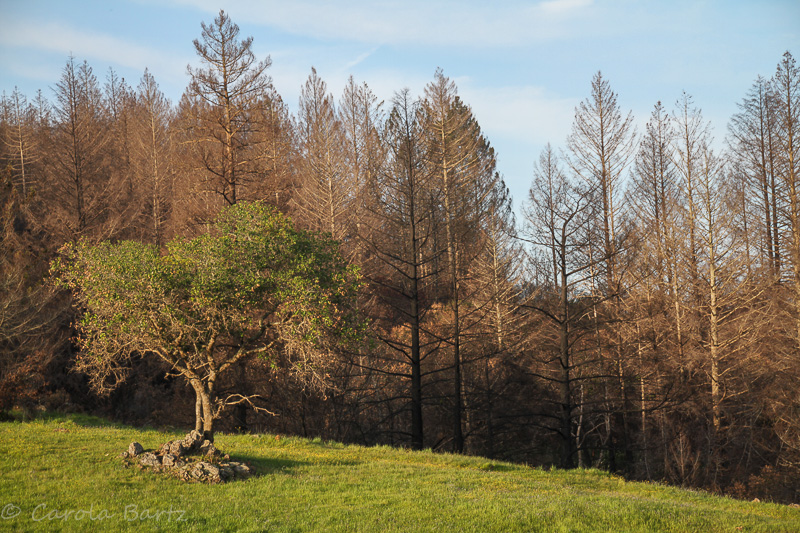 Everywhere there are still the "thank you" signs for our first responders, and I have a feeling that they will be around for a while. These men and women were working tirelessly in some of our darkest hours. My respect for them is immense. 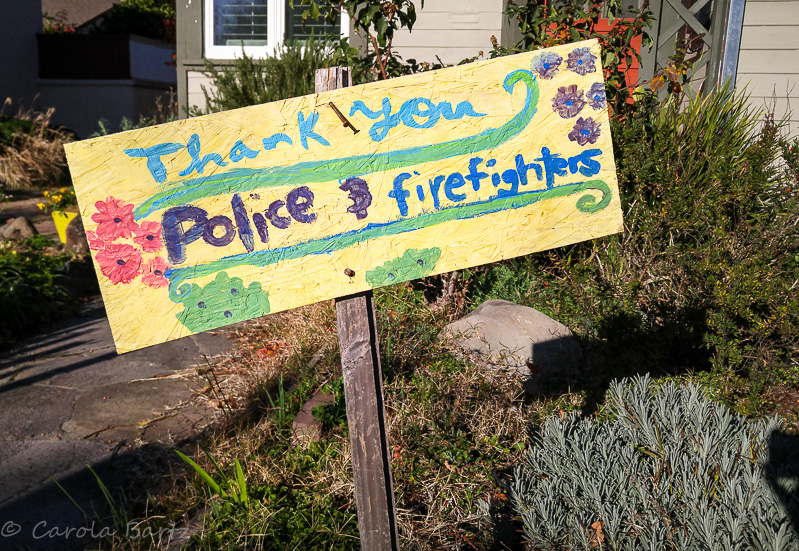 Hope everything will back to normal soon.. hugs

Heartrending. My city was hit by a firestorm twenty-years ago now and tears pricked at my eyes as I read and looked at your post. And I didn't lose my home.
Thank you for a thoughtful, beautiful post.
And huge thanks to Nature who comes back when it seems impossible.

Thank you for sharing this. I can't even imagine.

This was such a tragedy. I'm not surprised at the PTSD. I know this had to be a hard post to write and relive those terrible days, days that for many are as terrible as the fire itself. I'm glad nature is returning to your world but oh, the losses...

It leaves me speechless, too, Carola ... seeing that number of homes lost is just staggering.

thank you for sharing this. I did not know the extent of the destruction. As you said it's good for the environment to have these fires, but not for the people living in the area.........so sad the loss of lives.

Wow, reading about fires somewhere in the world is a lot different from reading about it when it's written by someone who actually lives there. Such devastation, and it's all so easily forgotten by people who haven't experienced it. It must be so hard to lose everything, not just your house and possessions, but also your neighbours and your communities. I do hope the visible and invisible scars will heal over time. It's good to see the signs of new life...

It's amazing how something that happens so quickly can be so difficult to recover from - so very life changing. It must be nice to see some of the signs of new life and I wish the best to those who find themselves unable to rebuild. I find it hard to imagine myself without my home.

Even after reading your post, I can't begin to imagine how it must feel being there and living through it. My heart goes out to all of you.

My heart goes out to you and your community. We lost our home and everything in it in the High Valley Fire (Lake County) a couple of years ago. It is.... no words. I'm so glad your place is still standing and you are supporting your community.

Those first responders will always have our never ending gratitude. They put their lives on the line every day. I was greatly saddened by this terrible fire and the loss of life. And for those who have to deal with such a catastrophic situation afterwards, I wish them all peace and healing.