Looking through my photos that I took in March is pretty pathetic. Before this past week, actually the last four days of March, there isn't a single image I took with my "big" camera. Obviously I was too lazy or busy (or both) and completely lacked the inspiration for any halfway decent photography. In my defense I have to say that my work at the high school currently wears me out, and I'm not even there full time! By now we fully feel the aftermath of the October fires - which comes at no surprise when 10% of the school population has lost their homes. We deal with behavioral issues, lack of motivation, drug and other substance abuse. It drains our energy and everybody seems to be stressed out. I'm often just tired when I come home, take a nap and then start preparing for my Saturday German class. There isn't much left in terms of going out with my camera - even though I know that it probably would work wonders!

But - suddenly Kaefer was here for her spring break, and last Wednesday I went back with her to Davis and spent a few days with her. I took my camera with me and used it, too! Oh the joy!!!

However, the photo I have selected this time wasn't taken in Davis but yesterday evening - literally one of the last photos I took during the month of March. 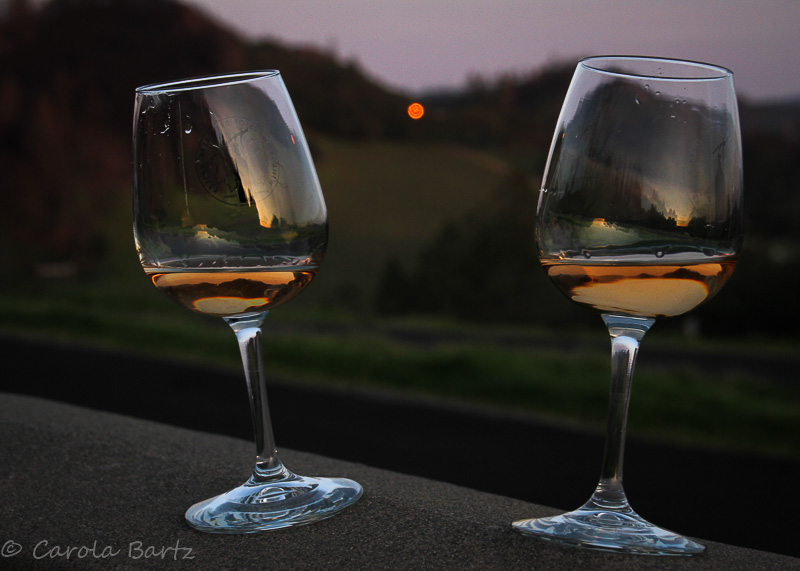 What is this? you might ask. Is she that drunk?

I can assure you, I was not.

We are members of a nature preserve called Pepperwood which is located quite secluded in the hills of Sonoma County. It's one of the most beautiful locations in our area and not open to the public (hence the membership). We have been members since Kaefer did an internship here back in the summer of 2015. We enjoy informative talks, beautiful exhibitions, nature hikes - and wine. For almost every event they bring in a local winery, which is a win-win for both the winery and Pepperwood (I don't think we are the only ones who some time after each event visit those wineries and buy a couple bottles of the delicious wines).

Yesterday we were at the opening of an exhibition about the cradles and baskets of Native Americans, followed by a nature hike in the Preserve lead by a Native American couple (I will probably blog about that some time later). Of course there was a lot of talk about the wildfires and how important they are for nature, how Native Americans have always used fire as a tool and it therefore never got that destructive (until the white people took over with disastrous consequences). Right before sunset we all came together at the ridge for a Native American prayer and chant - to say that it was moving would be an understatement.

And then - there was wine and chocolate at the Dwight Center. The sun had set by then, the sky painted wild colors, and we were just setting our glasses on the crooked wall when I noticed a last ray of the sun reflected in a window of a lone farm house across the hill. It goes without saying that I simply had to take a few pictures of this.

This was the start of my spring break. No school until Saturday when I will return to teaching at the German School (which is the job I love anyway). On our way back home we witnessed an extraordinarily beautiful rise of the full moon - what a beautiful finale to a wonderful day.

Oh Carola. Please be as kind to yourself as you are to others.
You have had a busy and stressful time. Sometimes things slip.
That said, I love your tipsy glasses and the moon. And hope that more beauty and wonder comes your way. And good wine.

I love the writing... Hope you have a great Easter.. Have a nice Spring break!

That is a wonderful photograph. So clear and love that the glasses are on slant. Makes for interest.

I have heard of the Sonoma County wineries, but never been. This is a charming picture, Carola. And the Native American exhibition sounds interesting. Wine and chocolate and a full moon to end the day, how wonderful. : )

I wouldn't call yourself pathetic. You are a wonderful person!
I would love to go to the nature preserve! How beautiful! I can imagine the feeling inside, being there for the Native American prayer and chant!
I think this picture is brilliant in every way! I truly love it! Big Hugs and I hope you have a great spring break!

Your photos is exquisite, Carola! What a lovely event that goes with the wine. Wine and chocolates can momentarily "cure" something sometimes... ;) Glad you're having some good times in between the rough stuff... ((HUGS))

It sounds like a wonderful place to visit. I love the image! I can tell you hadn't had too much to drink, because if you had you wouldn't be able to balance the wine glasses like that. :) I hope you enjoyed your spring break.