Last year I joined the year long Scene & Story and liked how by the end of the month I looked through all my photos that I took during those 28 to 31 days before and finding my favorite one, or the one that spoke to me the most. Sometimes I already knew "the photo" when I took it, but that didn't happen very often. It was interesting to see how I could still find a favorite photo in difficult months like October when I pretty much didn't take any photos because we were busy making it somehow through the month without losing our minds; it was equally interesting to realize that in a month when I took all my autumn pictures it was a completely different photo that made the cut in the end.

This year is not even two months old and I miss Scene & Story. But why not going on with my own twist of Scene & Story? Why not pick a photo of the month - and it doesn't have to be a favorite one - and tell the story behind it? 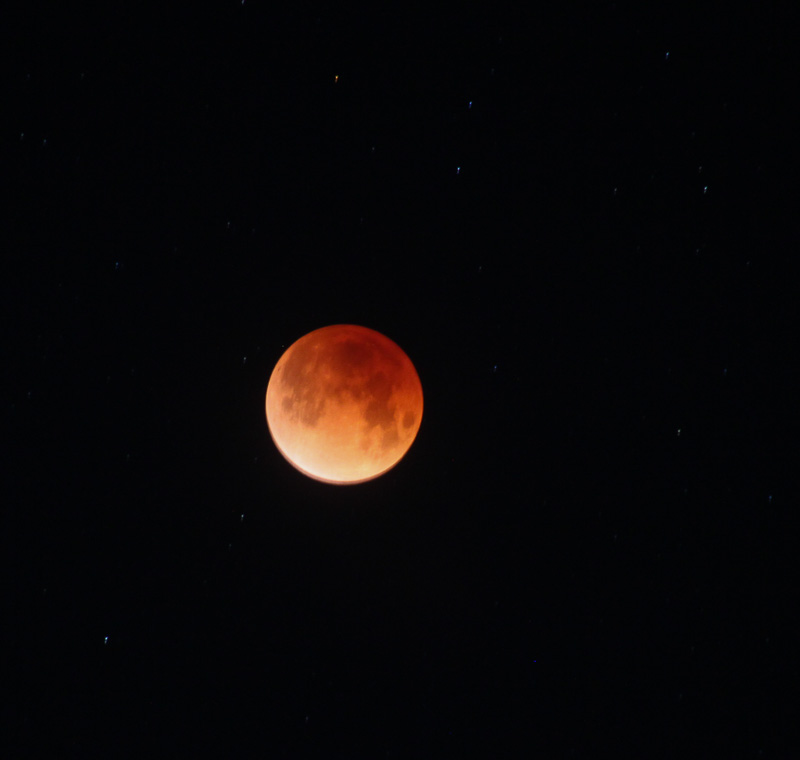 When I looked through my January photos I was convinced that I would choose a picture taken in Hawai'i. I should know by now that it seldom works out this way. It was a photo I took in the early morning of the last day of the month, and it's not even a particularly good one, but a rather blurry image of the eclipsed Super Blue Blood Moon.

The very first time I had seen a lunar eclipse was back in Germany. I was living on the top of a hill in Tübingen at that time and I just had to walk to the other side of the hill to see the entire valley before me with the red moon hanging over it. It was one of those unforgettable moments, and though I have seen a few more lunar eclipses since then none was as beautiful as that first one.

Until a couple weeks ago.

The Geek and I had our alarm clocks set for 4:30 in the morning. Thankfully we didn't have to go anywhere but just stepped out in the backyard. From there we could watch the natural show, and it was incredible beautiful. Often mornings are foggy here when the ocean sends over the clouds, but this morning was clear (and chilly for Californian standards) and crisp. I didn't take a lot of pictures, just a few and wasn't impressed with them. I put the tripod with the camera to the side and just enjoyed the silent spectacle in the sky.

The big difference to a solar eclipse is that a lunar eclipse takes so much longer. You can really enjoy it and have enough time to take it all in.

When I looked at my photos later that morning I was surprised that there were even some stars visible in the images. The moon might be a bit blurry, but having the stars balances it all out.

Email ThisBlogThis!Share to TwitterShare to FacebookShare to Pinterest
Labels: An Image and Its Story, lunar eclipse, super blue blood moon

It's so nice to wake up early in the morning and see the wonder of nature. I often get us very early just to see the sun rise. This is a cool picture of the Blue Moon. I've always wondered why they call it a blue moon when it doesn't appear to be blue at all? I love how you got all the pretty stars in the distance.

I am so happy that you are continuing this practice on. I miss it too, and have thought about still carrying on even though Lee and I aren't doing the link up for it. I think reviewing photos gives me a better perspective of where I have been and where I am going. Thank you for this reminder.

Actually, it's a fantastic shot. Can you share what settings you used to get the correct exposure and make the moon look so big and clear?

What a spectacular sight! It doesn't matter it is blurry, I love the photo. And you didn't have to travel to see it. I saw my first total solar eclipse this summer, it was a lot of fun and so special. I would love to see another eclipse sometime, either solar or lunar. Thank you for sharing your story.

What a fabulous photo of this amazing moon, Carola!
I think we all miss our monthly gatherings for scene and story. I too have decided to keep something similar going on my own blog! That's so nice if you do it too!
I didn't do anything for January as I caught this coughing virus which took absolutely ages to heal, but I will start my monthly image and write-up again this month!

I have thought about continuing Scene and Story on my own, also - but so far haven't done it - thanks for the reminder! I agree, the stars in the photo add to the beauty of the moon - and I don't really think of the moon in your photo as blurry so much as diffused. Your photo is beautiful!

Your photo is beautiful. It was so gray and cloudy we couldn't see it well here. Your photo is so striking and I do indeed love the stars.

I love your photo, it's gorgeous, Carola !
And what an interesting story behind it !
Enjoy your weekend,
Sylvia

Truly stunning! I love seeing the stars too! Thanks for sharing your story! Big Hugs!

Quite beautiful and lovely memories you have.

Carola, I love that you're still doing this! I've been resting, I guess -- I haven't posted on my blog in almost two months, since the final Scene & Story. I too have been thinking of taking it up again. We didn't get the total eclipse here in Maine, and in fact the sky was overcast that night where I live. As you described the eclipse you saw in Germany, I could picture that scene as vividly as I could see your photo. How wonderful that you could capture stars along with that beautiful "blood moon"!