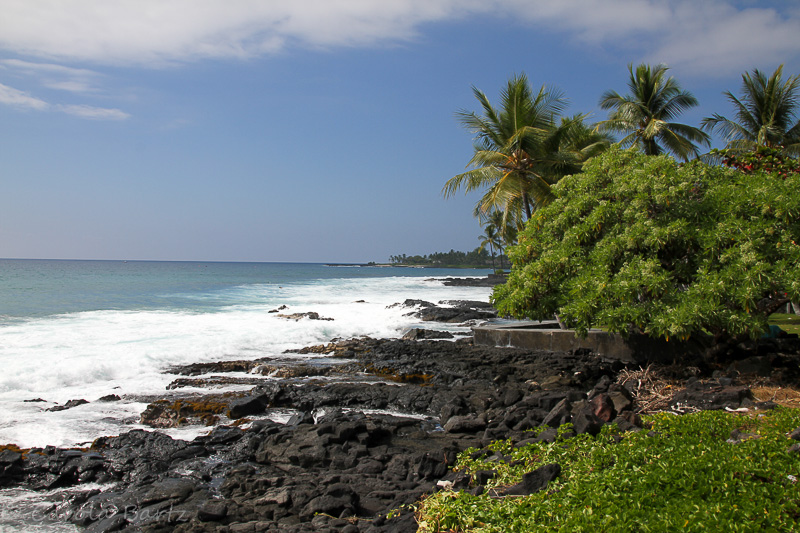 When the Geek and I married we never had a honeymoon. It didn't come to mind back then - there were other things that were way more important and urgent - and we never thought that we had missed out on something. But when Kaefer left home to go away to college, things changed. It took us a while to get used to the fact that we were kind of "free" people now and could go on trips and weekend excursions whenever we wanted. Well, not quite, there are certain times when I have to be at work like the beginning and end of the school year because that time is always mayhem. But that's only a few weeks a year, and the rest is for us to decide what to do with it - on top of my free time during the summer.

Last year the Geek and I also decided not to give each other gifts anymore for Christmas and birthdays but instead save the money and go on trips instead. We both love to travel and it really isn't hard to "sacrifice" those gifts. Traveling is a gift in itself. 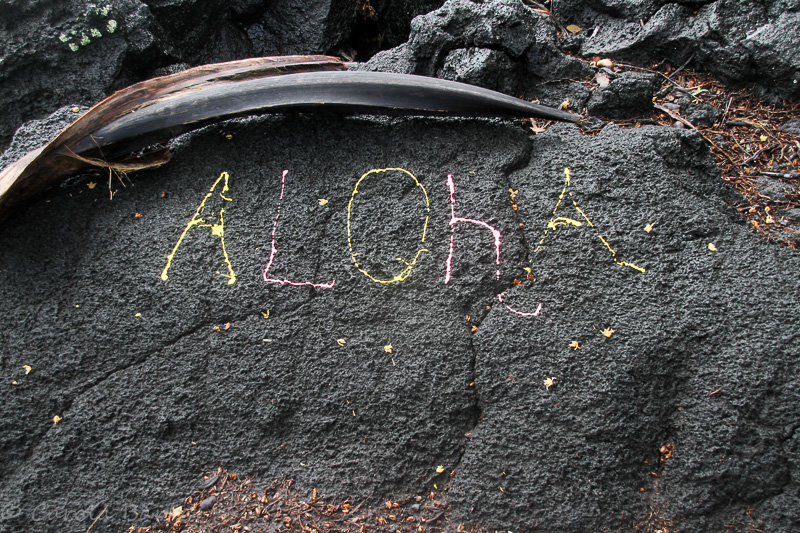 When we had a family vacation in Hawai'i back in the summer of 2016 for Kaefer's graduation we fell in love with the Big Island. Back then we stayed in the Avocado Tree House and thought that we should have spent more time there. So it was a very easy decision to go back there and finally have a honeymoon after 20 years of marriage.

This time we stayed for ten days. This part of the Big Island is in the Puna District which gets a lot of rain, and we certainly got our share of that. However, the island is so small that it only takes an hour to drive or so to be in the sun, and it's always warm, whether it rains or not. That wasn't the only difference to our last stay, though. The fruit that we got from our hosts was different as well, of course. This time we had the apple bananas (so delicious), abiu, papaya, rollinia and rambutan which were my favorite. 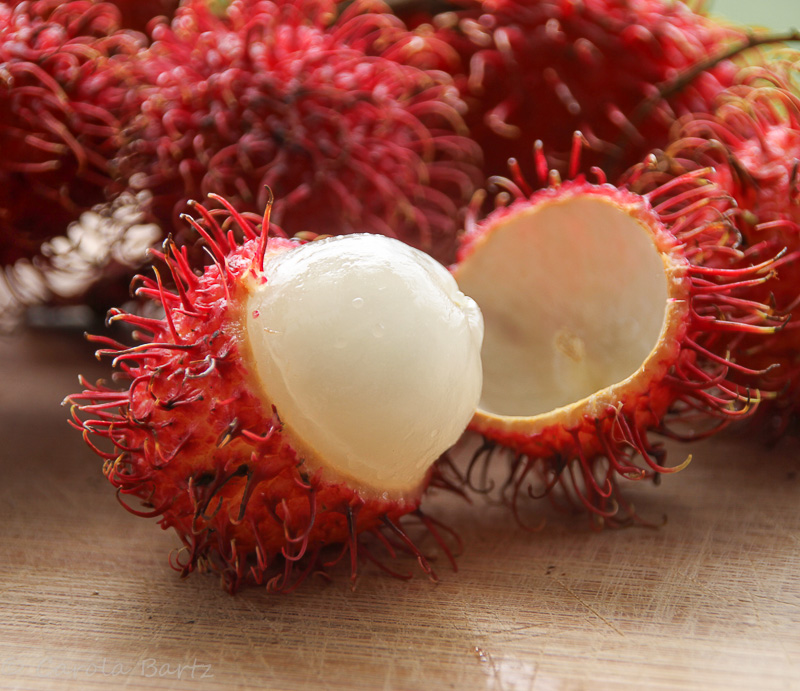 I was very happy to meet our old friends again, the Gold Dust Day Geckos. They are incredibly cute and quite some fun company. 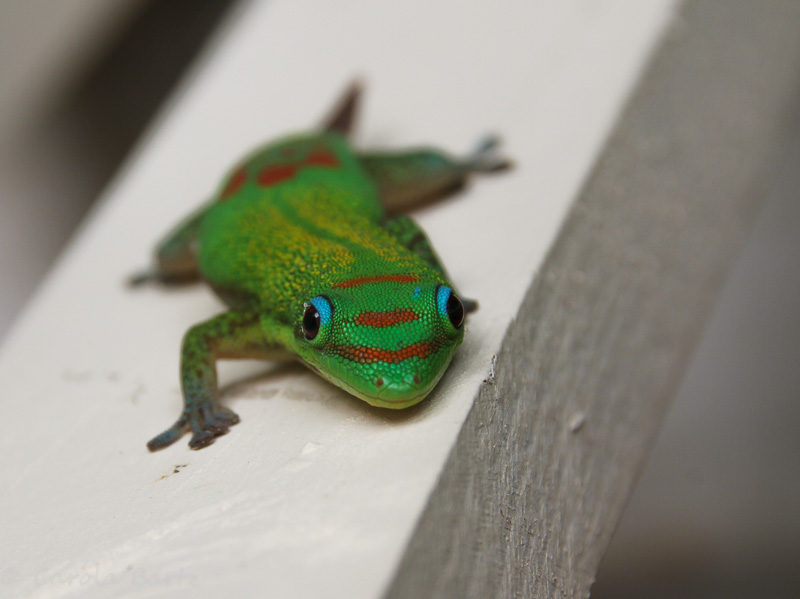 Whenever I was thinking of the Big Island the volcano came to mind. Kīlauea was a magical place when we first visited it, and it kept its magic this time. 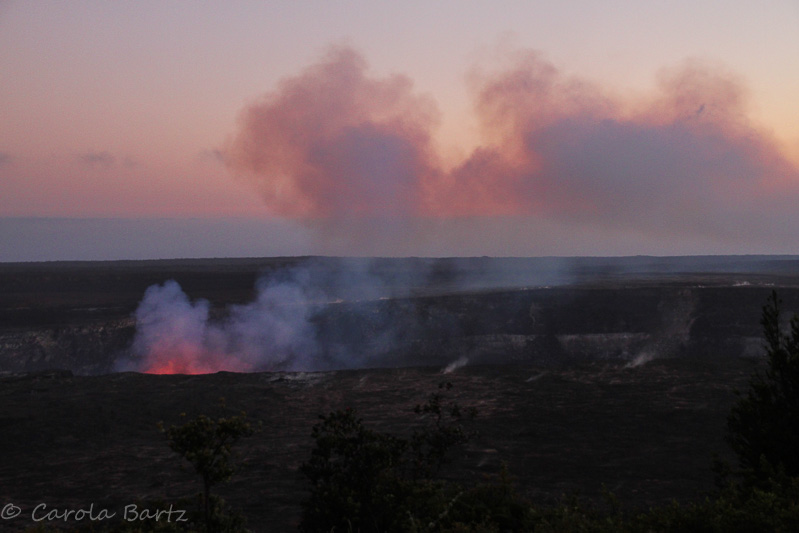 We did a lot of hikes at the volcano, hikes that I had dreamt of for the past 18 months. Now we finally hiked those trails, craters and desert, over old and newer lava, faithfully following the rock cairns - called Ahu - and enjoying nature in this special place. 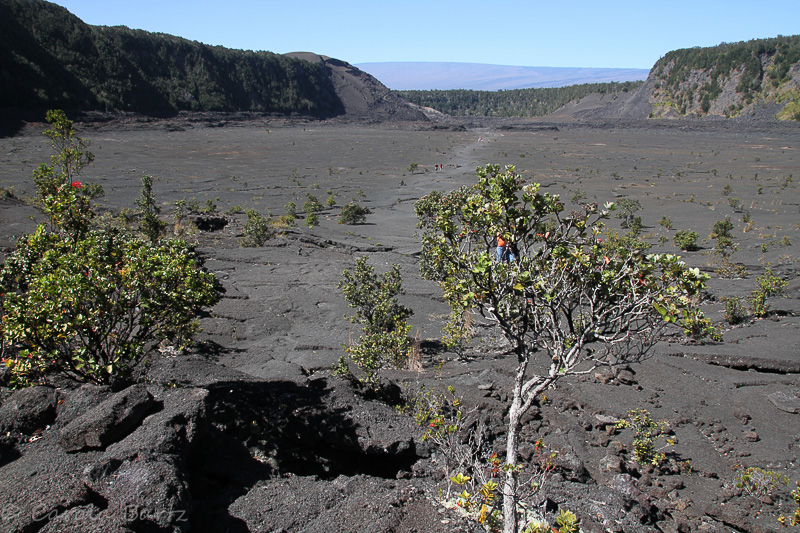 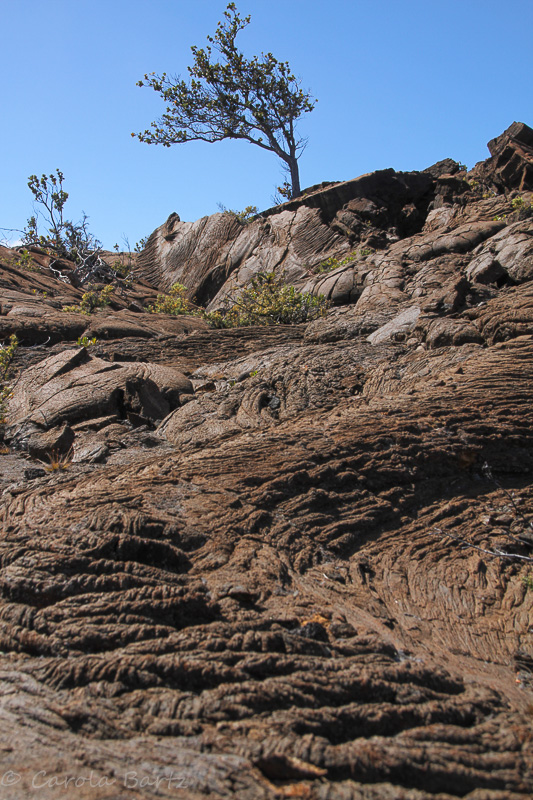 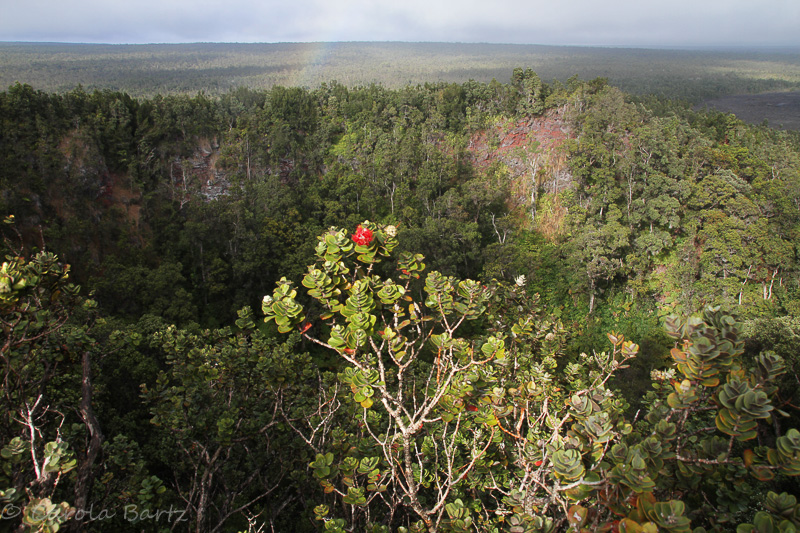 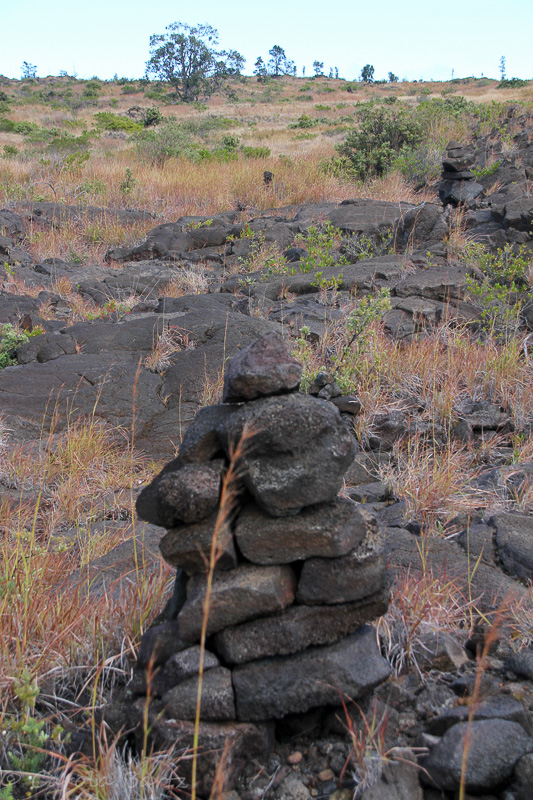 There was no lava flow in January, no ocean entry of the hot fiery liquid stuff. If you were willing to do a very long and hard hike (we're talking 10 - 12 miles here) you could see some lava flow further up the slope, but since we had seen the lava in 2016 we skipped on that hike since we know how hard it really is.

For the first time we saw Nēnē, the endangered Hawai'ian goose and state bird. Back in 2016 we never saw a single one, but this time we saw so many of them. They are quite beautiful birds. 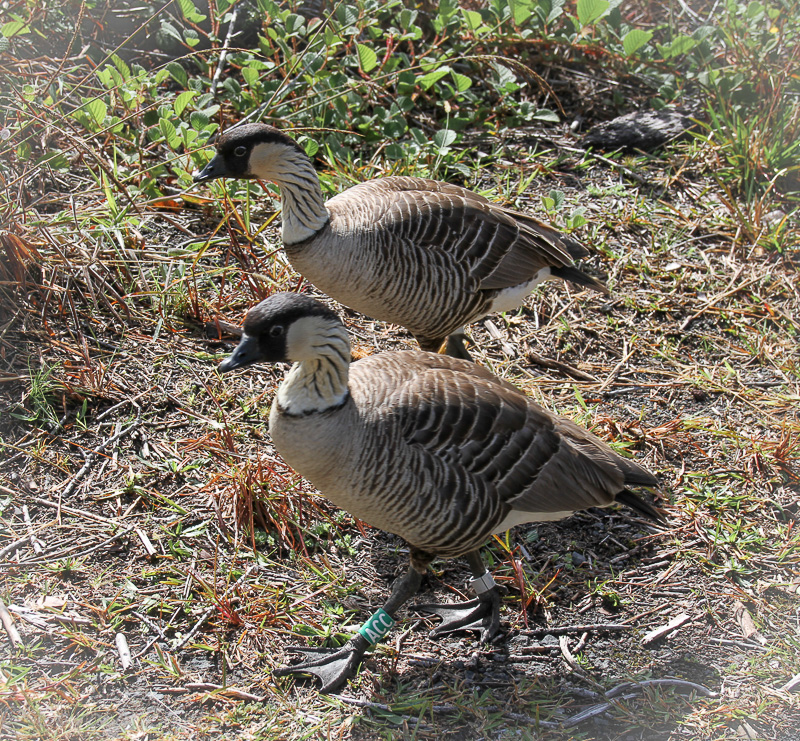 The Puna District belongs to the rain forest and it certainly rains a lot here. The result is wonderful vegetation, a lot of birds and the drives along the rather narrow roads here are beautiful. I like it when the trees form a tunnel over the road. 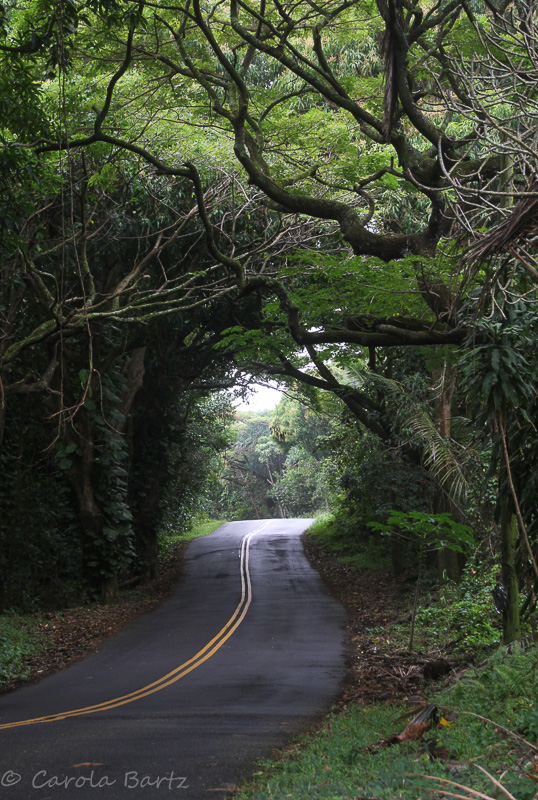 The 'Ohi'a Lehua is a unique tree that is endemic to Hawai'i. It grows in different habitats and it usually is one of the first plants that grows out of lava. It's quite astonishing to see a huge field of dark lava and there are trees with the most beautiful flowers growing seemingly effortless out of it. 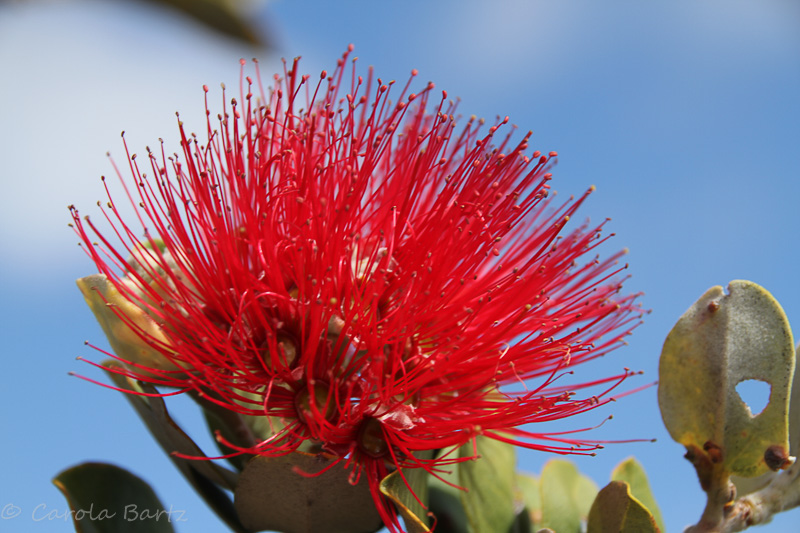 Of course we went to the ocean - you can't really avoid it when in Hawai'i. After all, the islands are surrounded by the wild and wet stuff. And wild it was! 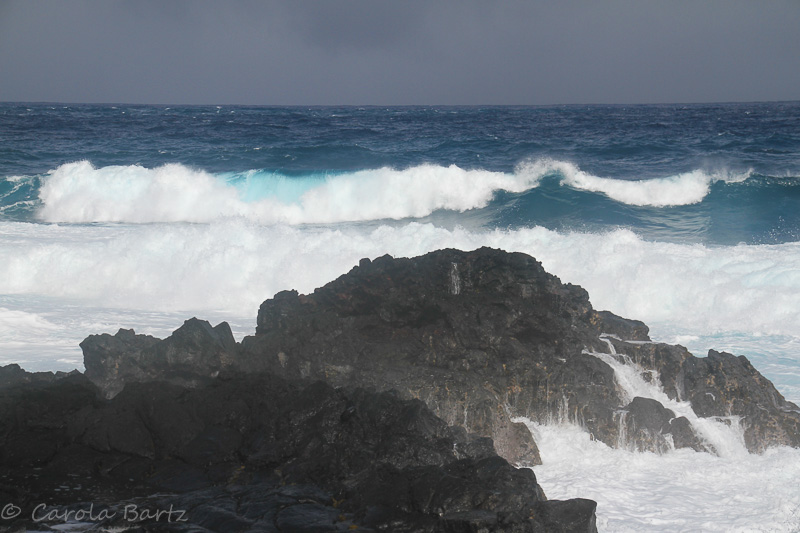 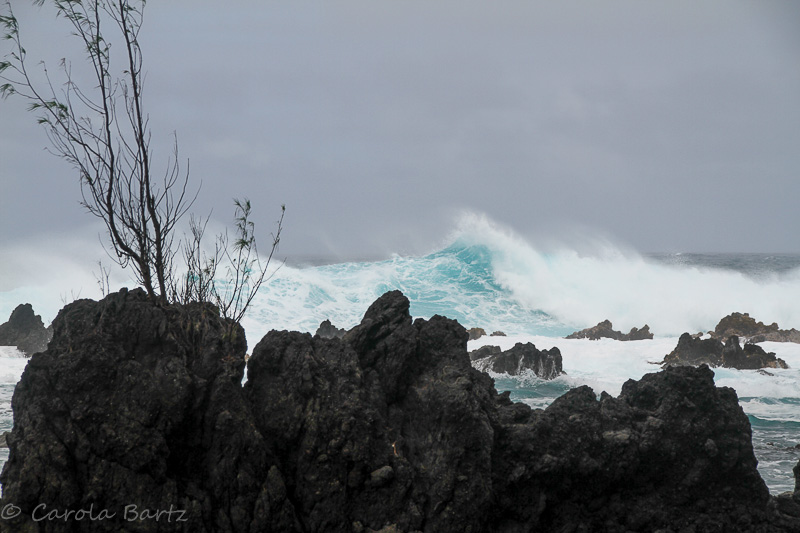 There are warnings everywhere on the cliffs not to go too close to the edge, but there are always people who know better. I find it quite amusing - human stupidity doesn't know any limits. 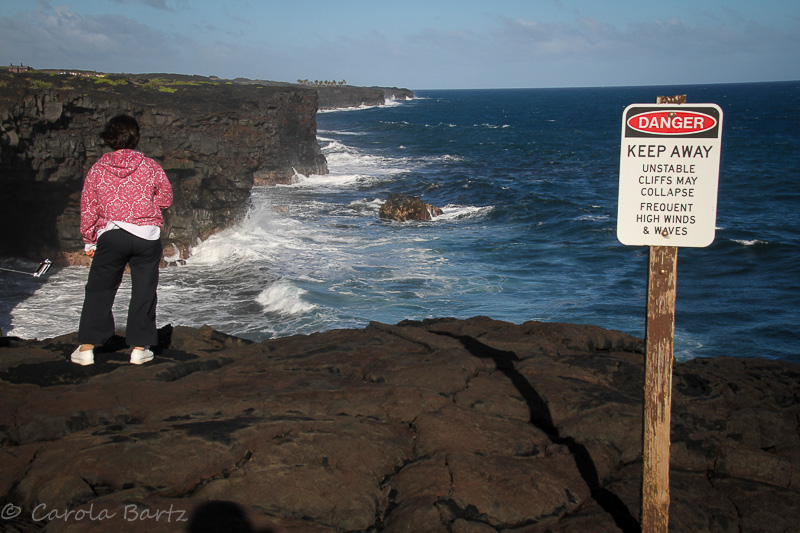 I found a heart shaped coral at a beach that was covered in white, orange and pink corals. And we were so lucky to see some Green Sea Turtles resting at a Black Sand Beach or swimming and feeding in low water. Some more unforgettable sights. 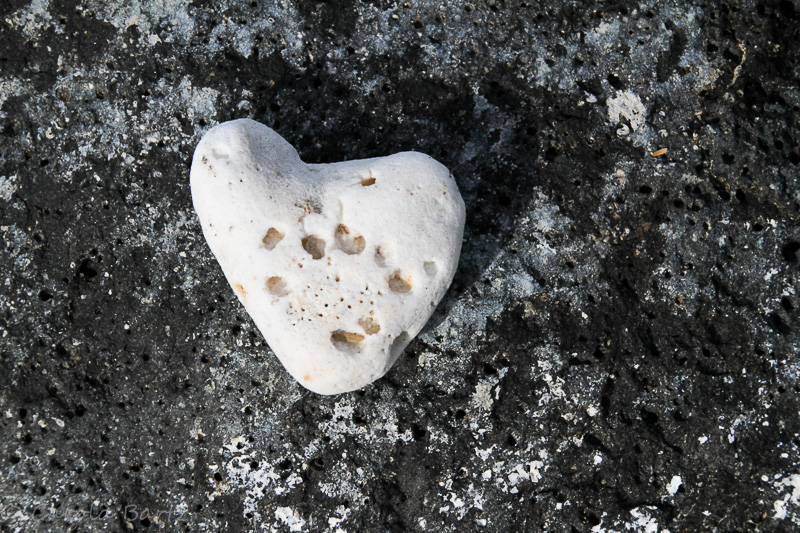 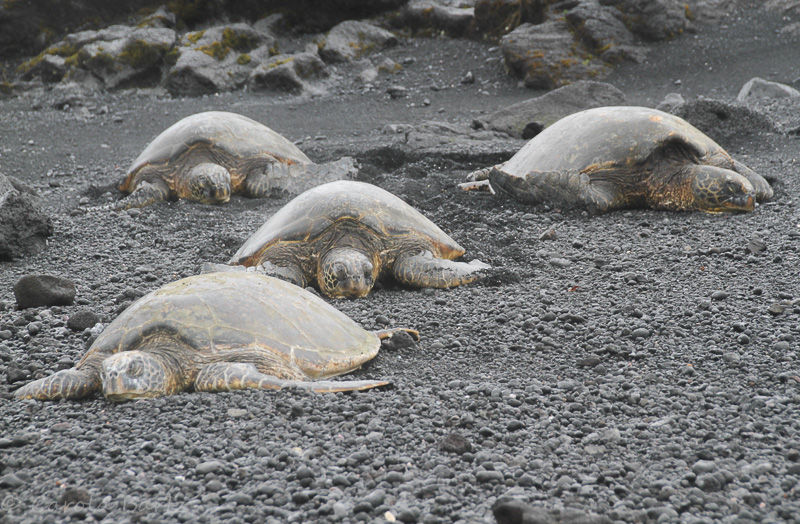 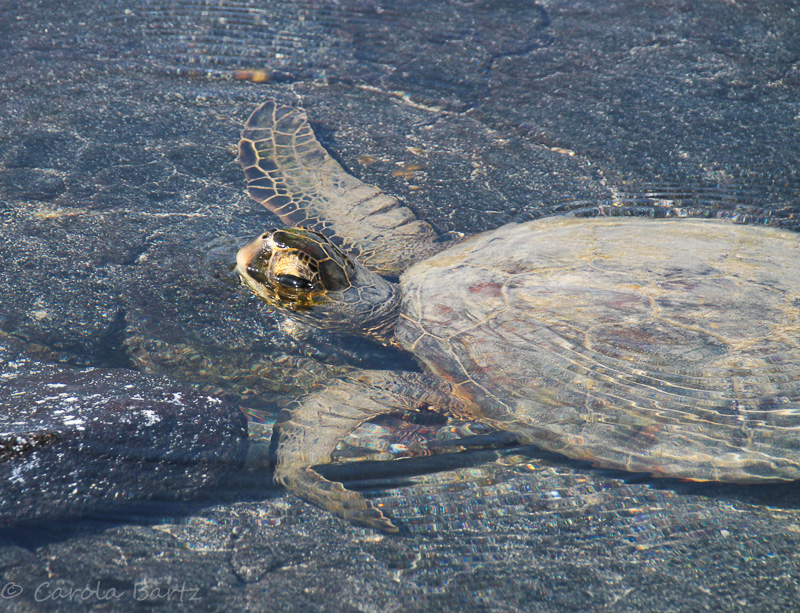 Of course there were rainbows and sunsets. 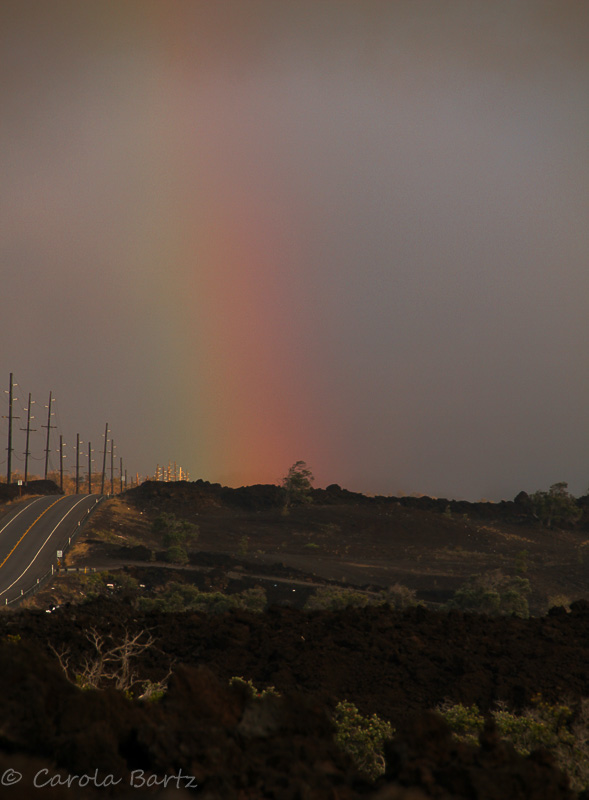 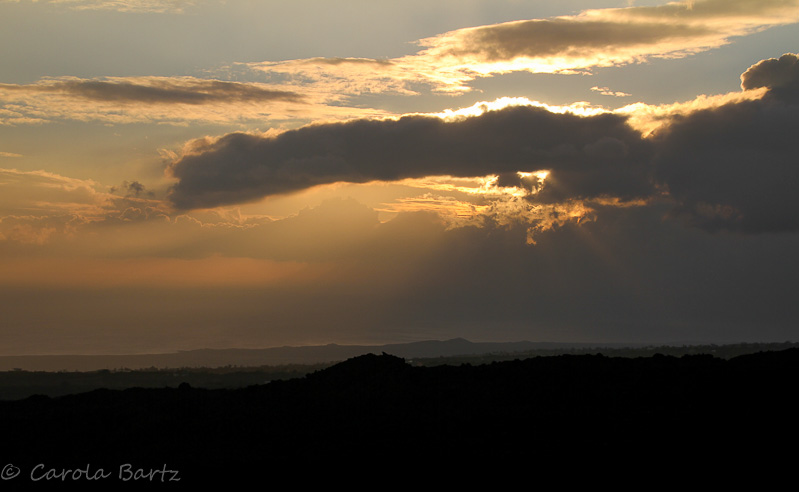 We ate lots of Poke - and I mean lots of. There's a shed that makes the best Poke that we frequented often - it is just so darn good. I have to learn how to make real good Poke since I get sushi grade ahi at my neighborhood market. 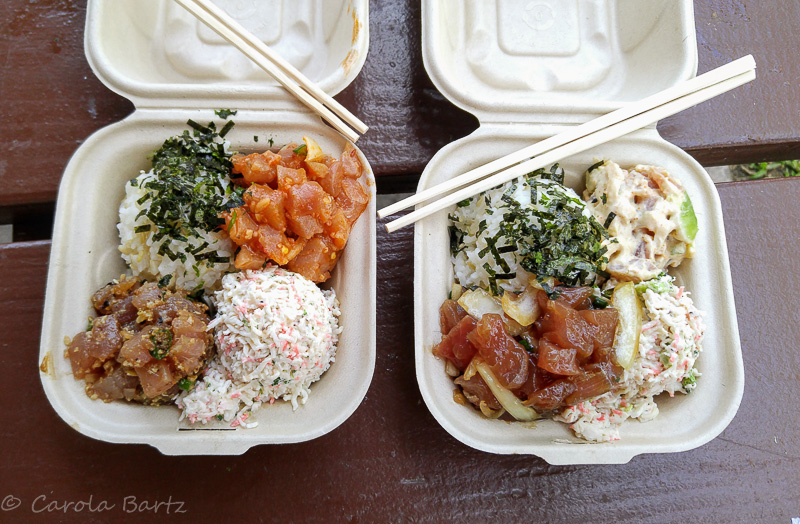 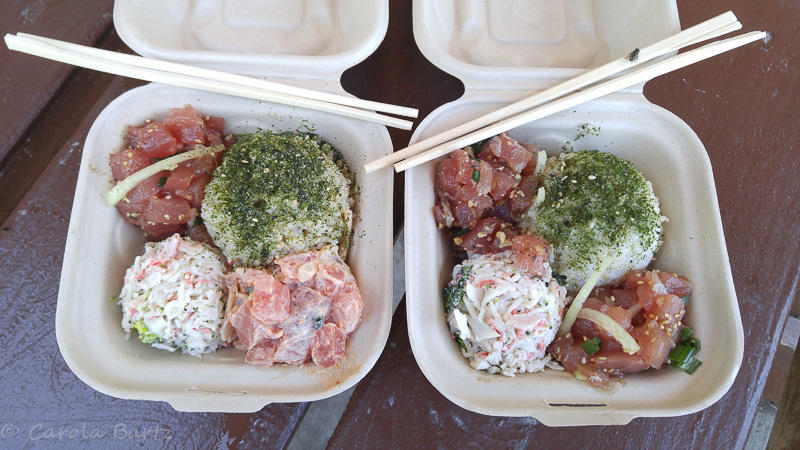 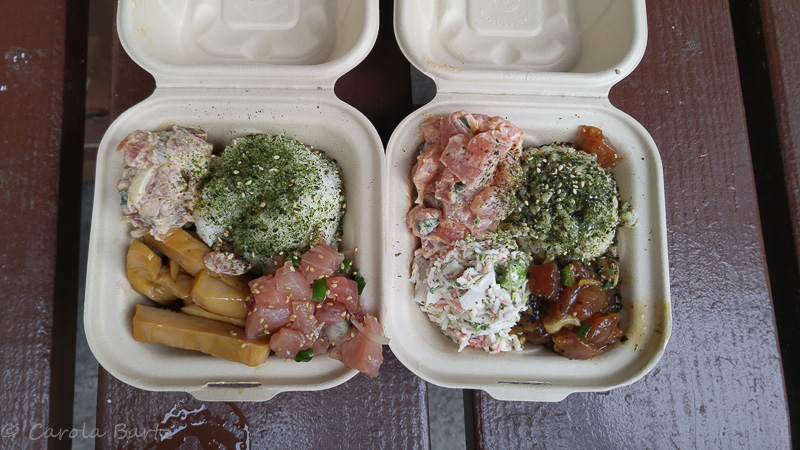 It was sad to leave the Big Island after ten wonderful days. I'm pretty sure we will be back. This is such a magical place. During those ten days I didn't read the paper neither watched TV (there isn't a TV in the Avocado Tree House) and it was very relaxing not to hear any disturbing news. We were on an island!

This is what we brought home from Hawai'i - you can see our priorities... little pouches for Kaefer, lots of Kona and peaberry coffee, Macademia nuts for me and Alaea Red Hawai'ian sea salt (for Poke). 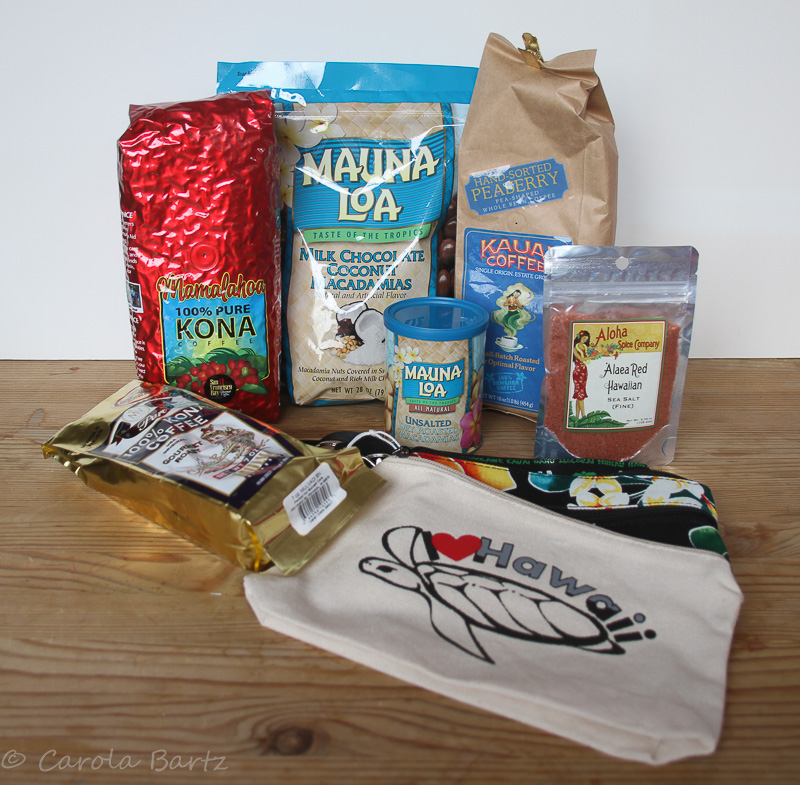 It's beautiful, Carola. And so special to share together. Traveling is the greatest gift, isn't it? Sharing experiences with someone you love, seeing and doing fun things and then having the memories and photos forever. You have some smashing ones here -- beautiful camera work. It looks like the best honeymoon anyone could have -- and all the more so because you've had your years together to know how you travel and are together. I love this!

Stunning photos, Carola! We had the same situation when Meg went off to university. It comes as a bit of a shock doesn't it? Steve's first day 'home alone' and he booked us a short holiday in Wales. It was a lovely surprise! We now aim to have a few days away every October. Not far and not expensive, but a chance to immerse ourselves in nature, much as you have done - it is food for the soul!

What a fantastic trip. The poke looks so good!

Such a beautiful trip - and it's wonderful that you were able to take your belated honeymoon! It looks as though you saw and did so many wonderful things!

Those Sea Turtles are so BIG! You saw many wonderful things on your trip to Hawaii. I have been there twice, once the island of Kona. And those macadamia nuts are so good, aren't they? The chocolate ones are Yummy too. What an interesting and unusual looking fruit this is, and the red flower is unique and pretty. Love that heart shaped rock, and I'm so glad you got to spend ten days in this beautiful place.

What a great trip. We didn't have our honeymoon until our 25th Anniversary and then we went to Alaska with Mallory though because it was her graduation present. Our trip was a lot like yours except colder.

What an amazing trip! So happy you had such a wonderful time! I love the photos! Thank you! I can't believe that person was on the cliff?? Stupid for sure! Big Hugs!

After digging my car out this morning after the latest snowstorm, I really enjoyed basking in the Hawaiian sun of your belated honeymoon photos! I'm so happy for you...it looks like a wonderful trip.

Hello Carola, well! I have to say that I was spellbound from the start to the end of this lovely post.
What a fabulous spot for a honeymoon (or any holiday). How wonderful to see it through your eyes.

What a wonderful trip!! The avocado tree house looks like the perfect place to stay. The geckos are so cute. I have never seen sea turtles resting on the beach! Your photographs are so beautiful. I have never been to Hawaii, it is definitely on my bucket list.

Your photos are amazing Carola! The Geckos and turtles are my favorite.Would you believe we've never been to Hawaii? Bob and I stopped gifting each other many years ago. Being together is our continuing gift to each other. Glad you enjoyed your belated honeymoon!

such glorious photos! so happy you two got to return to this special place.

I remember the first time I tasted pineapple in Hawaii, I couldn't believe it is the same fruit we have in England, which normally I don't like because it is hard and sour here. We like to go on outings rather than exchange presents too.