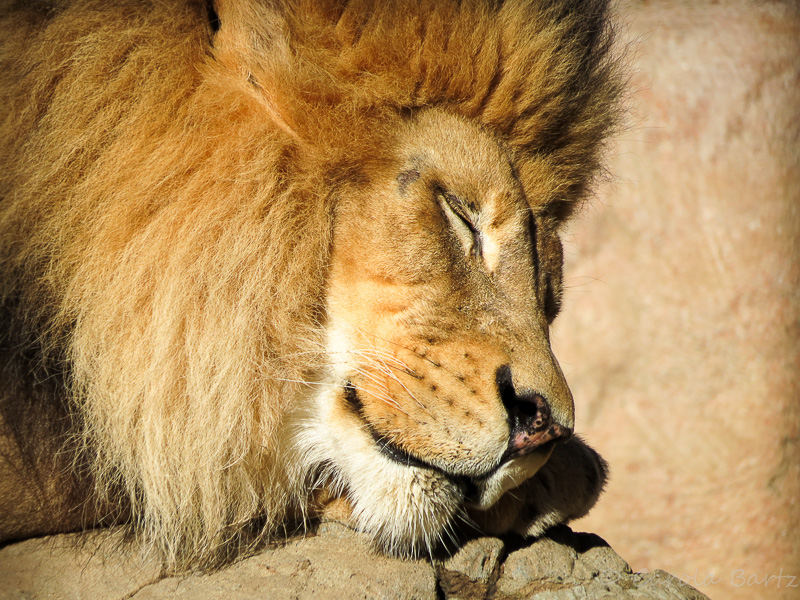 During winter break Kaefer and I met with our friend Denice and her not even two-year-old daughter to visit the Sacramento Zoo. We were lucky to have chosen the only sunny albeit chilly day in a row of rainy days that descended with heavy force onto the North Bay and the Central Valley in the first week of the new year.

Sacramento Zoo is a very small zoo. It has some beautiful enclosures like the ones for the red panda and the giraffes. The ones for the big cats are definitely too small and some others made me just very sad. There is certainly still a lot to do. Animals in captivity is sad in general, but sometimes unavoidable. I still prefer to see them in the wilderness.

However, Sacramento Zoo also has a great partnership with UC Davis in veterinary training. UC Davis is the only university in California with a veterinary medicine department, and one of only 30 veterinary schools in the entire US that are accredited. UC Davis partners with the Sacramento Zoo in the field of zoological medicine, and when you're lucky you can even watch surgery on an animal (we weren't). As the daughter of a veterinarian I was fascinated with this medical location.

But we were here to watch the animals. Our first longer stop was when we came to the giraffes. 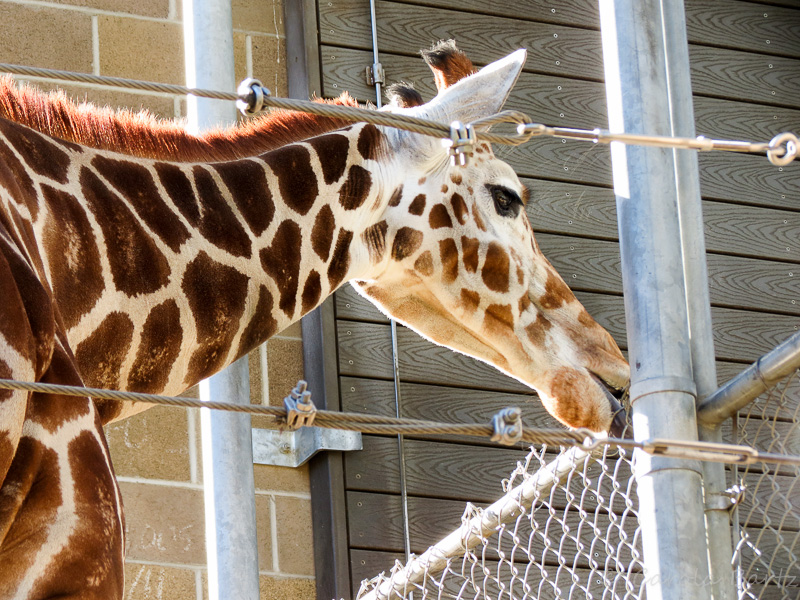 One of them stood very close, licking the fence. Of course we were wondering why she did that and were joking that she just needed some iron.

Instead of my big DSLR I had brought my Canon PowerShot SX40 which has a very long and powerful zoom lens. I was very happy I had decided to bring this camera - I think you easily believe me. 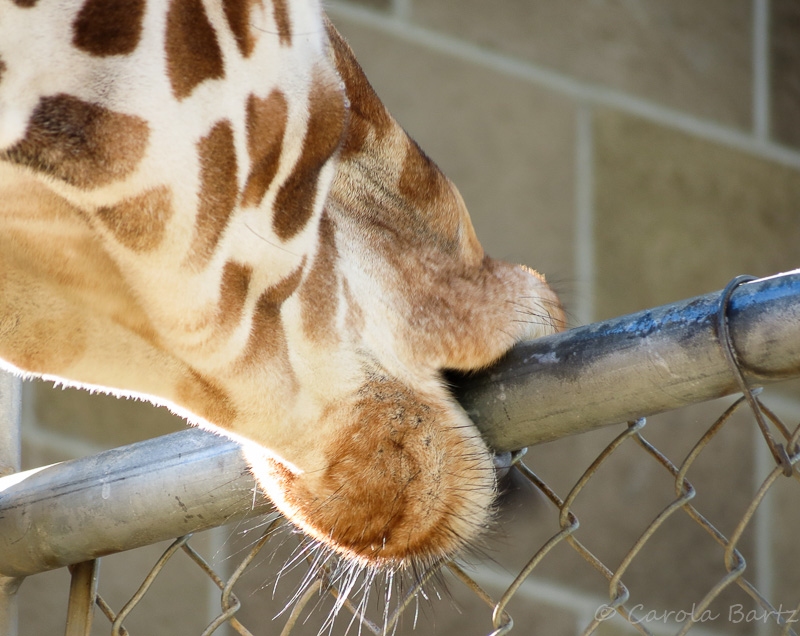 When the Kiddo was getting a bit louder, the giraffe turned to us to find out what the commotion was all about. 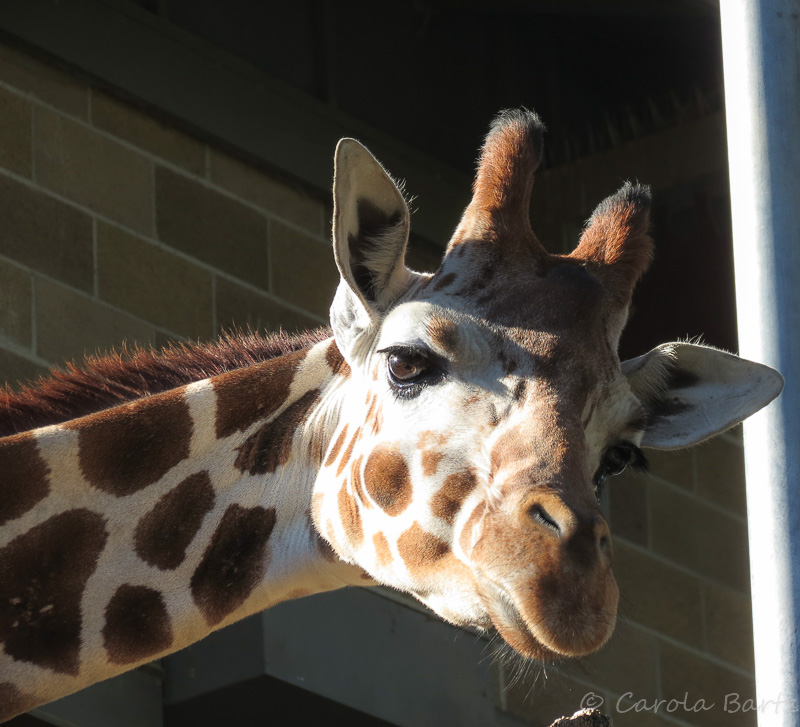 I love the expression on her face!

There were five or six more giraffes around, a few of them youngsters. One was very busy chewing on a leaf. 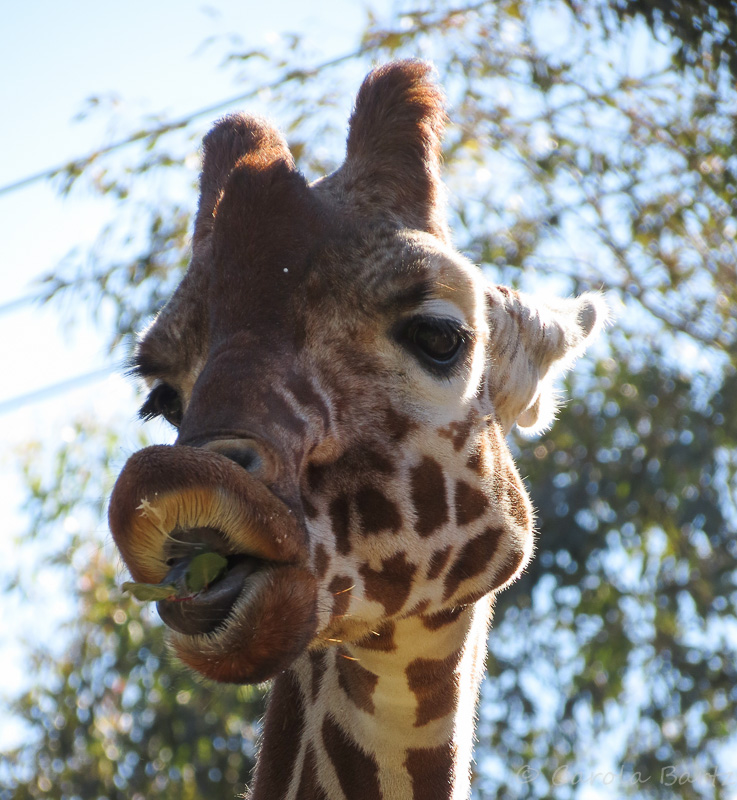 A juvenile one - I guess an equivalent to a teenager - was trying to bite down onto some loose branches. 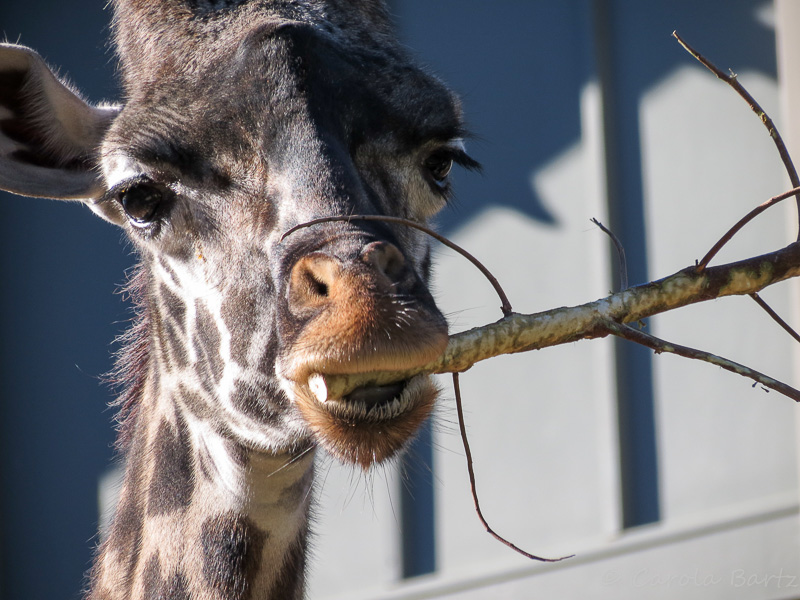 While we were still watching the giraffes - they were quite entertaining - we heard the loud roar of a lion. And not only once! So we marched over to the lions, and there he was, standing on a rock in the center of his enclosure and roaring. His wife, however, was not impressed by him at all. 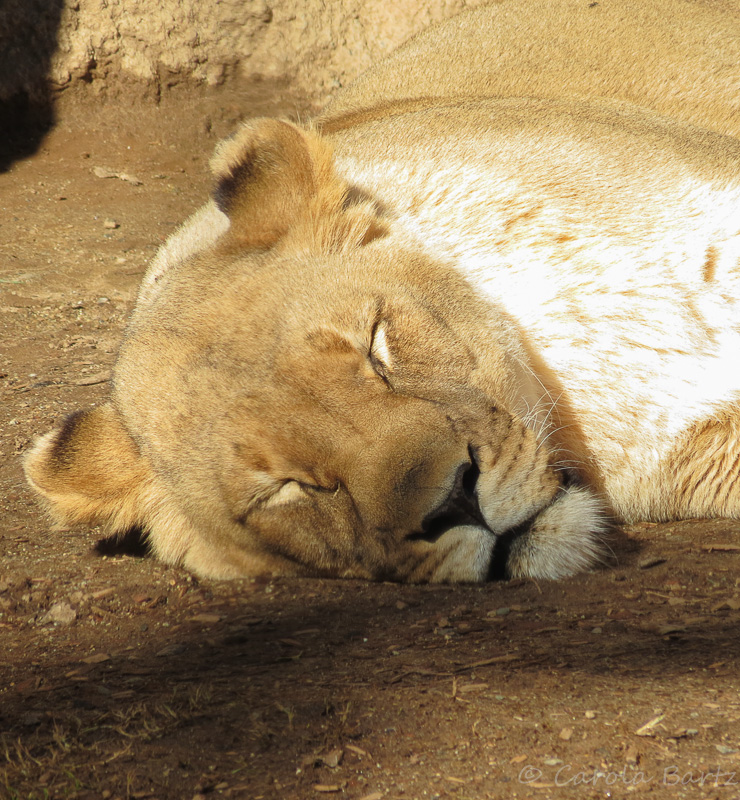 Did it hurt his pride? 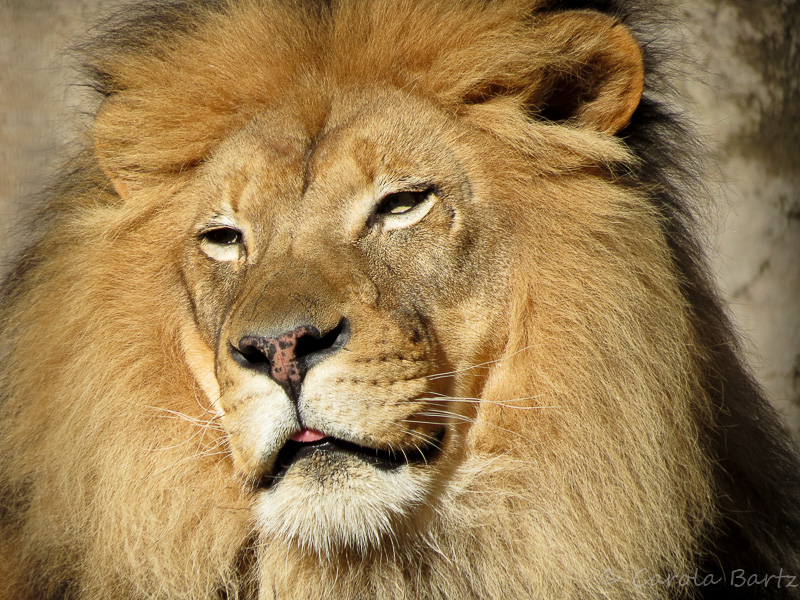 I don't really think so. He just turned around... 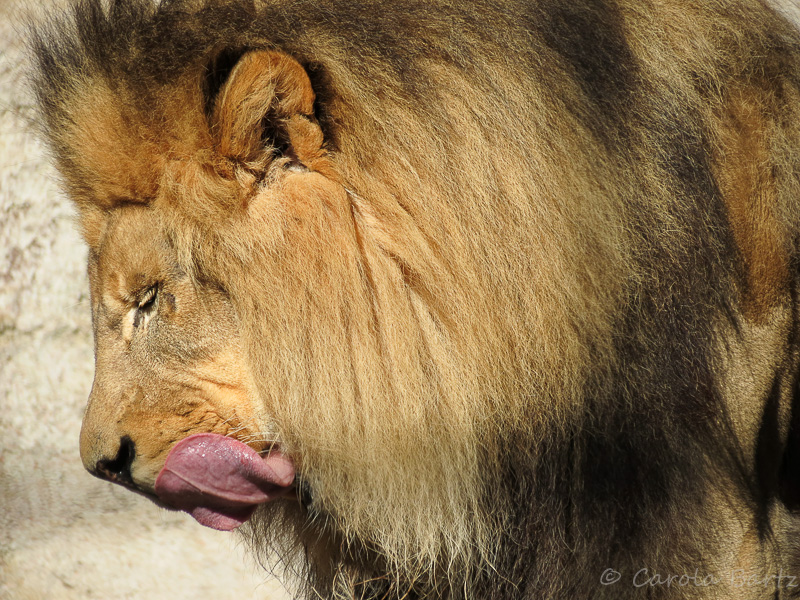 put his head down on his lovely little paws... 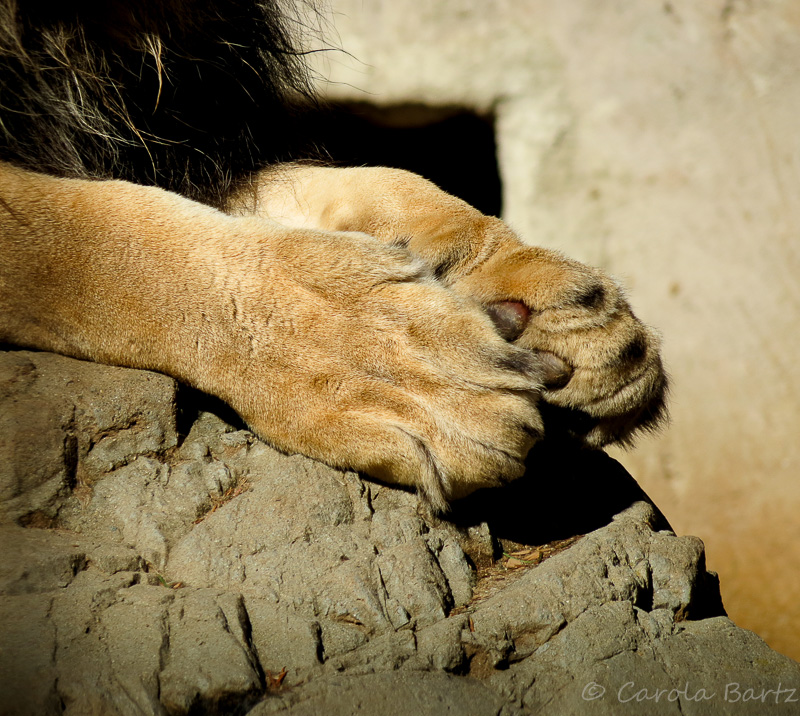 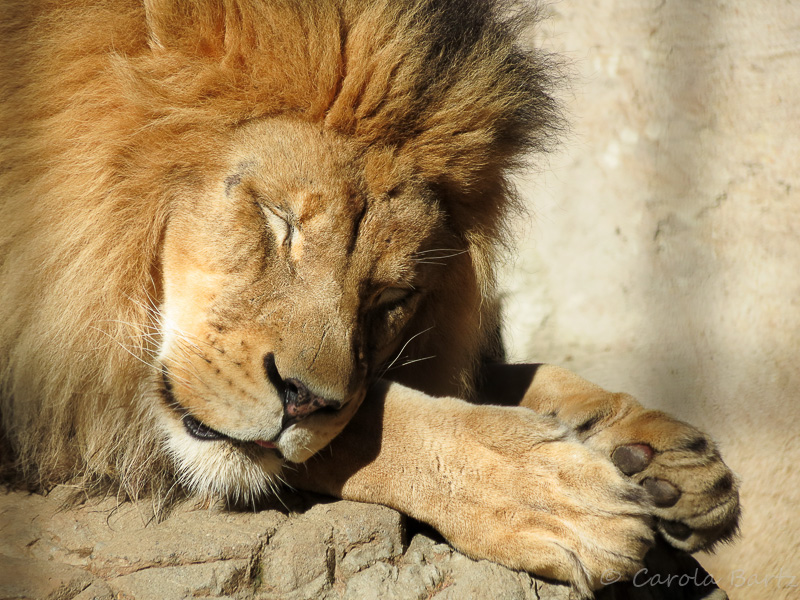 We enjoyed the lemurs of whom I don't have any photos and then went to a café right across from the flamingos to take a break and find some shelter from the cold. 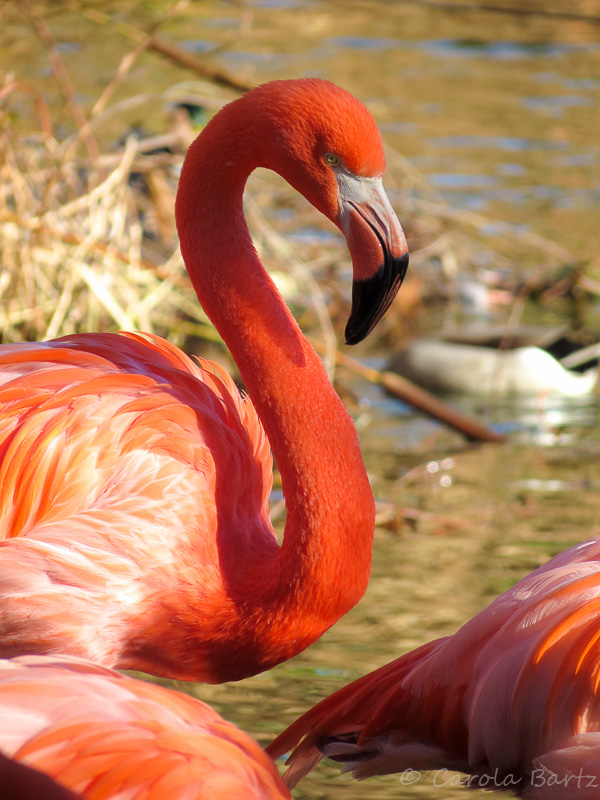 When you go with a teenager to the zoo expect some silliness! 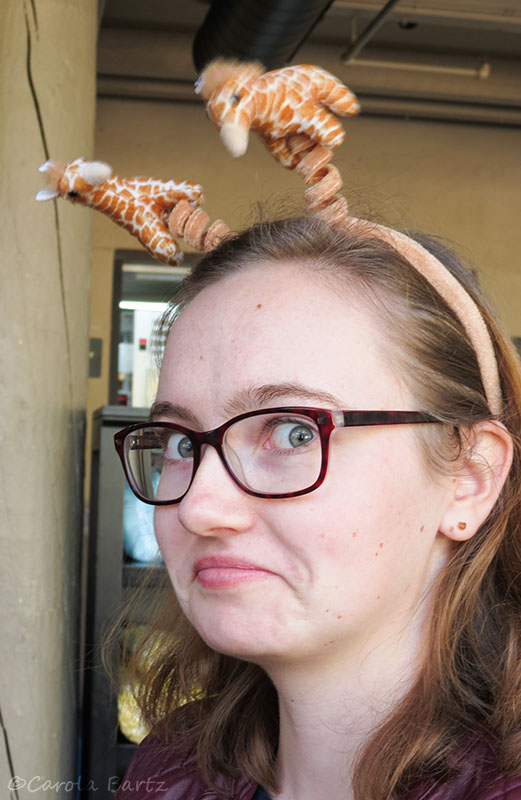 Whereas the little ones like the Kiddo are just cute. 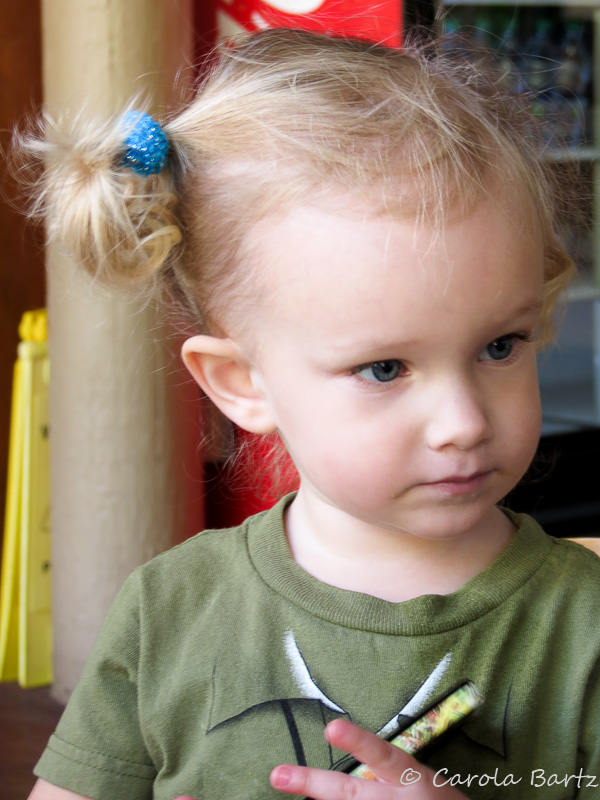 Of course we had to go to the gift shop at the end of our visit. It has the typical gift shop stuff, but this t-shirt cracked me up! 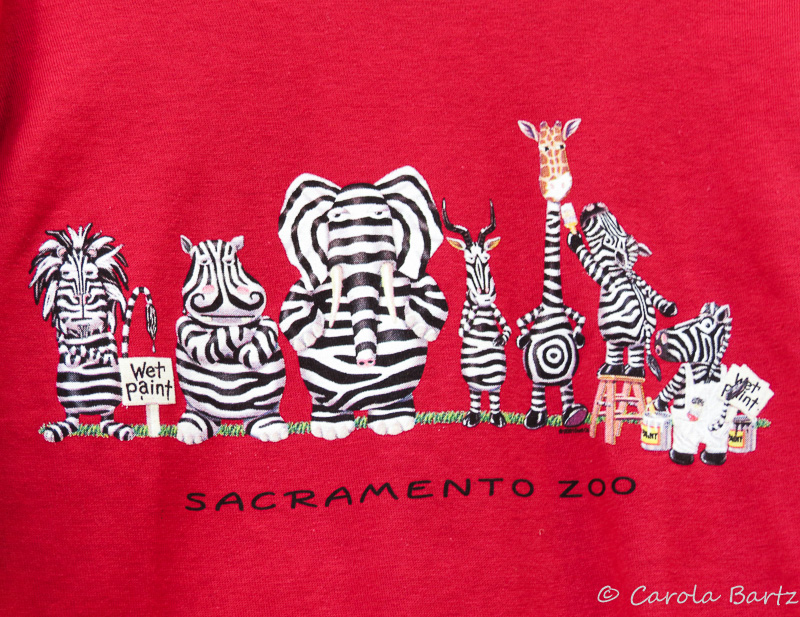 And here's my favorite version of "The Lion Sleeps Tonight". Smile and enjoy.
Posted by Carola Bartz at 6:34 PM

Coincidence. My latest post is a zoo visit too.
I agree with you - I would much rather that the animals were free, but sometimes it just isn't possible. Sadly, some animals can now only be found in zoos.
They have come a long way from what they were though.
Love those giraffe shots - and would dispute the lions 'little' paws. Beautiful shots though.

You got some great animal shots. I always feel bad for the animals in the zoo too, but then I think at least they are not being poached or hunted. Happy weekend.

love love your animal images they are wonderful.

Wow, those are fabulous animal and people photos! Love all the closeups.
Have a great weekend!

The photos here are magnificent, Carola. Just magnificent. Those lions, the giraffe, such amazing tight shots. They should be enlarged -- what impact.

All that and it sounds like a terrific day, too!

These are beautiful photos of the animals at the zoo Carola, especially the giraffes. The t shirt graphic is so fun. Have a great weekend.

wonderful, wonderful photos. Love the ones of the lion. It looks like you had a great time.

These animals touch my heart so much! What amazing photos you got! I feel bad, that they have to be in a zoo, but the way the world is going, you just don't know anymore! Your daughter is so cute! Love the t-sirt! LOL! Big Hugs!

It's been a long, long time since I visited a zoo. When I lived in San Diego, we had an annual pass and went often. We lived close enough to walk there! It's a wonderful zoo, but like you, I wish the animals could live in the wild and be safe and thrive there. Wonderful photos - yes, I'd say you took the right camera!

Your photos are so clear – they are superb. It is sad to see animals in a zoo but at the same time they live longer there and eat enough. I heard that giraffes are endangered now. You had a great outing.