Inside the Lava (The Volcano Part 2)

In Hawai'i Volcanoes National Park you can visit a pretty spectacular lava tube, the Thurston Lava Tube, just a short hike away from the Crater Rim Drive. It is so easy to reach that it has become one of the most popular destinations at Kīlauea. We were very lucky to arrive there between tour buses and had a rather uncrowded experience.

After a few minutes on the paved trail you reach this walkway and see the entrance to the tube. 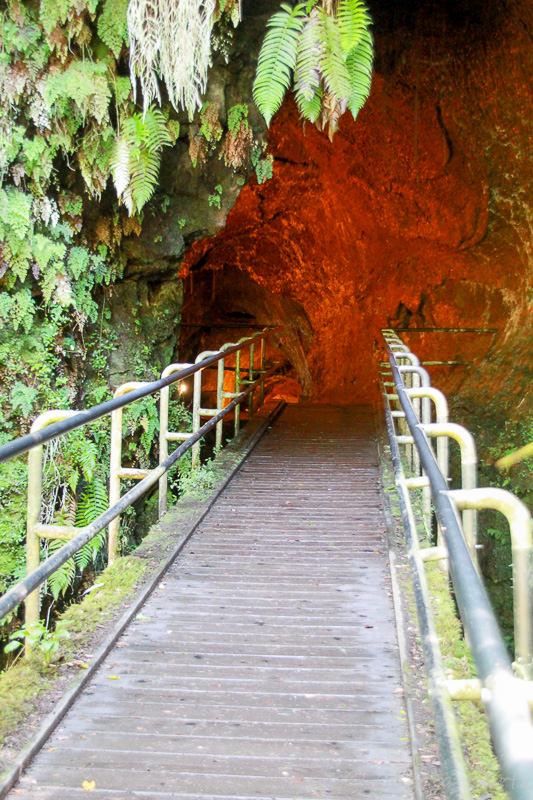 No, this is not the glow from lava, just from the lights that illuminate the tube. However, it does look eerie, doesn't it? I was more than ready to go inside. 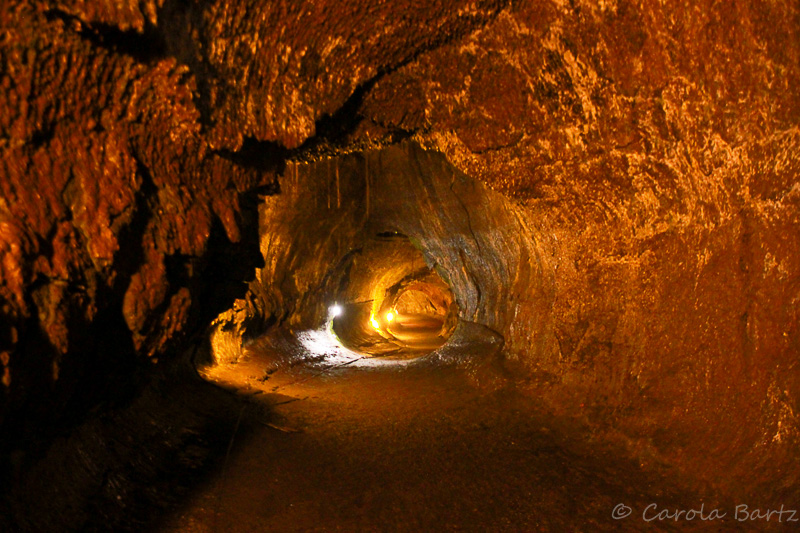 This was the first view after we had entered the tube. It took my breath away. I had been inside some lava tubes in the Lava Beds National Monument in Northern California, but most of them were smaller and not as well lit (we often had to take our torches inside). This was a tunnel with a very comfortable height - no crouching necessary.

A last view back before we moved deeper into the tube. 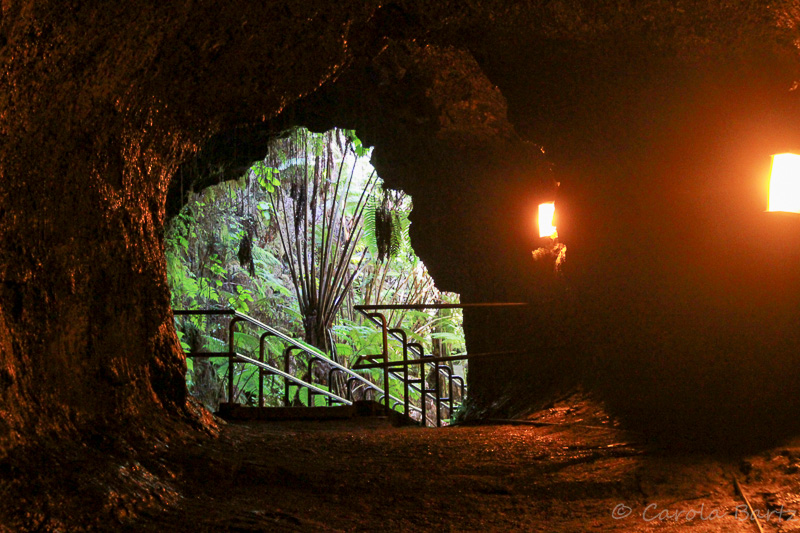 This is where lava was flowing beneath the hardened surface of a lava flow. There are still tubes in a different part of the park that actively drain lava from the volcano, mainly from Pu'u 'O'o, the current eruption site. So these tubes are types of lava caves that form when lava develops a continuous and hard crust, which thickens and forms a roof over the still flowing lava. It's lava flowing beneath lava. When the lava flow has ceased and the rock has cooled, a long channel is left - the lava tube. 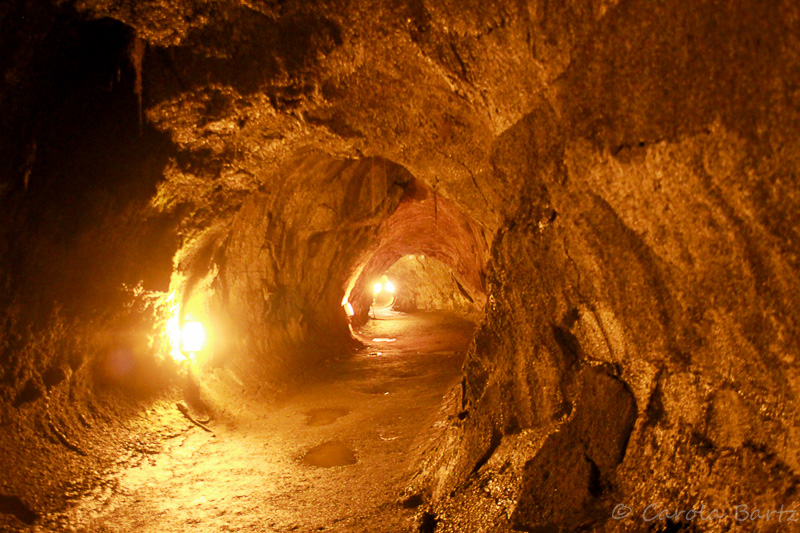 It is mind boggling to imagine that real hot glowing lava used to flow here, creating new land, destroying everything in its way. Today we walk through there and don't even have to worry about banging our head (which happened to me in the lave tubes at Lava Beds NM and was very painful). The ground is wet, but even inside this inhospitable environment there are organism that grow happily along. 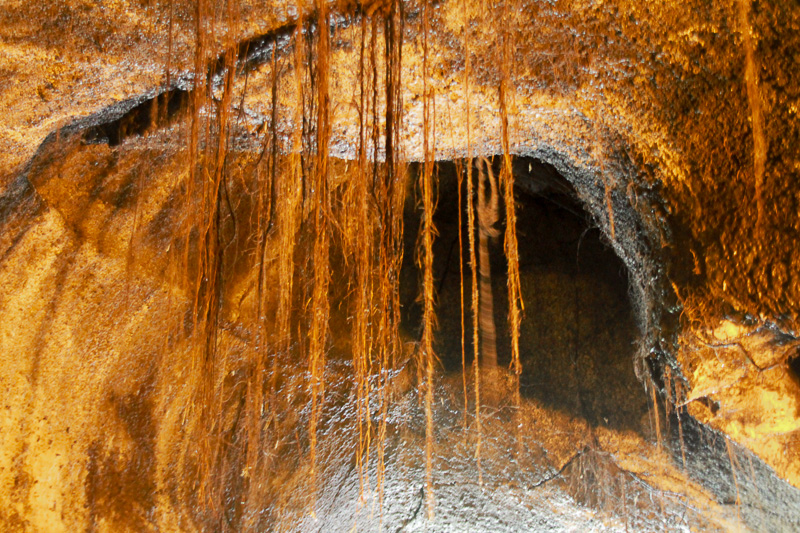 The lava tube was way to short for my taste. There is another part of the tube that is closed to the public. It actually goes further on for another 1000 feet - unlit in complete darkness. However, the end of the tunnel was visible way too soon. 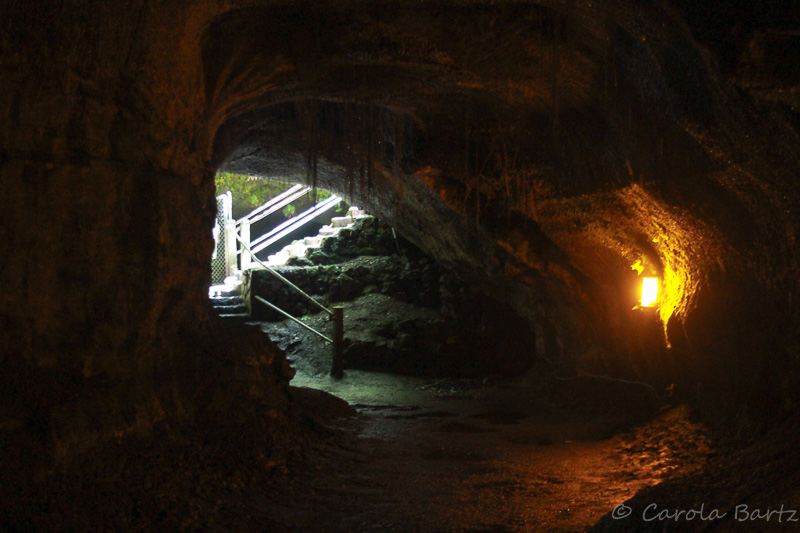 I looked back for a farewell view to always remember this before I ascended the stairs into the lush rain forest of the Big Island. 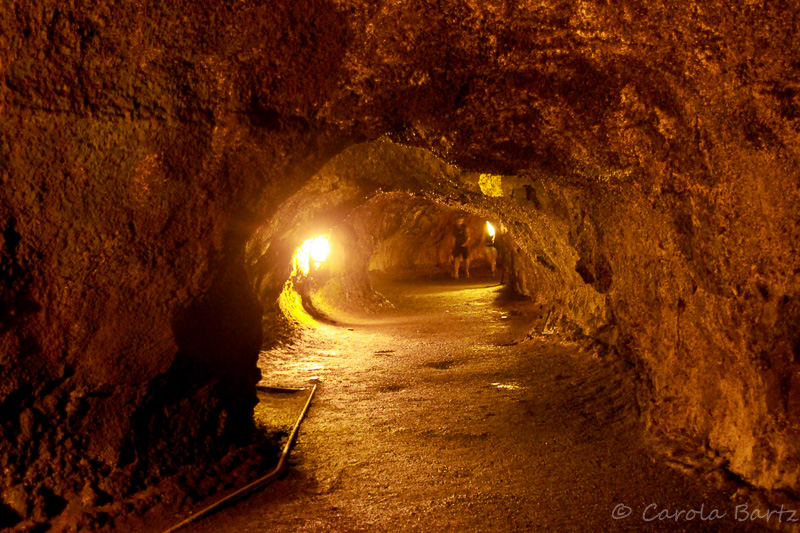 Then you turn around and realize that indeed you were quite a way deep inside the lava. Fascinating. 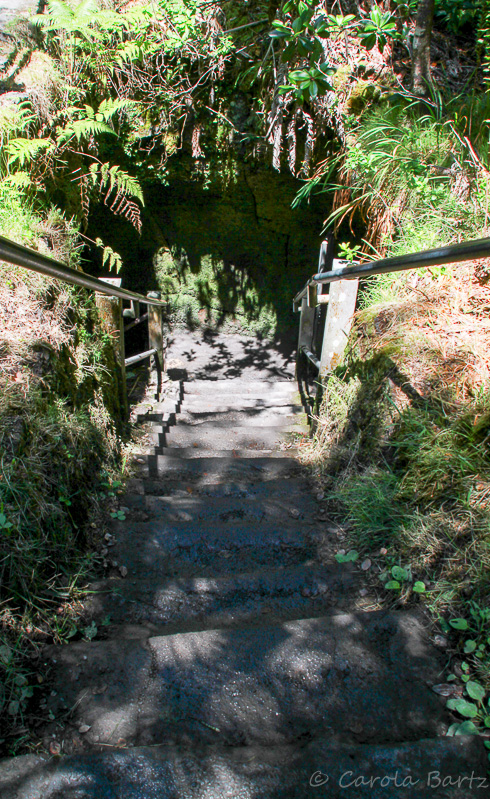 There are quite some fences in here, so I link up to Theresa's wonderful Good Fences.

I can see why it took your breath away -- it took mine away and that was just looking at the photos. That lighting is amazing and you had it spot on when you said "eerie." Very much so. Fascinating look at a place I doubt I'll ever be -- but would like to!

How absolutely amazing.
What an incredible experience - and view.
And thank you. I don't do enclosed spaces well, and would have had some troubles with going into that tube.

Such a peculiar journey.. but i felt a little claustrophobic by just looking at the tunnel and no light in the end...brrr

I ma glad you enjoyed this trip)) Keep on posting!

This looks amazing too Carola. I don't know if I could go in there but it seems well lit. Its amazing the power and force of nature in the earth's core. I enjoyed these posts on the volcano.

What a fascinating place! You got some great photos in what must have been very challenging lighting conditions.

WOW!! Truly amazing!!! Love to do this one day! Amazing photos!!

Hello, these are amazing photos from inside the lava tube. It is a interesting park to visit.

Happy Thursday, enjoy your day and the weekend ahead!

Wow! Awesome photography and what a place ~ thanks!

What a wonderful trip through your lens. That is the only way I would ever go in.

Hello!:) What an amazing experience to actually walk through a tunnel made by boiling lava. Wonderful photos!:)

a mind boggling experience but oh so fascinating! Beautiful photos of the tubes especially the second one!

wow! how very cool! so neat!

this must have been a fascinating tour! I've never been in lava beds - it's amazing to think about hot lava creating these tunnels. You got some really fantastic shots!

This looks like a pretty amazing place to explore and you got some great shots!!

Wow, thanks for sharing.

That is a nice park. You have great photos! Love it. It is cool.

I was inside a lava cave in OR or CA once (very narrow and low) and hard to breathe. I think this one is pretty amazing looking. Nice fences there too. I enjoyed all your photos of this fascinating place.

I'm happy you took these photos so I could see the inside of the lava channel. I'm claustrophobic, so I'm not sure I could have explored in there!