When I showed you the fence in Olompali State Park last week I deliberately left out one part of the fence - it's the same fence in a different area. I want you to look at the very right of the fence - yes, there is a sign. Two signs actually. A brown one and an almost white one. 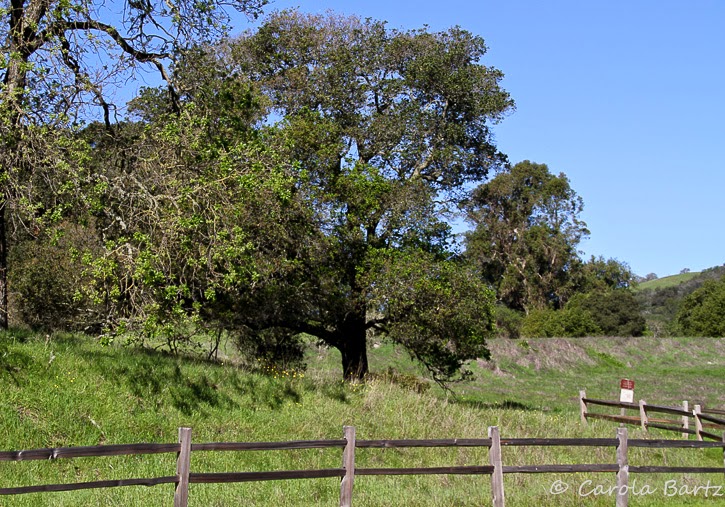 Let's get closer. Those of you familiar with this kind of signs will recognize them. The brown one just tells you not to enter this area in order to protect natural features. That area is closed because they're restoring the habitat. So please don't climb over the fence.

The lower is a bit more severe, a warning that shouldn't be taken lightly. Those of you in the West know what I am talking about. 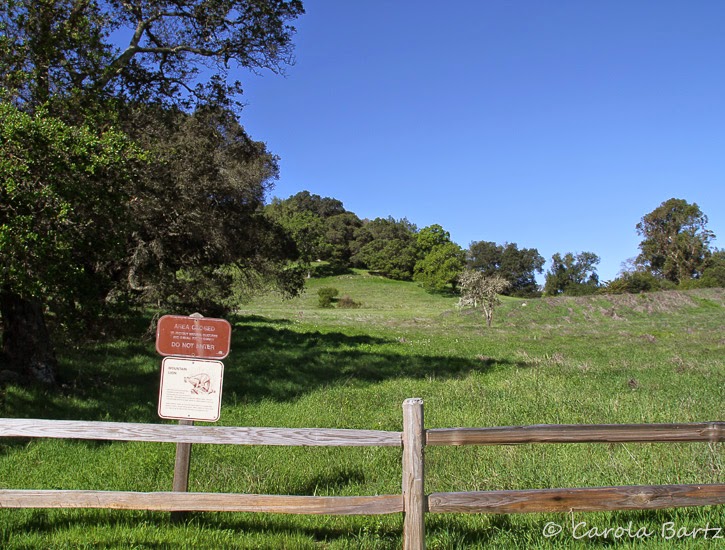 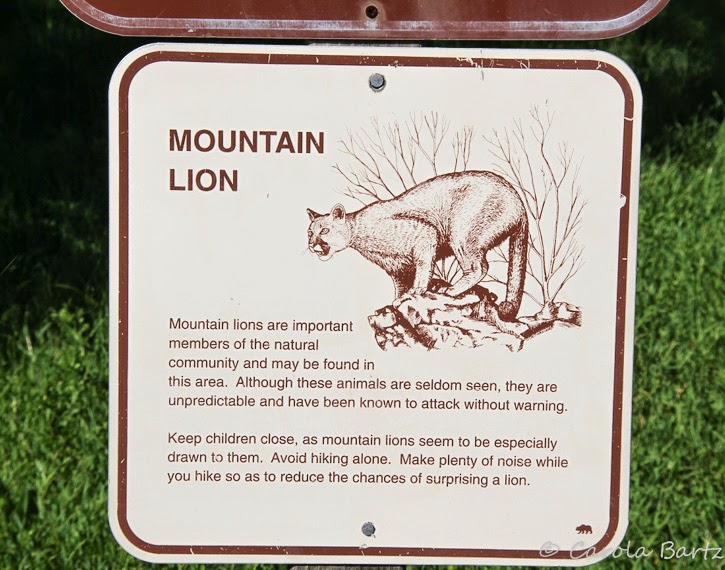 Around where I live these signs are pretty common. We see them in every state park, every part of wilderness. Mountain lions live here. Sometimes they even come into urban areas. A couple years ago a cougar was seen by the security cameras at my husband's company's work site. One was roaming a golf course (it might have been the same one). A few more years ago a mountain lion was seen in the neighborhood where I live now. As they say - where there are deer there is a cougar. At least here in the West.

Notice that the sign advises to avoid hiking alone. Well, I often hike alone. So far I've never seen a cougar - but I'm pretty sure that the cougar has seen me. More than once, probably. I remember a few years ago, when I was hiking in Annadel State Park on my own I suddenly got this really weird feeling - like someone was watching me. The hairs on my back literally raised! When I saw mountain lion scat on the trail before me I knew that I better had to turn around - which I did, and after a couple hundred yards the weird feeling stopped. I'm pretty sure that a cougar had been close by, and it probably was wise to turn around.

I didn't really want to make the acquaintance of these paws. 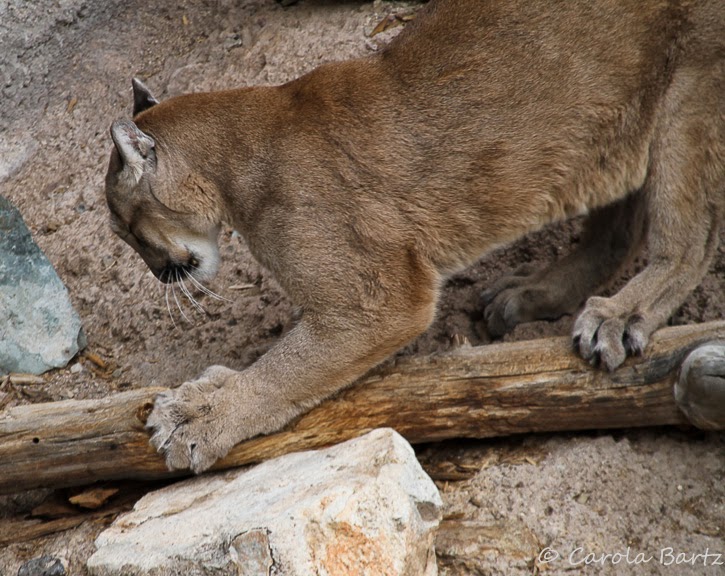 Nor of those teeth. 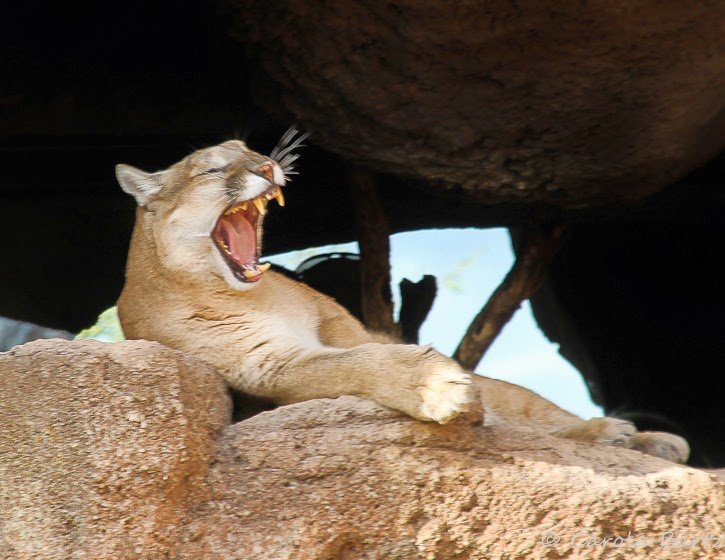 One day I was talking to one of the rangers in the park, asking him how very likely it was to run into a mountain lion. He told me that they are around but usually don't get into the way of humans. I shouldn't tie my shoe under a tree - the cougar might rest up in there (after that I found myself scanning every tree next to the trail). Then he said "Mountain lions are cowards. They usually attack from the back".

Now that put my mind at rest! 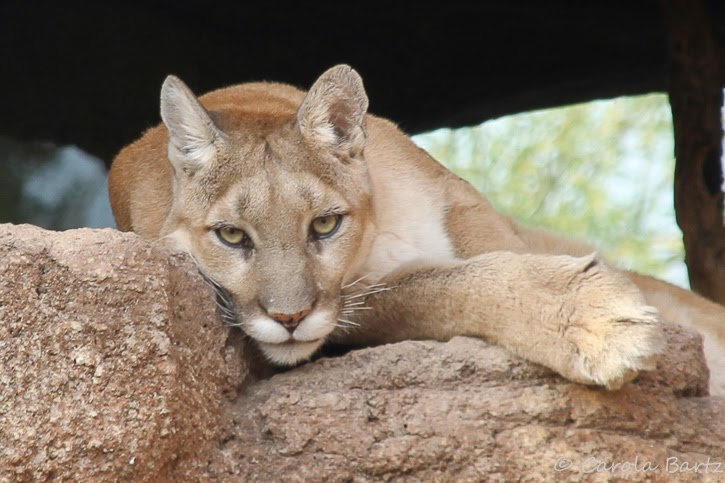 These last three photos I took a few years ago in the Arizona Sonoran Desert  Museum in Tucson.

I'm linking my cougar fence to Theresa's Good Fences over at the Run Around Ranch. 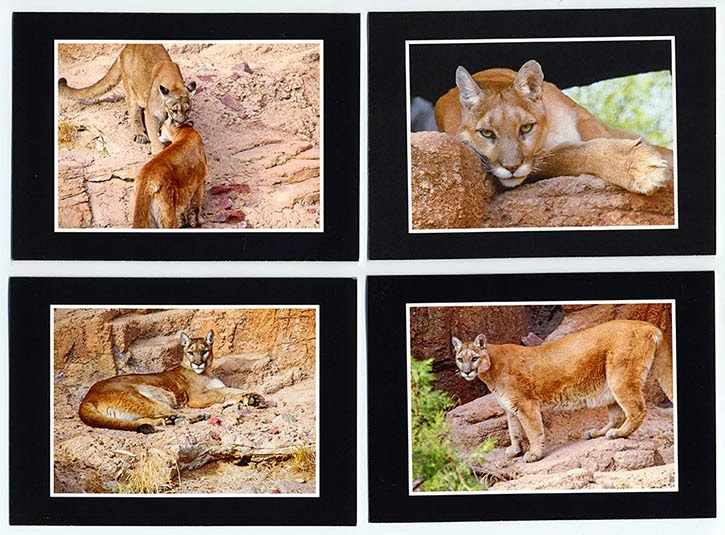 I'm sure attacking from behind is a tactical move - not cowardice. Hopefully there is enough deer and small prey in that area that the lion won't be interested in you!

yeah, i'd relax, too. :) a very pretty area to go hiking, but glad you trust your instincts. :)

The mountain lion is a “coward” line gave me a wince and a laugh all at the same time. We get similar odd messages in my neck-of-the-woods about wandering wolves in the parks.

Nice Kitty Kitty....looks so innocent, doesn't she? My daughter and SIL were hiking at Big Bend and had to escape a bear. Bear, Lion, neither one would be fun for me!

Those animals are beautiful! But they are predators. Thanks for sharing. Very interesting, especially since lynx and wolf are coming back into my area.

I'm sure glad you listened to your internal alarm system and got out of the area. Cougars are beautiful to look at, but I sure wouldn't want to happen upon one. Love the photos!

Right on, you don't want to get in the way of a mountain lion, bob cat or a rattle snake. Nice close up photos.

A very wise idea about making your appearance known while hiking. That's why the Girl Scouts teach their troops to sing songs when hiking! So not to surprise any animals lurking about! A lovely place to hike, but also be alert!

That is scary, but your photos are perfect. Be careful when walking. Enjoyed your post.

Yikes! I'd be looking over my shoulder and up in the trees every few seconds I think. Great photos of these beautiful creatures though. You be careful on your lone walks!

Hi Carola,
Incredible shots, especially of the Mountain Lion. I have only seen Bob Cats in the wild, but these guys are much bigger and quite beautiful.
I guess the log is the nail-file for these guys, eh? :)
Have a Beautiful Day!
Peace :)

Beautiful animals. But yes, I am glad that you trust your instincts.
We have no such predators here. Snakes we do have to keep an eye out for - and some of the techniques are the same. Make noise. Watch. And walk away.

Nice fence and some good warning signs. Yes, I am aware of Cougars as we have then in our mountains here although I've never seen one but my brothers have. I do believe I heard one howling one night up in the mountains, it was creepy. They are gorgeous cats though.

I am so pleased that mountain lions are doing well in your part of the country. It's a good sign that all is well with the environment. Lovely photos too.

I always hike alone, these signs would bum me out, but good advice!

Such a beautiful looking animal. I would love to see one on a hike but not too close!

I, too, live in mountain lion country, and I often hike alone. I've never been confronted by a lion, though I've seen a couple when I'm in the car (at dusk). I've heard their distinctive scream (childlike), and it is chill-inducing. My son and family live in an area where there is actually a neighborhood Facebook page that traces where people have last spotted a lion roaming.

I think that normal mountain lions avoid confrontation whenever they can. I photograph our mountain lions with trail cameras, and I know for a fact that I've been watched by one at close range. I was checking one of my trail cameras. It photographed me leaving after checking it. Then, about 30 seconds later, a lion hopped out of the brush near the camera and started sniffing everything that I'd touched. He then started walking in the same direction that I'd gone. I never saw him that day but I did get chills when I saw the photos the next time I checked that camera!!!!

yeah that's real comforting to know they attack from the back.

I wouldn't want to meet up with one either. please be careful.