Back at the Lake 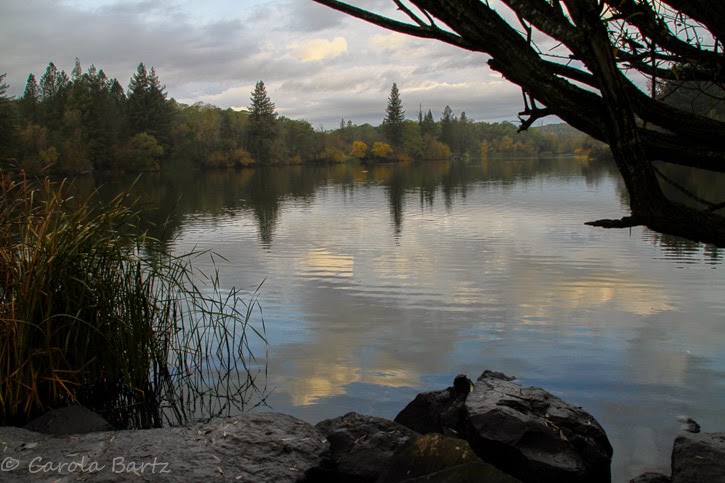 It has been months since I was at the lake the last time - it must have been some time in summer - I can't even remember. I'm not quite sure why I never went after that. My priority in the morning has been my workout since I felt I really have to do something for my health and stay at least a bit in shape (round is a shape, right?). Then at the end of September my parks pass expired and I never got around to buy a new one - until a couple weeks ago, when I finally renewed online and got the new pass in the mail. 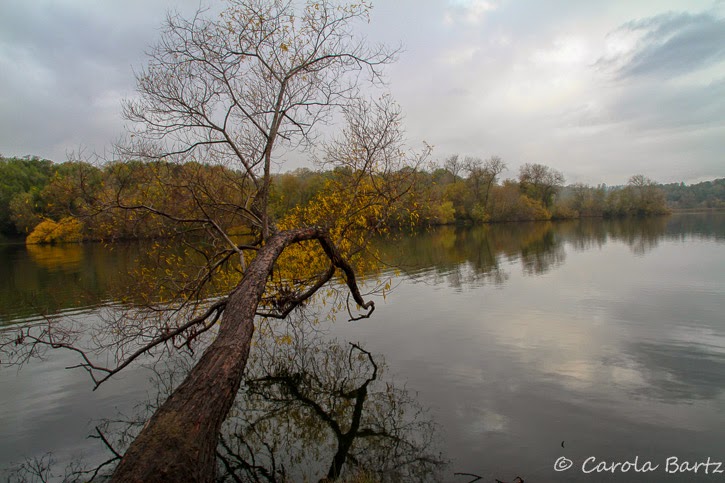 I can't express in words how beautiful it was to be back at the lake. There were still a few remaining signs of autumn, but it is obvious that we're heading into winter by now. 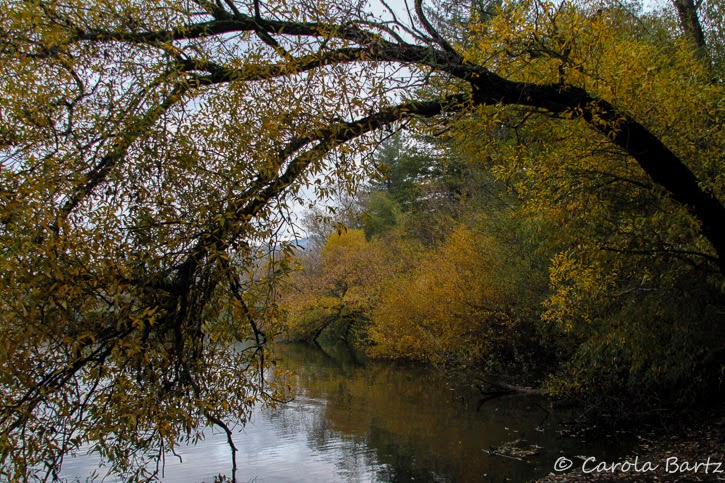 Some trees though still were fiercely red which almost glowed on this grey morning while the hill behind them simply disappeared in the fog. 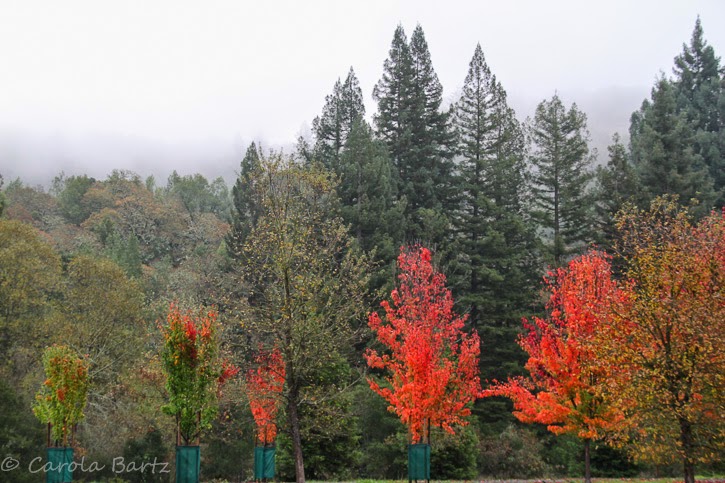 I was looking for my little friends, the black-crowned night herons, but only found one. It was hidden in the leaves hanging in the water from a downed tree. Can you see it? 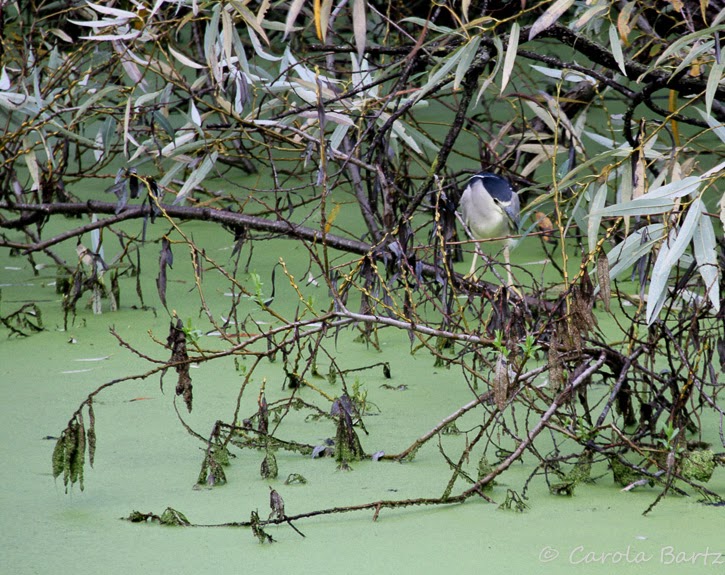 These little guys are so cute, I love them! It was a bit disappointing that I didn't see more of them. Instead I saw lots of other beautiful things - like these wild blackberry leaves. This photo is straight out of the camera. Isn't the color amazing? 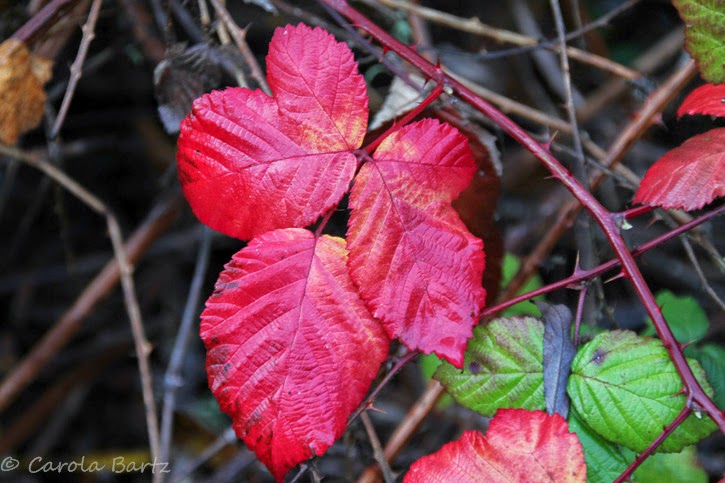 There were fungi at a tree stump and beautifully colored leaves at the edge of the lake. 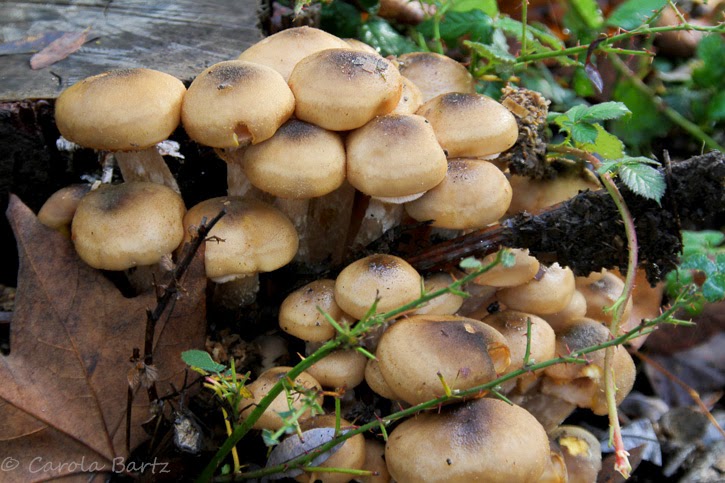 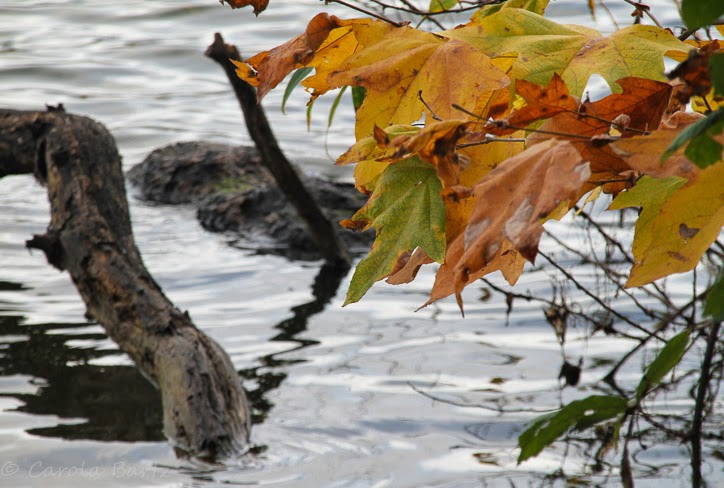 Suddenly I heard the call of a red-shouldered hawk. First, he was chased by two crows, but then he took off into a different direction. It took me some time to find him again when he was perched high on this post. Unfortunately he flew away before I could take better pictures of him. When he was gone I looked around a bit - I had left the path by then and was in some kind of wild and open space. I noticed the buckeyes lying on the ground, most of them munched upon by wildlife, but some still complete. They are so pretty. Thank you, hawk, for leading me to them! 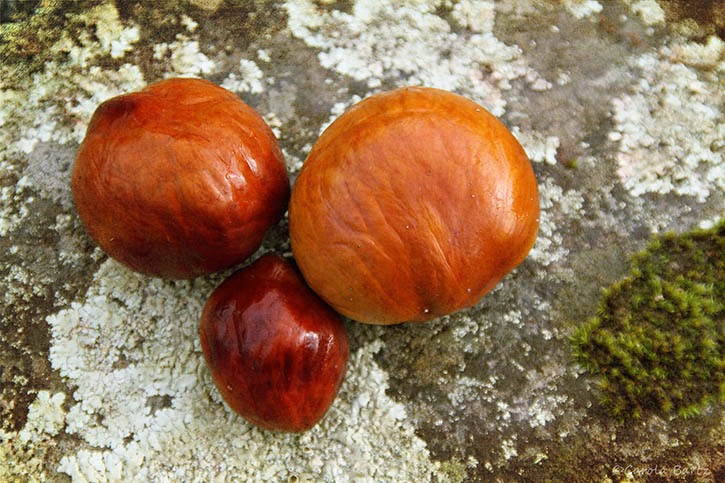 This one is for Texture Tuesday.
Layered with kk_colton in soft light at 100%. Texture brushed from buckeyes. Copied and blended in color burn at 61%; layer mask disabled. Level adjustment on texture only. 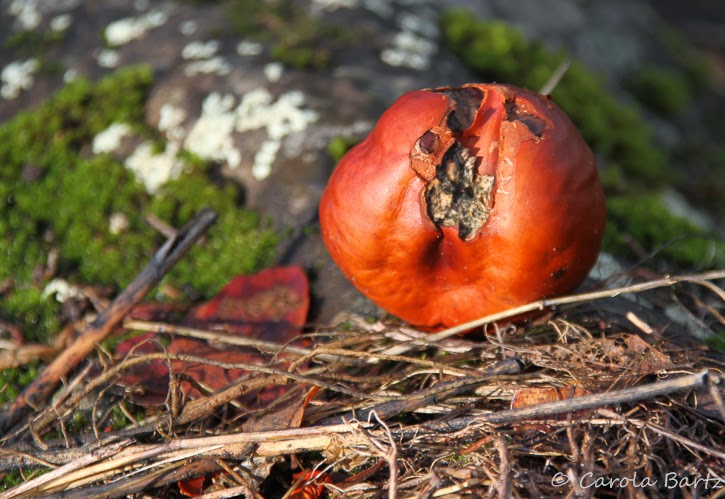 After almost two hours at the lake, the fog was slowly burning off, but it still stayed grey. The sun peeked through the clouds every now and then. It was so pretty - and I decided that I need to change my morning priorities a bit. Workout is important - but perhaps I can skip one morning a week and walk around the lake instead. The workout keeps me healthy, but the lake feeds my soul. 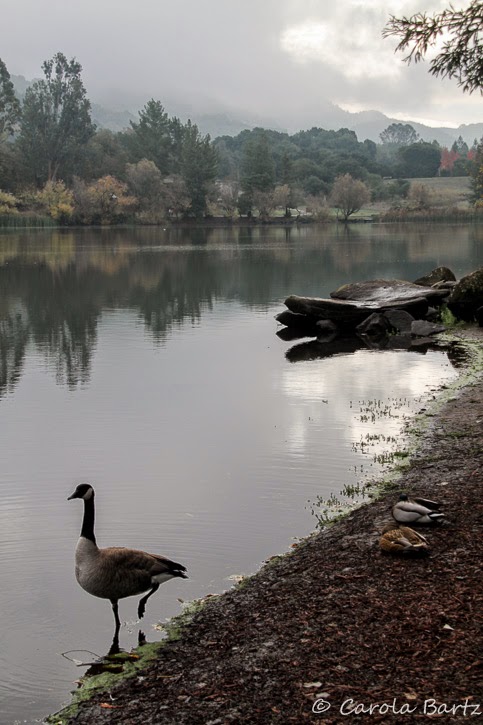 This is the view of the lake from exactly the same spot as the first picture, two hours and 15 minutes later. Quite the difference. 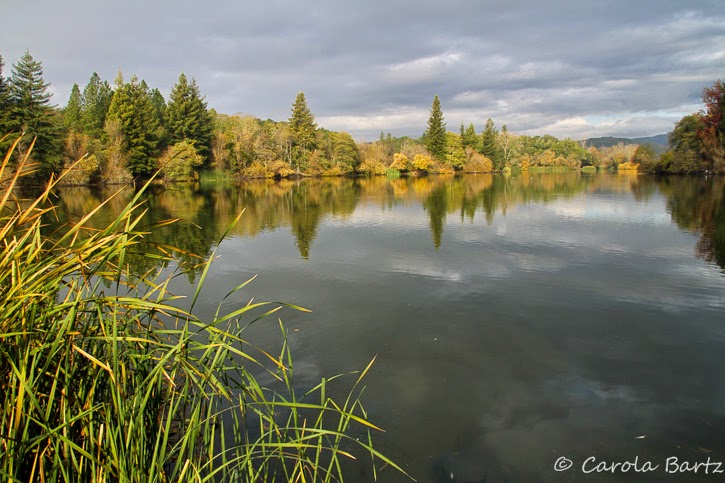 Beautiful nature shots. The hawk is awesome. I love watching them soar but also love watching when little birds try to chase them away to protect their territory. A walk around the lake is a great alternative to a daily workout. The scenery can't be beat!

Lovely set of images - and gorgeous fall color. Love the image with the hawk!

Soul balm indeed.
Thank you so much.
These stunning photos have allowed me to breathe, and relaxed the shoulders I didn't realise I had locked in tense mode.

These are simply stunning, that second image with the perspective oh WOW gorgeous.

That is quite a resource for happiness to have at your disposal.
Is it safe to hike alone? And do you have to travel far to get there? Great images.

You captured the simple beauty of this place, very well.

Thank you for sharing these. I don't get out to the Lake nearly as much as I used to, so I greatly appreciate these images. Cheers!--Michele at Sweet Leaf

they are all beautiful, love #2 and the last one has gorgeous light.

Spectacular scenery. The one with the goose could be a beautiful print framed.

I loved walking around the lake with you, seeing what you saw......everything so peaceful and beautiful ! Thanks for sharing :)

Beautiful series of photos. My favorite os the first. The colors are just wonderful.

Simply gorgeous! You capture everything so beautifully ;o) Hugs ;o)