Made in Germany 40 - Exiting the Castle 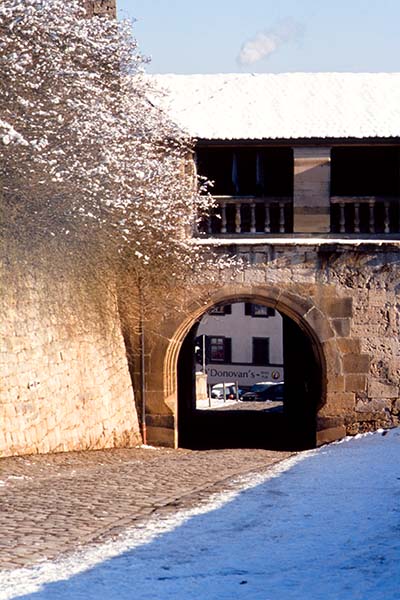 Tübingen in the snow - some winters we had lots of snow, some winters not so much. We also had very cold winters when the River Neckar would freeze over so that people could walk on there, ice-skate and enjoy a mug of Glühwein (mulled wine - the booth was right on the ice). We certainly made the best of the situation.
Tübingen's castle is right above the medieval city center and its exit, as you see her, leads right to the Irish Pub! The castle houses a museum and some departments of its university, the more "exotic" ones that don't draw big crowds (= students) like ethnology or anthropology. It was quite a climb up there on cobblestone streets (better not wear heels here), but there was also a small path that led to the Schloßberg (castle hill) right behind it, at which end I lived, where it met the forest. It was a lovely way to enter town on a Saturday morning.
This is my last photo in the "Made in Germany" series. It has been in this location for 40 weeks, and I think now by the end of the year is a good time to say farewell to it. This doesn't mean that there won't be anything German on my blog anymore - German(y) and I belong together, and I will continue to share my native country with you, but not quite as regularly as I used to.
Thank you for following "Made in Germany", commenting and sharing your memories of Germany or something German. I really enjoyed writing and posting about Germany every Monday. 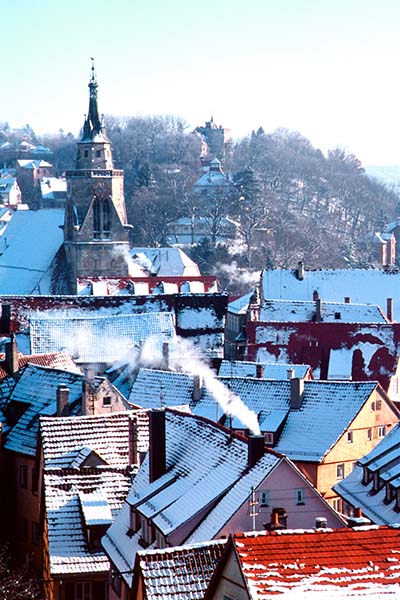 View from the castle
Posted by Carola Bartz at 1:34 PM

Email ThisBlogThis!Share to TwitterShare to FacebookShare to Pinterest
Labels: Germany, Made in Germany, Tübingen, winter

Carola, I have really loved your German images! I did not spend a lot of time in Germany, but I was there and I think that makes it even more fun to see and recognize areas that bring back fond memories!! Thank you!!

I love the last photo, Carola. There's something about roofs that I really like.
I hope you had a good Christmas, and I wish you all the best for the coming year.
K

What a lovely area. The snow roof shot is amazing.

Carola, I have so enjoyed this series. You a such a talented photographer. :)

I love "View from the Castle" with its delicate dusting of snow. I've never been to Germany and at this point in my life it doesn't seem likely that I ever will. I've really enjoyed being able to go there through your blog and see it through your eyes.

I've enjoyed the visuals of Germany and the information you shared. This type of traveling is great, no plane ticket to buy, no packing to do - just me and my computer and a morning cup of coffee :-)