Made in Germany 37 - Christmas in Erfurt 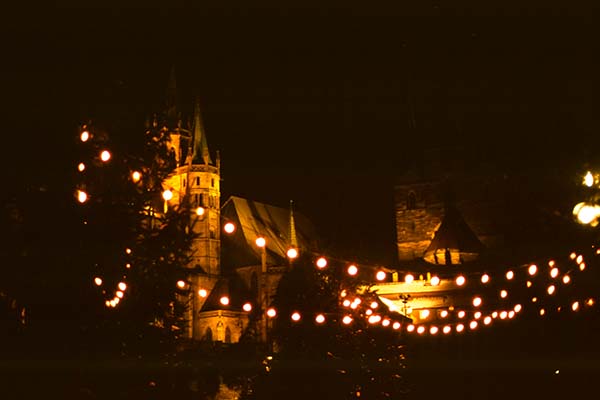 Baby, it's cold outside!
And it was.
This photo of the Dom in Erfurt (East Germany) was taken in December 1996, one of the coldest winter in Germany. Temperature's lows were at -25 C (-13 F). The Geek and I were dating at that time, and we had gone to Erfurt for me to meet his mom who was then living there. We both loved the light at the Dom and decided to venture outside despite the cold and take some photos.
We stayed there for about 20 minutes and took pictures - then our fingers were numb and the batteries in our cameras weak. Time to go home and warm up with some hot chocolate and rum.
The weather stayed like this for about two or three weeks until it "warmed up" a little bit. When we left Erfurt after a couple of days, the windshield of our car froze over repeatedly and we had to stop every 10 kilometers or so (6 miles) to clean it up. Such a drag!!! But we were young and very much in love - for us it was an adventure.
Posted by Carola Bartz at 1:00 AM

Email ThisBlogThis!Share to TwitterShare to FacebookShare to Pinterest
Labels: Germany, Made in Germany, memories, winter

That's the negative part... the cold :-) but I have tried night photography only a couple of times.

I have recently discovered Rammstein again and it is fun as I apparently still remember my school German lessons. Nice to understand what they are singing. I have discovered that I kind of like all sorts of music and that is more true today than when I was younger.

Beautiful photo. Sounds like you had a troublesome journey home afterwards! I think I'd have had double rum in my cocoa after that!

wow,Carola, what great memories and aren't you glad you ventured out in the cold to get the pics? I can't even imagine that kind of cold!!

adventure for sure! amazing what you do for love! (step into the frosty, chilly weather, for one!)...
loving your stories from Germany.

Germany has such nice Christmas nights...

Looks like a magic castle from a fairy tale.

we really loved germany, i hope to get back there soonish.
but perhaps in warmer times. -25! yikes